Our focus areas were:

All of these areas have been eagerly expected by several customers and required huge effort on SAP GUI side. However, in addition to these topics we could also work on a couple of other smaller topics that are explained below.

SAP GUI for Windows 7.70 was created with Microsoft Visual Studio 2019 which is in mainstream support by Microsoft until 9th of April 2024 (see also https://docs.microsoft.com/de-de/lifecycle/products/visual-studio-2019).

The chart below shows the current dates (on 27th of January 2019) for the lifecycle of SAP GUI for Windows releases 7.50 (already out of support) up to 7.70. For the latest information always refer to SAP Note 147519.

As you can see in the image above, there is an overlap of support durations for releases 7.60 and 7.70 of about 14 months. During this timeframe patches for both releases will be supplied normally.

The successor to the Belize theme is the Quartz (Fiori 3.0) theme. For the first time we also offer a dark version of the theme that can be used by users who prefer a dark background.

There are four Quartz Themes (see also image above):

When you install SAP GUI for Windows 7.70, Quartz is the default theme and SAP GUI will choose either the light or the dark version depending on your Windows settings. Of course, we do not override a previous setting – you can continue using SAP GUI with the theme of your choice. We also did not remove any old themes in release 7.70.

Some of the highlights of the Quartz Themes:

The feedback we have received so far on the Quartz Themes (also from the Beta program that we ran) is much better than the feedback related to Belize. However, one should keep in mind these SAP Notes when using Quartz Dark:

For all these reasons as of release 7.70 we have integrated the Microsoft WebView2 control (Edge based on Chromium) as an alternative to the Internet Explorer Control (see SAP Note 2913405 for more information). In order to allow a smooth patching and update process we have decided not to deploy the component ourselves – therefore, WebView2 is not contained in the SAP GUI installation. To use the new version of the HTML Control, you need to install the Microsoft WebView2 control (https://developer.microsoft.com/en-US/microsoft-edge/webview2/#download-section) separately. Updates to the component are then received via the regular Microsoft channels.

Since the HTML Control based on WebView2 is very new and presently has some functional restrictions (see below), we decided to keep the Internet Explorer Control as the default browser control in SAP GUI for Windows for now. However, once installed, you can select “Edge (based on Chromium)” via a setting in SAP GUI options dialog: 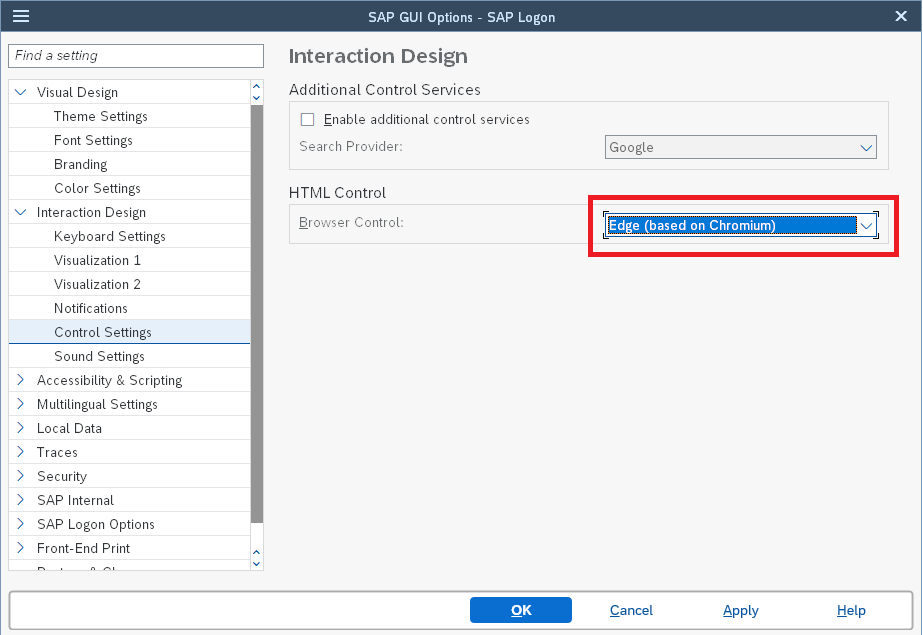 Once the setting is activated, the HTML Control will use the WebView2 Control and therefore offer a modern browsing experience with all the advantages of a current browser: 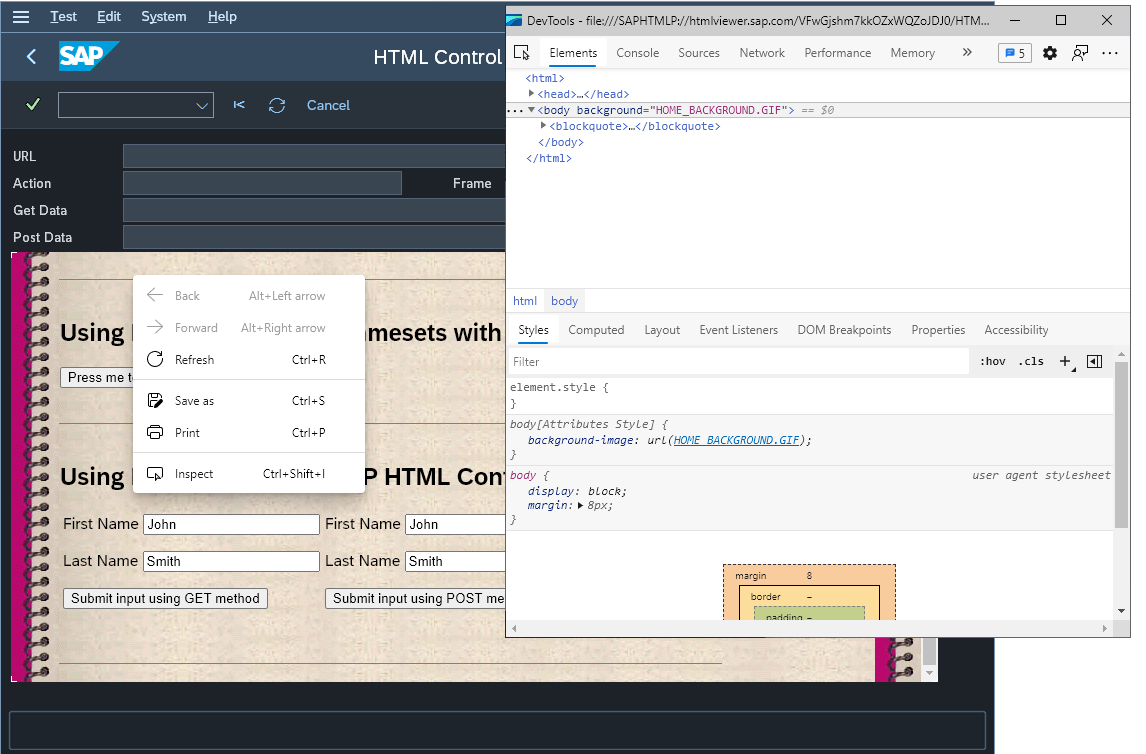 To allow a “mixed-mode” while applications still using old HTML content migrate to something new, we have introduced the feature explained in SAP Note 2957665: The administrator can define a fallback to Internet Explorer for certain systems / transactions when WebView2 is configured to be the default browser control.

Up to release 7.60 these controls are only available as 32bit versions. Especially with the stronger usage of Microsoft Office 64bit editions this has become a challenge, because 32bit controls cannot be easily invoked from a 64bit process.

As of release 7.70 we offer 64bit versions (both non-Unicode as well as Unicode) of these controls which can be installed in parallel to the 32bit versions. With this, scripts using these controls can also be run from 64bit processes like Microsoft Office 64bit. To benefit from this, select the appropriate installation component to be part of your installation package. See also SAP Note 2724656. 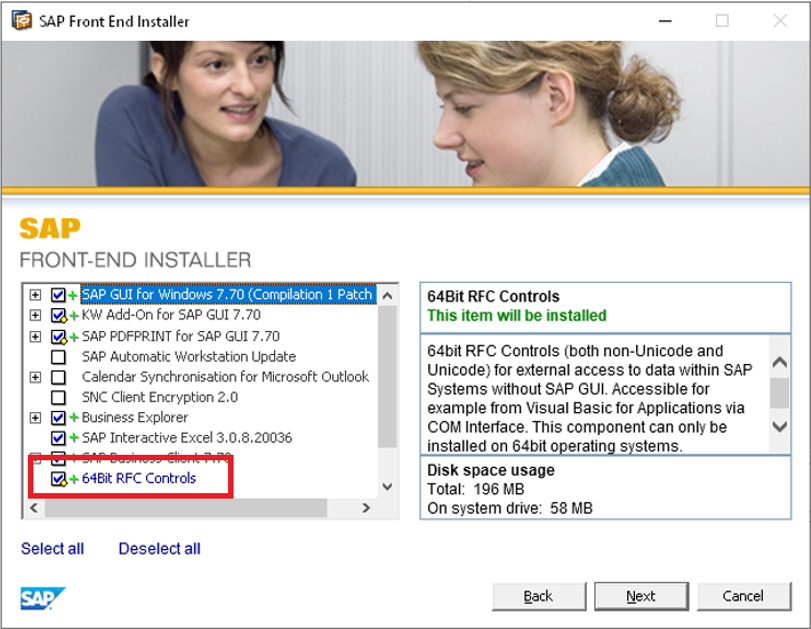 Up to release 7.60 SAP GUI supports scaling using the scaling settings of the primary monitor only. For other monitors we let the operating system scale the SAP GUI window. This has some drawbacks for example when SAP GUI is embedded in an application which is multi-monitor scaling aware. In case of SAP Business Client this just leads to a blurry display of SAP GUI, but when embedded in Microsoft Internet Explorer the dimensions of SAP GUI inside Internet Explorer are determined incorrectly. See SAP Note 2541592 for more information.

As of release 7.70 multi-monitor scaling can be activated in the SAP GUI options dialog so that the issues with multiple monitor setups using different scaling settings are solved. The feature can be activated for Belize and Quartz themes if a sufficiently new Windows version is used via this setting: 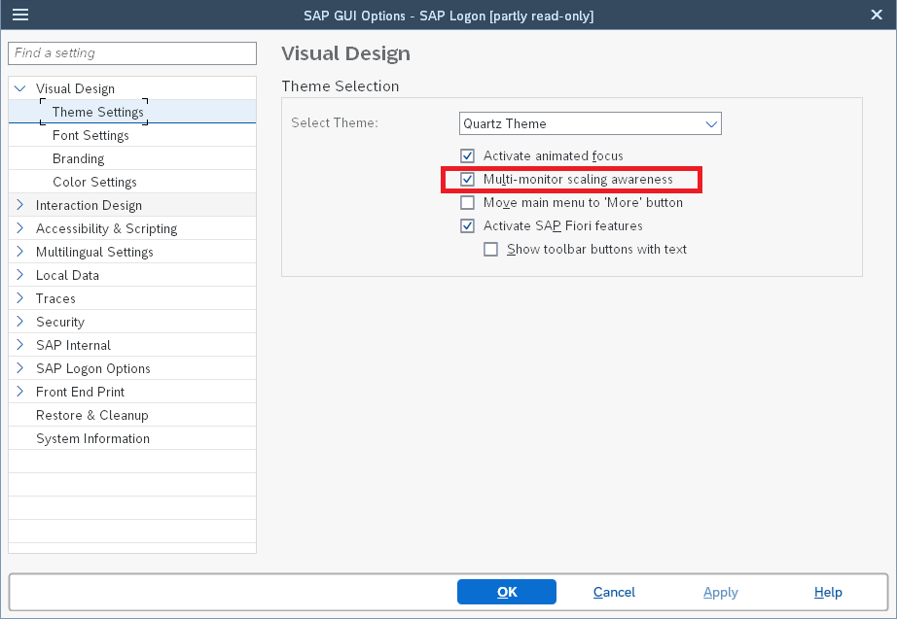 Multi Monitor Scaling is an extremely complex topic that required a multitude of changes in SAP GUI and that will certainly require further changes – the topic may also require adjustments in external ActiveX components that you embed in SAP GUI. SAP Note 2985351 contains further information on this topic.

Another frequent issue in the context of using SAP GUI on devices with high resolutions is an incorrect size of cells in splitter containers. This typically leads to buttons not being completely displayed (cut off). The root cause of these issues is explained in SAP Note 2767962 – the affected ABAP applications are typically defining the height (or width) of the cells in the splitter container without taking the scaling into account.

The maximum width of a dialog box (popup) is limited by the vertical resolution of the display. When an application inserts many buttons or wide buttons in the application toolbar (footer) of a dialog box or the resolution is low or the used font size is big, this sometimes exceeds the maximum width. In SAP GUI releases up to release 7.60, such buttons could not be displayed.

Therefore, as of SAP GUI for Windows 7.70 and starting with Belize themes, SAP GUI puts all buttons which do not fit into the dialog box into an overflow button. If needed, the footer of the dialog box displays a button “…” that offers a context menu containing all buttons for which not enough space was available. This ensures that all applications, even those with many wide buttons, can be properly used.

Overflow for buttons in dialog boxes

The ALV Grid control may consist out of a toolbar area, title area, column header and table area. If you move the focus to the ALV Grid control via keyboard, in SAP GUI for Windows the focus by default is set to the table area. This is since in many cases the user first wants to do something in the table area (like selecting a column) before using the buttons in the toolbar area (like for sorting the selected column). However, in case a different behavior is desired, this can now be achieved by setting a newly introduced registry value. You can decide whether the focus shall first move to the table area (default), to the toolbar area (value = 1) or column header (value = 2).
See SAP Note 2973107 for more information.

In SAP Signature Theme the tree control shows different background colors for the first four hierarchical levels. In newer themes this functionality was removed by design, because it reduces contrast of text to background and the idea of the newer SAP GUI themes was having a display with fewer visual hierarchies. However, the different colors for tree levels are considered helpful by some users, because one can more easily understand on which level an item / node in the tree is located.

Therefore, as of SAP GUI for Windows 7.70, we have introduced different background colors to differentiate tree control hierarchical levels also in newer SAP GUI themes starting with Blue Crystal theme (which excludes the Corbu theme). This functionality is inactive by default and can be activated as explained in SAP Note 2943146. For SAP Signature Theme the functionality remains active by default and cannot be deactivated. Please note that in High Contrast themes this functionality is not supported, because the contrast wouldn’t be enough to meet the minimum contrast requirements.

SAP GUI scripting offers a dialog for recording and replaying scripts. This dialog had several functional and usability issues. Therefore, it has been reworked in release 7.70 and the following changes were applied:

This time we haven’t removed any visual theme, but have just cleaned-up the theme selection and removed a rarely used legacy component that has a functional alternative:

We hope that release 7.70 will live up to your and our expectations – especially since it adds very important and long-expected new features. Our experiences from the Beta Program and our SAP internal roll-out are very encouraging, but of course some of the major new features listed above will certainly need our attention during the next couple of patches. We will completely focus on closing remaining gaps and fixing issues you might find for the next months.