Azure DevOps is a powerful tool to organize development tasks of an any project. In addition, there is the pipeline tool available, which allows you to build continuous integration and continuous delivery pipelines. CI/CD Pipelines help you to automate and accelerate the deployment of new developed features. This blog post will give an introduction on how to use Azure DevOps to build pipelines that continuously deploy new features to SAP Cloud Foundry.

To build the scenario on your own, you need trial accounts on Azure as well as on SAP Cloud Platform. Furthermore, you need any git repository. In this blog post the Git repository from GitHub is used, but any other Git repository is possible as well. In summary, you could use the following setup:

Within SAP Cloud Platform, we need to setup two spaces as target for our deployment. Therefore, you need to navigate to section ‘Spaces’ in the menu tree and then create two spaces. Important is to remember the names (‘dev’ and ‘prd’) of the just created spaces as they will be the targets of our deployment from Azure.

After login to Azure, you need two steps to create a CI/CD pipeline. In the first step you create the build-pipeline, which is responsible to pull the application from the git repository, doing some testing and finally builds the application. In the second step you create a release pipeline which deploys the built application in the SAP Cloud Foundry spaces you have created in the previous step.

We set up a Build-Pipeline that will be triggered after every commit to our Git master branch. After triggering the pipeline pulls the application from the Git repository and builds a multi-target-application which later can be used for deployment to SAP Cloud Foundry. To configure the build-pipeline, follow the steps coming next:

To test the configured pipeline, we just need to change our application and push those changes on the master branch of our git repository. Immediately after the commit you will see in menu item ‘Pipelines’ that a new build has started. The list item also displays the commit message that has triggered the build. If you click on the item, you can get detailed information about the build and can view logs.

Once the build is finished, change to menu item ‘Releases’ and you will see that already a new release has started, since we checked the property that a new release will be started immediately after a new build has been created.

Once the deployment has completed you will see the status ‘Succeeded’ within the dev tile and now the productive stage is waiting for approval. Here you have the option to directly approve the deployment to production or do it sometime later after you have confirmed functionality on dev stage. 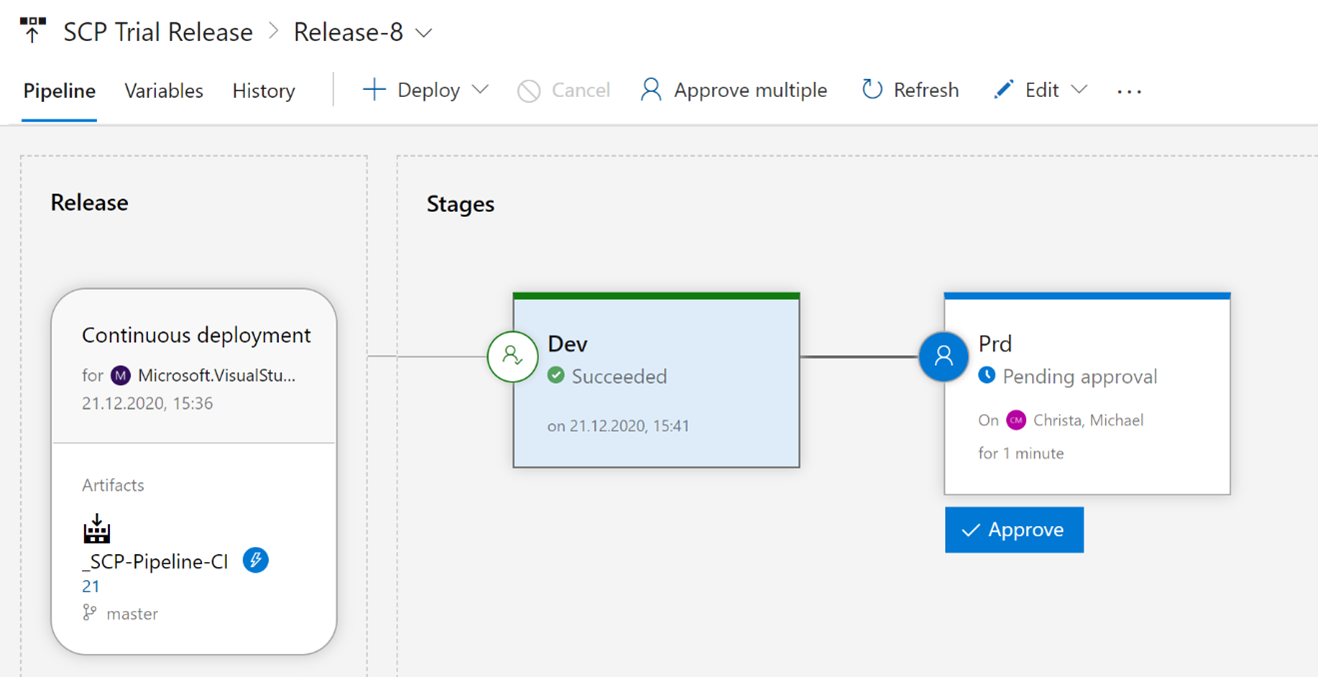 To verify the deployment of your application, change back to SAP Cloud Platform and navigate to the dev space. In here, we see the just deployed application ‘tinyapp’ which is in state ‘Started’ and confirms that the deployment was successful.

In this blogs post, I gave an introduction on how Azure DevOps can be used to build a CI/CD Pipeline with SAP Cloud Platform. The given example is a very minimalistic approach that requires further tasks like automatic testing for a productive usage. However, the example is a proof of concept that integration of SAP Cloud Platform into Azure DevOps works and is configurable in few steps. Since most of the time, we do not have stand-alone SAP Cloud applications as they relate to SAP systems on-premises, my next research will be how we can integrate them into Azure DevOps. If it is also possible to integrate SAP on-premises systems to Azure DevOps, we get a powerful and flexible tool to manage our SAP application lifecycle.

Michael Christa is SAP Consultant at Q_PERIOR focusing on technology and innovation. His professional interests are developing end-to-end SAPUI5 applications as well as working with the SAP Cloud Platform. 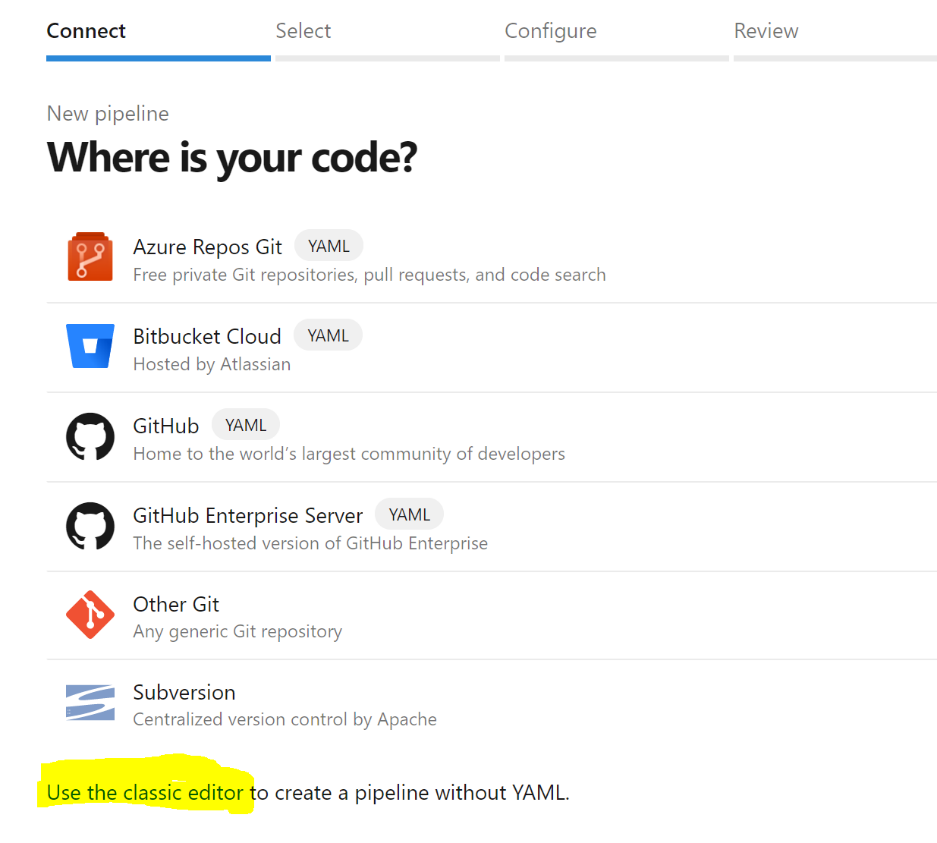 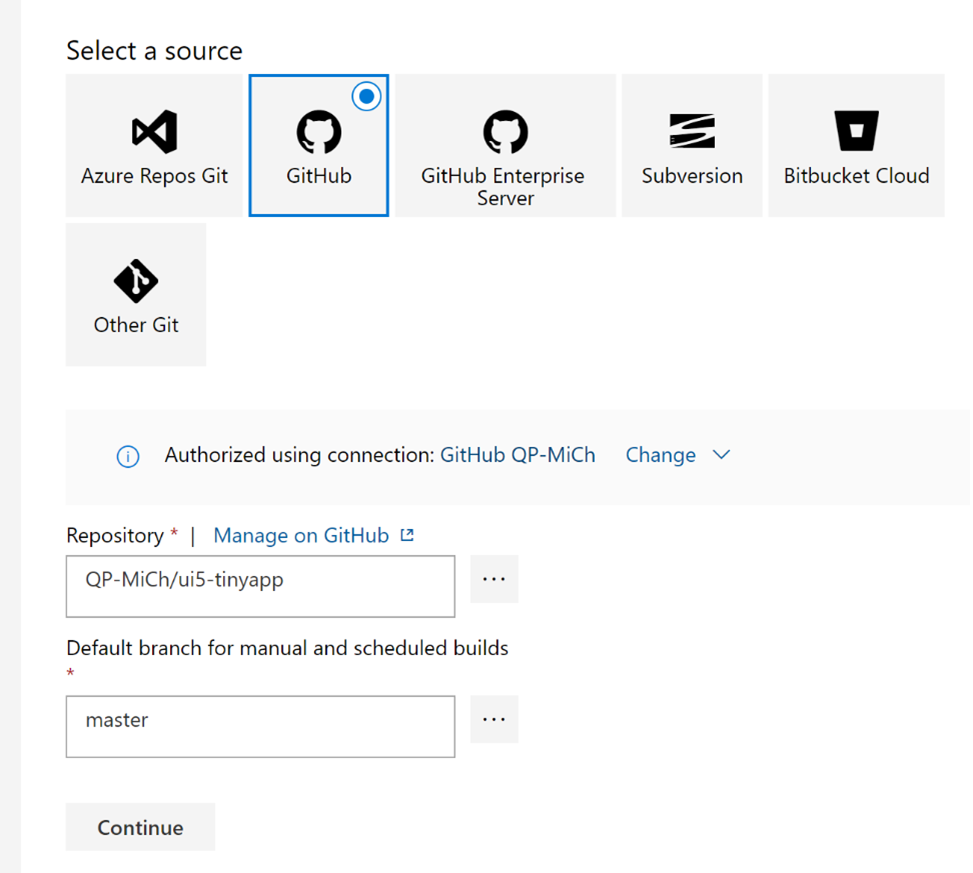 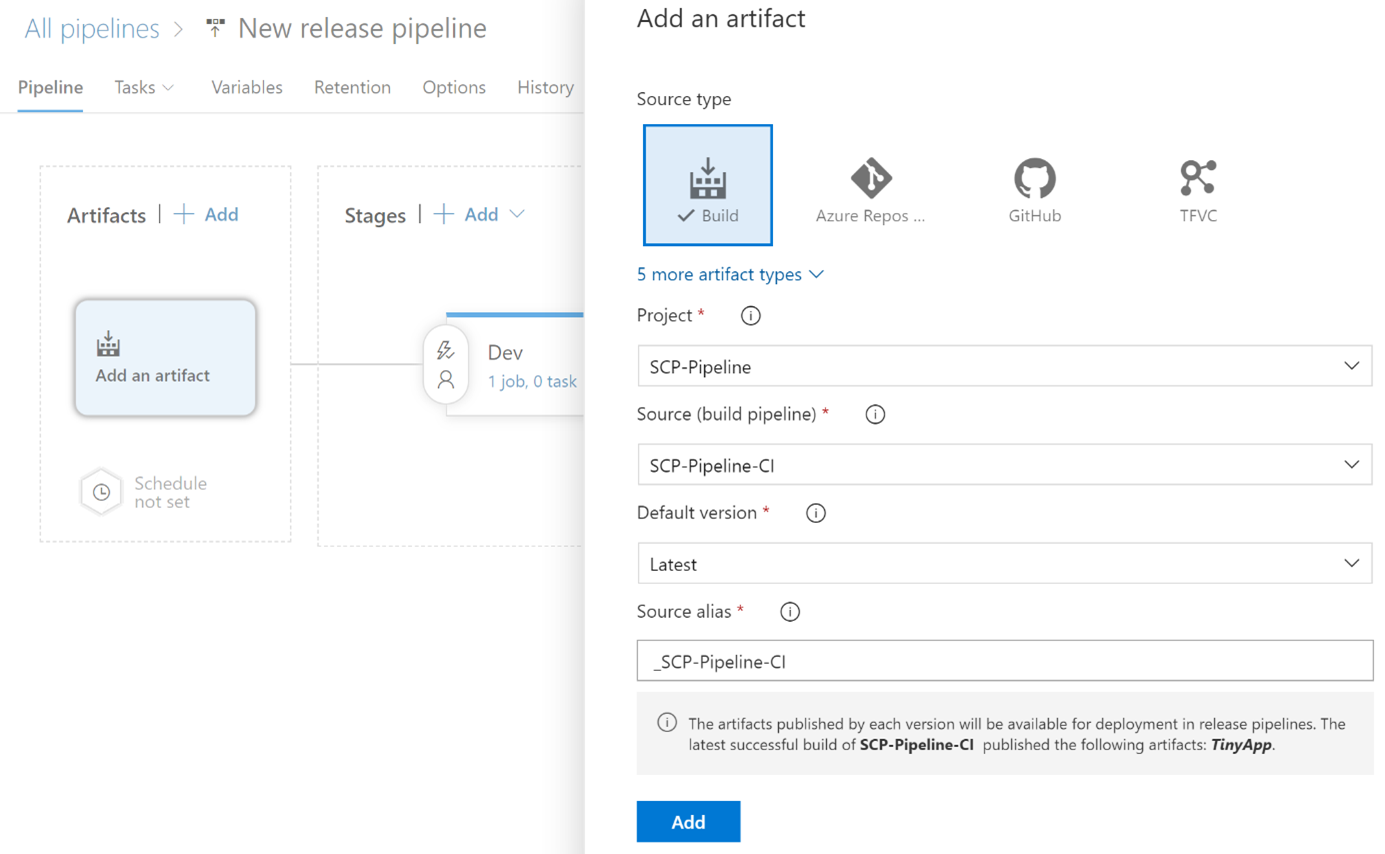 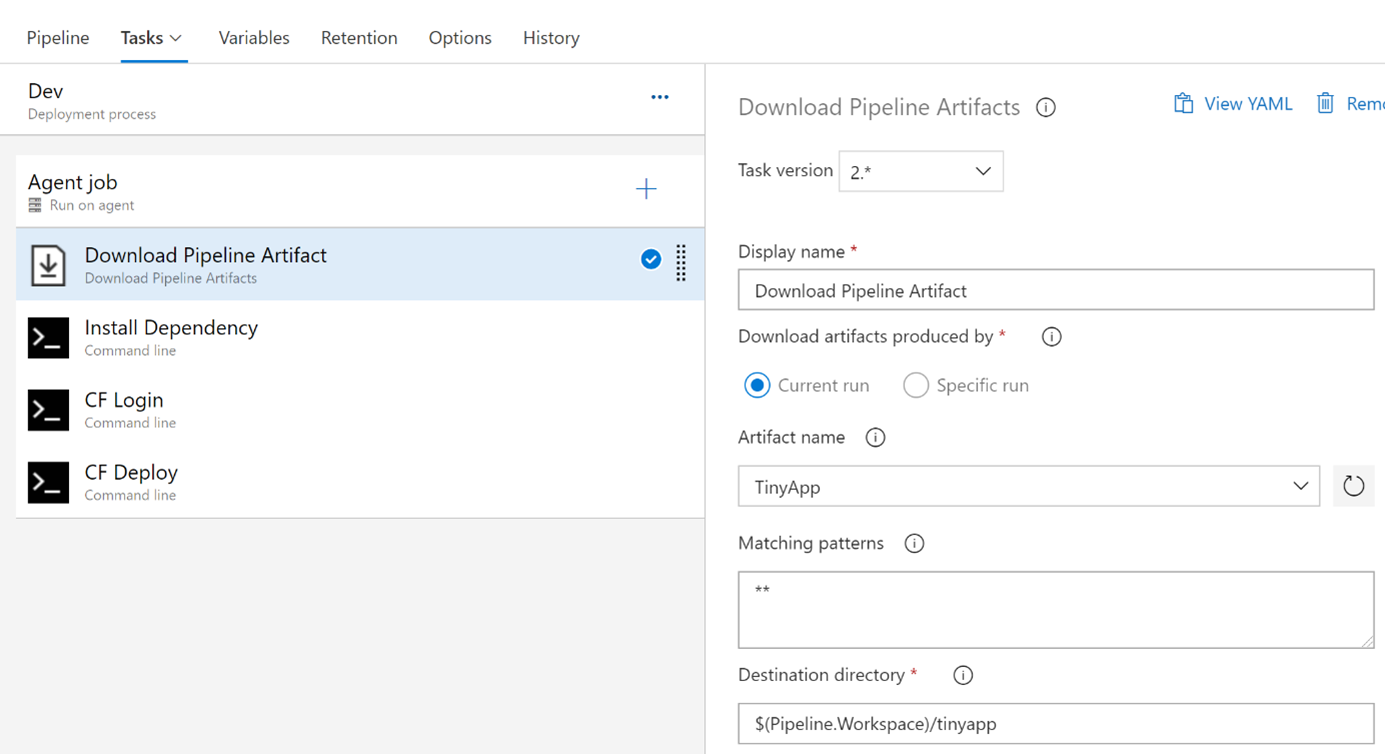 Any idea on how to configure the deployment of the built application to SAP on-prem system?

There is no official documentation on it. My approach would be to use project piper ( https://www.project-piper.io/scenarios/upload-to-transportrequest/Readme/ since it has standardized interfaces to the abap system. Then publish the project piper system to azure devops and control it from there. Microsoft has announced at DSAG last year, that they will integrate functionalities of project piper into azure devops soon.

Another approach would be to debug the deployment process. There must be an OData-API which WebIDE as well as project piper uses. If the OData URL for deployment is known, the URL can be published to Azure DevOps, e.g. via SAP BTP API Management, and used from there.

Hope this helps to find a solution.

Another approach would be to use a Cloud Connector as a reverse proxy to Azure DevOps but never set this case up.

I am working on this setup, SAP BTP->AzureDevops->CloudConnector->Solman(charm).

Did you get chance to setup Azure DevOps with cloud connector, if yes, would you please provide few more details and guidelines,

indeed I did. I should write another blog post how to achieve this. Here some hints:

Within Azure DevOps, you can run your steps on different so called agents. This can be either a cloud system hosted by azure or you can install a agent on a system in your internal system landscape. In the following screenshot, you see on the right side, that you can select private agents:

In order to use a private agent, you have to set them up. Therfore, go to your project settings and click on agent-pools. Here, you will find a button to create a new agent. Once you click on it, you get a detailled instruction how to set them up on your On-Premises system.

After installation on your On-Premises system, the agent works like a reverse proxy and connects to your Azure DevOps pipeline. Since the agent is on premise, you are now also able to access solution manager.

Here is a blog, how to achieve this. The keyword is "self-hosted agent".
https://azureops.org/articles/azure-devops-self-hosted-agent/

I am getting error at build phase any thoughts on the error.

difficult to give a qualified answer on this. Please check if the dependencies are installed without error. Second, check if the path of the execution is correct. You can put any Unix Command in the Task steps and check the output.

Ashwin Katkar I am also facing similar issue ? Was your issue resolved ?

I was able to resolve this issue.

The issue is with URL path -  "http://nginx-redirecto.npmrcr.repo-cache.svc.cluster.local/repository/appstudio-npm-group"  appearing also in my error log.

This repository is recognizable only in SAP BAS environment and since I was trying to deploy the BAS generated code from Azure pipeline, it was giving error.

One of the solution is to replace all occurrences of this URL in file package-lock.json with below and then push your code to Git which will be further taken by your Build pipeline-

can i build / deploy also SAP Analytics Cloud with this approach?