ABAP CDS views as data models take a major part in the ABAP environment and help defining contents within a HANA based system. As a beginner in the ABAP Integration world within SAP Data Intelligence it is sometimes not easy to find fast the right information in one place. What really helped me at the beginning is the starting blogs about ABAP integration which can be found here. To now provide people who have or had similar problems like me regarding the replication of self-created ABAP CDS-Views, I will provide in this blog a step-by-step guide to create your own ABAP CDS view from a SAP S/4HANA and then replicate this ABAP CDS view to a wiretap.

In this blog I will introduce to you the eclipse environment with the ABAP development tool add-in and the possibility to replicate your own created ABAP CDS view over SAP Data Intelligence.

After you now setup the ADT environment in Eclipse, we now come to the step to create an ABAP CDS view. First, we need to establish a connection between the Eclipse environment and the SAP S/4HANA system. To establish the connection, you must click with your right mouse clicker in the project explorer field: 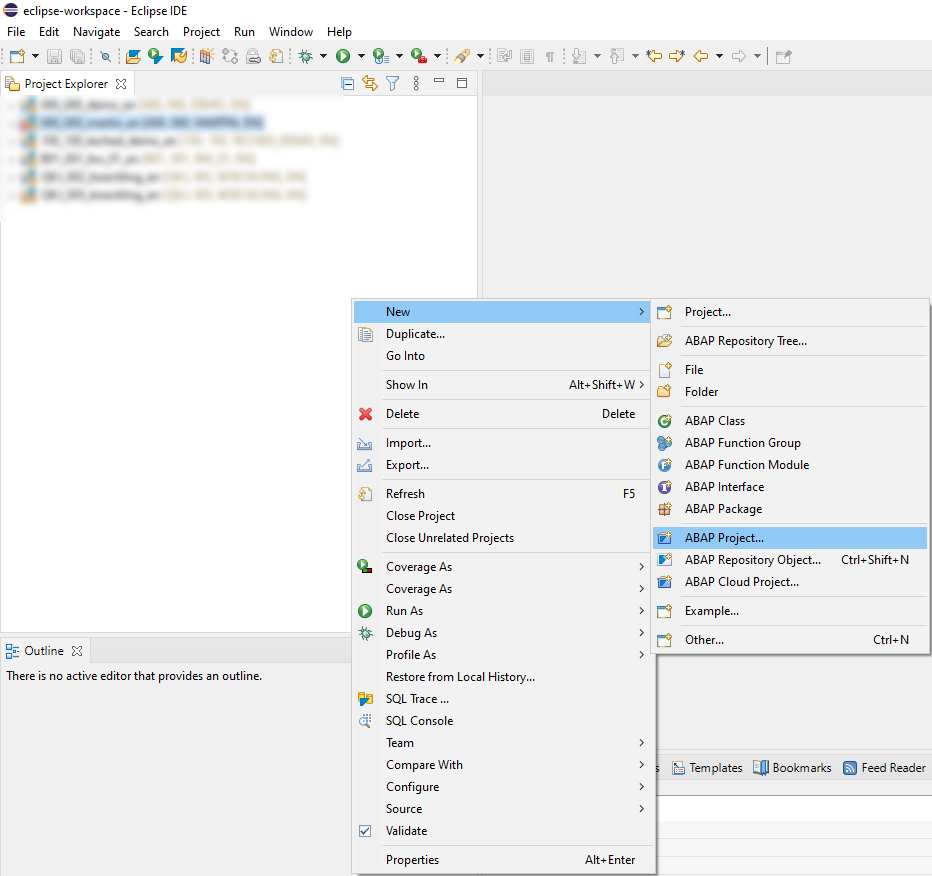 On the opened context menu in Eclipse, we now select under the entry New the entry ABAP project. After we selected this entry, you can now see a list of already connected systems from your SAP Logon environment. Select your system you want to connect with. 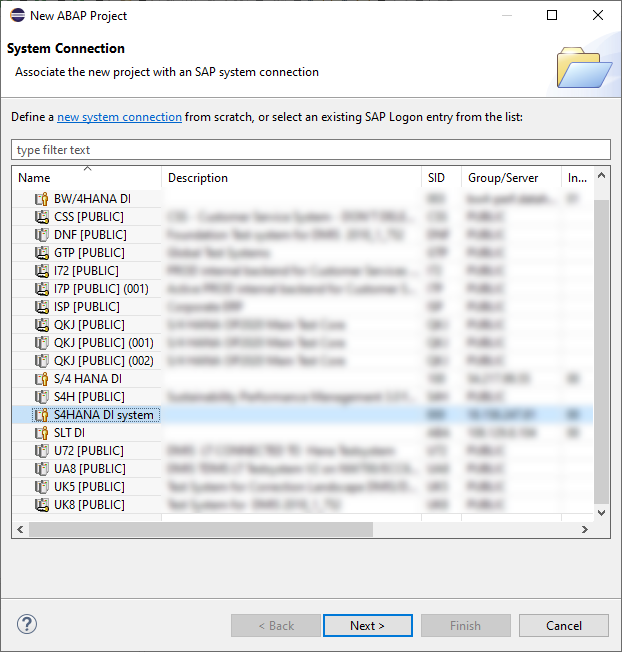 After we clicked on the ABAP Repository Object button, we get now the following overview of different possibilities we have from this endpoint. As we now want to create an ABAP CDS View, we are going to expand the Core Data Services section and click on the entry data definition. 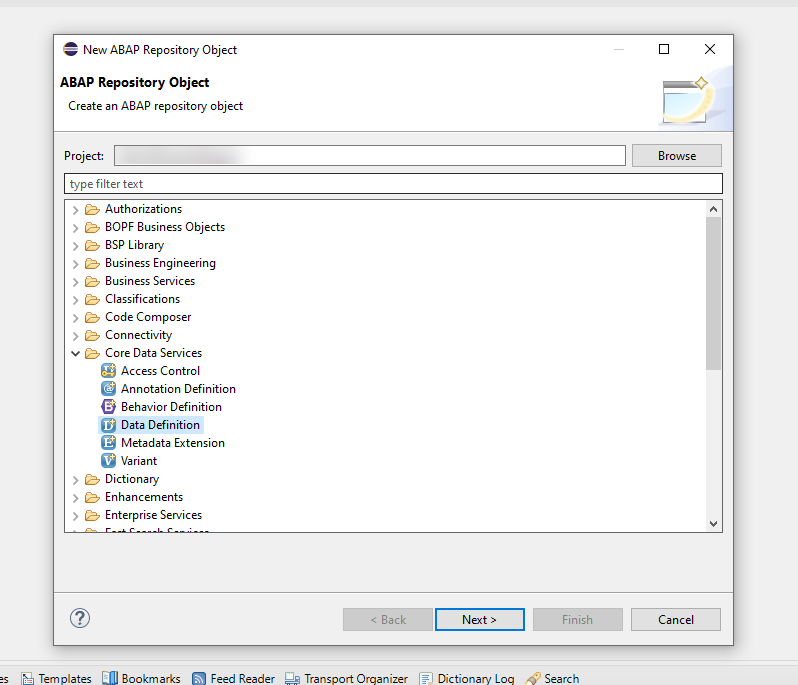 When we click on the Next button, we need to give the data definition a name, a description and it needs to be assigned to a package. In our example, we are going to assign to the temporary package $TMP. We name the ABAP CDS View Z_COMPANY_CODE_01 and a description like Company Code Replication. 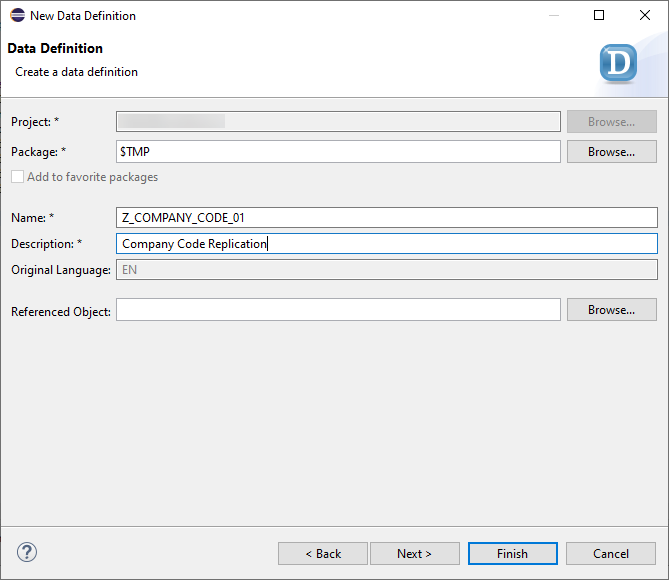 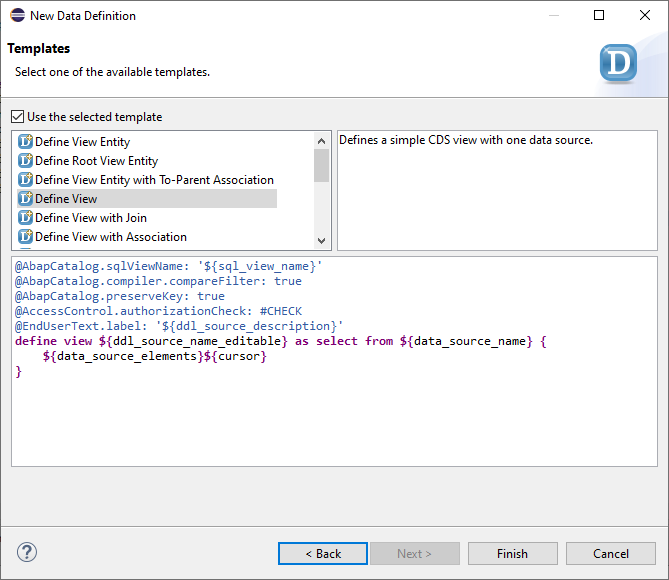 We now get the following overview with the Annotations displayed in blue color.

In the first line of the now created ABAP CDS view, we need to specify the SQL view name to name the corresponding CDS database view to our self-created CDS view. The limit for such names is restricted to 16 characters. An example of a possible SQL View Name could be ZCOMCODE_01. After entering the SQL View Name, it is now necessary to define the annotation of the ABAP CDS view. On the SAP Help Portal, you can find the possible annotations that can be defined in the ABAP CDS view. For the created ABAP CDS view we are going to use the tables t0001 and tka02 as tables for the ABAP CDS-view. The t001 table stores company codes and can be used to create a CDS-view. The tka02 table stores controlling area assignment data. We are going to join the two tables over the field bukrs and perform a left outer join with the table tka02 and use t001 as the main table. Furthermore, the field bukrs from the table t001 will be used as a Representative Key Field. The difference between a Key Field and Representative Key Fields is explained on this SAP Help Portal site. The definition of the ABAP CDS view is as followed:

To now enable the replication of the created CDS view, there is the need to enable on the first hand the replication and on the other hand enable the delta Capturing of the CDS view to really be able to replicate the created CDS view. When CDS views do not have the annotation defined, they throw an exception in the SAP S/4HANA application log (Transaction SLG1). If both annotations are missing, the message ‘CDS view Z_COMPANY_CODE_01 is not extraction-enabled’ appears in the log. If the annotation for the delta data capturing is missing, the message ‘CDS View is not enabled for replication, only initial load is possible’ appears in the application log. The needed structure for the deltachangeDataCapture annotation added with some deeper background information is explained in the blog of Simon Kranig under the following link or the SAP Help Portal site.

After the implementation of the respective annotation, the created CDS view looks like the following: 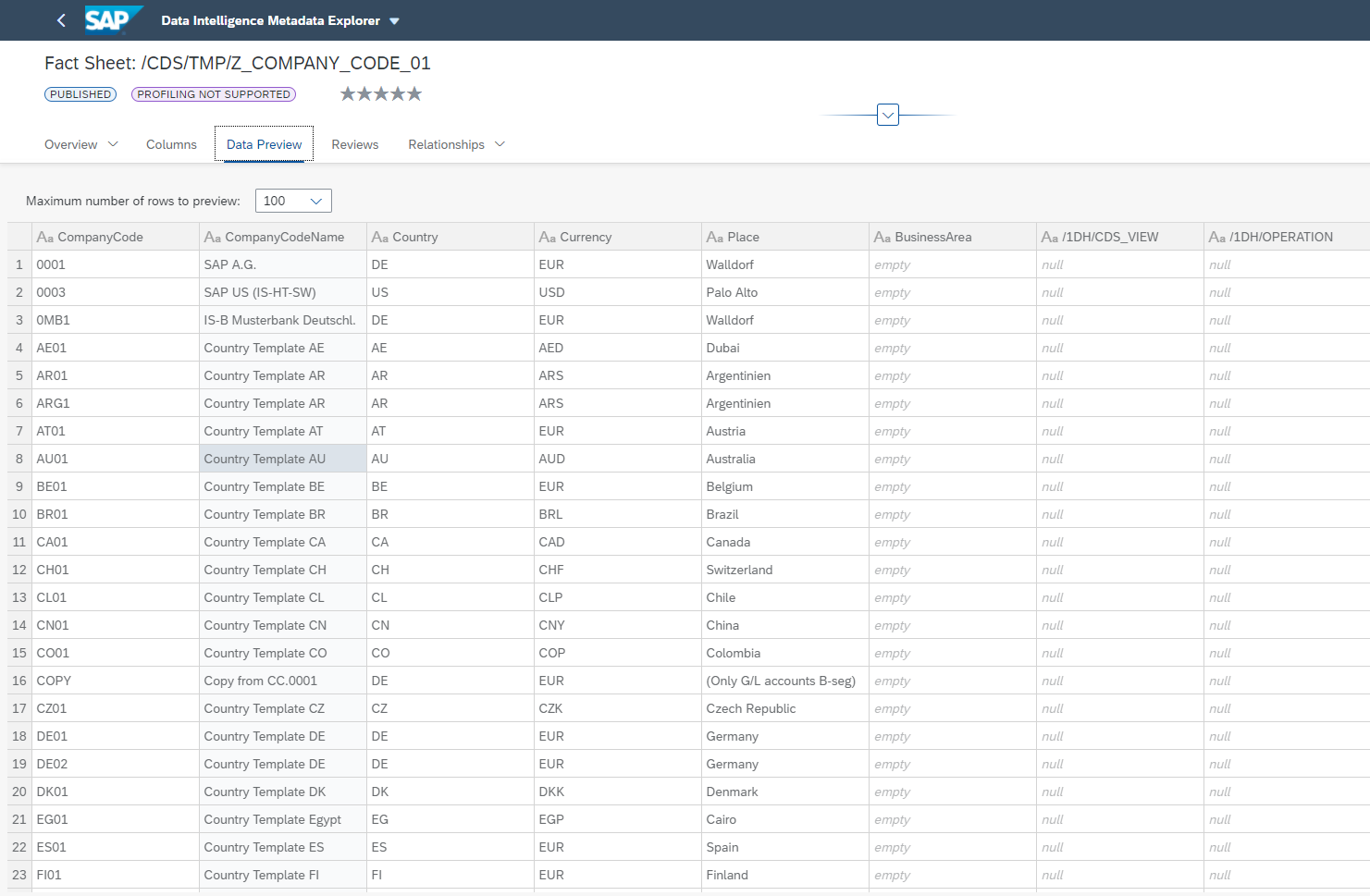 To now replicate the created ABAP CDS view, we jump into the SAP Data Intelligence system and access the modeler environment, in which we can create our pipeline. We then see the following overview: 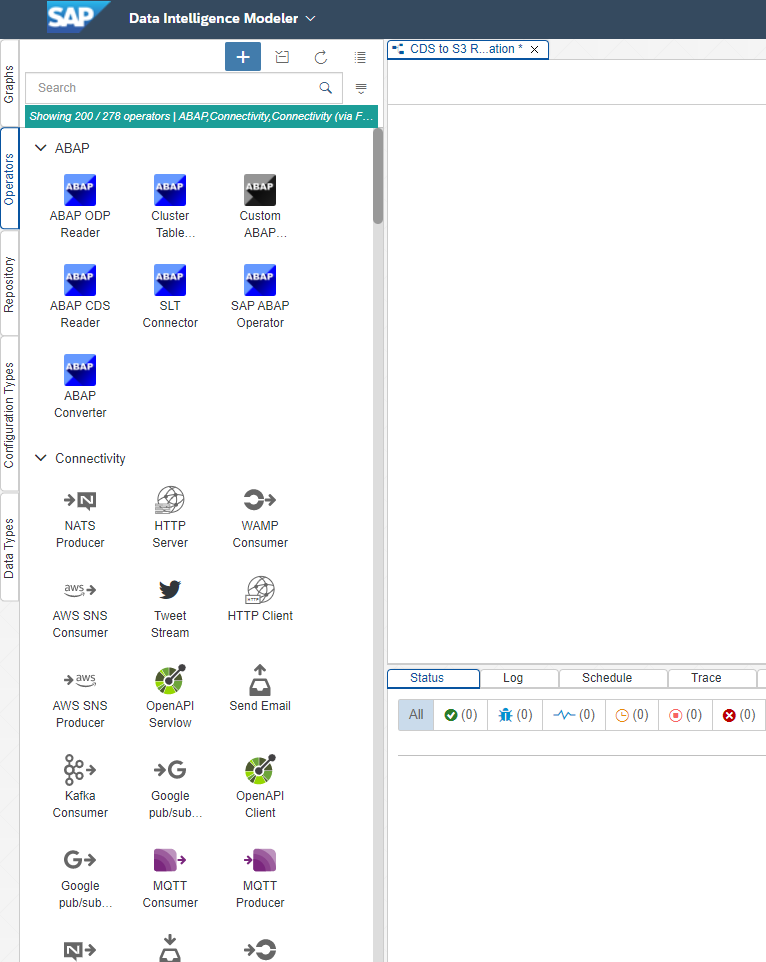 On the left side the user has the possibility to switch between different tabs, f.e. for predefined or stored pipelines or, as you can see in this picture, about the different available operators. The important operators in our case are the ABAP operators. To now put an operator in a pipeline, we must create a pipeline by clicking on the plus in the upper right corner of the left window. We give then the pipeline a unique name and store the created pipeline. After creating the pipeline, we can set up our pipeline with different operators. In our case we will use the ABAP CDS Reader and the Wiretap operator to look at our transferred data.

We therefore need to specify the ABAP Connection to tell the operator to which connection he should communicate, determine the version of the Operator ( in our case we used the V2 Operator as it transfers a message output and we do not need the ABAP conversion operator) and specify the name of the ABAP CDS view we want to replicate. The overview of the different available versions can be found under the documentation of the ABAP CDS reader documentation. 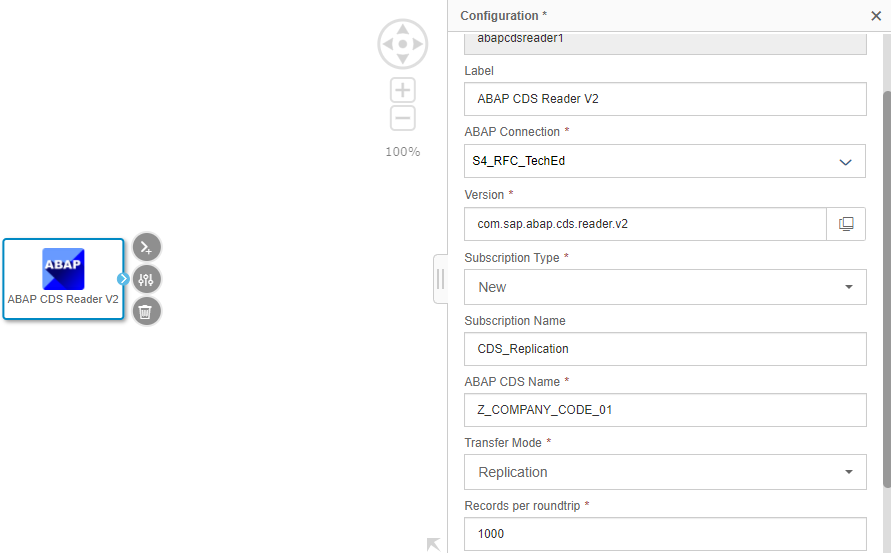 To extract the correct ABAP CDS view we must specify the ABAP CDS Name. As outlined in the official documentation, the SAP Data Intelligence system needs to have the necessary authorization or the ABAP CDS view is part of an allowlist. If this is not the case, the ABAP CDS view can not be used for replication. In the below list you can find the exact specification of the ABAP CDS operator:

After we defined the ABAP CDS Reader, we can enter the operator in which we can see our results, the Wiretap operator. An exact explanation of what the different customization possibilities mean can be found on the following SAP Help Portal page. For our purposes, we leave the default settings.

After we completed this graph, we save our pipeline and can run our graph by clicking on the execute button.

When the graph is successfully running, the replicated ABAP CDS view transfers it output to the wiretap and is then displayed in the corresponding UI of the wiretap operator. 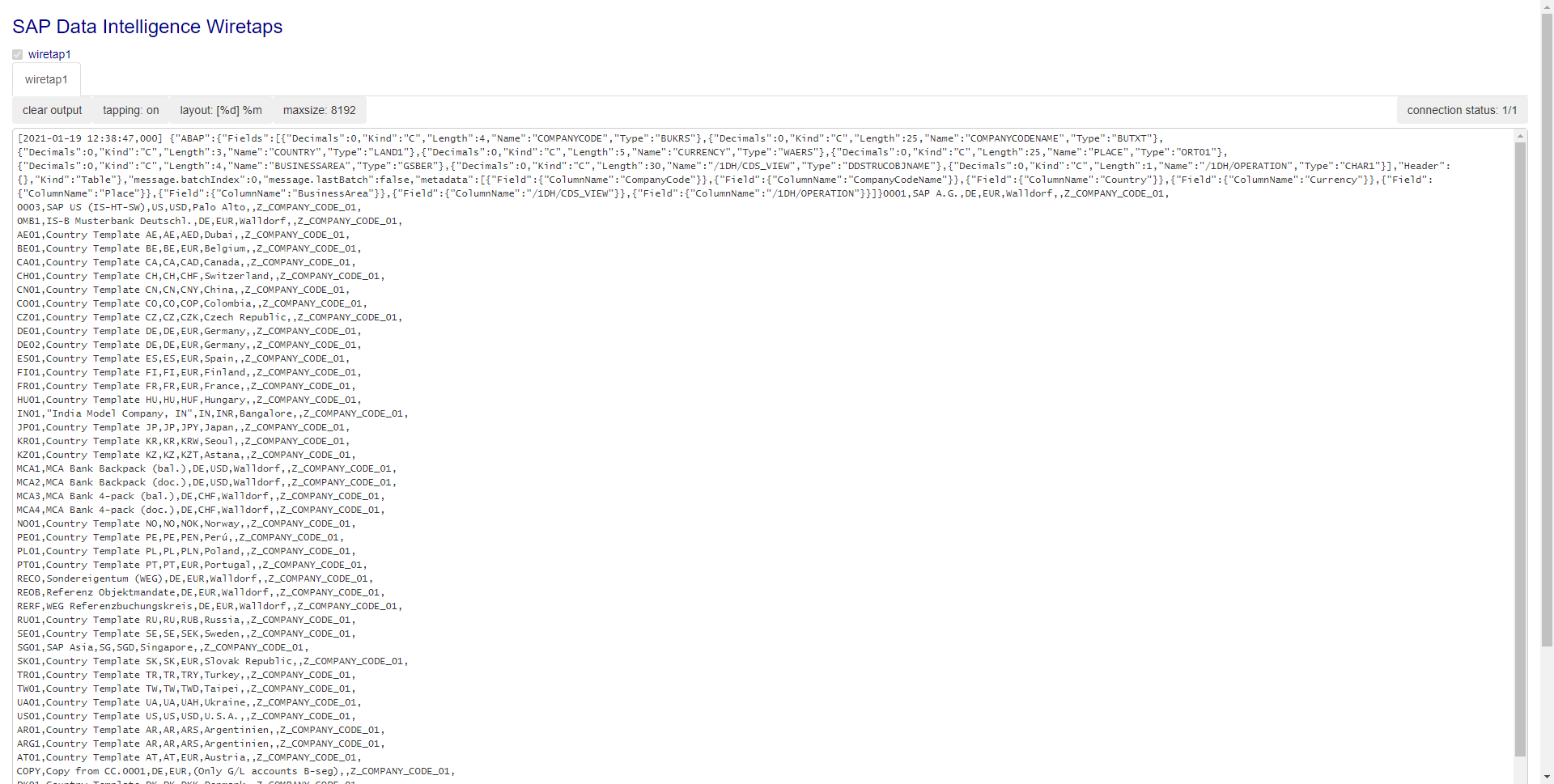 To debug why a Graph failed we can use for a SAP S/4HANA source system the functionality of the application log (Transaction SLG1). After specifying in which time range the error occured, the user has the possibility to check if the name was misspelled or authorization issues are the reason for a failing.

I encourage you to try out different ways of building your ABAP CDS view by f.e. using Associations instead of Joins. Check therefore this blogpost out from Sanjeev Kumar where he talks about the difference between Joins and Associations.

Great blog. We've been using the CDC mechanism quite a lot. It is very useful when dealing with delta on meaningful datasets (VDM objects). I have a question for you - do you have any recommendations regarding CDS CDC on tables like MATDOC or MATDOC_EXTRACT? It looks like the CDC annotation does not detect any of the columns in that table.

I am unfortunately not an expert on the MATDOC or MATDOC_EXTRACT tables nor the SAP S/4HANA product itself. Therefore I can not give you a detailed answer based on my past experience.

But do I understand correctly that you tried to build a CDS View on top of the tables? If so, would you like to share your constructed CDS View? As an alternative you could use the community forum to ask your question to get an answer to your question from the SAP Community via this link.