New release of the Cloud Connector (2.13)

A new version of the Cloud Connector with lots of new things is released and ready to download from tools.hana.ondemand.com. Many things have been changed- some are visible, and others are behind the scenes. Let me give you an overview of the most interesting and important changes:

Visually you will see some differences as now Fiori 3 is used and already on the logon screen a long time wish of some customers is implemented: 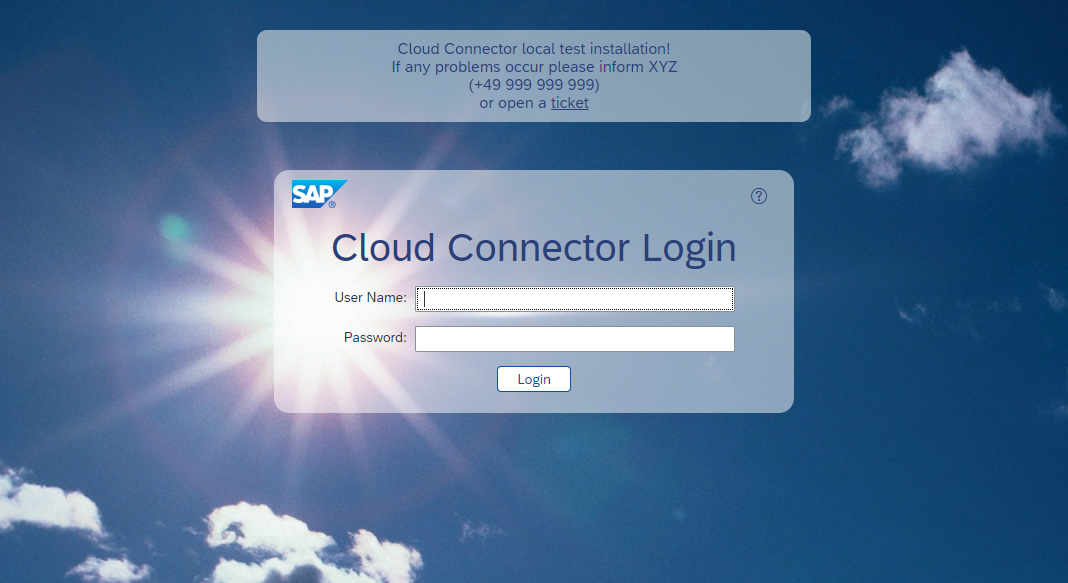 Directly on the logon screen you can add helpful information for users of this instance like here on the screenshot on how to get support and much more.

Another cool addition which also adds more information to the UI is the subaccount monitoring for giving you more insights where which calls happen and how much data is transferred for: 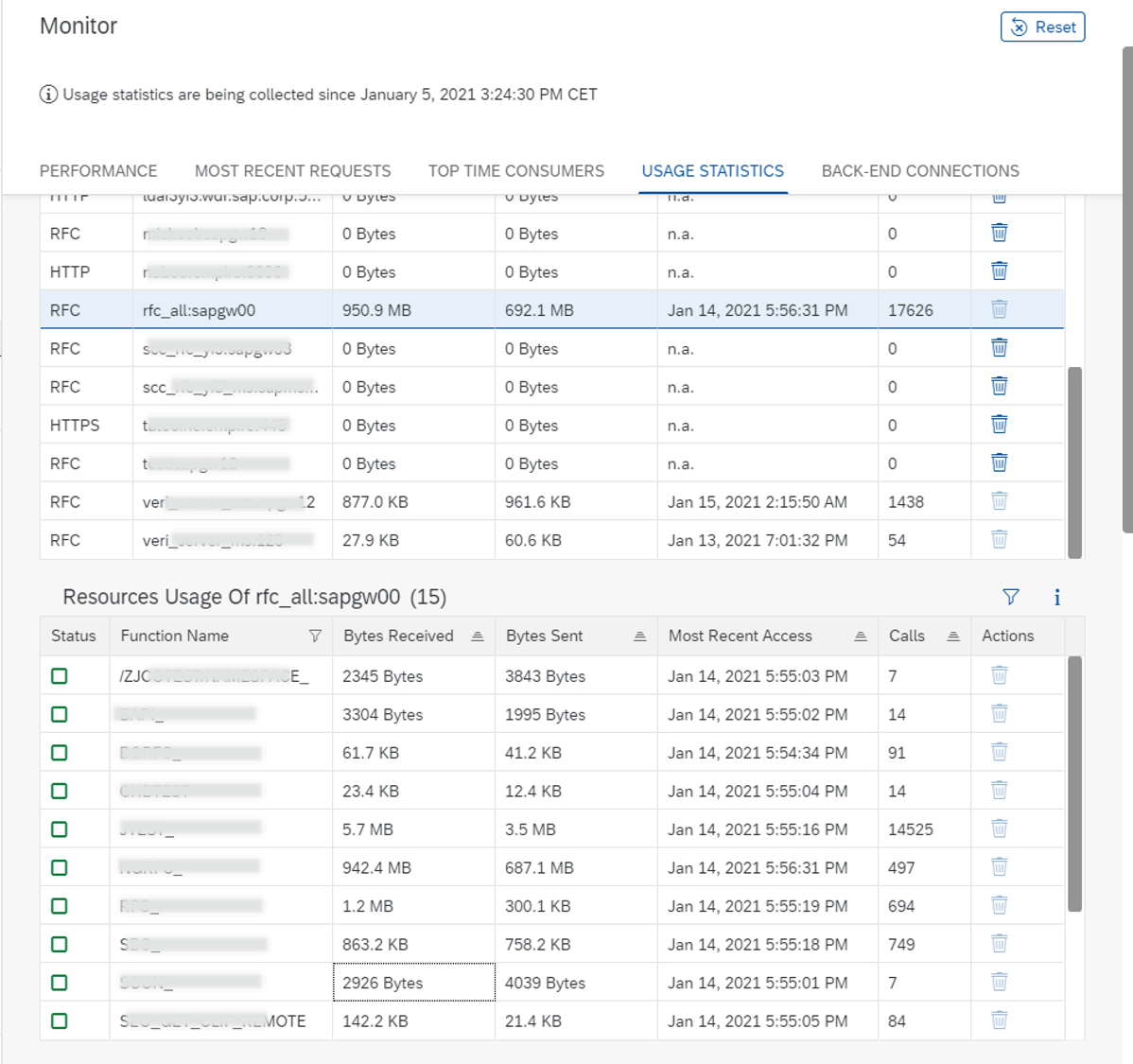 With that information performance optimizations will be easier than before. You have access to a performance overview where calls got collected in different buckets from a timing perspective. But also, in more detailed views like the most recent requests or the top time-consuming requests. This information can be found directly in the UI but there are also APIs available that data in other systems. Read more in our documentation.

Other APIs which are new belong to the configuration. As usual more details can be found in the documentation.

A new feature from a networking perspective is the possibility to not only use single ports for TCP (and TCP ssl) but also port ranges which minimizes the number of necessary mappings especially for FTP: 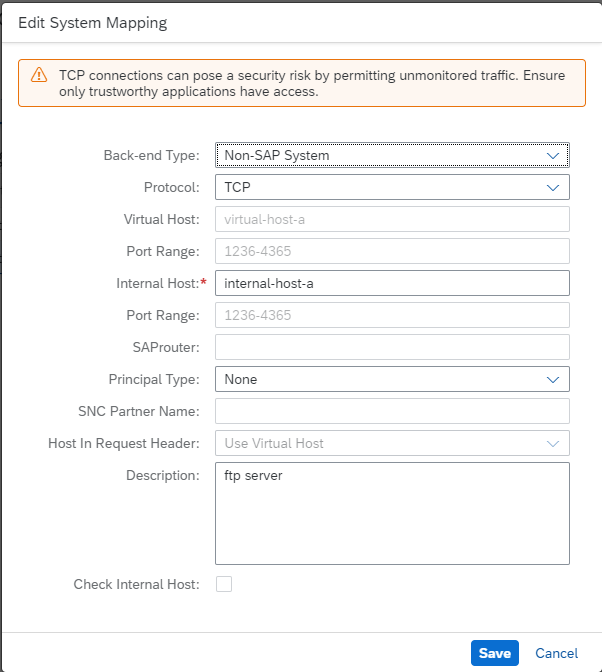 We all know keeping software up to date is not easy. To make it easier for you keeping the Cloud Connector on the most recent version we’ve added a notification and an alert which will inform you as soon as newer versions are released.

Behind the scenes many other changes happened to ensure better security but also to adjust the used software pieces to a newer state like the change on the used tomcat version from 7 to 8.5.

SAP Cloud Connector is already available on several platforms, but we even added now one more: Linux on ppc64 (little endian). If you need more details about the supported platforms have a look.

As usual the current version can be found on tools.hana.ondemand.com and the complete release notes are also worth a look!

Thanks for the update… does this version support ARM-based CPUs? The 2.12.x cc has a C library that is compiled only for x86_64. Thanks!

right now there is no support for ARM-based CPUs as we do not see enough demand to add an additional platform.

Thanks Marco for the update. I think you will have more demand sooner rather than later, the consumer market is getting flood by powerful arm cpus and I would speculate on an increase in the enterprise sector as well. For example, many SAP employees use apple computers and the new macs have arm based cpus.

My particular scenario is really a hobby. I’m using Ngrok for now, but it would be great to have a lightweight cloud connector as well. When I tried to make it work (2019), the only obstacle I found was the C library I mentioned, I would guess there are other considerations that I am not aware of.

Thank you for sharing details around new features on latest cloud connector release. We are already having 2.12 version installed , additional guidelines on upgrading existing version can help further. Thanks !!

we recommend to upgrade to the actual version as also security fixes and updates of used components are happening.

Sure. Thanks. Can you share process of upgrade pls.

Thanks for the detailed blog.

can you explain what you mean with multiple user accounts and their limitations?

Thanks and Kind Regards

Besides "Administrator" account, Is it possible to create user accounts for different teams?

this is possible if you use LDAP. Read more here.

Where can I see the list of improvements/enhancements to know what is changed between 2.12.4 and 2.13? I don't find this in documentation. Also anywhere we can see future improvements planned in CC?

you can see the deltas in the release notes.

Since the SAP Cloud Connector Version 2.13.2 we are facing a certification issue, which does not came up with the version 2.13.1.

Can you tell me, where I can find the files for the previous release 2.13.1?
When I try to open https://tools.hana.ondemand.com/additional/sapcc-2.13.1-windows-x64.msi we are facing a 404 Message.

It would be great, if you can help here

Hi Erich Klassen , I get exactly the same error after the update to 2.13.2. Do you have a solution for this?

I was lucky that I have the Cloud Connector WAR file from a previous installation of version 2.13.1 on my local system.

We removed the war file from the installed SCC verion 2.13.2 and replaced it with 2.13.1 under the webapps directory of the SCC installation. Even if we download the newest patch, just replacing the WAR did the trick for us.

Have you opened support ticket(s) for this already?

It would be helpful if you provide SAP with TRACE level of "Cloud Connector Loggers" from the time of reproducing the problem, also share the public data of the certificates for the TLS connection.

You may check in more details the release notes of Connectivity - Cloud Connector - Security Fixes, here's a direct link: August 12, 2021

You may also set the "Cloud Connector Loggers" to TRACE level and "TLS trace" option in the cloud connector to observe the exact details for the error with the backend certificate, see more in Cloud Connector - Troubleshooting documentation.

thanks for the advice with the required logging options for the Cloud Connector.

Due to security improvements in Version 2.13.2

The affected functions have been enhanced to do all the necessary validations when communicating with backends."

an consumption of an https Mapping to an BE System seems to be handled stricter.

Till version 2.13.1 it was sufficient to set the IP Adress of an BE System as an Internal Host of an https Mapping.

From version 2.13.2 the value of Internal host is checked against the icm Parameter icm/host_name_full of the BE System.

We changed this in our https Mappings did the update to Version 2.13.2 again and it is working perfectly fine now.

the root cause in our scenario was the following:

When we set up https Mappings to Backend Systems in our CloudCOnnector, we enter the IP Adress of the BE System in the Field internal Host

We had to change the IP Adress to the Domain name.  After that it worked perfectly fine

Hi Karsten, many thanks for your contribution! We faced the same issue. After changing the mappings as mentioned everything works fine!

Please can you share more details on how to update the mappings.

If we update Domain name instead of IP in cloud connector where can we map the IP address to domain name?

Unfortunately i do not have more information to share. I think the Server Environment the Cloud connector is Running on has to provide capabilities of domain name mappings/resolving. Like a host file in a local windows machine.

The only Thinge i did. was changing  the ip address to domainname.

Thanks for your reply Karsten.

Please can anyone provide inputs on how to get the DNS mapping for local commerce cloud server.