In early December we had a Hackathon with SAP partners that was focused on using Intelligent RPA with Ariba. You can view the summary of that Hackathon in this blogpost from the Co-Innovation Lab. This Hackathon challenged partners to design and develop a use case for automation with Ariba. Over the next few weeks I will be sharing these use cases in a series of use case spotlights.

The first use case we will highlight in this series is the Contract Workspace automation that the PWC team created. The problem the team addressed was that the contract workspace does not get automatically published for use after receiving a signature on the final document. This leads to delays and increased cycle time, and the resolution would require multiple clicks either by the contract owner or the business user.

The solution was to use Intelligent RPA to ensure naming consistency for contracts and automate the contract publishing process. The PWC team designed their bot to use the email notification system to capture contract information.

You can see this process flow in the process map below: 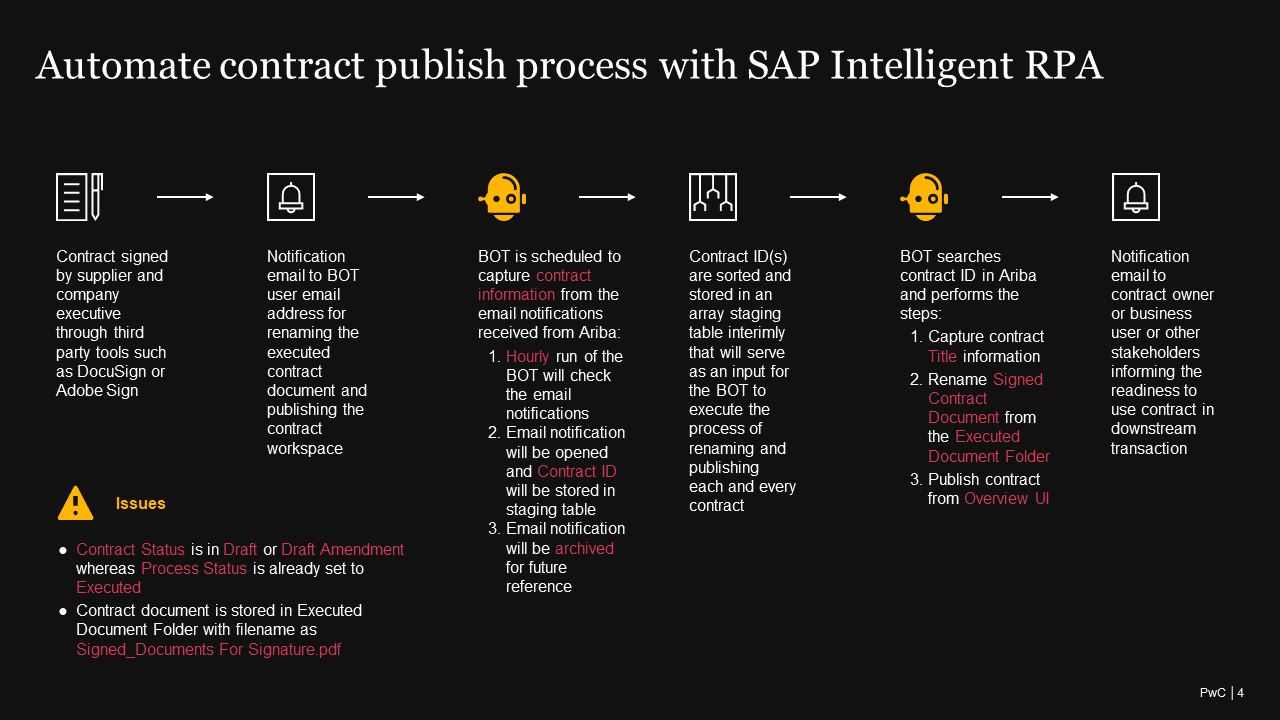 An interesting feature of this automation was its use of Gmail. While there is a library for email automation with Outlook, there is not a library for Gmail at this time. In order to automate this process with Gmail, the team had to capture the pages in Gmail for the inbox and for an open email. Some of the buttons on Gmail were difficult to capture and were finicky to automate with clicks. In order to stay on track with time constraints of a Hackathon the team used a great resource for desktop automation, hot keys. The team was able to configure hot keys that the bot could send with the keystroke function and overcome the capture issues that they were facing with some elements on Gmail. Additionally, because the team developed the email bot as a stand alone workflow from the processing bot, it can be leveraged for future use cases that will require Gmail.

By implementing this automation PWC estimates there would be time savings of 5-10 minutes per contract which would translate to an average of 25k-40k USD in savings per FTE. 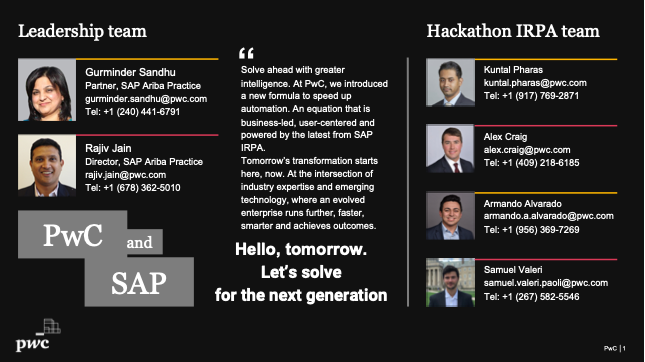 Have a great day and happy bot building!

Why you have not added the Gmail account to Outlook and use the Outlook automation? Or was that a strict requirement to use the Gmail app?

That's a good idea! We decided to go the route we did so that the team didn't need to procure any additional software. With the time crunch of a Hackathon the team wanted to use the web capture.