The new ELSTER solution is designed and developed to wrap native OS libraries that are provided by the German tax authorities (ERiC). It is using completely different approach from technical point of view to distribute the ELSTER payload that is sent from the HR or FI business system.

The new ELSTER SCA file contains the following components :
1. fi~elster_appl.sda – This SDA file is the ELSTER application itself. It contains two projects. Web part, that is responsible for deploying and loading the native libraries, and the ELSTER modules.
2. fi~eric_lib.sda – This is java library that wraps the ERiC api. It is used from the ELSTER modules to call the native libraries API.
3. fi~eric_win.sda – This SDA contains the native ERiC libraries that must be deployed in order to have successful transfer of the ELSTER payload to the German tax authorities. This library triggers offline deployment. This means, that the cluster will be automatically restarted during deployment !
4. fi~jna_lib.sda – JNA java library used by the fi~eric_lib.sda to wrap the native libraries.
All this components must be deployed in order to have a working solution. Also, the start of the application must be without errors.
When the deployment and start is successful, you will see the elster application started successfully in NWA.

1. DEPLOY: On this stage the ELSTER SCA is triggered for deployment. Since the deployment is offline the system will be restarted.
2. STARTING: The starting mechanism is handled by the WEB part. The class that implements the logic is “com.sap.fin.elster.web.ContextListenerImpl”, so In order to troubleshoot any potential issues
regarding the start of the application we need to run XPI Inspector traces with example 100 (Custom)
with “com.sap.fin.elster” and since the WEB application is using the ERiC wrapper we need
“com.sap.fin.eric.wrapper” as well. You can see example trace below.
2.1. Example with fresh deploy of the libraries or update. Please note that in order to extract any files on the file system, the “Archive hash” and the “logged hash” values must be different.

2.2 Example with native libraries that are already deployed. Please take in mind that this error occurs on two conditions. The ericapi.dll is really missing for some reason or, more likely, the ericapi.dll is already loaded in the JVM (not an issue at all). More information from the java documentation:
UnsatisfiedLinkError – if either the filename is not an absolute path name, the native library is not statically linked with the VM, or the library cannot be mapped to a native library image by the host system.
Other issue, for example wrong libraries for the current OS also occurs with UnsatisfiedLinkError,
however the error message is different.

Also during the starting phase, the Datenartversionmatrix.xml is build to objects and stored in a local
cache that will be used durng runtime.

5. STOPPED – The application is stopped either by user interaction or because it has failed to start. 6. UNDEPLOYED – Best possible state, because no application = no issues.

When the application is deployed and starting, it is trying to extract the contents of the eric_win library on the file system. The files extracted has the following structure: 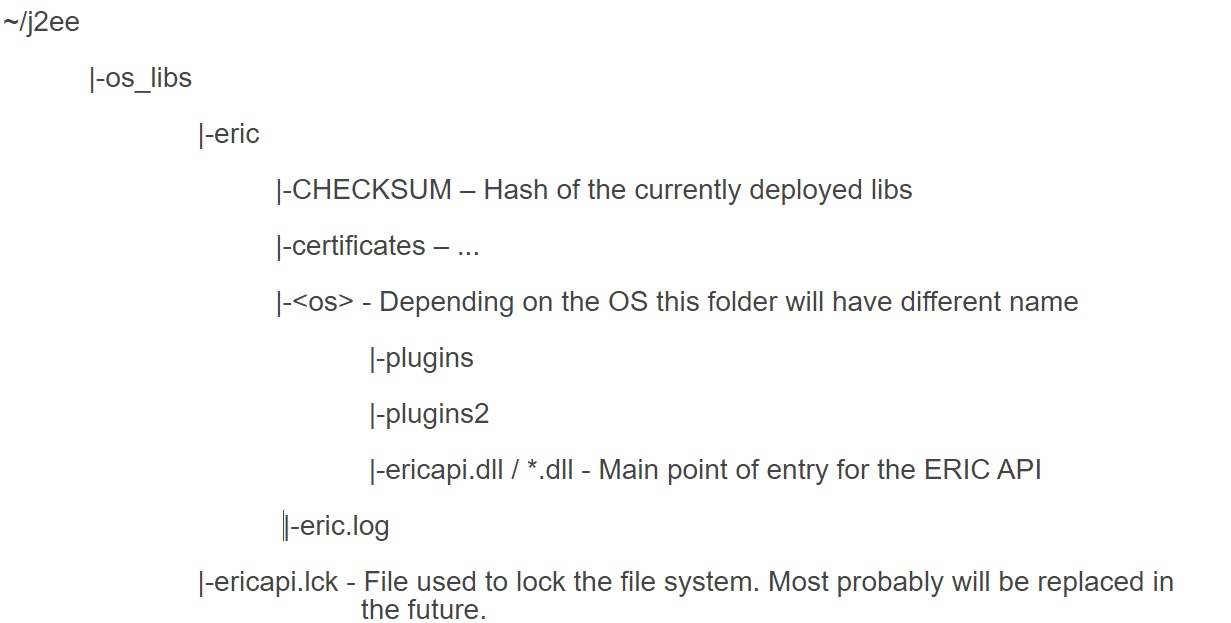 Certificates folder – The all mighty and powerful ERiC API can use certificates that are only stored on the file system. And because of that, one every message we export the required certificate from the NW keystore and place it in the “certificates” folder. The certificate is in PFX format has the XI message ID for file name.

Eric.log file – This file contains all logs that the ERiC API is writing. It is very useful if the message fails during validation or any other ERiC specific issues.

The new ELSTER solution is very flexible. It can use the data provided by the partner system but does not rely on it. What does this mean?

There are three possible scenarios that can be handled by the modules. The module chain and the configuration are always the same.

3. BASE 64 Encoded ELSTER payload in new format, that is part of the RFC format in point 2. – The real productive scenario!!!

In order to have a working scenario we need to have successfully build ERiC context. This context represents this and can be seen in the traces of every message.

CONFIGURATION CHANGES TO BE DONE IN PI

Actual data sending is carried by the ERiC application and not by the SOAP receiver channel anymore, which is why to SOAP receiver must point to the own host. This also lead to scenario changes as there is no need for 4 separate receivers and their 4 corresponding SOAP receiver channels.  Follow the configuration described in  SAP Note 2745249 – Implementation of ELSTER modules using the ERiC libraries (check the attachment in the SAP Note):

The operation mapping RFC_To_Elster must be removed from the scenario If it’s not removed it can lead to message processing errors described in KBA 2887097 – Elster ERiC errors – org.xml.sax.SAXParseException; lineNumber: 1; columnNumber: 50; The processing instruction target matching “[xX][mM][lL]” is not allowed. The following steps describe how to remove the mapping: 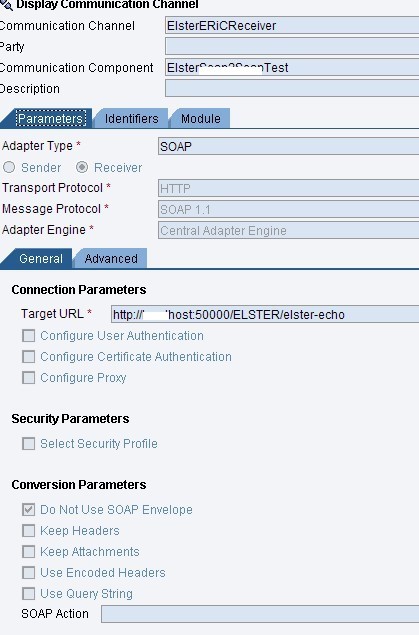 Any reference to the old URLs like below is incorrect and will cause message processing failure,e.g:

If the used modules and their order is not exactly the same as above, it can lead to message processing errors highlighted in KBA 2887677 – Elster ERiC errors – got unexpected document type:DOC_TYPE_UNKNOWN.

The usage of sap.com/com.sap.fin.xi.elster/ElsterHCMConvertRFCToElster or AF_Modules/XMLAnonymizerBean is deprecated and should be removed.

2.3. Remove the receiver determination rules and the additional receivers for FI scenarios.

If there receiver determination rules are not followed it can lead to message processing errors described in KBA 2890604 – Elster ERiC errors – PI ERROR 01 VERSION com.sap.engine.interfaces.messaging.api.exception.RetryControlException: Receiver Determination did not find any receivers at all.

2.4. Remove the proxy settings from the channel configuration and move them to module parameters or application properties:
use.proxy – > possible values true/false
http.proxy_host
http.proxy_port

potentially also:
http.proxy_user
pwd.proxy (http.proxy_password is the equivalent of this property in the Application Properties)

2.5. Set up the certificates in at least one of the modes below;

CONFIGURING THE CERTIFICATES IN THE ELSTER MODULES FOR PI/PO

HOW the certificates are delivered ?
Usually the certificates are provided by the authorities in one PFX file. This file contains two keys, accompanied by certificate chain. The keys are two, because they have different usage. One is with key usage “key encipherment” and the other is with key usage “digital signature”.
In order to have working scenarios the PFX file must be split to two parts. One containing the private key for encipherment and one for signature. This is required due to the way the NetWeaver Key Store is importingcertificates.

1. Splitting the certificates With keystore explorer

Export both key pairs and import them in the NetWeaver Key Store.

2. Splitting the certificates With internet explorer

You will then find 2 certificates issued by ELSTER in the “Personal” tab of the certificate management with friendly name “encryptionkey” and “signaturekey”. 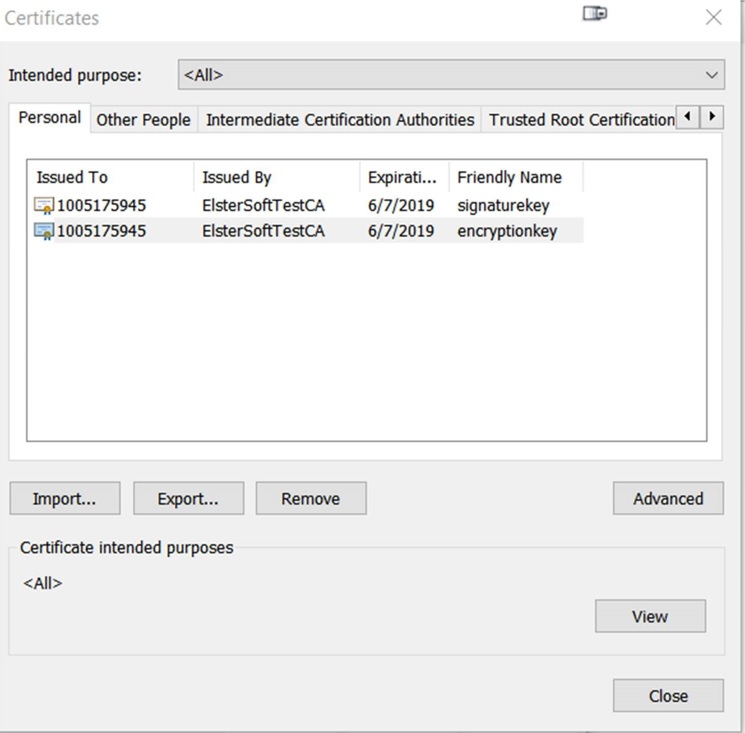 3. Importing the certificates in the key store

Using the “Add View” button create new Key Store View. In the default configuration the view is named “elster_ag”. Then, using the “Import Entry” button import the two certificates, that you exported previously. Rename the certificates if it is necessary. The default values are “elster_ag_key_enc”, for the encryption key, and “elster_ag_key_sig”, for the signature key. 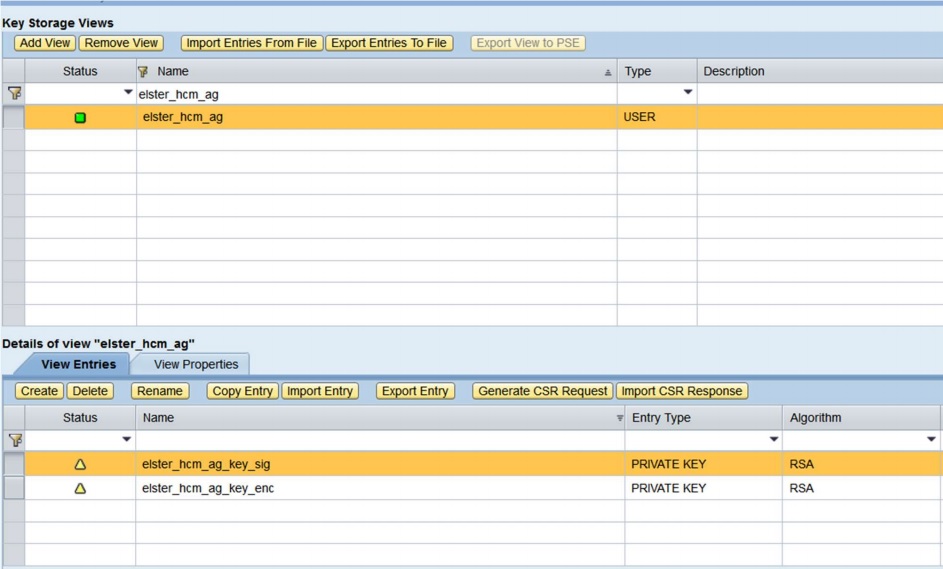 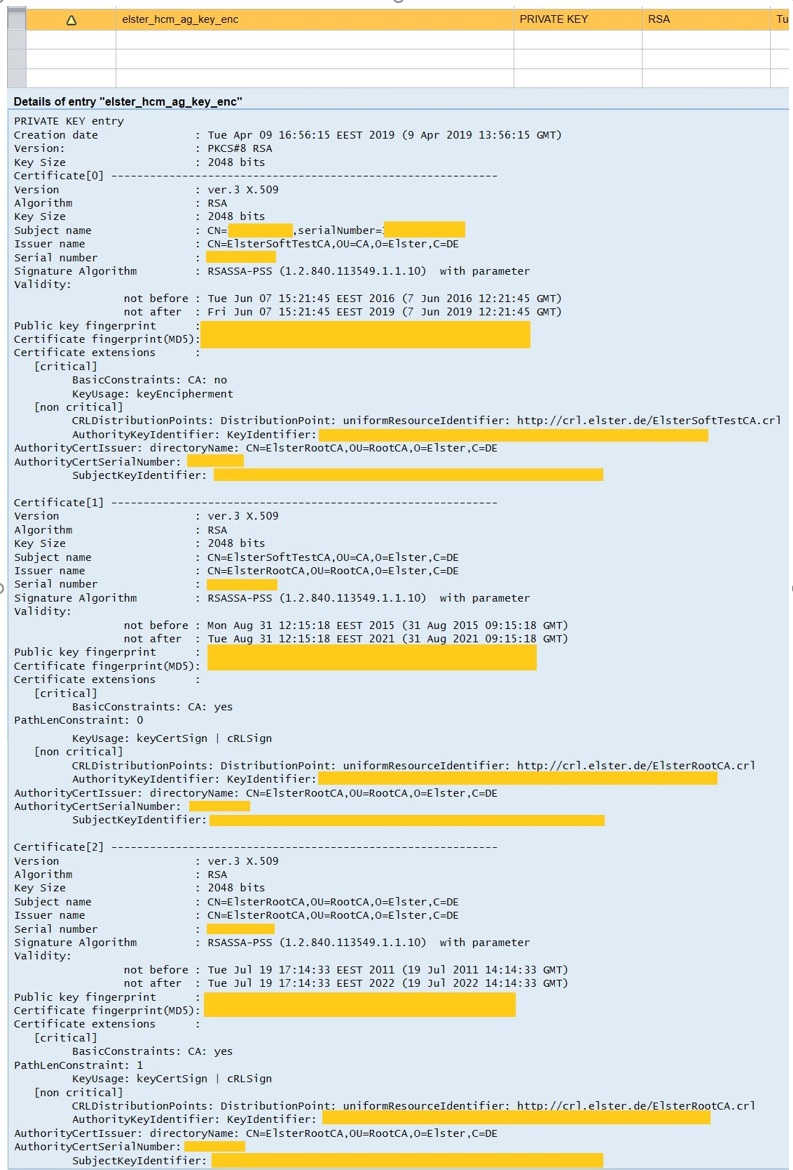 Certificates can be configured in 3 ways: with incoming payload, as module parameters or as Elster application properties. The priority in descending order is: payload -> module -> application.

4.1.) The configuration for the certificates is sent with the payload from the HR or FI system. This is checked with highest priority. In this case the XML has the following structure:

The “CERT_VIEW” tag stands for the key store view in the NetWeaver key store.

The “CERT_AG” tag contains the name from which the aliases for the encryption key and the signature key will be composed. For example:

In that case, you must have the keystore vie with name elster_ag (or whatever set up in the sender HR or FI system) in NetWeaver java keystore and two entries with the necessary keypairs, ending with _enc and _sig, as shown above.

4.2.) If the certificate parameters are not provided with the payload, they will be taken from the module configuration. Set up the properties as shown below: 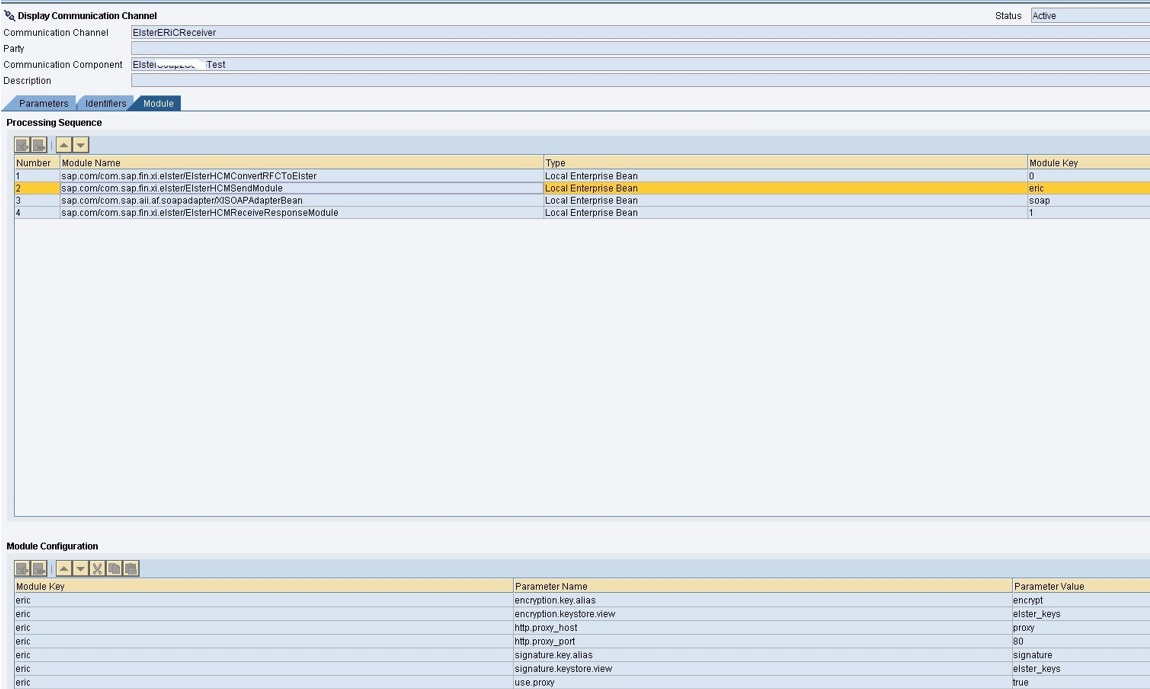 4.3.) In the certificates are provided neither in the payload, nor as module parameters, you can set up them as application properties. The same is valid for proxy settings.

The best way to troubleshoot these kind of scenarios is to trace the error with the XPI Inspector tool (SAP Note 1514898).

1.1. Install XPI Inspector tool by deploying the EAR file which you were given in an OSS incident. It’s crucial to install the latest version of the XPI Inspector tool as from version 6.6 a new Elster related example is available.
1.2. Open the URL http://<host>:<port>/xpi_inspector.
1.3. Check the version of the XPI Inspector in the system. Open the URL http://<host>:<port>/xpi_inspector.
The RFC Sender Communication Channel, which connects the FI/HCM system to the PI system.
The SOAP Receiver Communication channel, where the ERiC application is triggered which transfers data from the PI system to the Clearingstelle.
1.4. Start the XPI Inspector tool by clicking on Start button.
As soon as the error message appears, click on Stop to stop inspection of the tool.

1.5. Repeat the procedure from Step 2 but select Example 71 – Elster instead of Example 50 – XI Channel. Both Example 50 and Example 71 can be relevant for the troubleshooting.

With older XPI Inspector versions – use it with example 100 (Custom), selecting the following locations:

Press “Start” and reproduce the issue.

In the traces you will see the loaded libraries paths, the payload, the properties, the keystore aliases that are searched in the key store etc. – all the necessary information for troubleshooting. 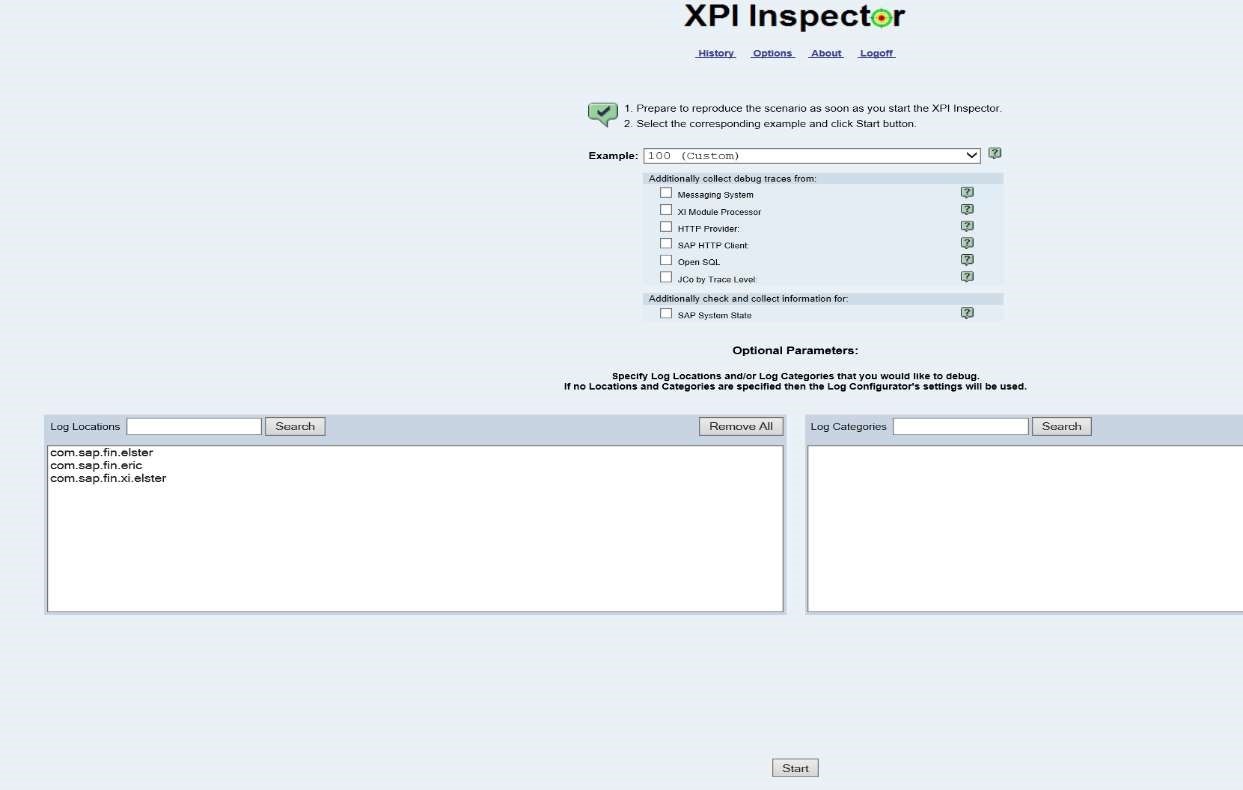 2. In case of an error during the message processing like: “Unable to create EricContext due to KeyStoreException: Certificates with aliases: my_invalid_alias_enc and my_invalid_alias_sig are either invalid or does not exists”, the best way to check what is wrong is to use “XPI Inspector”.

To remove the error, verify that all aliases and the key store view name are correct.

The ERiC application is collecting logs in the folder /usr/sap/<systemID>/<instanceID>/j2ee/os_libs/eric in the file called eric.log. This log file can reveal any validation, connection errors. The default log level is INFO but this can be increased so that the whole processing by the ERiC application is logged. There are two ways to increase it the log level.

3.1. Increase the ERiC application’s log level in a channel

Most of the properties are described in note 2745249 – Implementation of ELSTER modules using the ERiC libraries.

“default” – Fail the message in PI. This is the deafult value in order to keep backward compatibility.

“text” – Return the exception text to the ABAP system

In this blog post we had a general information, configuration and troubleshooting guide for the ERiC scenarios which is relevant for the new Elster implementation introduced with SAP Note 2745249 – Implementation of ELSTER modules using the ERiC libraries.

Hello, can you provide a complete screenshot of ESR and ICO in Po? Thank you