Nexus Repository provides storage for build artefacts, the ones created by your pipelines as well as the ones you use, e.g. in Maven or NPM builds as a proxy. In our example we’ll use it to store the artifacts created from the build step in our pipeline.

Use nexus as build cache

The cx-server already includes a Nexus build in. It’s used as a cache for the build.

In order to use it , open your terminal and make sure that the cx-nexus docker container is running. The common pipeline environment will check if the cx-nexus is available and will use them as build cache.

The credentials for the nexus can be set inside the nexus interface. This can be accessed by default using http://localhost:8081.

Create a new step and add the following content:

After this the pipeline will store the build artefact in the Nexus: 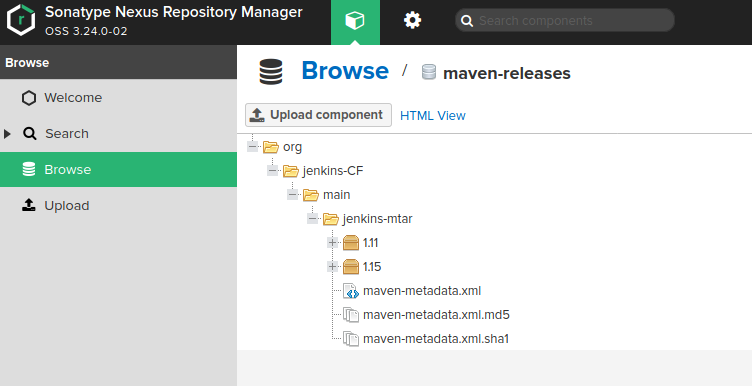 The Sonaqube code scanner allows you the scan the project for coding issues as well as code guidelines in order to achive better code quality.

Now we want to add a sonar scanner to our project. As described in the previous step download, run and add the container to a docker network.

Open the interface of the scanner an create an account. Next set up a new project and an authentication token. This token needs to be stored in Jenkins credentials as a secret text.

Also install the sonar scanner plugin. Move up to manage Jenkins and open the global tool configuration. And scroll down to SonarQube scanner:

Now we can switch into our IDE and adjust our Jenkinsfile.

First, we need to create a new file in the root directory of our project named sonar-project.properties this file contains basic configurations:

Add a new step to your Jenkinsfile and use the following content:

After executing the extended pipleline you’ll be able to see the scan results on the Sonaqube page:

As you can see, the Jenkins pipeline is flexible and can be extended/adopted to your needs. That’s all for this blog series introducing different ways for continuous integration and delivery on SAP Cloud Platform.