In this blog post, we will show users how to perform time-series modeling and analysis using SAP HANA Predictive Analysis Library(PAL). Different from the original SQL interface, here we call PAL procedures through the Python machine learning client for SAP HANA(hana_ml). Python is often much more welcomed for today’s users that are most familier with Python, especially data analysts. Thanks to hana_ml, now by wrtting lines of Python code, we can call various PAL procedures with easy.

Besides Python, we also assume that readers of this blog post have some basic knowledge on time-series like trend and seasonality. If not, please refer to the Appendix section of this blog post for a quick comprehension.

The rest of this blog post is organized as follows: firstly we have a brief introduction to the time-series data of interest, with some basic analysis using run-sequence plot and seasonal decomposition, then the time-series data are further analyzed by exponential smoothing and ARIMA models, finally the main content of this blog post is summarized.

Introduction to the Dataset, with Basic Analysis

The data used for demonstration in this blog post is the “AirPassengers” dataset, which reflects the number of passengers(in thousands) transmitted monthly by an airline company between Jan. 1949 and Dec. 1960. This is a classical dataset that was introduced by Box and Jenkins in the reknowned textbook Time Series Analysis, Forecasting and Control(3rd edition). We assume that the dataset is stored in a local .csv file(AirPassengers.csv), and it can be loaded to the Python client using the pandas libary.

So the timestamp column for this time-series is Month, where each month is represented by the 1st day of it.

Now we take the first step for analyzing the time-series data — drawing its run-sequence plot. 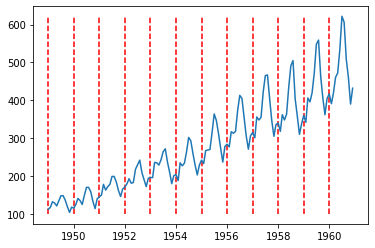 Every dashed red line in the above figure indicates the start of a new year. We can see from this figure that the number of airline passengers keeps growing year-by-year in general, forming an upward trend. Besides, in each year the monthly numbers have ups-and-downs in a similar fashion: low in winter season and high in summer season. Furthermore, the magnitude of local oscillations grows with the upward trend, which is a clear evidence for multiplicative seasonality.

Now ‘AIR_PASSENGERS_TBL’ is a concrete table that holds the time-series data in SAP HANA, and ap_df is the corresponding hana_ml DataFrame that are associated with this table in the Python client.  The data stored in SAP HANA can also be collected to the Python client, illustrated as follows:

Column data types of the table can be fetched as follows:

Since the seasonal decomposition procedure in PAL requires the input time-series data to have a timestamp column of integer type, which is inconsistent with the given hana_ml DataFrame, so we need to add an additional integer columns for representing the order of the time-series data. This could be be realized calling the add_id() function of hana_ml DataFrame, illustrated as follows:

Now seasonal decomposition can be applied to the data with added integer timestamp(i.e.  ID) column.

So a strong multiplicative yearly seasonality is detected, which is consistent with our justifications drawn from the run-sequence plot of the time-series.

The corresponding decomposition result can be visualized as follows: 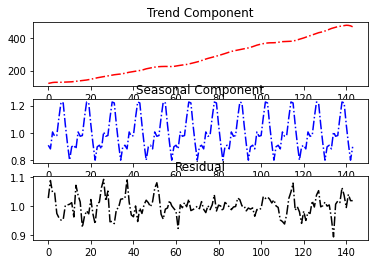 Lastly in this section, we split the time-series into two parts, where the 1st part is from 1949 to 1959, used for model training; and the 2nd part is the data in 1960, used for testing. This step is for time-series modeling and forecasts in the subsequent sections.

We may check the training part of this dataset as follows:

Then, optimal parameters for the triple exponential smoothing model can be determined by feeding it with the training data, illustrated as follows:

Optimal parameters for the trained triple exponential smoothing model is contained in the stats_ attribute of auto_eps, and the content of this attribute is a hana_ml DataFrame so it can be collected to the Python client as follows:

So auto exponential smoothing also finds out that the period of seasonality for the given time-series is 12(see the CYCLE value in the above stats table), which is consistent the result of seasonal decomposition.

We can join the predict values with the ground truth for better comparison.

We see that two accuray measures MAD and RMSE are at least one order smaller compared to the mangnitude of the origin data, so the forecast accuracy is not bad. The small percentage error value(i.e. MAPE) is also consistent with this justification since it is scale-invariant.

Time-series Modeling and Analysis with ARIMA

Then, the optimal parameters of the ARIMA model learned from the training data can be accessed from the  model_ attribute of auto_arima, illustrated as follows:

This results in an ARIMA(1,1,1)(1,0,0)12 model. However, this model is unlikely to be effective enough for modeling the given time-series since it only contains a single difference. We have already observed that the magnitude of seasonal osciallations of this time-series grows proportionally with its upward trend, so after a single difference is applied, differenced values should be larger in magnitude in later phase than in early phase, which violates the stationary assumption for ARMA modeling. This can be justified by the forecast accuracy measures of the trained ARIMA model, illustrated as follows:

So all three chosen accuracy measures are worse than those produced by exponential smoothing modeling.

The result of seasonality test indicates that the (logarithmic) transformed time-series is of additive yearly seasonality, illustrated as follows:

We can re-fit the ARIMA model by using the transformed training data.

The re-fitting process results in an ARIMA(1,1,0)(2,0,0)12 model. Now we make a 12 step forecast using the trained model, and compared the (exponentiated) forecasted values with the ground truth.

So the forecast values(after exponential transformation) are close to the ground truth, which indicates that trained ARIMA model using the transformed training data explains the time-series data very well. This can also be justified by forecast accuracy measures, illustrated as follows:

The result is very close to that of (auto) exponential smoothing, so logarithm transformation plus ARIMA modeling results in a good explanation of the time-series data.

In this blog post, we have shown readers how to apply procedures in SAP HANA Predictive Analysis Library(PAL) to do time-series modeling and analysis through Python machine learning client for SAP HANA(hana_ml). Some useful take-away messages are:

thanks for the valuable blog!

We were trying to rebuild this on our own dataset and it works quite well. However , we might want to include exogeneous variables in the forecast. When doing this  like e.g.:

we get totally out f scope forecast values.

What might possibly be wrong in the model parameters ?

Any hint is appreciated.

Getting erratic forecast values means the ARIMA process drawn from the input time-series is non-stationary. It usually happens because you specify the wrong `order` parameter for ARIMA modeling. So if your dataset is flawless(numerically), you may try the following resolutions:

1. Using AutoARIMA instead of ARIMA to draw the optimal `order` parameter from the input time-series data

2. If you do not want to use AutoARIMA, considering reducing the differencing order(in your ARIMA modeling 2 is used, so use an order less than 2) and rebuild the model

Thanks for the reply !

In the mean time I was able to fix it: In the train dataframe all other columns other than the exogeneous ones need to be deleted. Then it works and gives good results.