Updating your fork of the Developer Keynote repository

If you’ve forked the SAP TechEd Developer Keynote repository on GitHub recently, there have been some additions and improvements. This post shows you how you can update your fork so that it contains all the new material.

If you didn’t see the Developer Keynote at SAP TechEd last month, go over to SAP TechEd Developer Keynote DK100 – The Story and watch it. Hopefully you’ll find it fun, interesting and inspiring. All the code and configuration for everything you saw in that keynote is in a repository on GitHub:

We’ll be digging into this repository on the upcoming Hands-on SAP Dev live stream episode which is now next week Fri 15 Jan at 0800 GMT – set a reminder and join us!

We’ve been encouraging you to fork this repository, i.e. create your own copy of it.

Why have we been doing that? Well, there’s a lot of material in that repository, and we want to help you get the most out of it, with your own copy.

But if you’d just cloned it to a local environment, you wouldn’t be able to enjoy the GitHub Actions-based workflow that is part of the repository; this workflow builds and publishes Docker images (for some of the components) to a registry associated with your own GitHub repository … and these images can then be pulled into the Kyma runtime.

For this to work, you need to run the workflow in your own repository on GitHub, not in the SAP-samples one.

In this blog post, we’ll be using me as an example – I forked the repo last month too, to my “qmacro” GitHub account. So where you see “qmacro”, substitute your own GitHub user.

For those of you who are unfamiliar with the terms “fork” and “clone” in this context, here’s a very brief explanation:

“fork” – take a complete copy of a repository; this makes most sense in a GitHub context, where you may want to start working on something in your own account, based on something in another account. You may even plan to make changes and offer those changes to the owner of the original repository that you forked (via a “pull request”).

Here’s what those relationships look like, in the context of:

A quick check before we update

Before we proceed, let’s take a quick look at the current situation.

I forked the repository last month, to my “qmacro” GitHub account. This is what my forked repository looks like right now:

Notice the last update showing here was 29 days ago (basically, from just before I made the fork).

But if we look at the source of the fork, i.e. the original Developer Keynote repository at https://github.com/SAP-samples/teched2020-developer-keynote, this is what it’s showing right now:

Notice that the last update here was only a few minutes ago (yes, it was me, updating the original repository – that’s not confusing, right? 🤪); also notice that the content is different – there’s a new “.github/workflows/” directory, for example.

Now that we’re clear on forks, clones and the relationship between them, and know that there is indeed content that we’re missing in our “qmacro” fork, it’s time to use those “remote” relationships, with a few git command invocations, to bring the fork up to date.

Clone the “qmacro” repository to a local environment:

Add the “upstream” remote relationship pointing to the original source (moving into the new directory first, and then double-checking all the remotes, because we’re curious):

Pull the “main” branch from that “upstream” remote into the clone, to bring down all the updates (lots of lines redacted for brevity):

Finally, push the now-merged updates in the clone to the “origin” of the clone (i.e. the repository in the “qmacro” GitHub account):

All nice and up to date!

Of course, there’s another brute force way of “updating” your fork – and that is to simply delete it and re-do the fork. But that approach is far too blunt, would cause any changes you’d made to your fork be lost, and doesn’t teach us anything 🙂

I’ve put together a script containing the commands used here, and have pushed that to the Developer Keynote repository too – it’s 2-clone-and-update. Have a look and feel free to play around. If you’re there, have a look at 1-setup – can you tell what I wrote it for? 🙂

We’ll be covering some of this on next week’s Hands-on SAP Dev live stream episode – I hope to see you there! 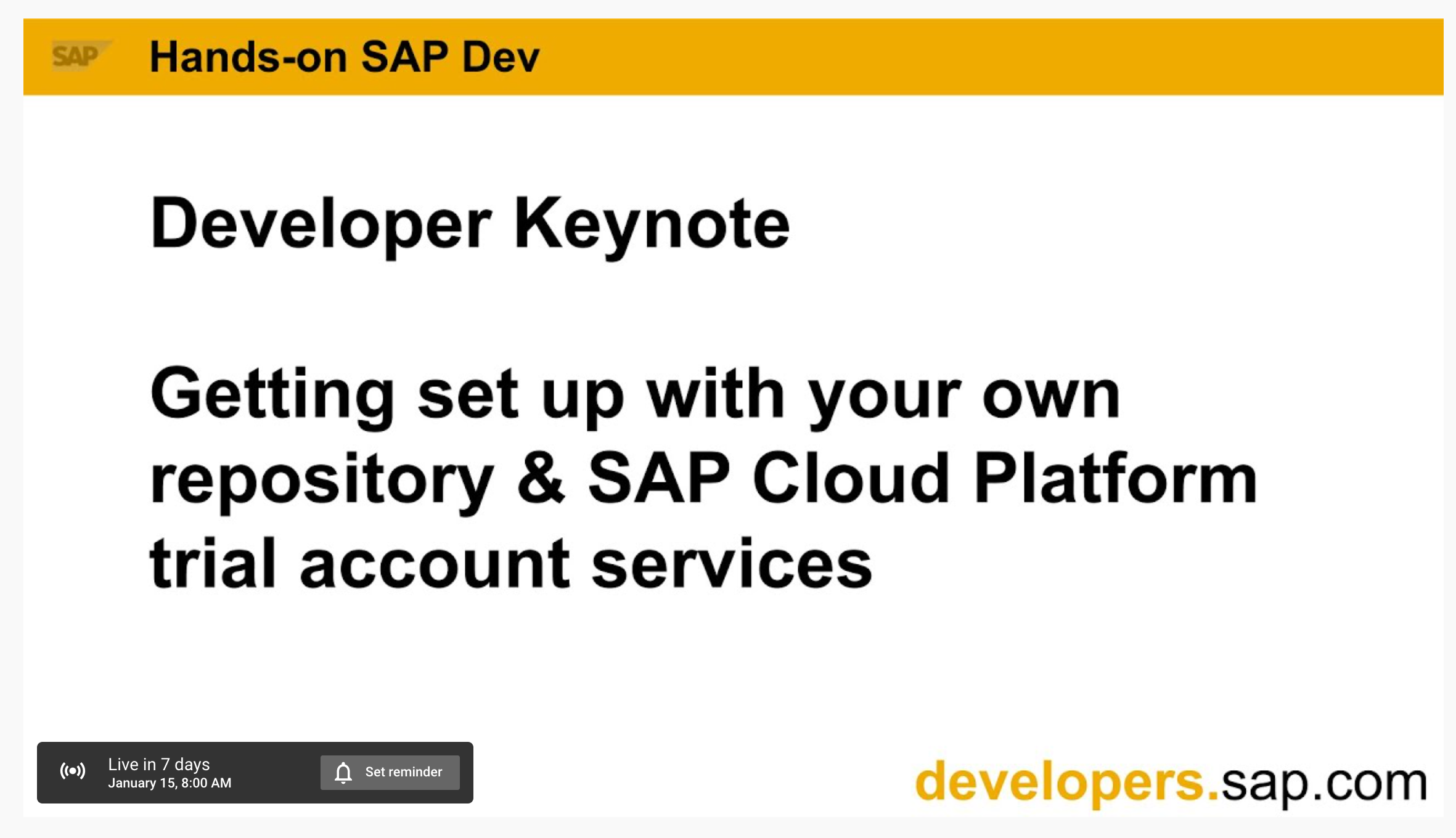 Thanks DJ, that was pretty easy.

I meant understanding the blog was pretty easy. However when I try to clone the repository to my local machine using the git clone command immediately I face the below error  - 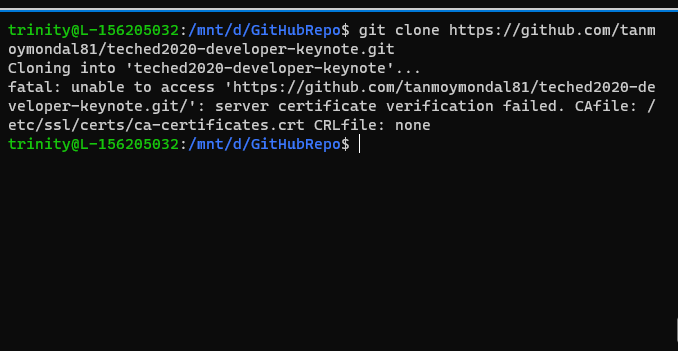 Ah, ok 🙂 Looks like you have an issue with your local machine’s certificate setup, perhaps. Have a look at this SO conversation on the topic, I think it may help: "github: server certificate verification failed" – and then you can adopt it to your local machine circumstance (you’re running Cygwin on Windows, I think?)

Even better! A real OS! 😉 Seriously though, should be more amenable to fixing by following the hints in that SO item.

Were you able to fix? I tried most of the recommendations but it does not work so far. 🙂

It might be worth you both trying something other than the https-based repo URL – do you have any success cloning using the SSH (git@github.com…) approach, or even using gh (I use that myself, it’s great)? You could even try using a GitHub Codespace? 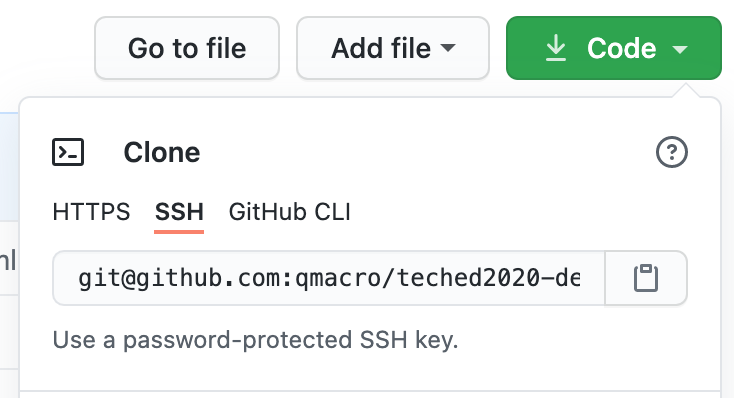 FWIW, I created a 20.04 Docker container, installed git, and tried the clone command, and it ran successfully:

The below link for instructions to be followed for connecting to GitHub using SSH.

I agree using ssh(secured shell) and a passphrase protected ssh key is a more sophisticated way of cloning a forked repository into the local development environment. Thank you for pointing this out.

I learnt about SSH too.

Great stuff, happy to help and even happier to see you successful!