Part 2- In this blog post, I will be going to provide more information on types of hierarchies available with ABAP CDS views.

The additions work as follows:

Orphan nodes are inserted in the hierarchy as follows:

The addition CYCLES define how node cycles are defined. The additions work as follows:

This is the default setting (an exception is raised when a node cycle is detected).

The traversal of descendant nodes is broken at the child node where the node cycle occurs and the hierarchy attribute HIERARCHY_IS_CYCLE is set to the value 1.

If the addition BREAKUP is specified, MULTIPLE PARENTS ALLOWED must also be specified.

The same rules apply to the comparable types as to CDS views.

If start where = ‘E11’ is not included, then the information of directory with company F2 and country US is not shown. The first root node in hierarchy employee E1 is considered as default root. This results in child nodes found for root node which fit the cds view parameters.

When the start (E12) and result nodes (E11) in a tree are not connected through shortest path and the tree is not well-formed, it is recommended to generate a spanning tree. Spantree generates a hierarchy between parent-child using only the shortest paths between start and result nodes. 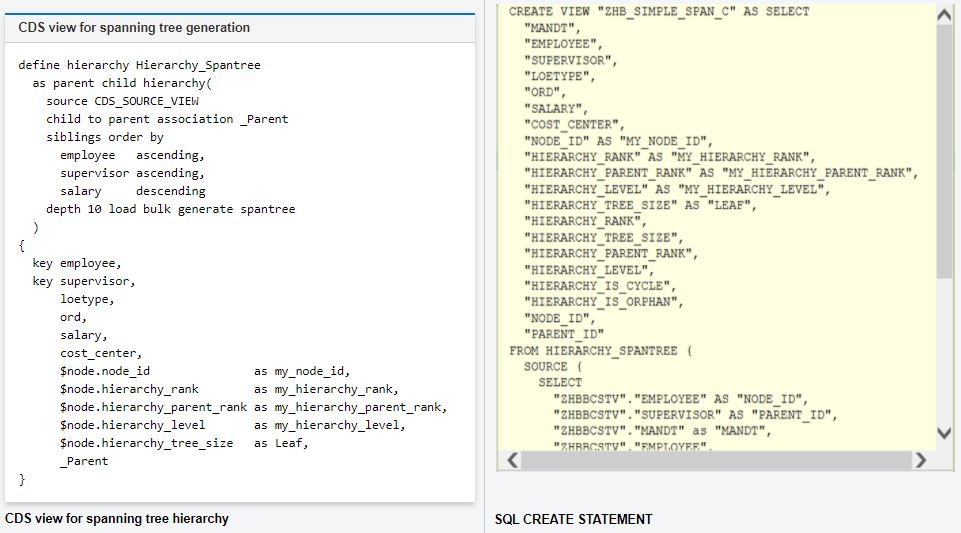 As a best practice, it would be helpful for finding posts in a series if you could place a link to Part 1 of the blog in the introduction to this post.

do you still plan on writing a part 3?

thanks for the interst.

will upload 3rd part with all available features asap.

I'm working on a define hierarchy and I'm able to retrieve the correct result from the framework. However I couldn't find any document that leads me to consume this kind of CDS.

Could you have any idea how to do it?

Thanks for you time.