Welcome to the PART – 3 of this series. Time to get our hands dirty with the System setup and practice with Docker containers. Thanks to my colleague Ujwal Iyer  for helping me out in co-authoring this series. In case, if you had missed out on Part – 1 and Part – 2 please follow the links accordingly.

Without wasting much time we will get in to the setup details.

Dockers can be installed on the following platforms 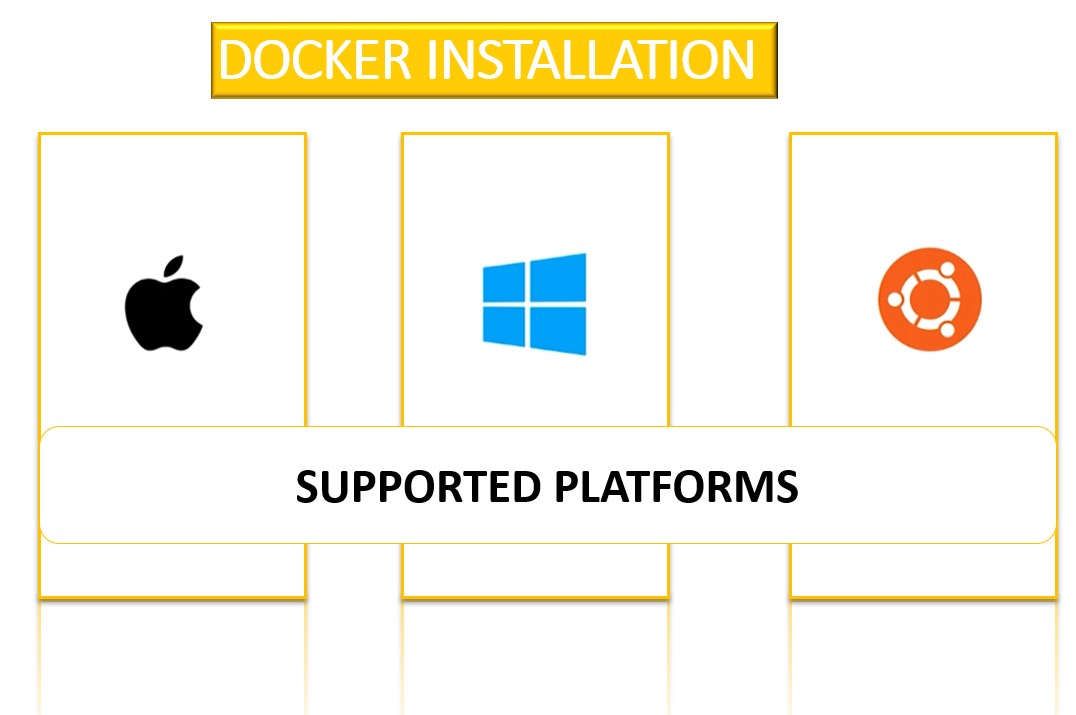 The above-mentioned link will basically download docker tool box for Mac. It will install docker compose, docker software and other components of docker. Just sit back and relax 😊 nothing else is required from your side.

The installation on ubuntu is quite simple.  In this post, we will be using Ubuntu version so that you can get a full picture. Our docker would be up and ready once few commands are executed. Let us open a new terminal now to connect to my ubuntu machine and from there onwards we will install docker. This is the entire lifecycle of the docker. If you have worked on Github, then it is very similar. Whenever you must start working on a codebase, you have to pull the codebase from the central repository and push it back to the central repository. Central repository is the place where it holds all the code base for your org. Similarly, in Docker, we have Docker hub. Docker hub would contain all the container images that are open source images that are present. For ex: you could run a container on Ubuntu, Cent OS, Alpine etc.. all these are present in docker hub. What you download from dockerhub is the image of a container. First of all pull all these images from the docker hub to your local docker engine. When you run the image, it becomes a container. You can also stop a container. You can also delete a container.  This is a summary of how what happens inside a docker. And there is more to it, we will see as we move along in the session.

Now, we have understood the following

Common docker operations – which is a must for learning basics of dockers.

Let us perform some common docker operations in our docker system that we had installed.

This will download the container image from docker hub automatically. We have just pulled the image. Now, we must run the container. For us to verify the image has been pulled from the system or not, we use the following command

Notice the size of the image is just 86.3MB. If it had been a direct Ubuntu OS it would have been around 1.5-2GB. Now, we have to run the image

Command to run the image

To view all the running containers, we pass on the following command,

Now we need to work with the containers. How do we execute commands within the containers? For that we use docker exec command. Apply docker ps command and check for running containers. Note down their ID.

For example: Give the following command

Because the sudo library is not installed in the container. Only the bare minimum libraries are available and nothing else will be available. That is why sudo doesn’t even exist.

If we want to stop a container,

We can also kill a container (where stop doesn’t work – Force kill) we can use the below command,

Now what we have to do if we have to remove a docker Image from the system?

The image will be removed only from your local system (VM in our case) where docker is running. This will not remove the image from the repository.

These are some of the basic common docker operations that we do in day – day life. Now we would have got a taste of what docker is, why and where it is used.

Now that we are done with the basic Docker commands, we will proceed with the creation of docker hub account

We will do now some changes to the container and save it.

we again go back to where our machine where docker was installed. Please execute the below command to directly download the ubuntu image (from docker repo) and start the container.

You type “Exit” and come out of the container and do a “ls” you will see different list of directories.  Why? Because it is the VM’s directories and you have exited the container.

We will try to create a new directly inside the container. Execute the below given command

Again, do a ls command to check whether the directory created is there or not

We will log on to the container again using the following

Give the command “ls” and check whether the directory is there or not.

How to save the changes? So that even when we delete the container and rebuild the image, this will be retained?

now you should be able to see 2 images. One is Ubuntu and another one is “Mynewimage”

Using the previous commands, you can run the image and start the container. You can log on to the container using the newly created image and check whether the directory “App” that we had created is available or not.

Now in case if there are more containers, we do not need to perform the remove command by giving out the individual container ID, we can use the below given command

The scenario that will be done is listed below

Execute the following commands sequentially in the Virtual machine

Type the above command “Exit” to exit the container.

Now we have saved a new image locally to the virtual machine.

now we have to run the newly created image

Basically what happens is we have installed HTTPD server not on the VM but on a container. We are able to reach the port using the mapping that we had provided

PUSHING IT TO DOCKER HUB

You would like to share this new image with the world you can sign up for an account on https://hub.docker.com/. After verifying your e-mail you are ready to go and upload your first docker image.

Username: Skugan <Please enter your username used for signing up>

A good choice for a tag is something that will help you understand what this container should be used in conjunction with, or what it represents. It could be anything but meaningful so that others can understand while they try to pull your image from docker hub.

Now we have understood a simple end – end docker life cycle management like how to create an image, run the image, delete/stop/start the container, save changes to the container and push it to docker hub.

Hope you had a great learnt learning in understanding the basics of containers, why it is used, where it is used and how it can be used with simple exercises. Now there might be lot of questions again coming to your mind after getting familiar with container?.

If you are getting some of the questions mentioned above then CONGRATULATIONS, you have understood the concepts very well.

We will try to post another series of blogs explaining about DockerFile for automation, Kubernetes (container orchestration), Public Cloud vendors Containers and Kubernetes Management as well. Till then I would suggest you install dockers and start practicing by creating images and try to publish it in your docker hub repository. See you all soon with a new set of blogs. Thanks! Happy Learning!!

Simplification at its Best!

Thanks for sharing and will be looking for more contents from you going forward!

Your 3 series blog is wonderful and complete , firstly explaining in laymans terms and then providing hands on example .  I hope to see your blog on Kubernetes  soon .

This is really a helpful blog I am really impressed with your work, keep it up the good work