The Part-2 blog post covers the preparations on the Kubernetes cluster and the SLCB tool(Software Lifecycle Container Bridge).

It is imperative to expose an external IP address for accessing SAP Data Intelligence in the Azure Kubernetes cluster. Therefore, in the last step, post all the settings- the application will be exposed to the internet. If so required, the Azure built in security mechanisms like Network Security Groups can still be used to control the access. 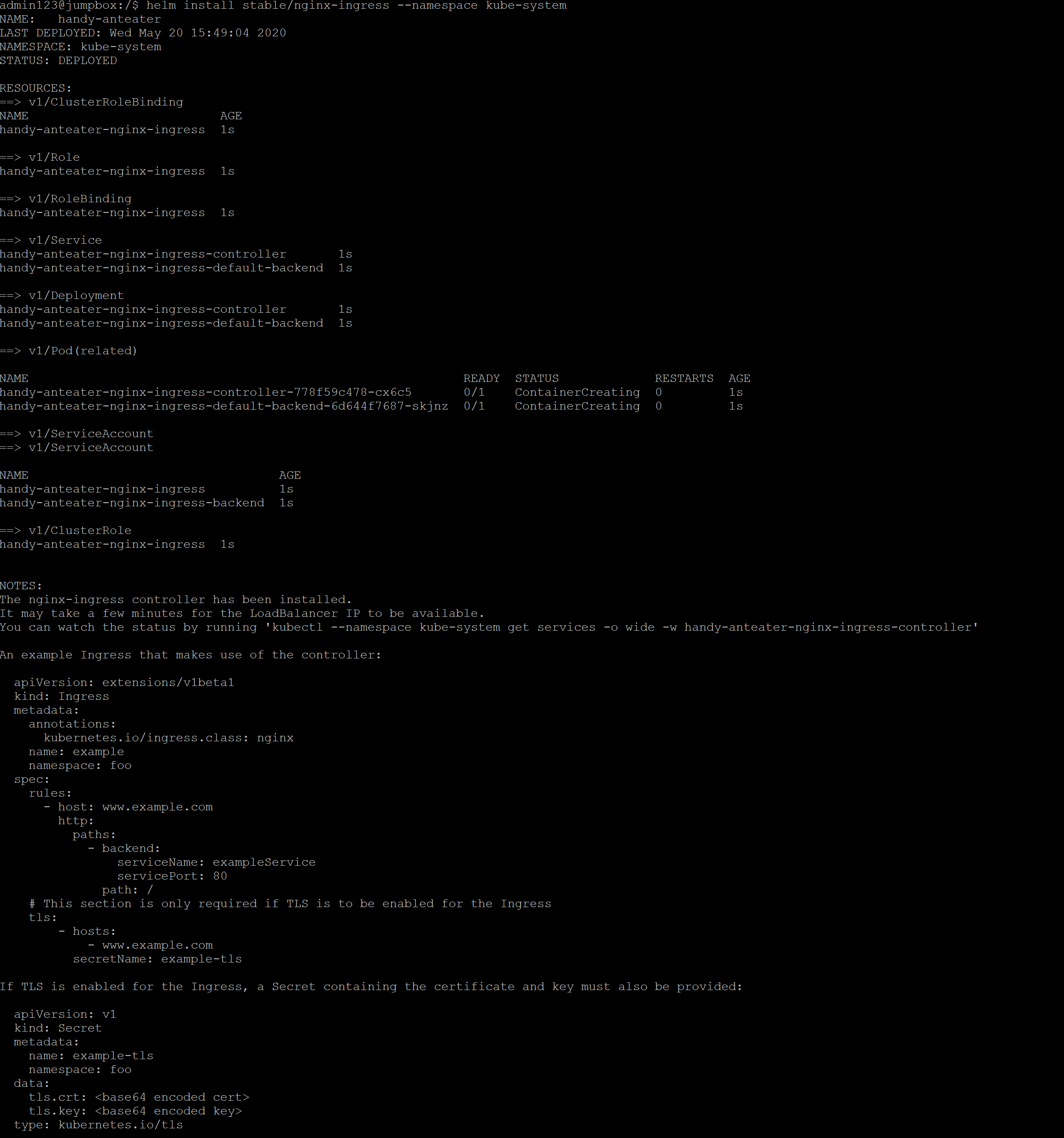 It is observed that under the “kube-system” namespace the Ingress controller has been deployed. And It is also in “running” state. So, all is good till now.

Since DI needs to be exposed to the internet, the ingress controller is created as an External load balancer. Please login to Azure Portal- there you will see that an external Load Balancer being created in Azure, this would already be configured with the right backend pools and the required routing rules. Finally a public IP address would also be assigned automatically.

Now there will be 2 resource groups with identical names as soon as you deploy the Kubernetes services. Please navigate to the resource group starting with prefix of “MC”, and select the ingress load balancer. The other load balancer is for the for SLCB, and this has already been explained in Part-2 of this blog post series. 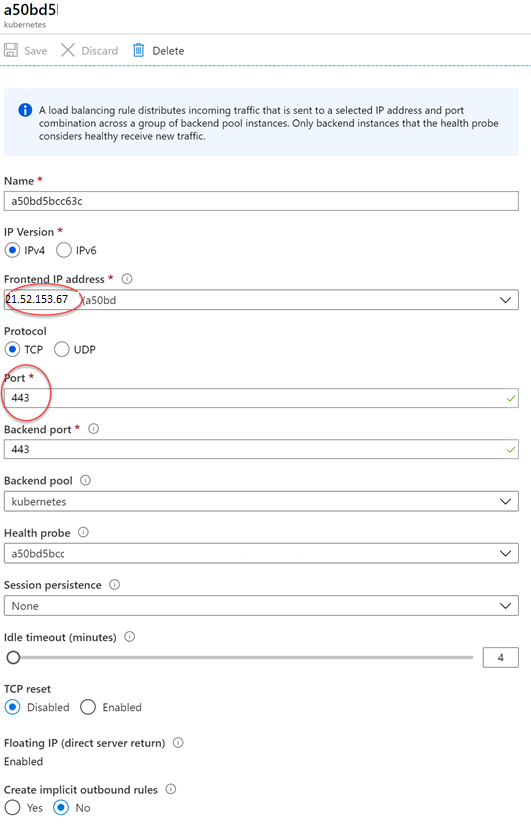 As mentioned in the above screenshots, the IP address of the load balancer can be retrieved by navigating to the portal. The other method is to execute the following command. This command will retrieve the IP address of the ingress controller and store it in the public_ip variable. This variable can then be printed with the echo command.

Now that external IP Address has been assigned to the load balancer, we can proceed to setup a DNS for this IP address. Here the DNS will be setup by using Azure’s in-built DNS services.

There are two ways to assign the DNS name to IP address. Execute script from the SAP Data Intelligence installation guide or go to the Azure Portal and change the settings in there. Here the 2nd approach will be taken. 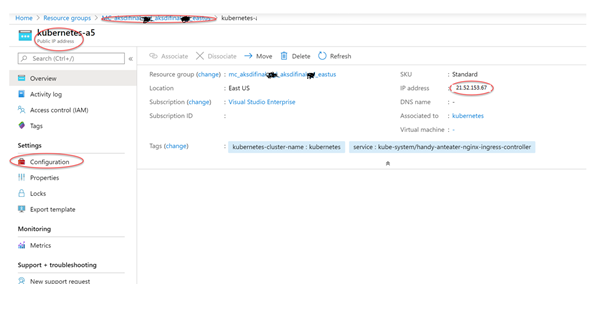 Let’s create a self-signed SSL certificate and deploy it to the cluster. Change the <FQDN> to the full domain name defined above, for example dataint.westeurope.cloudapp.azure.com and the <namespace> to the namespace chosen during the SAP Data Intelligence installation. FQDN is the DNS name that you had assigned to the load balancer in the previous step.

Install OpenSSL if not already there in your Jumphost- as this will be used to create a self-signed certificate. As a first step, let’s create a private key. Please execute the command below to generate the private key.

As a first step, the private key for the certificate is created and saved in the /tmp/ folder under the name tls.key. This key will now be used to generate the certificate.

Now the certificate has been generated. The next step is to create an ingress rule using a YAML template. The YAML file is used to dictate how applications behave deployed in a Kubernetes cluster.

Let’s create a configuration script for the ingress and save it on the Jumpbox. The script listed here in the Installation Guide (Point #4) has been improved with an annotation. Please follow the steps given below. The filename used in the steps below is vsystem-ingress.yaml- but any other file anme can also be used.

Do NOT replace the <DNS_REPLACE> in the below mentioned script.

Execute the following commands to activate the ingress. Replace the <dns_name> and <namespace> according to your previous choices:

<dns_name> = The DNS name assigned to the load balancer.

<namespace> = Kubernetes namespace given during SAP Data Intelligence installation in part-2 of this blog post series.

Log in using the credentials defined during the installation.

That’s all, folks! The installation is complete- SAP Data Intelligence can now be accessed via the browser. Hope you followed through all the 3 blog posts and were successfully able to follow all steps listed here.

for those using traefik ingress controller:

use IngressRoute (not TCP) with "scheme: https" in its service definition 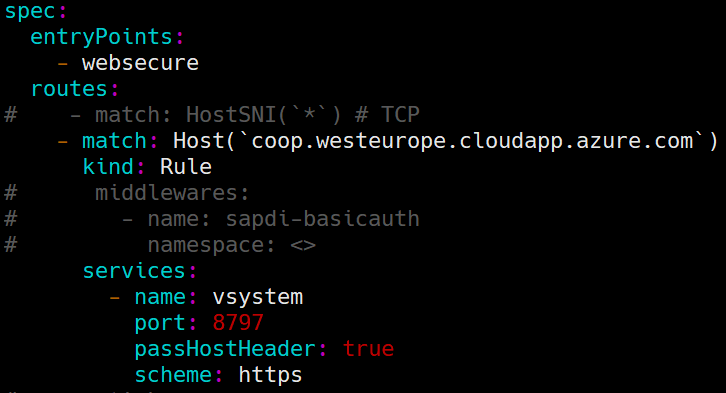 We had error while installing SAP DI and now it has been fixed. I am adding the correction in the step: Install NginX Ingress Controller, before running “helm install stable/nginx-ingress --namespace kube-system” please run below command which is at starting step only.