Dispute management is an area in Finance which involves a lot of manual effort, especially in B2C companies. Receiving customer complaints, logging them as dispute cases in SAP, processing of the cases and subsequent actions such as issuing credit memos are various time-consuming manual activities involved in the process, which has the potential for automation.

Therefore, we have developed a solution which is leveraging SAP Conversational AI and related SAP Cloud Platform technologies to handle Dispute cases. Please go through the business blog post , for more details on the business driver of the solution, and a video demo explaining the customer view & Sales agent view of the solution.

In this blog post, I would like to give a detailed overview of technical architecture and how each of the solution components are integrated.

How the chatbot is interfaced with S/4HANA Dispute management and iRPA?

Chatbot is designed using SAP Conversational AI and it consists of various intents, entities and skills. I assume you all have a basic idea of modelling a chat bot, hence the focus of the blog post is not to explain how each intents and skills are built, instead to touch base on how the chat bot is interfaced with S/4HANA Dispute management and iRPA.

In our design, chatbot is calling external services / systems, using one of the below options:

In the latest version of SAP Conversational AI, there is a feature called “System alias configuration” under Settings tab of chatbot. Here you can maintain the base URL & authentication details, to enable different API calls.

We have maintained system aliases for CPI connectivity, Node JS call and SAP iRPA triggers, as depicted below: 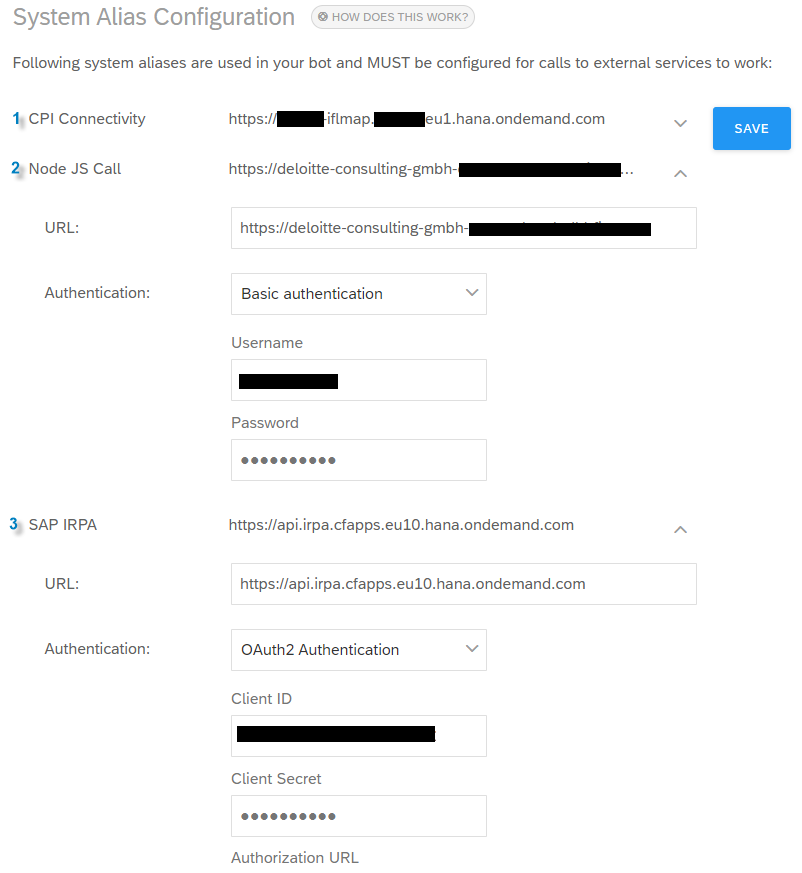 We have used CPI as a middleware, to route our API calls from CAI to S/4HANA on-premise system. Usage of CPI have multiple advantages:

Below screenshots give an idea of how the POST calls were handled in our use case: 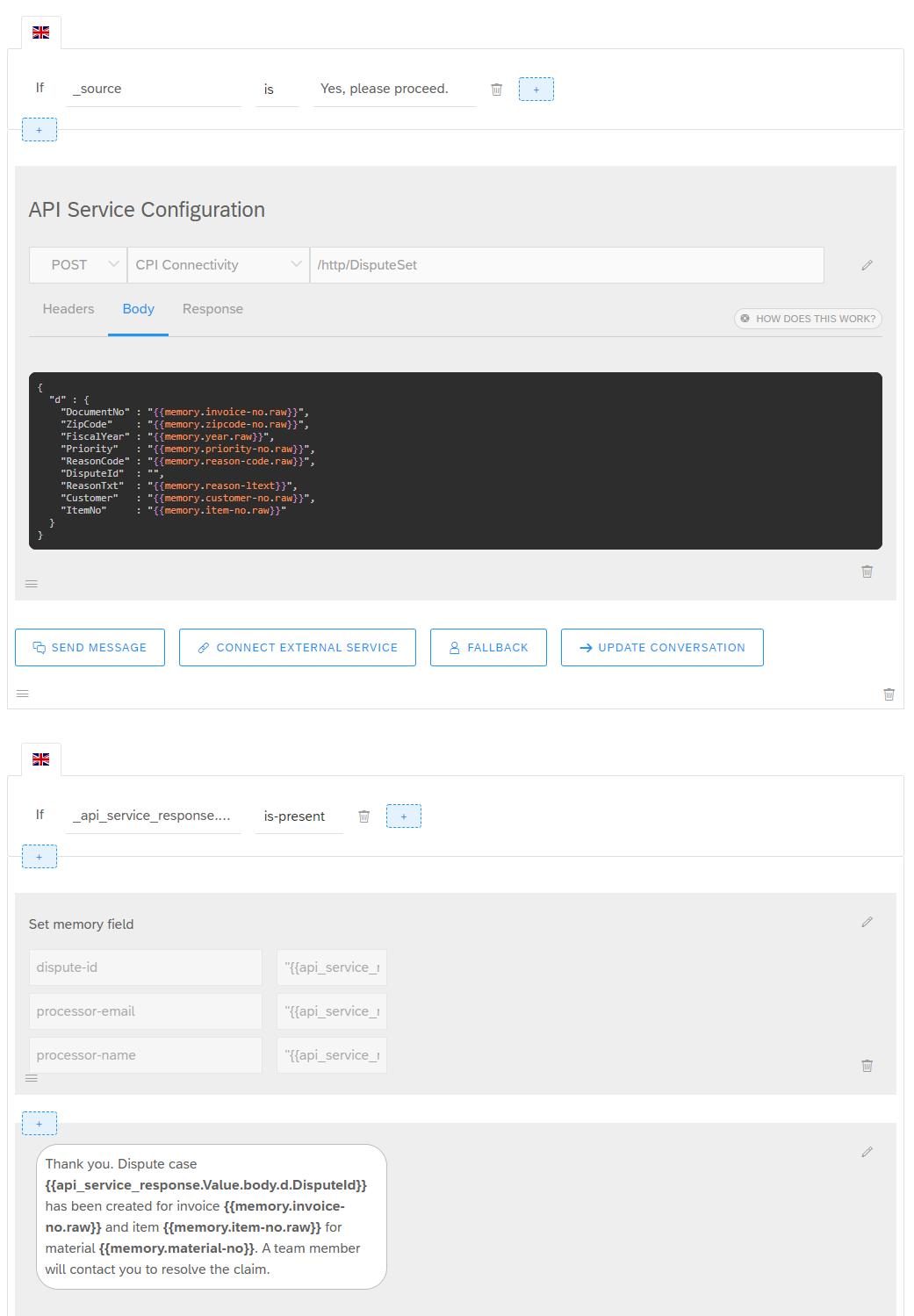 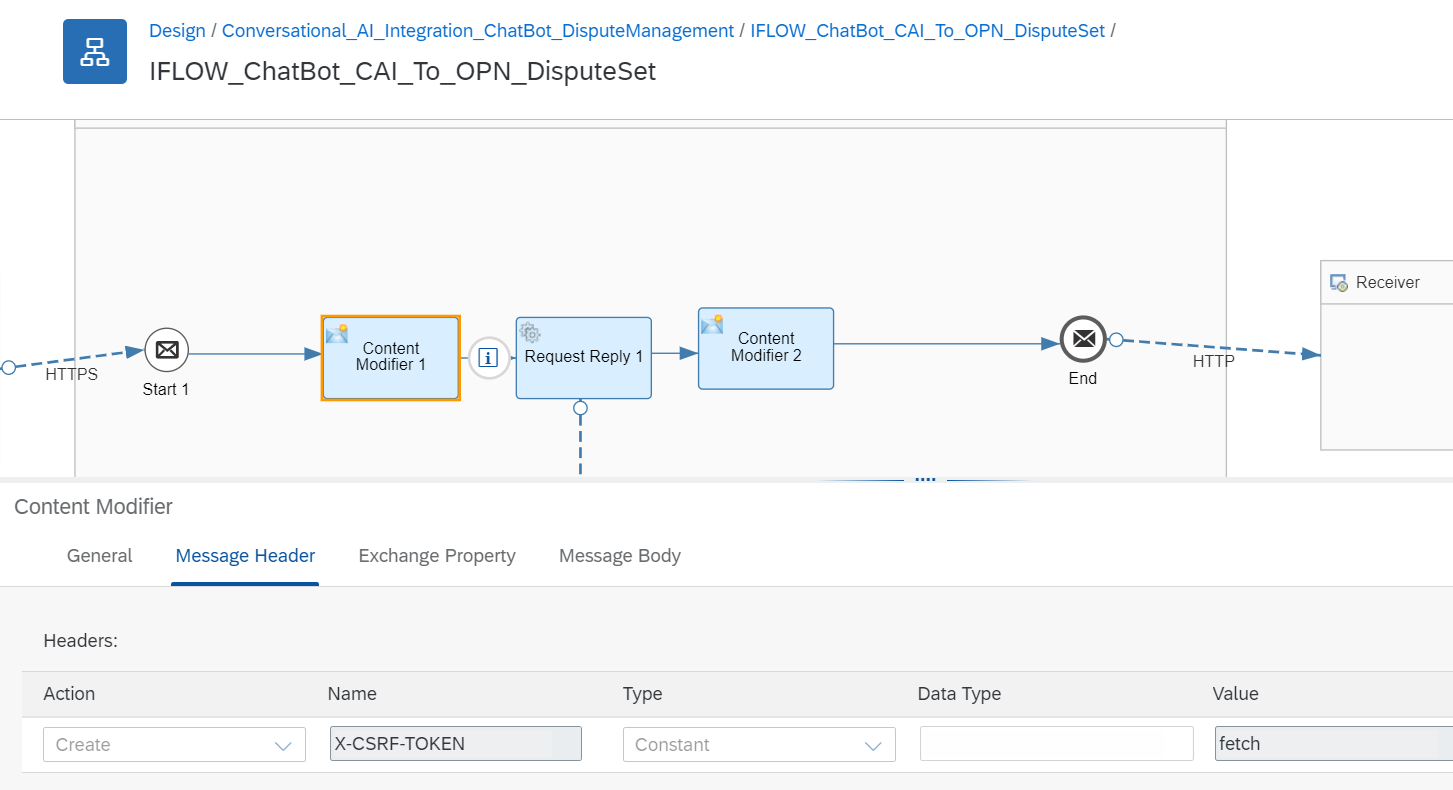 Multiple Integration Flows (iFlows) were designed in CPI to achieve the overall integration for this use case, such as Customer Info, Dispute set, Invoice details etc

SAP CPI is integrated with on-premise S/4HANA with SAP Cloud Connector. SCP sub-account which hosts CPI service is maintained in the Cloud Connector, along with access control to S/4HANA system. This enabled a secure connection between CPI and S/4HANA for the consumption of required ODATA messages.

There are certain cases where you need to format the result list from S/4HANA system, to a specific format in the chatbot, so that users get the list in an elegant manner. For this purpose, we have used Node JS scripts & deployed it in SAP Cloud platform. The scripts in turn triggers a call to S/4HANA on-premise system via CPI, retrieve the list output , format it as per our needs and send back to the chatbot.

See below an example where Node JS scripts were used to format the output: 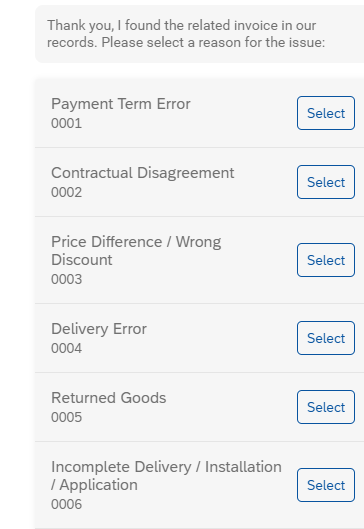 We have integrated Intelligent RPA with Conversational AI, to perform certain activities, triggered out of chatbot.

For eg:- Once the dispute case is created, Sales agent has the option to use the chatbot and initiate follow up actions, such as creation of credit memo. 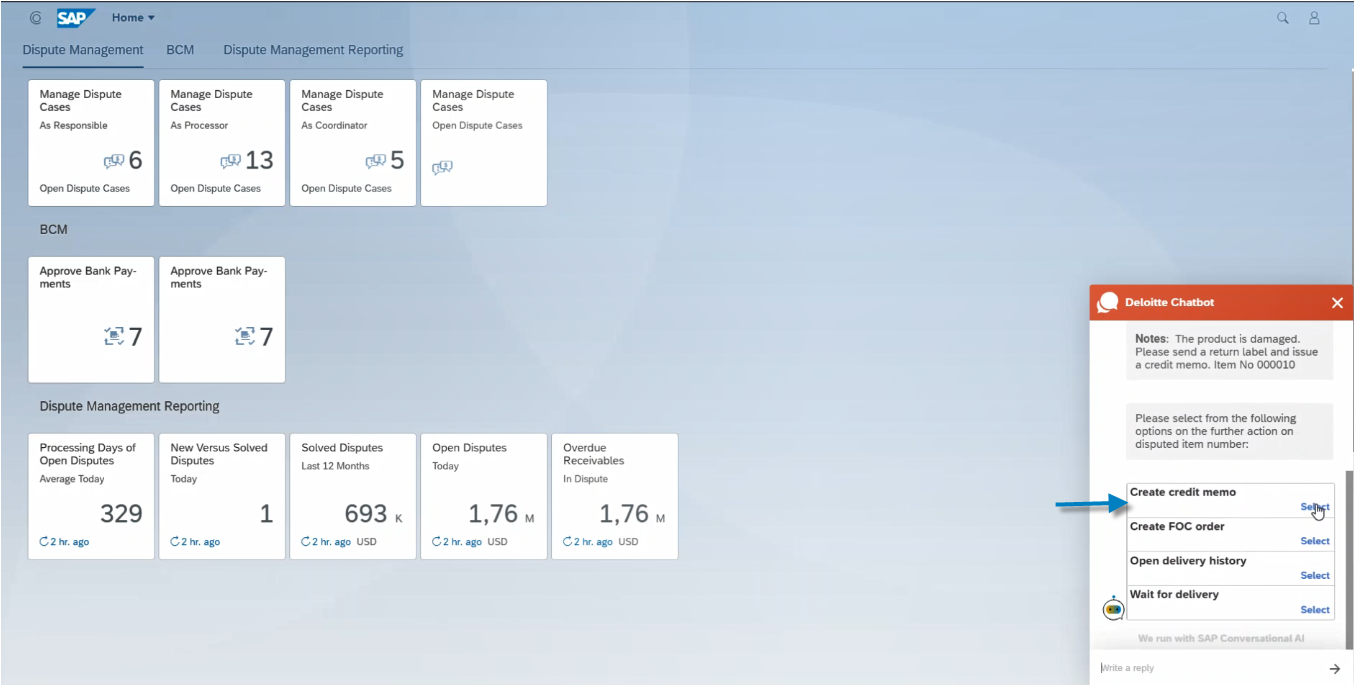 From the Conversational AI, RPA calls are triggered, similar to an API call. 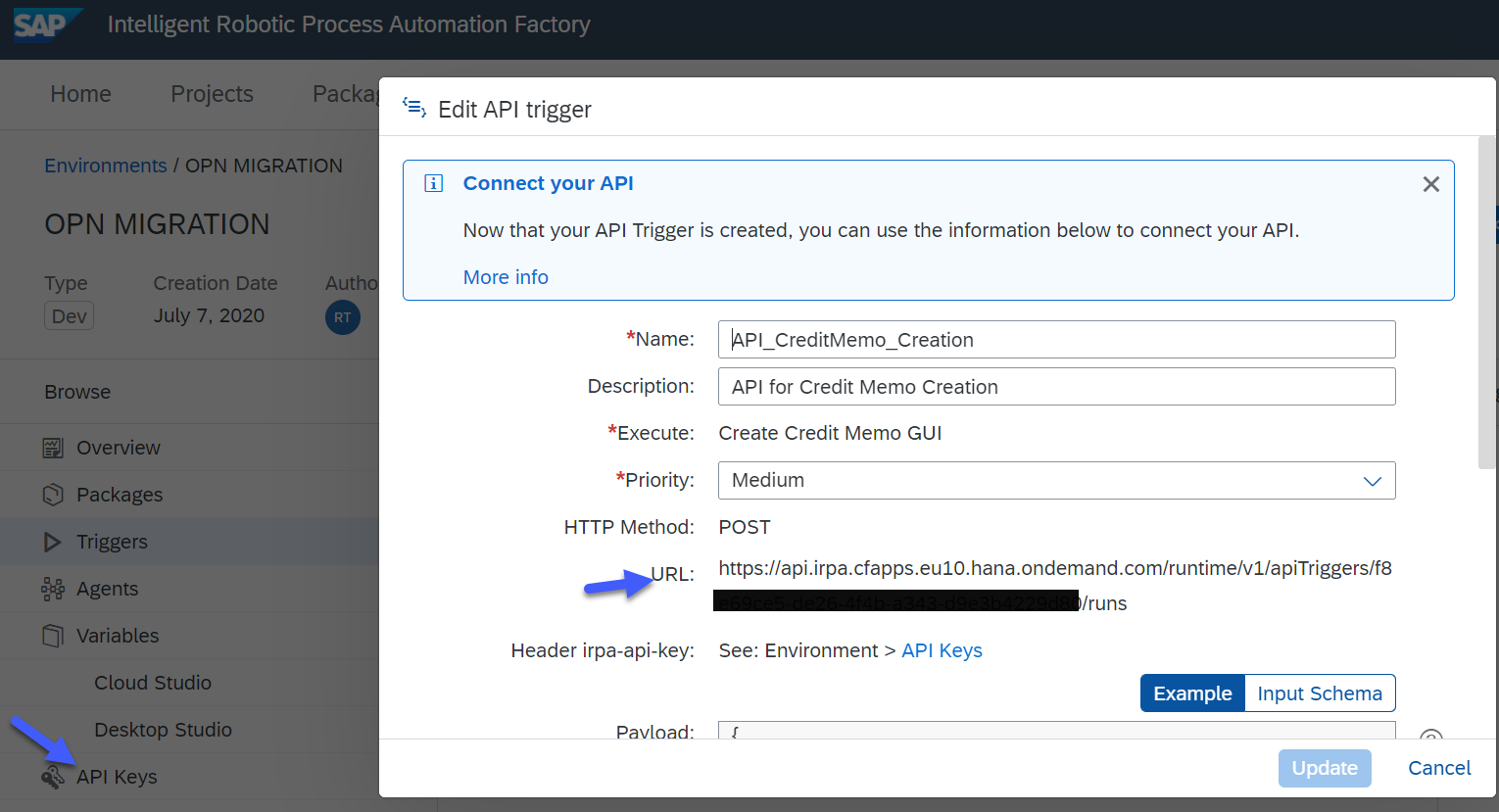 How the end users interact with chatbot?

Chatbot is designed to interact with customers as well as Sales agents.

Facebook messenger channel connection can be established by following certain steps such as creating a Facebook page, creating a Facebook app via Facebook developers page, get page token & app secret and maintain it in CAI channel. Subsequently maintain the call back URL and token, and you’re ready to go. 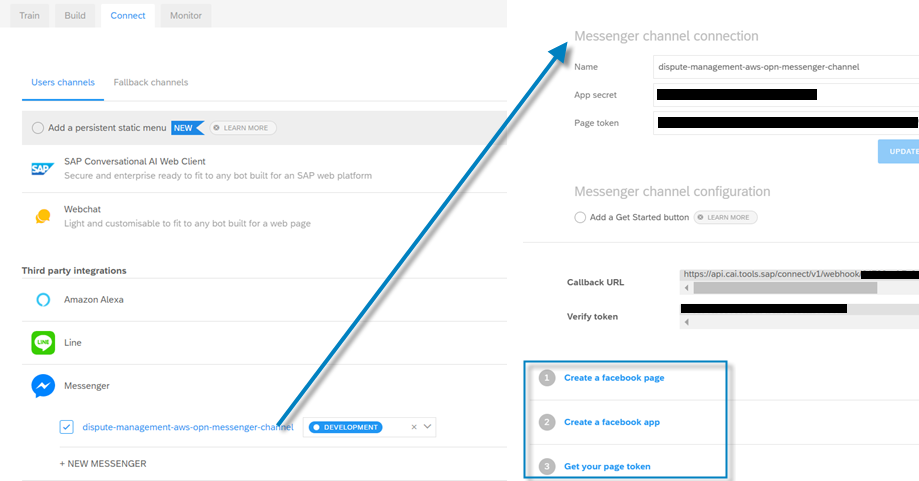 Sales agents are SAP users who have access to S/4HANA on-premise system & Fiori launch pad. They can use the chatbot and initiate follow up actions, such as creation of credit memo. We have enabled a custom button in Fiori launchpad , which helps the users to launch the chatbot (refer Figure 11).

Following steps were executed, to enable a custom button on Fiori launchpad, which opens up the chatbot: 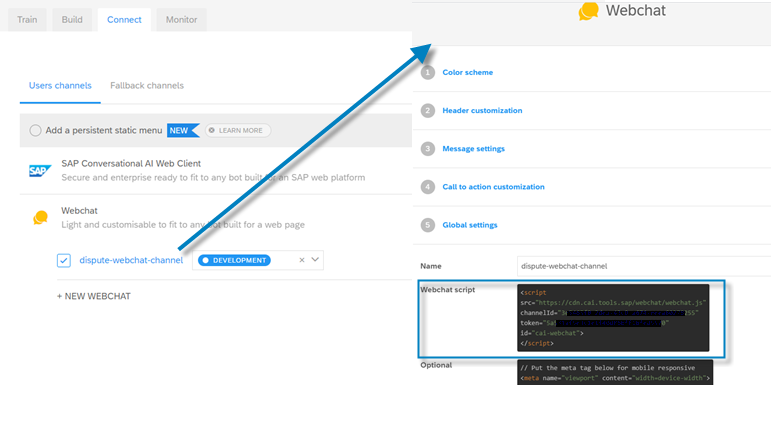 We have demonstrated the entire solution in an SAP Community call, recording of the session is available here. Please review the session if you need more details.

For more information on SAP CAI and SAP Intelligent RPA:

Thanks Pierre COL for the feedback !!