If you are looking for something fun yet educational this holiday season to play around with, might I suggest this new SAP Cloud Application Programming Model sample that was just released:

I was recently looking around for a fun yet decently complex sample data model to reuse in an CAP example. I stubbled across SWAP – the Star Wars API. It had the interesting level of complexity I was looking for. It’s filled with many-to-many bi-directional relationships. Yet the data model is easy to understand on the surface.  There are Star Wars films that contain planets, characters, starships, etc. I also thought it make a good example of complex Fiori based maintenance. Going in I wasn’t exactly sure how the many-to-many relationships would work with Fiori Draft and deep editing; but it turns out the functionality worked out nicely.

Although the Star Wars API had been abandoned, this also provided a good challenge. I kept the original project’s data files as JSON and wrote converter scripts using CAP CQL to convert the data into the new version of the data model.

Overall I think this sample provides examples of a lot of deeper and more complex topics in the SAP Cloud Application Programming Model and Fiori area; but does so with some data that is a bit of fun to play around with.

SWAPI – the Star Wars API. This sample is based upon the sample at swapi.dev which in turn was based upon swapi.co. The original source can be found at https://github.com/Juriy/swapi.

The original project was a data set and data model based in Python that exposed data from the Star Wars movies sourced originally from the community wiki: Wookiepedia. It encompasses data about the People, Films, Species, Starships, Vehicles and Planets from Star Wars.

The projects described above have fallen out of maintenance but still offered the opportunity for a fun yet challenging learning experience from a non-trivial data model. The many bi-directional, many-to-many relationships with the data provides a good basis for an SAP Cloud Application Programming Model and Fiori Draft UI sample.

I’ve used the new openAPI functionality in CAP to generate both the Swagger UI test framework but also entity diagrams for the data model. 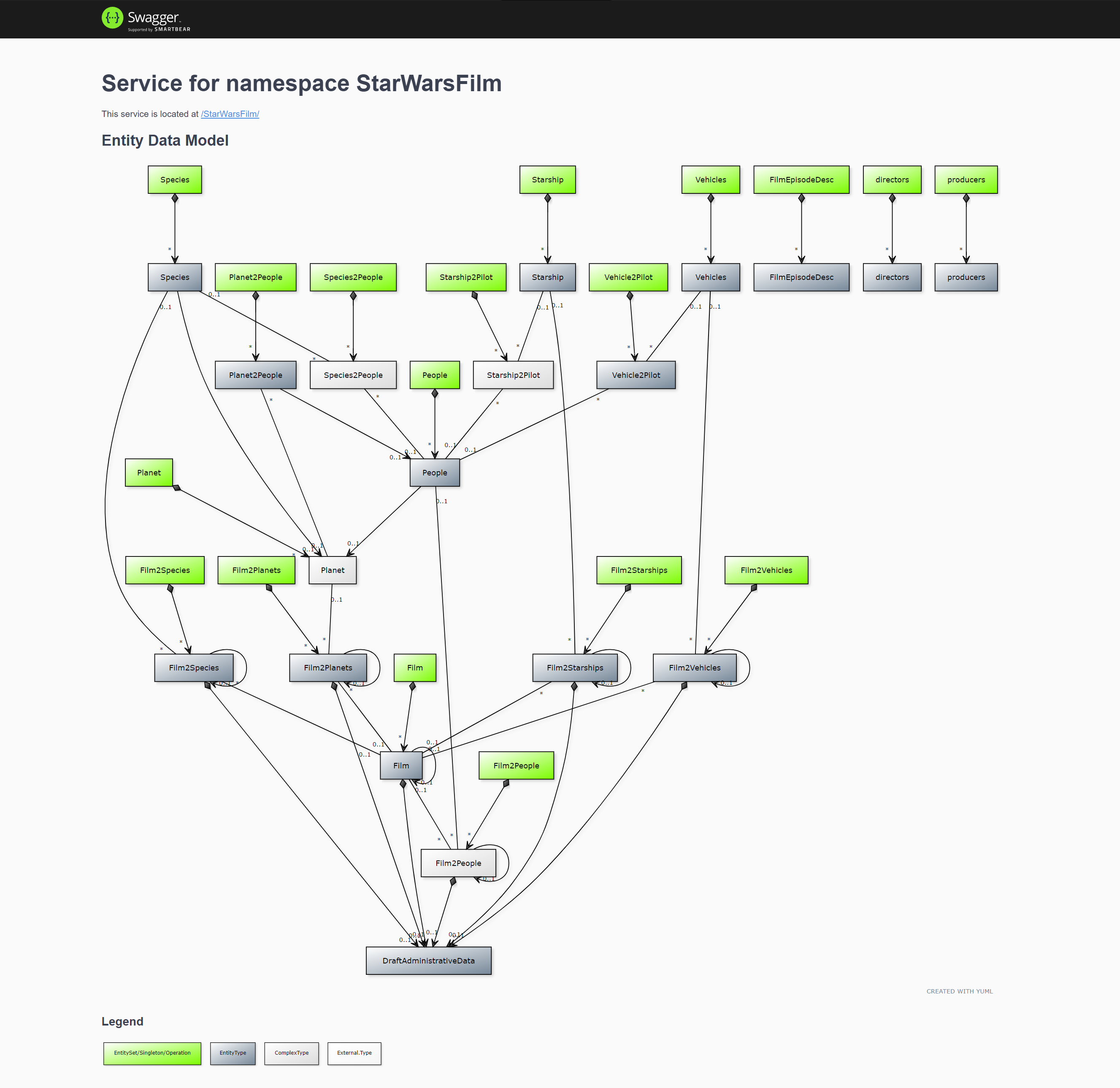 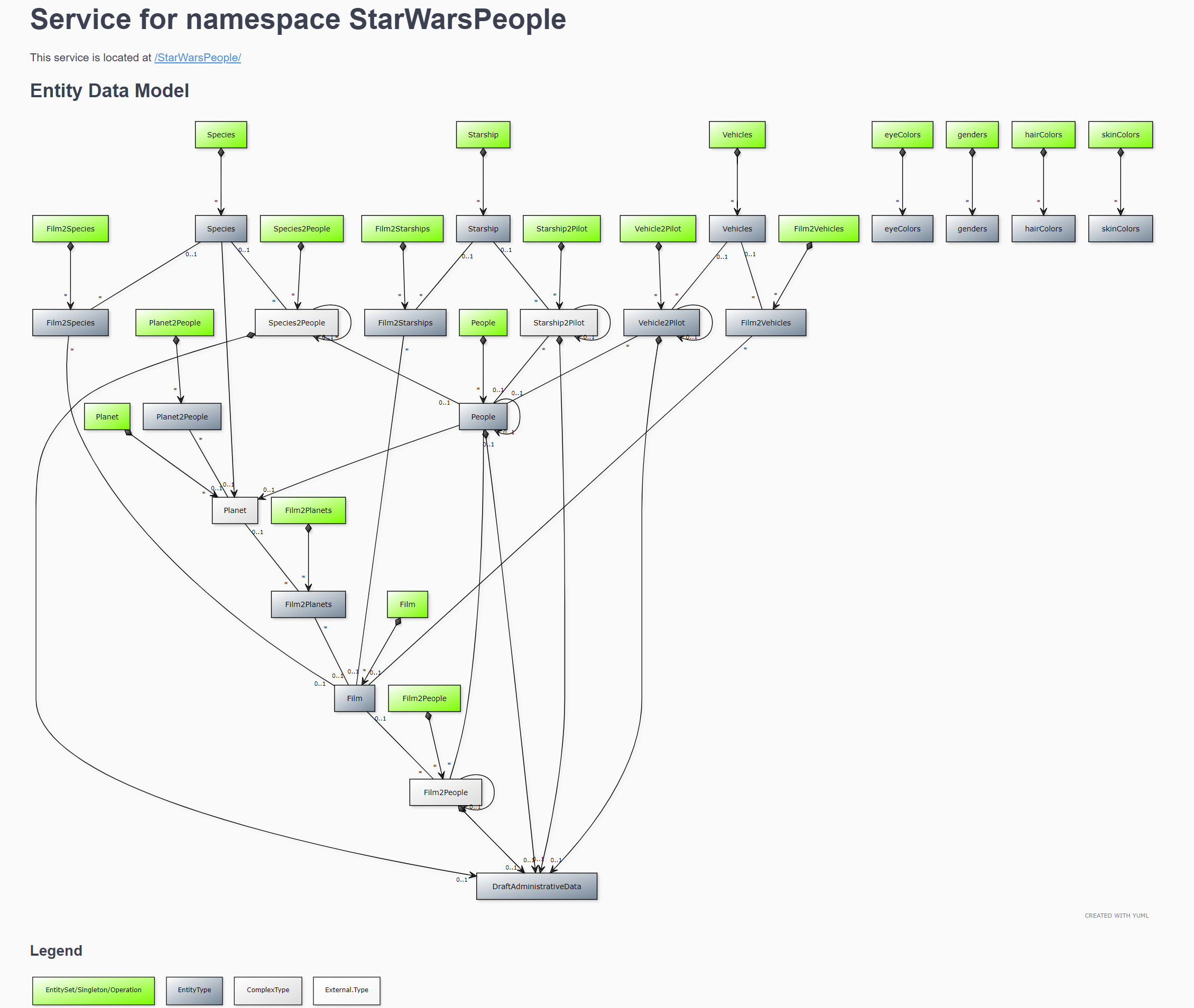 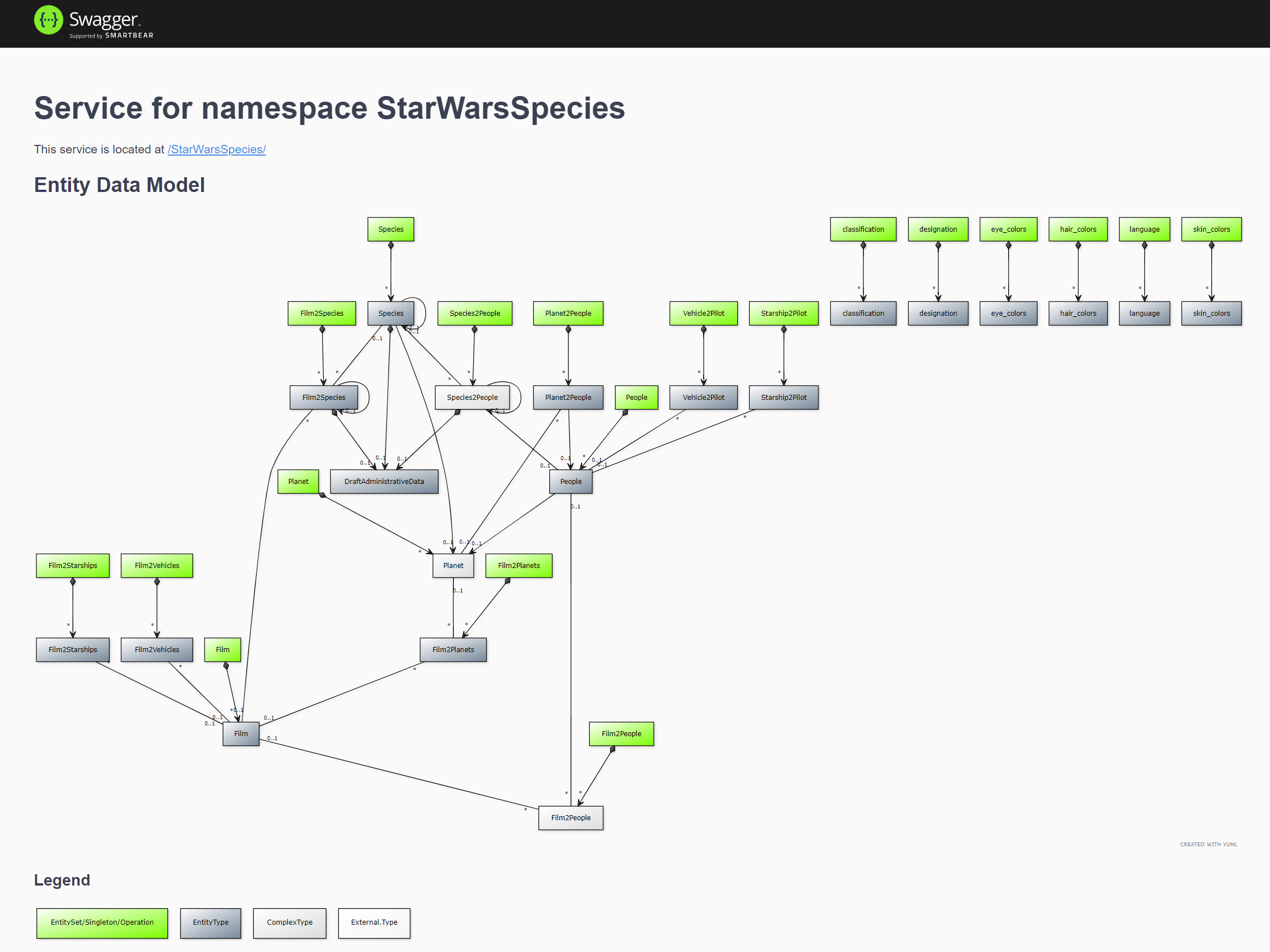 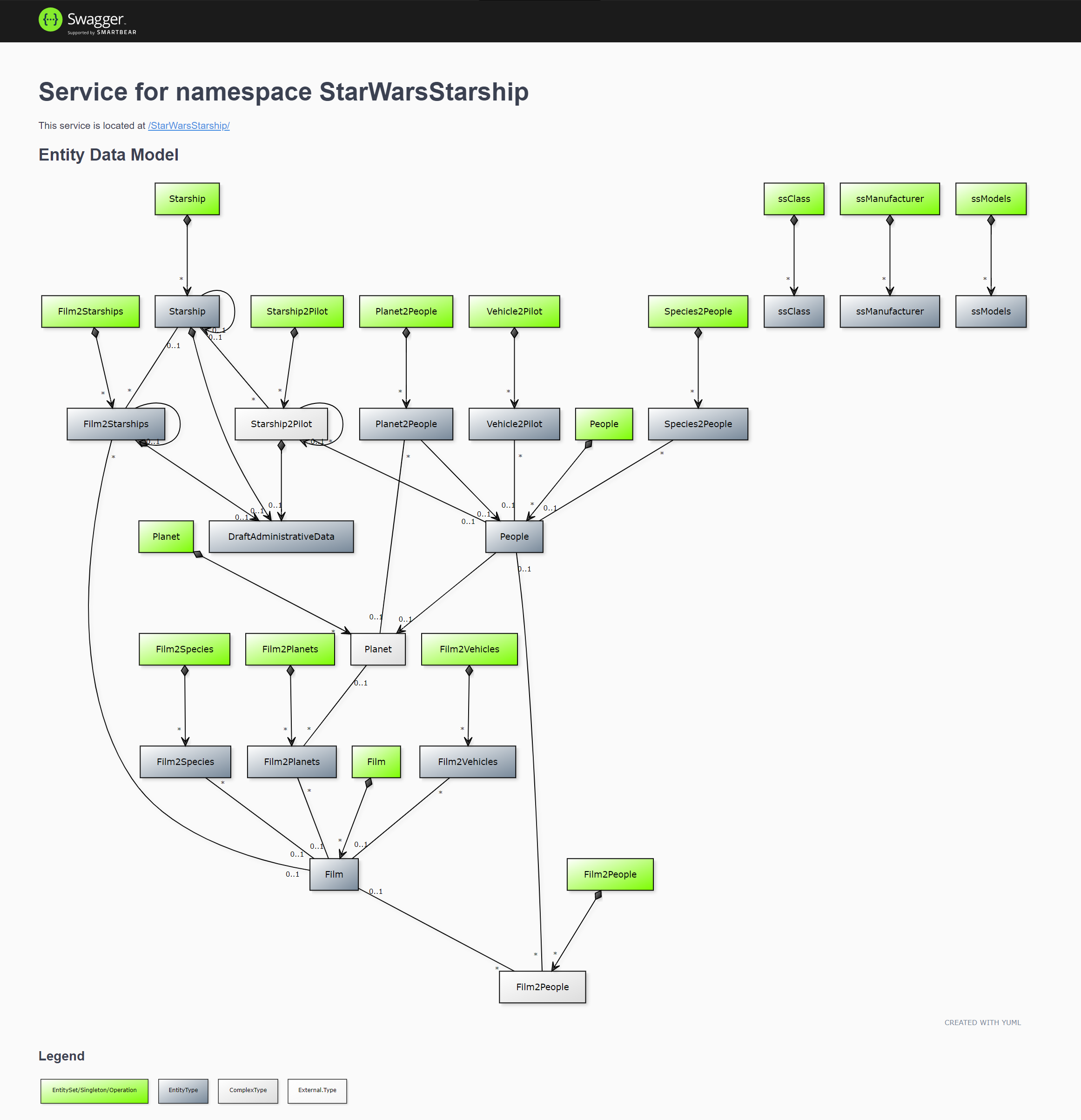 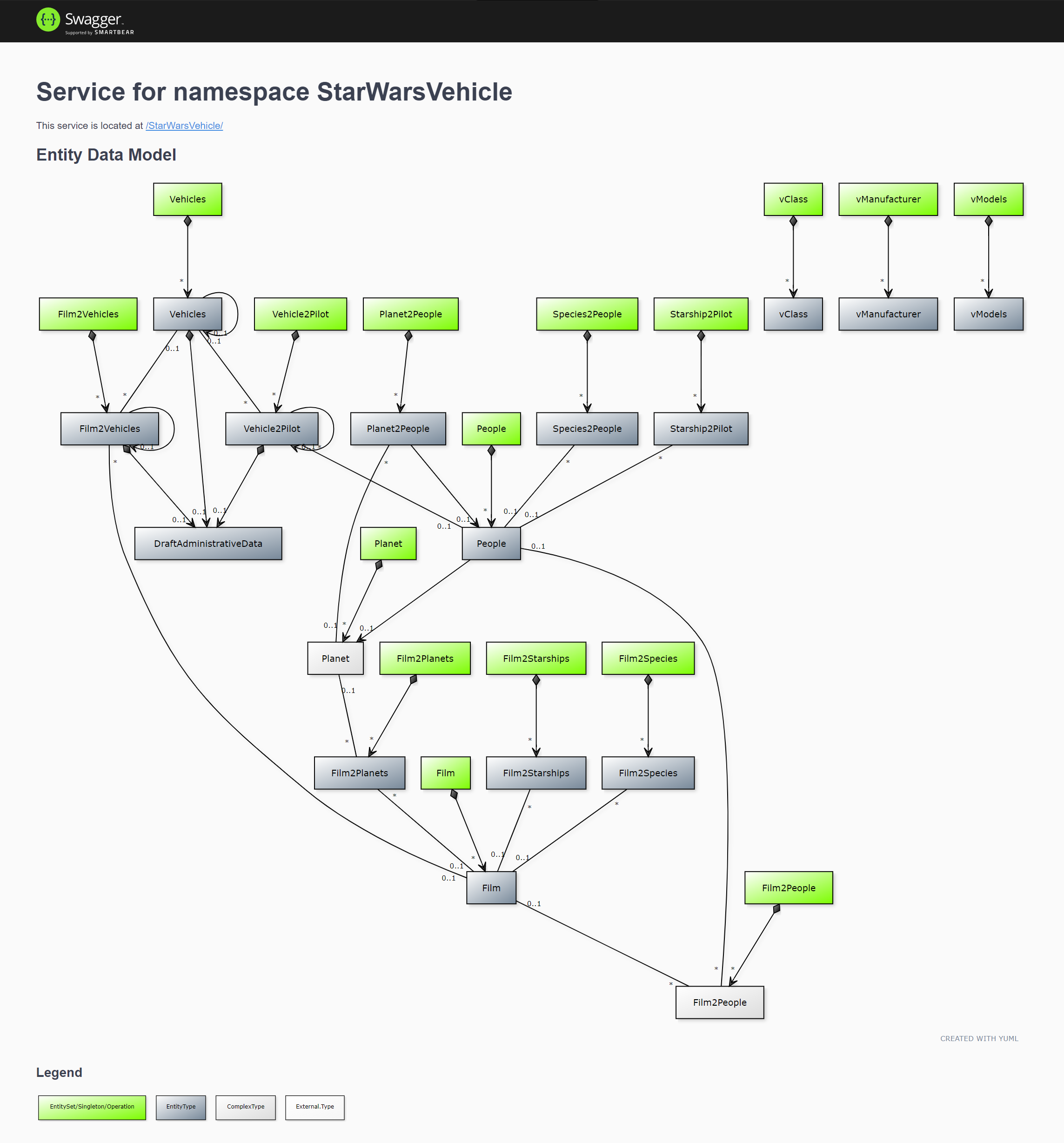 The original data model and data source files are in in the oldPython\resources folder.

The rest of the operations can be performed within the cap folder and there are scripts in the package.json file major operations.

You can use npm run build to perform the cds build and should be ran before deployment to HANA or whenever you make changes to the data model.

You can run npm run hana to deploy the content to your HANA database. Just be sure from the terminal that you are logged into the cf/xs cli and targeting the Account/Org/Space where you want the content to live. By default this command will create an HDI Container instance named starwars.

You can run the command npm run load. This command will read the original JSON data files from the source project and load them into your HANA database using Cloud Application Programming Model CQL. The loading script is convertData.js

The command npm start or cds run will start the service running locally. It will open the standard CAP test page where you expolore the OData Services or the Fiori UI.

From the Cloud Application Programming Model preview (which opens locally when using npm start or cds run), you can access the Swagger UI test tool (with entity diagrams), test the OData services or metadata calls directly in the browser, or access the Fiori preview UI for each of the main entities. 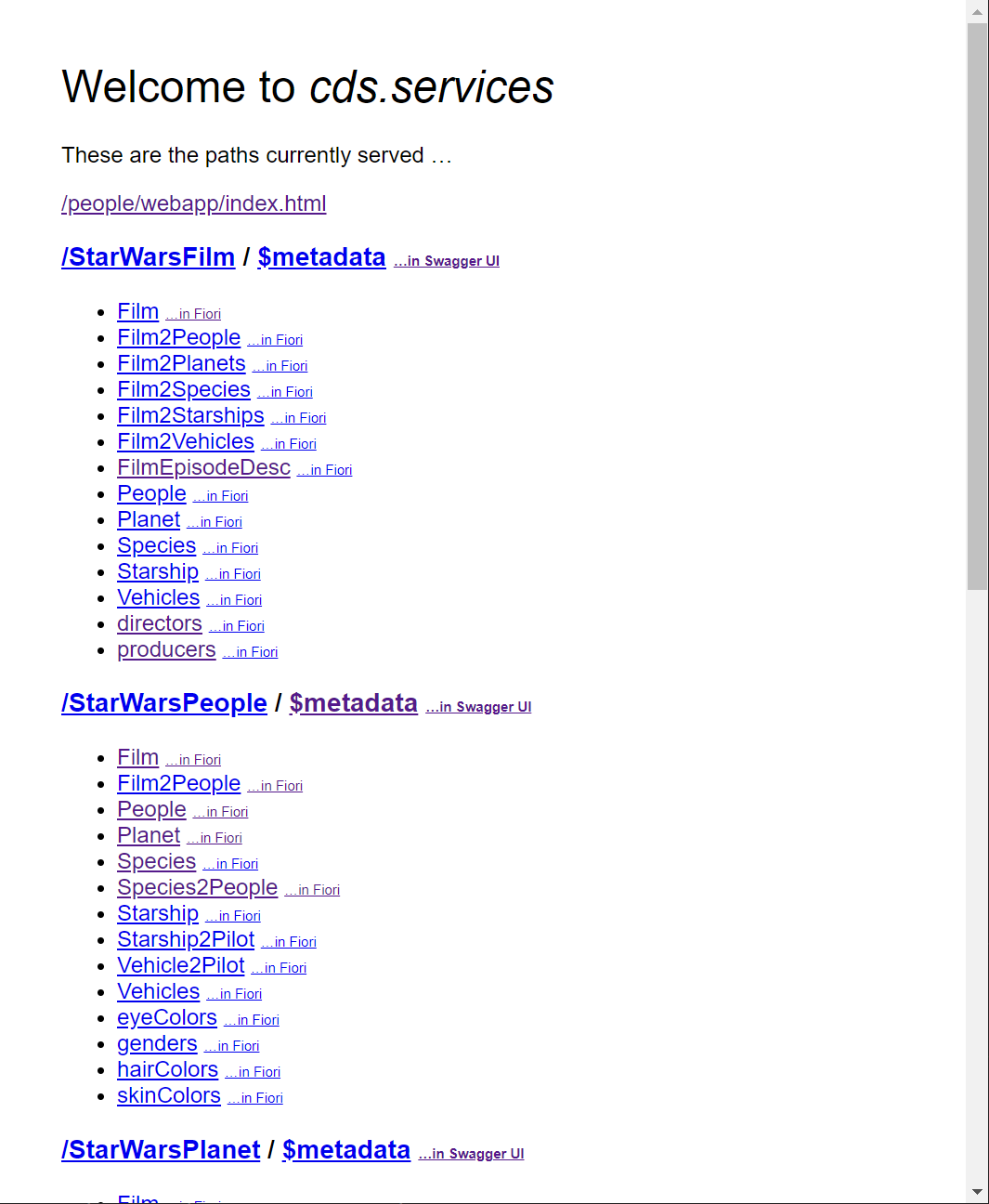 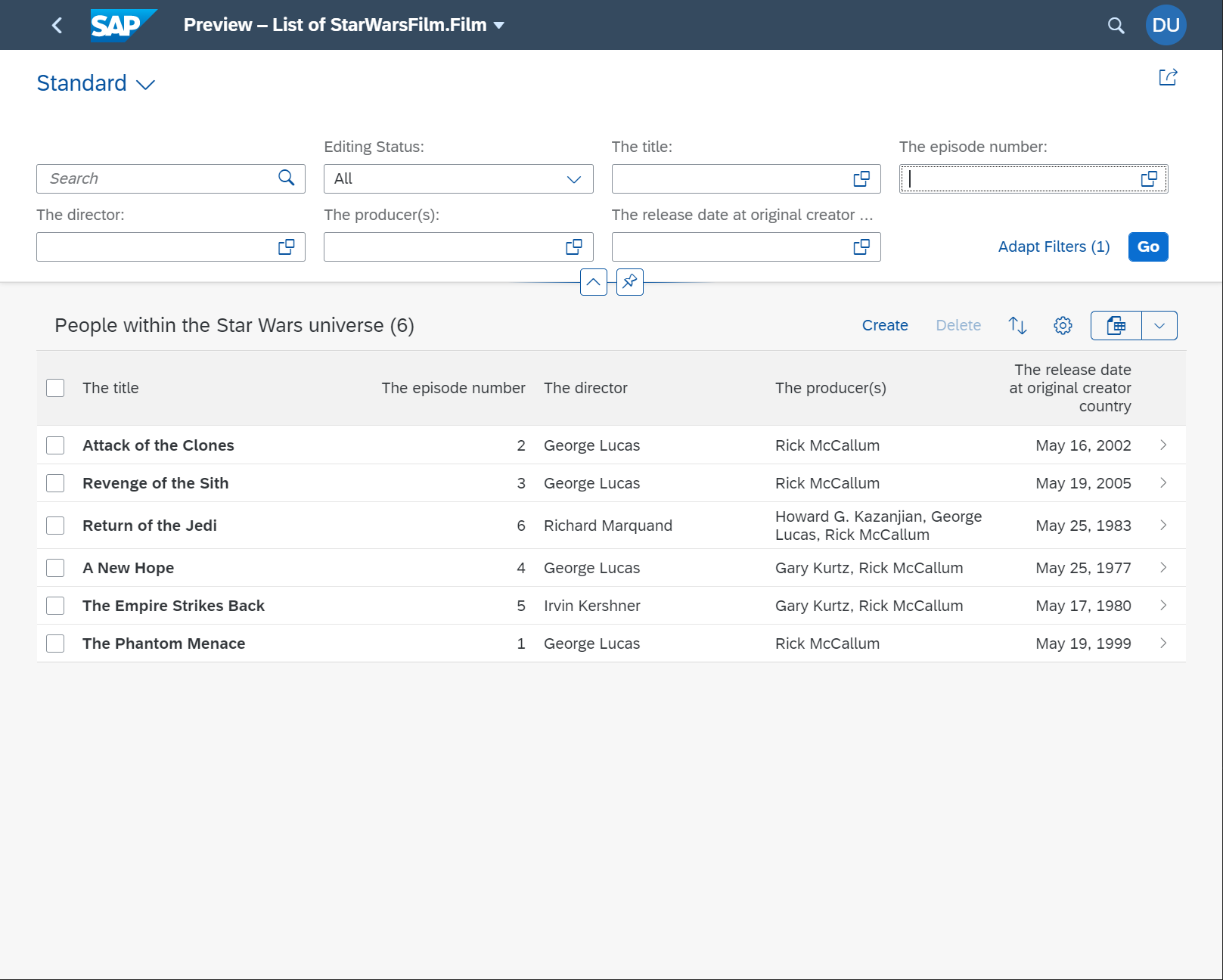 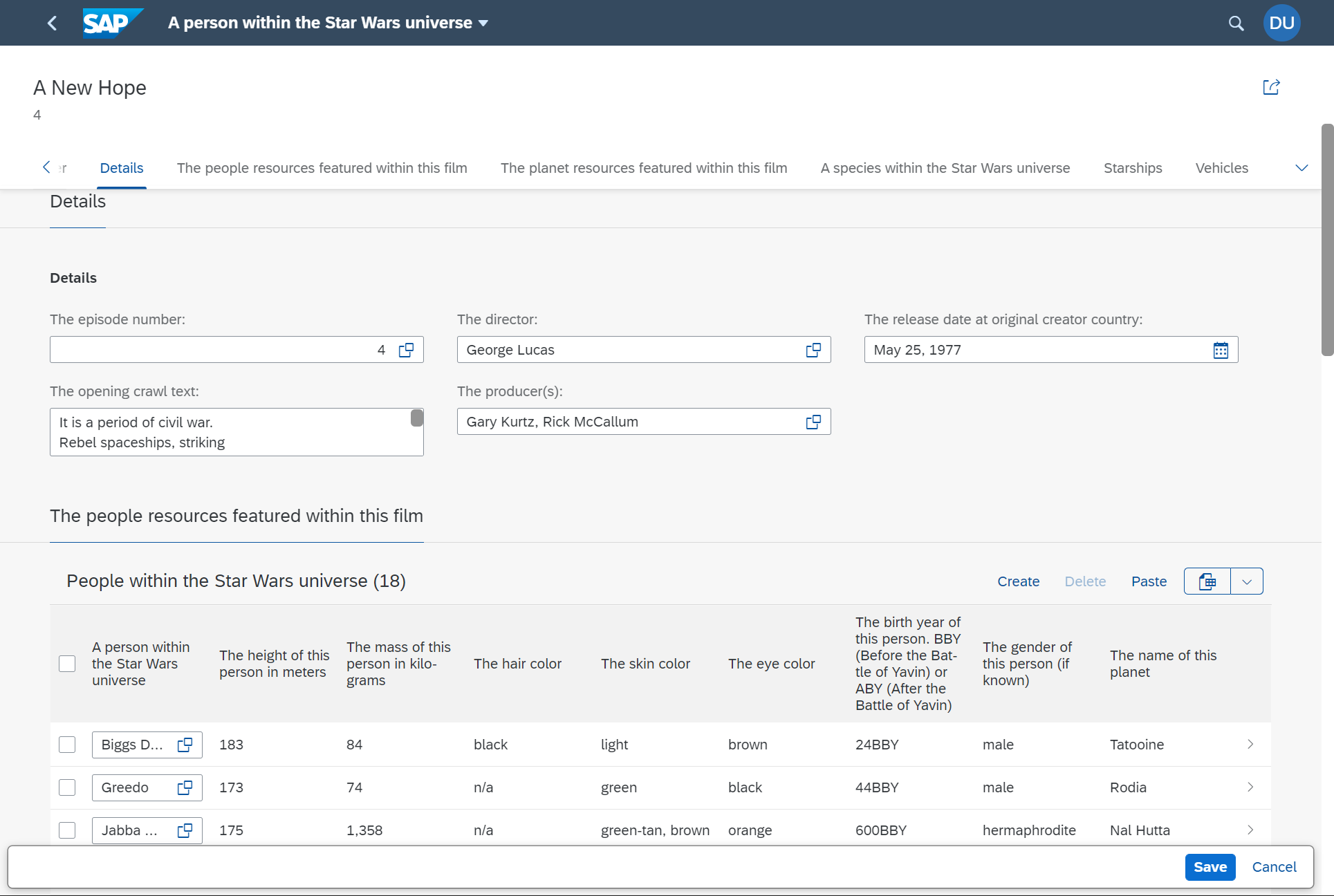 Star Wars and all associated names are copyright Lucasfilm ltd. All data in this sample has been freely collected from Wookiepedia under CC-BY-SA.

This holiday season will make me busy to try this out.  Happy Christmas to you and your family.  Happy Vacation and stay safe!

Do you have some example with edit + send file to service?

send file to service? Not sure what you mean by that.

Hi Thomas its an honor to talk with you.

I was asking for the scenario when you need to edit data and send a file (an image of the film for example) to your odata service. Does odata support this kind of services?

Im reasearchin about CAP. It seems an easy way to expose entities as an odata service.

Thanks again for your job.

No media processing in this sample, but another one does have some:
https://github.com/SAP-samples/hana-opensap-cloud-2020/blob/main/db/schema/masterData.cds#L402

This is much better than the normal bookshop sample.  Thanks for sharing. Happy holidays Thomas Jung !

Very funny and interesting!! Thanks for sharing!

Thomas ,How do You create so many entities in the cap model or what is the methodology ?

Actually in this case I was converting an existing data model defined in JSON schema from the original project.  I was lazy and wrote a script to convert the base model and i18n entries over from that.  For all the additional annotations, compositions and annotations I didn’t really use a methodology.  I just typed it all in by hand.

I am trying this out in BAS in the trial account and was successfully able to clone it under my projects .  But now I ran into an issue when I run "npm run build" command. I am running it within the cap folder. This is the error. Am I missing a step? 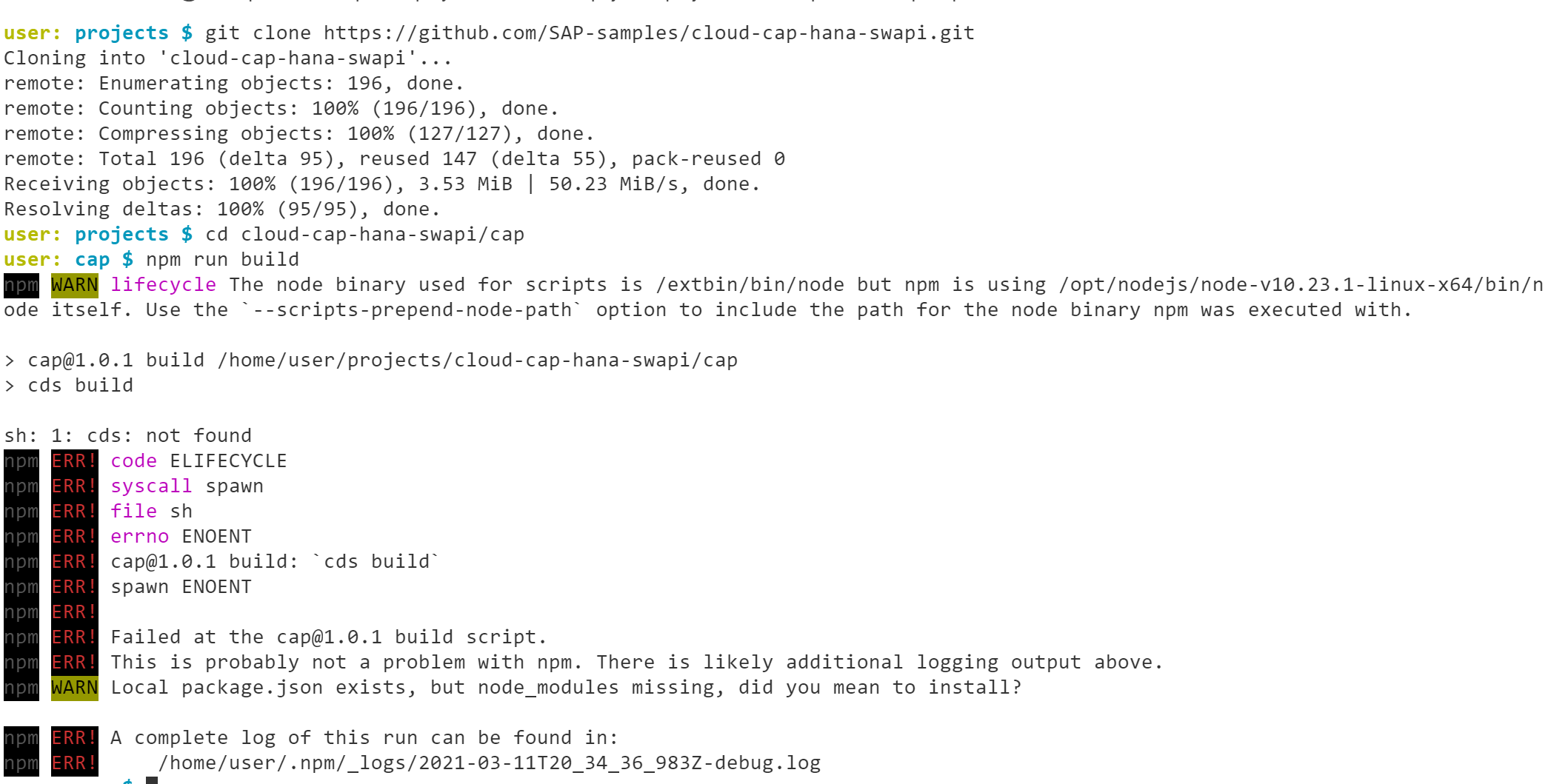 Looks like you've not done an npm install. You need to do so to install the dependent packages before you can run the project.

Do you know if it is possible in CAP(Fiori Elements) to display the people(collection) as a UI Line Item right in the list Report page already?

Do you mean from the UI where the Films is the lead entity?  You can expand and add attributes from any child entity of the main entity IF the association cardinality is 1:1.  But in this case there are many people for each Film entity therefore you couldn't logically expand that on the UI Line Item of the List Report. But you could use People the primary entity of a UI and then it would be in the List Report.

way more to see than in the bookshop example.

Im stuck at the point where i try to fill the db with data with npm run load.

EDIT: i solved the issue "The node binary is used for ...etc" with the command "npm config set scripts-prepend-node-path auto"

Have you performed a cds build first?  The error seems to indicate that you are missing the csn.json that would be created by the cds build. You'd want to build and probably deploy to HANA before you try and load data.  Have those two steps been sucessful?

I think so. Isnt npm run building them ?

That are the commands i used:

Thats where it went wrong. I had no data loaded. and the shown issue in my previous post.

Just tested in both VSCode and BAS and it worked for me. I noticed you were getting a blank folder in path and thought that might be an issue on Linux (but not Windows where I had primarily test). I corrected that blank folder, but tested both ways in the Business Application and it worked fine. 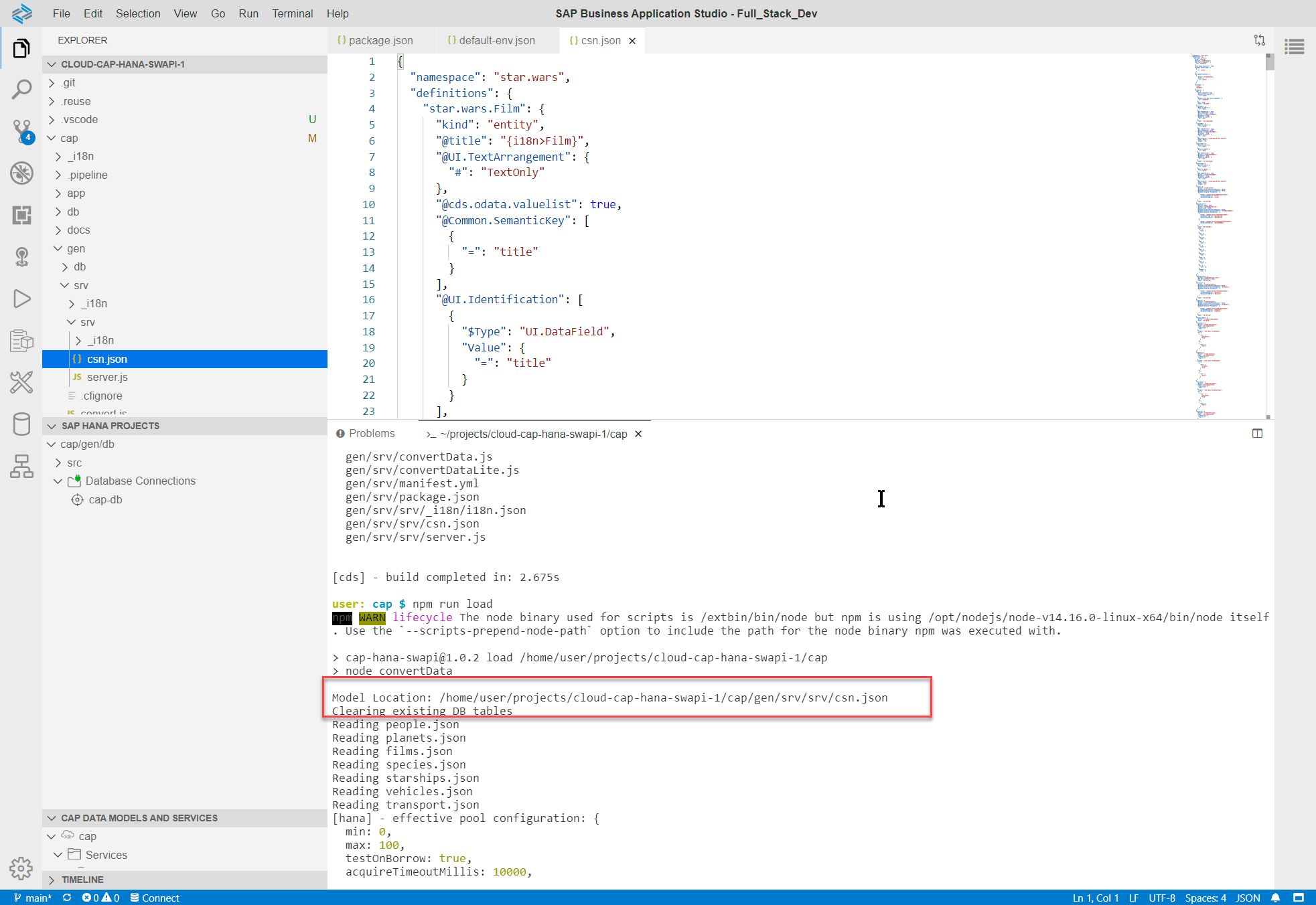 Check in the Explorer to make sure in that path of /cap/gen/srv/srv/ you have a csn.json file.  When I do a cds build that's where the model output is going in both VSCode and BAS.

Thank you so much. It works now. I still dont know why but finaly I can experiment with the swapi app.

Im doing your hana hands on tutorials and a few tuts on developer.sap. learned alot from you and the Team. Marius Obert has helped me alot too. Thanks for your effort <3

I run the Project in Visual-Studio-Code on Windows10 locally.

Actually i run in the error: VError: Found 0 matching services.

where am i going wrong?

Hi,
it works now, i have deployed to cf.

Isn´t it possible to run the project local?

Yes you can run the project locally.  When you deploy to HANA a default-env.json file will be created with the credentials. This can also be copied to the root of the project to tell the cds run how to connect to HANA for testing.  Or you can use the hana-cli developer tool to create the default-env.json as well. The default-env.json simulates the environment and the service bindings you would have when you fully deploy to Cloud Foundry and allows you to test locally but still connect to the backing services such as your HANA DB. 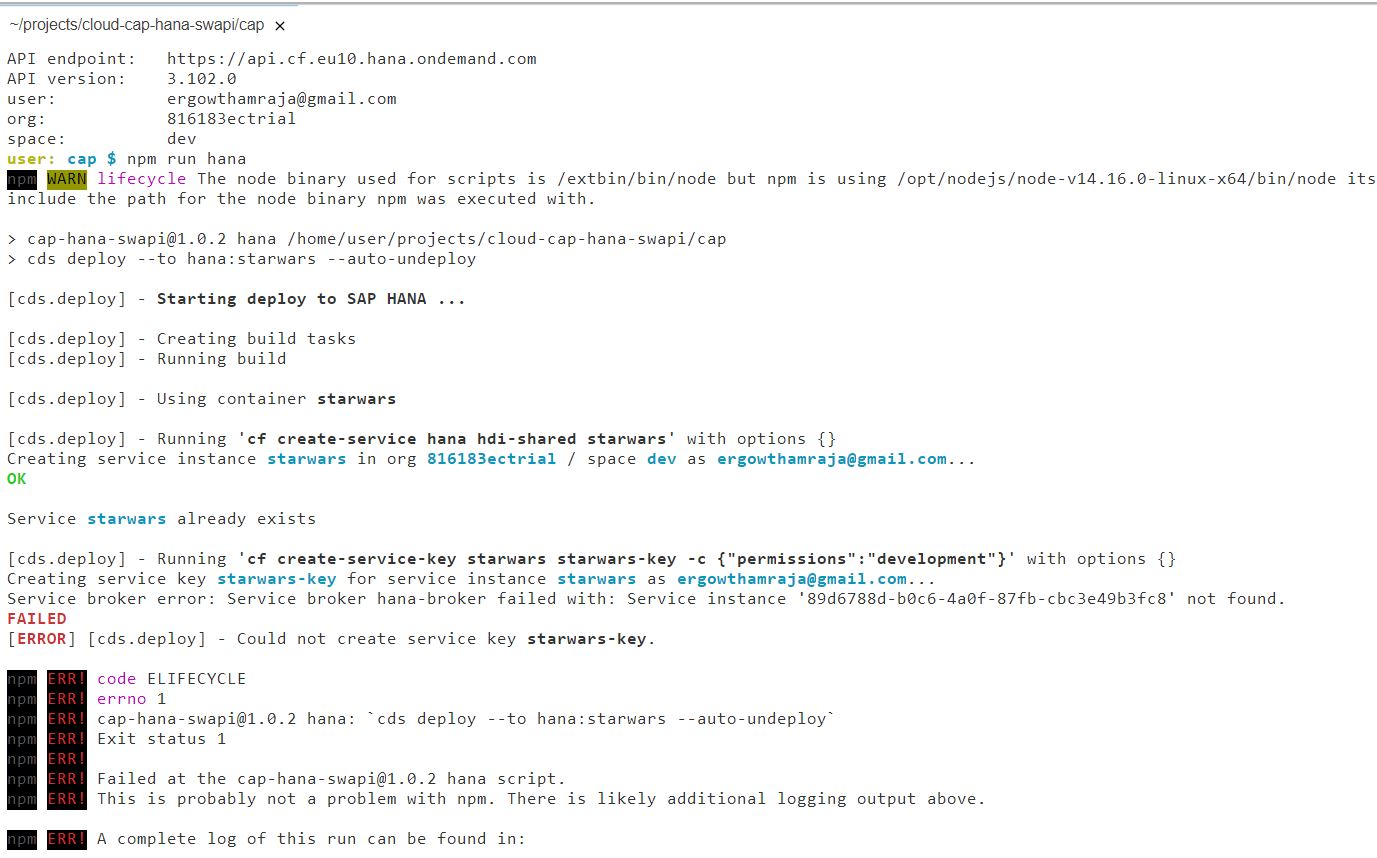 Interesting. I've never seen this error before.  You don't get an error on the service instance itself but it seems to be that it already existed. It's only when it creates the key that you get an error.  First is your HANA instance running?  If you are using HANA Cloud Trial, remember that the instance stops every night (to save money) and has to manually be started each day

Yes i am using hana cloud trial. I have started the instance and its up and running

I'm afraid I can't recreate this issue. I'm using the same project and also on a trial account. It works fine 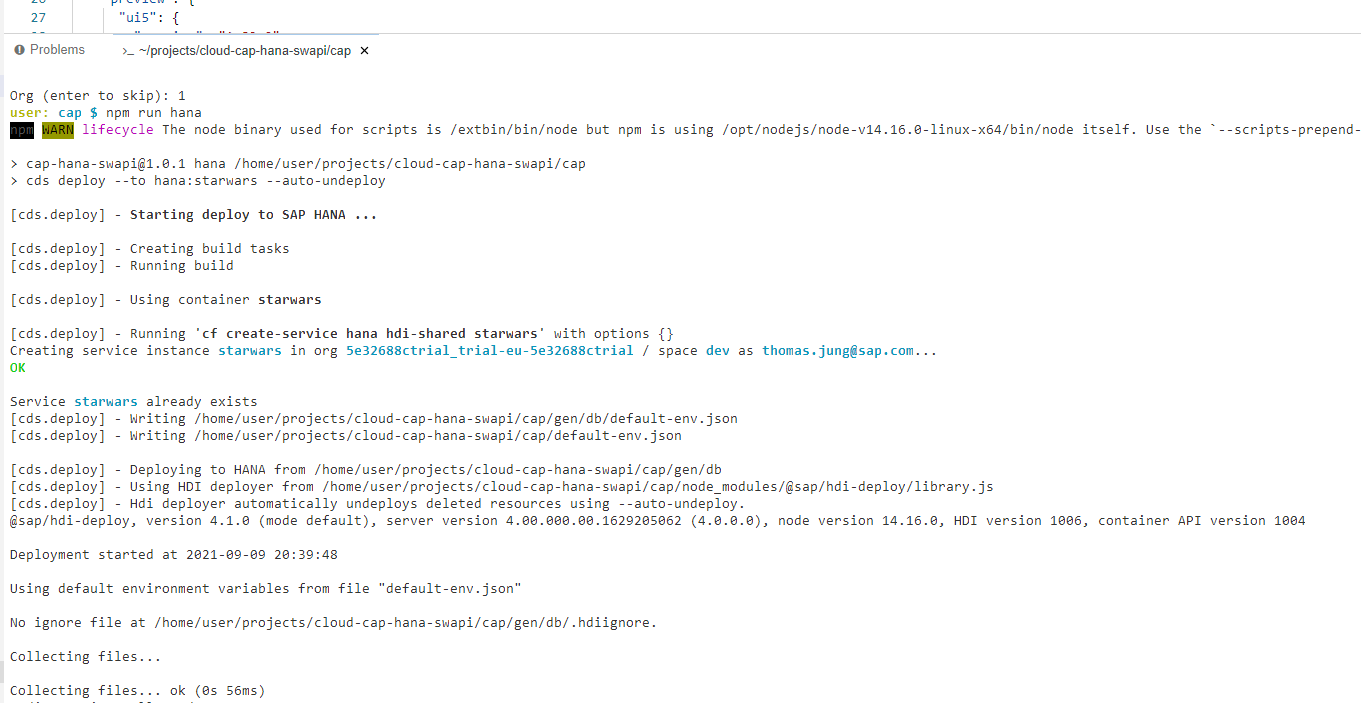 So there doesn't appear to be any issue with this specific sample nor a general infrastructure issue. It would seem to be contained to your account. If you perform a cf services - how many HANA HDI instances do see?  Do you have a lot of other instances created in this account already?  And what i fyou try and create the service-key yourself.  Do you get the same error when creating from the command line manually?

i have deleted the application and try adding the project again. Now when i run "npm run hana" it is giving the error as attached That error is pretty straight forward that there is no connection possible to your HANA Database.  This generally either means that the HANA DB isn't running (see earlier comment about the trial database stopping every day) or that your allow list on the trial instance is restricted and rejecting the connection.