In this blog post, we will use a clustering algorithm provided by SAP HANA Predictive Analysis Library(PAL) and wrapped up in the Python machine learning client for SAP HANA(hana_ml) for outlier detection. The algorithm is called density-based spatial clustering of applications with noise, or DBSCAN for short. Basically, you will learn:

Outliers are often associated with their frequency of occurrence in a dataset: inliers are points with high occurrence, or they are in close resemblance with many other points; in contrast, outliers are those points with low occurrence and do not look like any other point at all. Then, if all points from the dataset of interest are scattered plotted for visualization, we will see that inliers are locally aggregated into groups/clusters, while outliers stay isolated, away from those clusters of inliers. This kind of outliers are often not associated with extreme values, illustrated as follows: 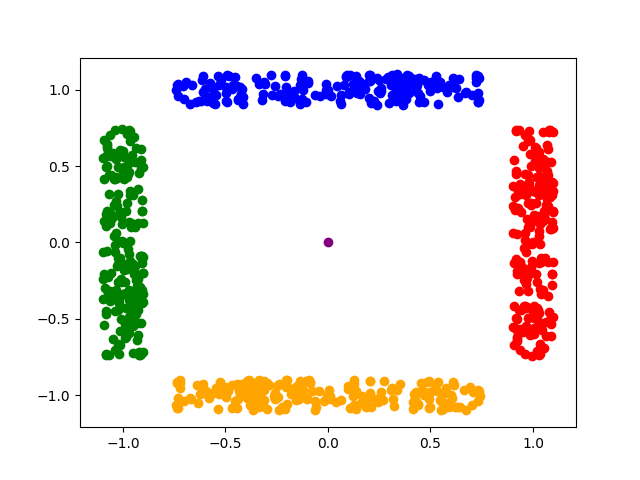 In the above figure, the centered purple point are isolated from other groups of points and appears to be an outlier. However, both coordinate values of it are not extreme values, so it cannot be detected by typical statistical tests like variance test and IQR test.

In this blog post, we deal with the problem for detecting the aforementioned type of outliers using DBSCAN. DBSCAN is the density-based clustering algorithm, its main objective is to find density related clusters in datasets of interest, while outlier detection is only a side product.

DBSCAN is essentially a clustering algorithm. It firstly divides points in dataset into different groups by checking their local aggregation with other points. The local aggregation could be described by density and connectivity, controlled by two parameters minPts and radius 𝜖 respectively. Locally aggregated points expand to clusters via reachability, while isolated points that fail the local aggregation criterion are labeled as outliers. This is roughly the working mechanism of DBSCAN for outlier detection.

For better illustration, in the following context we use DBSCAN to detect outliers in two datasets: one is a mocking dataset that has been depicted in the introduction section, another is the renowned iris dataset.

All source code in examples of the following context will use Python machine learning client for SAP HANA Predictive Analsysi Library(PAL).

Use Case I : Outlier Detection with Mocking Data

The mocking data is stored in database in a table with name ‘PAL_MOCKING_DBSCAN_DATA_TBL’, we can use the table() function of ConnectionContext to create a corresponding hana_ml.DataFrame object for it.

The collect() function of hana_ml.DataFrame can help to fetch data from database to the python client, illustrated as follows: 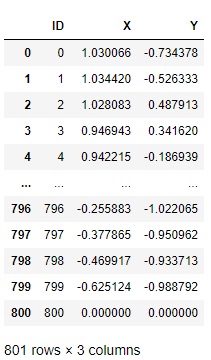 The record with ID 800 corresponds to the purple point in the graph as shown in the introduction section.

Next we import the DBSCAN algorithm from hana_ml, and apply it to the mocking dataset.

In the result table of DBSCAN, most records are assigned with their corresponding non-negative cluster IDs, while detected outliers are commonly assigned with cluster ID -1. Direct view of the result confirms that the centered outlier has been successfully detected as our expectation. We can refer to the ‘CLUSTER_ID’ column of the clustering result table to check whether other points have been detected as outliers, which is illustrated as follows:

So the centered point is the single detected outlier, which is consistent with our visual perception of the data . 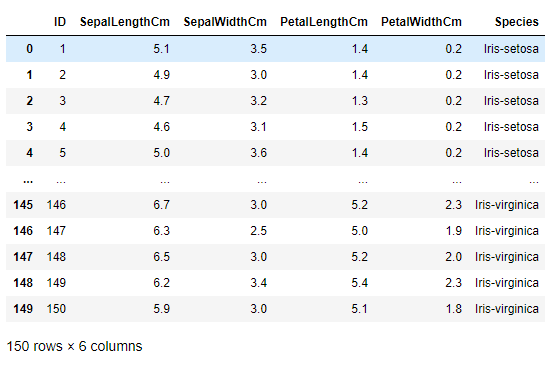 Now we apply DBSCAN algorithm to the iris dataset for outlier detection, illustrated as follows:

As shown by the clustering result, the algorithm separates the inliers of the iris dataset into 2 clusters, labeled with 0 and 1 respectively. Outliers are also detected, illustrated as follows: 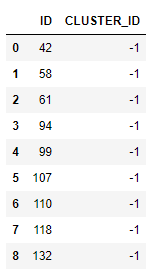 In the following context we try to visualize the clustering result, so as to making sure that outliers are appropriately detected.

We first partition the clustering result based on assigned cluster IDs. 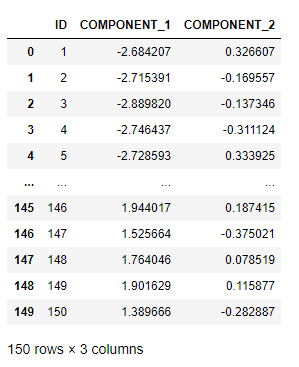 Now we can visualize the outlier detection result on the dimensionality reduced dataset. 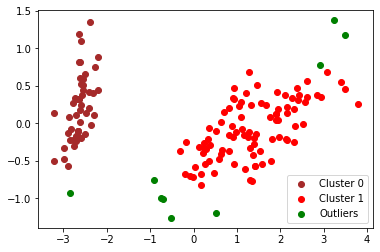 Detected outliers are marked by green dots in the above figure. We see that most marked outliers are isolated other regularly clustered points in the transformed space, so the detection result makes sense in general.

In this blog post, we have shown a straight-forward way to apply DBSCAN for outlier detection in datasets. Under the working mechanism of DBSCAN, a point is considered inlier/outlier depends on whether it is locally aggregated with its neighbors or is isolated, which is not directly related to extreme values in any numerical feature; besides, when DBSCAN is applied, all feature values could get involved if appropriate distance metrics are adopted. These are the key differences between outlier detection using statistical test methods and DBSCAN.