My blog post is not really a review of Teched day 1 or 2 or whatever this day is.   (I just know I’m getting very little sleep)  My post is about what I think about the virtual format.

It had me worried.  I’ll admit it.  When they first told us what we were doing for community sessions.  what was going to happen with regular sessions, and how to ask questions, I didn’t know what to think.  So I stayed positive.  Thought happy thoughts and posted here about how excited I was.  Because, you know, it’s TECHED.  I love Teched.

More questions were asked.  Every session that allowed questions got them.  I noticed more people than ever before where asking questions.   The ability to upvote a question was perfect.  Why?  Because a lot of people where thinking of the same questions I did.

Questions.  More were asked but some were not.   Strange.   But really kind of normal.  In person they were never all answered.  A lot of people were left out who had a question, but the session ran out of time.

So if you have any questions for me at all – well I blog a lot.   You can also direct message me.

Any other questions that didn’t get answered?  I have no idea what is going to happen.  Perhaps there will be some follow up.  But maybe not.  If it was your question or one you upvoted, that could be a frustrating part of the virtual event.  But there was a lot more going on.

Well go take a look at the sessions.  And there are so many that haven’t even aired yet.  The content was what I would expect from a Teched.  Perhaps even better.  Better?  Yes, better because there was more of it.  And I’m getting to go to a lot more sessions than I normally would.

Yes, I was one of the lucky ones who signed up for a hands-on session and got in.  That was a problem.   There were so many people.  I have no idea how it could have been made any better.

Anyway my hands-on sessions was hands down (pun intended) the best one I’ve ever been to.   I was home.  I could relax and enjoy.  I had control of the computer without anyone watching every keystroke.  In my hands-on the presenters were brilliant.  Normally prior to your development, the presenter will quickly run through the demo.  Quickly – I’m guessing they would have had a bit of practice.  My presenters had a “volunteer”.  He had a question and they asked to display his screen.  The volunteer went through the exercises.  He was doing the demo piece.  His pace was a normal pace.  I was able to keep up with him.  He asked questions that I would have.   Wow!  Just wow.   That was so cool.

Avoided.  I have to love that.  I did miss some of the networking that we did outside of the sessions.  But it was a trade off.  Not having to leave a session early to get to a different one was a nice change.

Needed a filler in between?   There is always Channel 1.  I hung out there in between sessions.

Limited people from work who were allowed to go!!!!

No limits.  It was free.  It was on-line.  Some people might have only been able to catch a few sessions in between meetings.  But that was better than before.  You know when you have a 20 people team and only 1 or 2 could go.

By the way, my dogs who normally only get to listen to me practice actually got to see Teched this year.   They were not impressed.  Sometimes taking a snooze, sometimes leaving the room.  But that’s what they did when I practiced my speeches.

Interaction with other people.  Although there were some great discussions on Discord.   I have to say that was my biggest issue.

Some questions didn’t seem to get answered.

Limited hands-on.  Although I’m not sure how it could be better.

And I must say, I told my husband today that I was missing cookies, snacks, great lunches, and dinners.   I suggested he create them for me.  He just laughed.

Questions are answered and saved if they are not.  The plan is to answer them, but if your question doesn’t get answered ask here.   Hands-on or workshops will be offered here in the SAP Community.   Sign up is again limited and don’t ask me where.  I just heard it at Teched!

So overall it’s been amazing.  It’s an A in my book.  It’s a success, and it’s not finished yet.

BTW – you really want to sign up.  At the very least you’ll get the limited learning hub.

My blogs are usually missing pictures.  So here one is courtesy of Jerry Janda .  It’s on Tammy Powlas session on Free tools to support move to SAP S/4 HANA.  If you are getting ready to make the move – I really recommend the session. 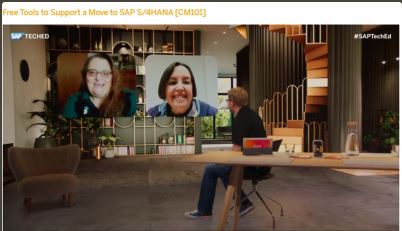 How are you finding Teched?   Are you enjoying it?  Hating it?  Is it a flop or a success for you?