Enter your java project workspace in terminal, and run below command to create initial java project

After run success, the initial project will be generated in your folder. Regarding the case, the folder named products-service 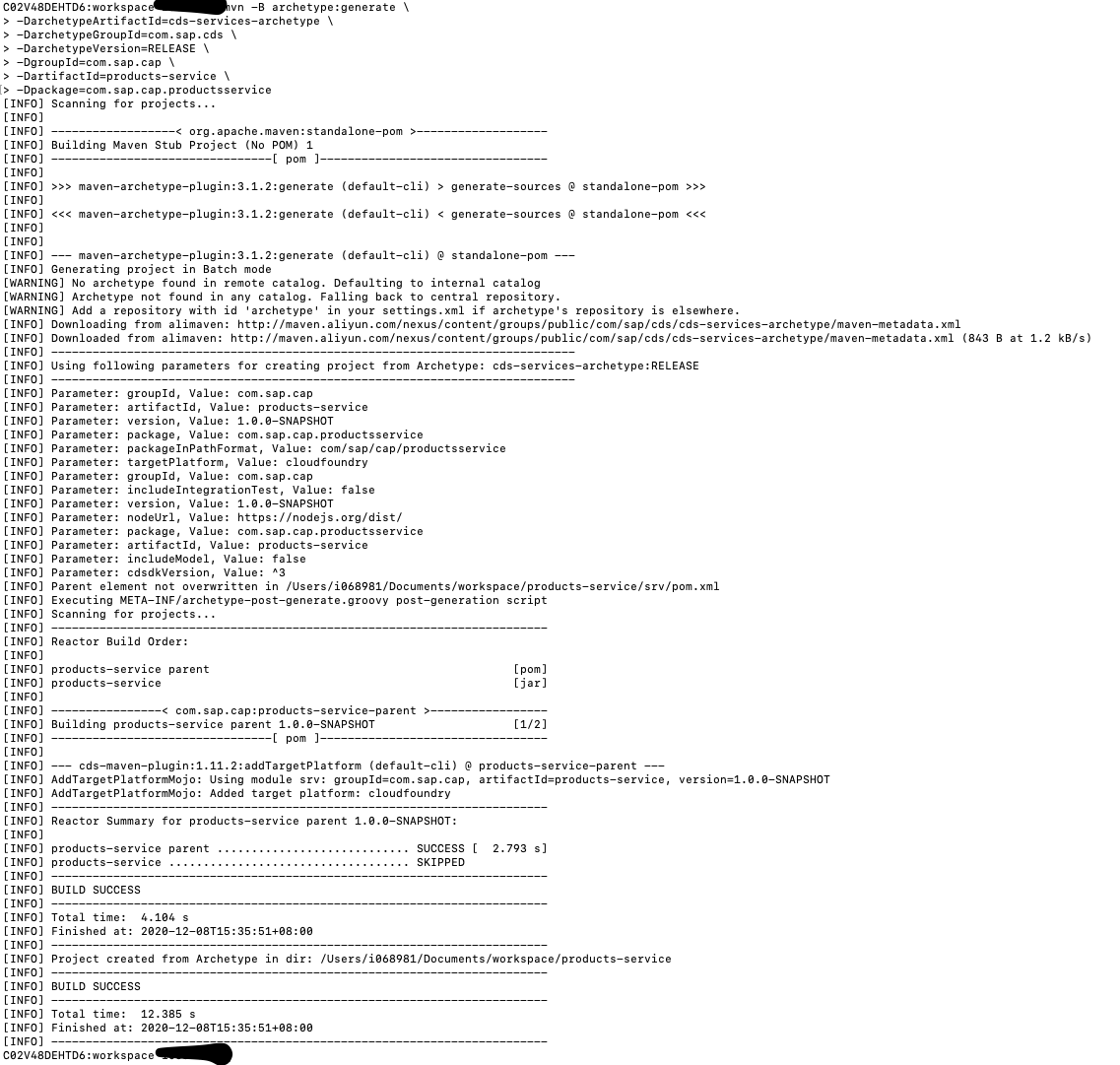 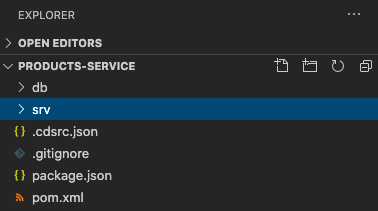 In VSCode, open a terminal window and run below command to compile project

After running this command, some files are generated and added to the srv/src/main/resources/edmx folder. This is the default path, where CAP Java runtime looks for the model definitions.

The created project is based on spring boot, then you could run the application with below command in terminal.

After run success, the application will be started at default port 8080

This class now handles the READ and CREATE events that target the Products entity of the AdminService.

CDS Query Notation (CQN) is the common language in CAP to run queries against services. It can be used to talk to the services defined by your model, but also remote services, such as the database.

The event handler uses the following APIs, which are available for service providers in CAP Java:

Before running the command, make sure the application already stopped, otherwise there is an error of port 8080 was used

open a new terminal to run curl like below

We also could start the application with vscode

Change the project as a Reusable Service

Previously, we defined a service which contains a cds entity. Normally when modeling with CDS the best practice is to separate services from the domain model

Therefore, we will define the complete domain model in the db folder

The localized keyword can be used to mark elements, which require translation. The ability to store translations for different languages and to store a default fallback translation is automatically handled by CDS for you. You will see this in action in more detail in the next tutorial.

While associations define a rather loose coupling between the entities, compositions define a containment relationship. Compositions can also be thought of as defining deep structures. You can perform deep inserts and upserts along these structures.

The cuid and managed Aspects

Both cuid and managed are aspects. Aspects extend an entity with additional elements. The cuid aspect adds a key element ID of type UUID to the entity.

The CodeList Aspect and the Currency Type

CodeLists can be used to store global, translatable definitions based on codes, such as currencies, countries, or languages. Especially for UIs, a CodeList can be useful to provide a value help for certain input fields.

The Currency definition is a type. It defines an association to a Currencies entity. The Currencies entity is based on ISO 4217 and uses three-letter alpha codes as keys such as EUR or USD and provides the possibility to store the corresponding currency symbol such as € or $.

Previously we defined a simple service, called AdminService, which directly defined the entity Products. As you now have defined the Products entity in your domain model, the AdminService just needs to expose it. In addition, you defined the Categories entity, which should also be part of your service.

First, install SQLite to project, in VSCode open a terminal to run below command

To initialize the database with the defined domain model, execute the following command in the terminal

After run successfully, there is a sqlite.db file generated in your project folder

Step5: Connect to sqlite within VSCode 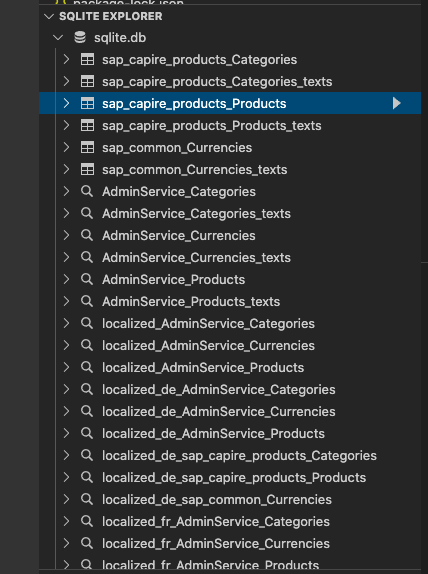 At the end of the file, add below content, replace /Users/{youruser}/Documents/workspace to your actual folder path

The CAP Java SDK has a Persistence Service that provides out-of-the-box capabilities to store and retrieve entities from a database. Therefore, no custom coding is required for this. The entities defined in your AdminService will be automatically served via OData and you can just delete the AdminService.java file that was created earlier.

Delete the AdminService.java file in the handlers folder.

Step 7: Run and test your application

Run with memory database with below command

Run with SQLite database with below command

In terminal, run below curl to insert categories

Check inserted data via browser with the URL: 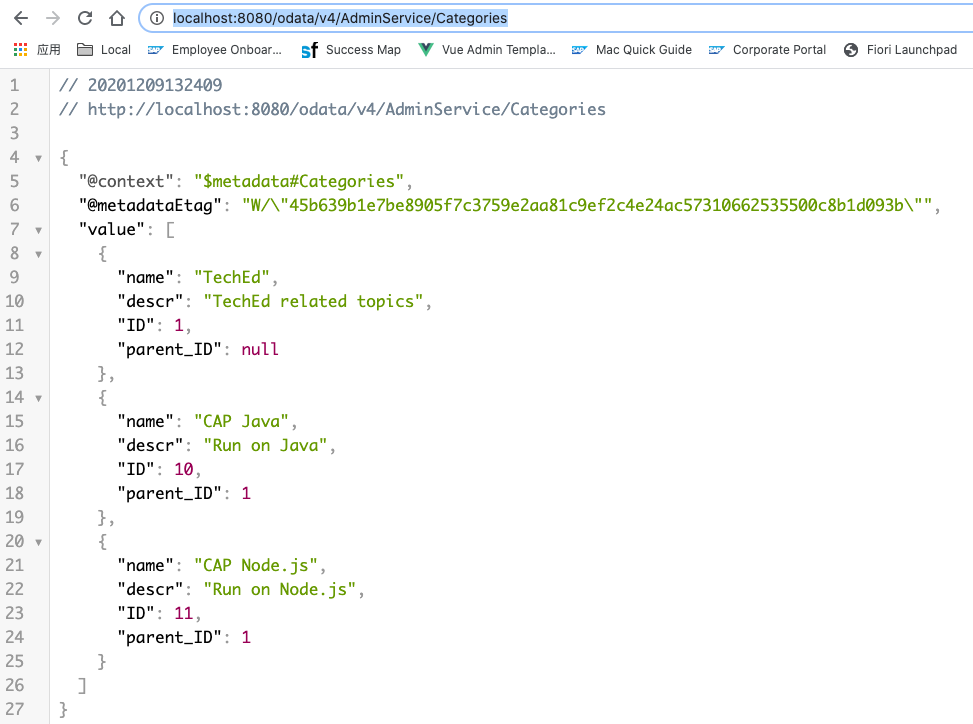 Step 7: Set up for reuse

The reuse of models can be achieved by publishing NPM modules with the models and defining dependencies to these NPM modules in other applications. There are a two steps we need to perform to prepare the products-service application for reuse. 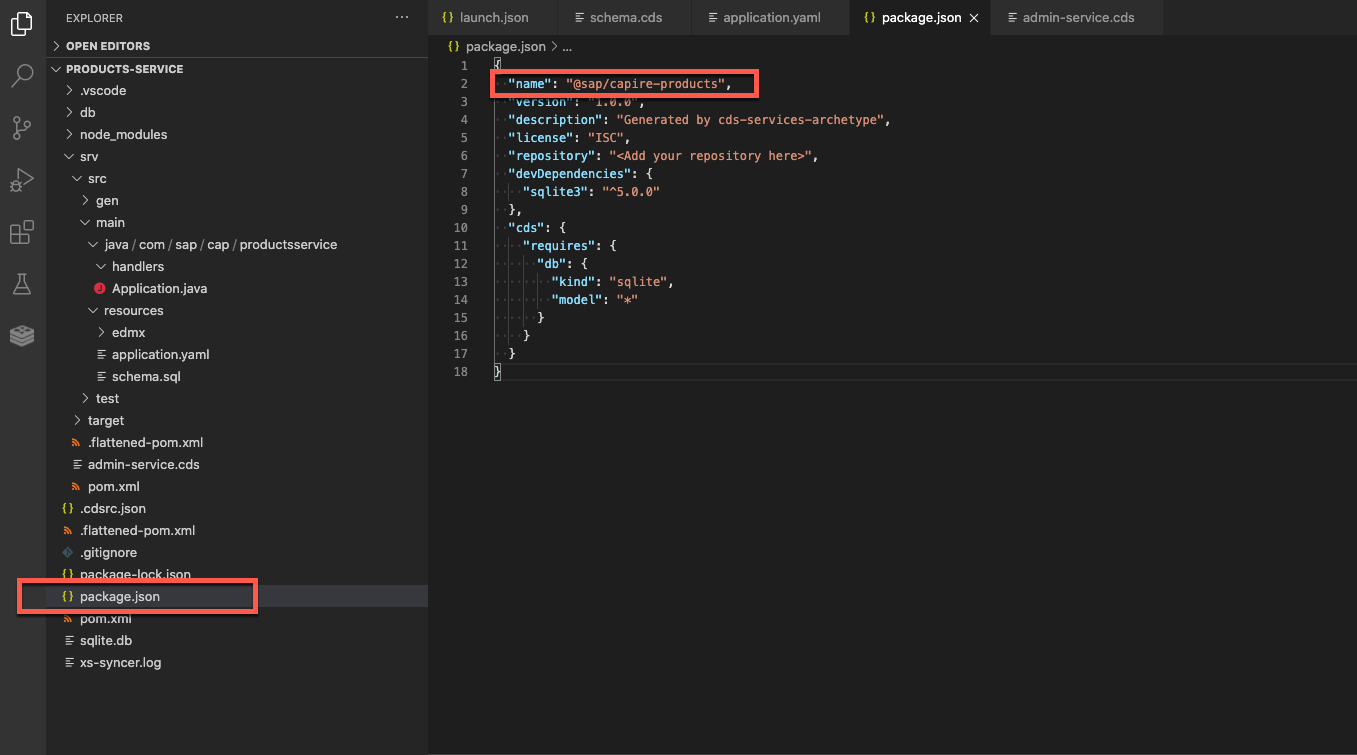 Thanks a lot. Bruce. It helps a lot.

Thanks for nice blog.

Just in case you run into this error:

The solution is documented here:

This worked for me: