SAP HANA Scaling in a Nutshell

When we talk about the scaling of the HANA system it is all related to hardware resources. We have different scenarios in which we need to consider scaling. Scaling can be divided into two categories.

Let’s assume we have running HANA DB server and now there is a requirement to increase the resources of current hardware this is called a scaleup scenario. In this scenario, If the hardware capability can be checked from vendors.

In this case, we have to increase the resources by adding up one or more hosts. This setup can be achieved from the installation phase and later as well. In Scale-out we have multiple requirements, but I will mention two most commonly used which are Worker node and stand by the node.

In scale-out scenario, installation path should be accessible to all the systems which is Hana/shared by default. Because it is one database with multiple nodes. usr/sap will be separate for all the nodes.

I've one doubt regarding the attached diagram from SAP admin guide (page 26).

To ensure system availability, an instance of the system database runs on all hosts (worker and standby) in a single master and multiple workers configuration.

I'm confused with difference of master, worker and standby as per the picture. The master Name Server is running and other two replica should be standby or worker ?. If its worker node then it should be handling the requests, but system DB should be running on one host where scale-out is not possible.

how is it represented as worker name server ?. 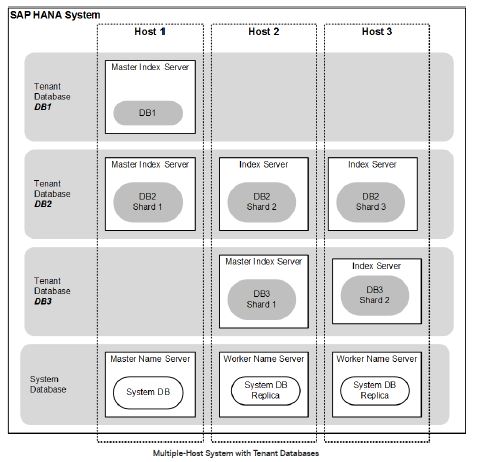