In June 2020, we released SAP Fiori tools. Our vision for SAP Fiori tools was to provide a way to streamline development of SAP Fiori apps, from idea to implementation. The starting point for the initial version was generating an app in one of the standard SAP Fiori elements page types. To extend the process upstream, into the design phase, we ran a Customer Engagement Initiative to solicit ideas from customers and partners about how they integrate user feedback into their design and development processes. This CEI ran from July to December 2020.

The purpose of the CEI was to obtain a deeper understanding of how our customers design and develop focused on the feedback loop between IT and the business at various stages of development and deployment. We were especially interested in the people, processes, tools, and technologies our customers use for gathering feedback. To collect this information, we spoke with participants from 15 companies across Europe, North America, and Australia, in a variety of industries, both customers and partners. Some participants were developers, some were designers, and some were business analysts. Due to Covid-related travel restrictions, all sessions were virtual.

We had several meetings during the CEI program

Customers and partners use many different approaches

The participants used a wide variety of tools for prototyping, ranging from “old school” to modern. Some of the tools were new to our team and we were familiar with others. Examples included: Balsamiq, Mural, Miro. SAP Build. SAP Fiori elements (low fidelity with basic floorplan), Jira, Version One, PowerPoint, Word, Excel, wireframes, user stories, email, and paper.

For creating the specification for the app, we also saw a range of different approaches. People collected their requirements as a list of backlog items, list of ideas from users (whiteboard or paper), Excel worksheet, service desk tickets, and even a list of update requests to an existing app.

People also used many different approaches for validating their early apps with users. These methods ranged from sending around documents or images for review, to live workshops where the development team showed a demo of the app and sought live feedback. In some cases, the IT team built a prototype app and sent a link for people to try the app. Some groups used SAP Build to create app mockups and captured feedback in that tool. 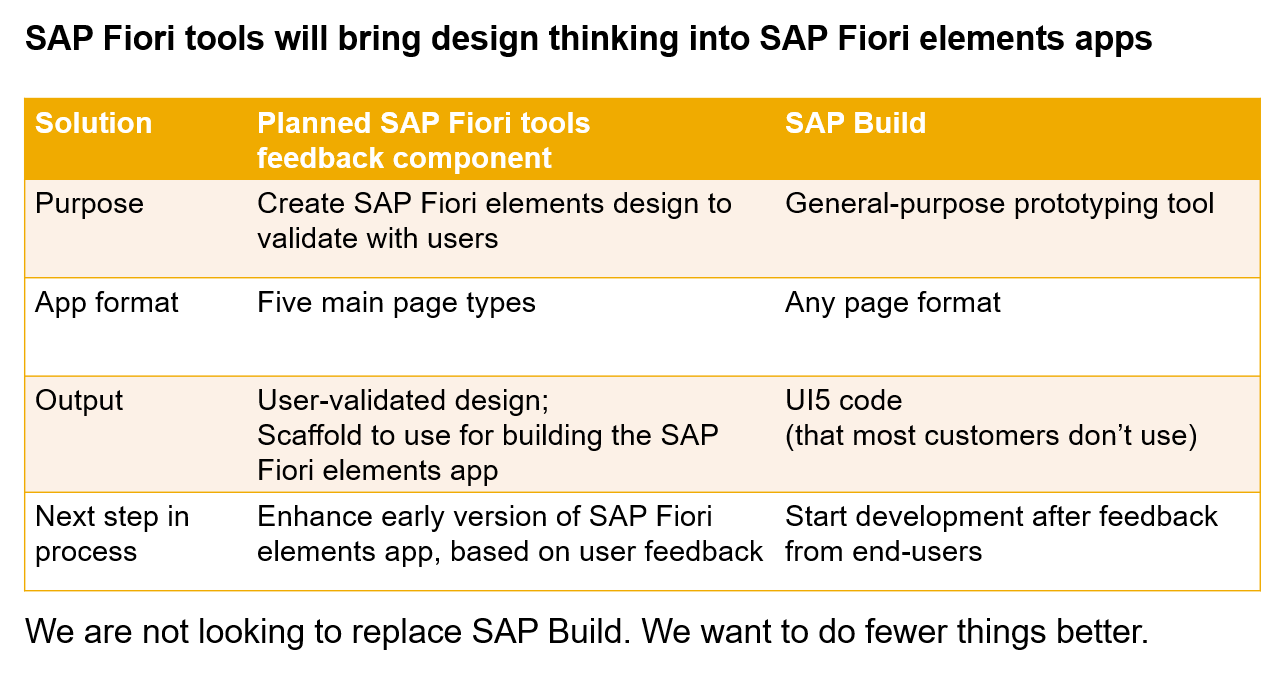 Some challenges of incorporating user feedback that the participants shared included:

Starting with the right data is critical for gathering good feedback

Since SAP Fiori elements relies on an OData service to power the application, we spent quite a bit of time learning how people currently use data for prototype apps, and what tools and approaches would simplify the overall development process. As with most of the discussions with our CEI participants, there was a wide range of methodologies that people used. Some created mock data and used that to build their app. Some created an OData service. Some used an existing OData service with some modifications. Others pushed the data issue to the business side and had them provide a sample dataset (usually in Excel) to use for the app.

What people wanted was a way to have the design patterns integrated into the prototyping tool so that anything in the prototype can be built into an app that is compliant with the SAP Fiori guidelines. As early as possible, they want to validate what is technically possible. If offered the choice between having a more polished app without data or something lower fidelity with data (even mock data), people chose the latter. They want an app that people can interact with and get a feel for the flow, navigation, and some data appearing to provide the proper context for the application.

We really appreciate all the great feedback we received during the CEI that validated our direction and provided some specific ideas for improvement.

We are planning our next steps

Based on what we heard, we plan* to add backlog items to our SAP Fiori tools development plans to create:

* This is the current state of planning and can be changed by SAP at any time without notice.

During the CEI, we showed early versions of these concepts and received several suggestions from the community that we will use to make improvements to our initial ideas.

If this was a normal year, we would show some sneak previews at SAP TechEd of what we shared with our CEI participants. Since there are no opportunities to do so, you can see our other sessions on SAP Fiori elements and SAP Fiori tools:

For a full list of all the user experience sessions at SAP TechEd 2020, please read this blog.

If this CEI topic interests you, please contact me and we can discuss how to incorporate your ideas in to what we are building.

The data-model centric approach for prototyping is something that is required regularly in our customer projects. For example, this week we had the choice between mocking a proposal with a PowerPoint template or using a prototypical CDS View with a Fiori Elements app. We went for the CDS approach, have a better understanding of how and where we will get our data, but at the cost of higher effort. Efficient tooling would thus be highly appreciated.

Thanks for the comment. Our goal is to make it faster and easier to get to the point where you can share the app with users to obtain their feedback.

I'm really looking forward to your next updates! And I'm sure many others do as well. Thanks for your effort.

Hi Peter - currently working at a large client using build.me - which has a few limitations - number of prototypes etc. - would love to assist if needed.

Has there been any news regarding these prototyping extensions in Fiori Tools? Updates, roadmaps...

We are continuing to work on this topic. As you know there are several extensions that comprise SAP Fiori tools, so we must spread our development resources across multiple projects in parallel. We do not have a specific release date for anything related to prototyping as part of SAP Fiori tools.