After a fair bit of work on the “first 100” questions, described in my last post blogs.sap.com/2020/11/06/first-sap-champion-answer-thon-results-and-plans/, we’ve started another week of question/answer rounds. What does this mean? We’re applying a little human intelligence to the wisdom of the crowds, as filtered through the google search results lens.

A small showing today, Monday being the day after a long weekend in the US (in case you hadn’t heard), we looked at 9 out of the second hundred questions. Some ABAP, some database, some others. I picked out one I had minor exposure to as a DBA, controlling growth of the EDI40 table. The upshot of the question was whether certain jobs could be run parallel, and how to make the process faster. It’s a bit of the tip of the iceberg, since data volume management is an entire discipline, if not a software product in the usual sense.

I had thought to answer with the shorthand, “here’s an SAP (or ‘OSS’) Note” [see which] but was persuaded by Jerry Janda to go full out with additional perspectives.

We followed other trains of thought on other posts as we reviewed them. A couple ended up with the software equivalent to “you should see a doctor for that condition.” We didn’t definitively finish with a few others, to let others review and perhaps a second reading give a better direction.

I will be commenting on a barcode question, which seems rather primitive and elementary yet continues to be discussed. Deployed? Possibly.

I ended the first day trying to make sense of a question about modifying the BSEG “table.” What is unclear is the “why?”, rather than the “what?”. The simple clarification I’d like to have is “what problem are you trying to solve” by modifying a data object. Seems there’d be a chain of authority and responsibility for changing a system, testing the change, communicating any impact, etc. 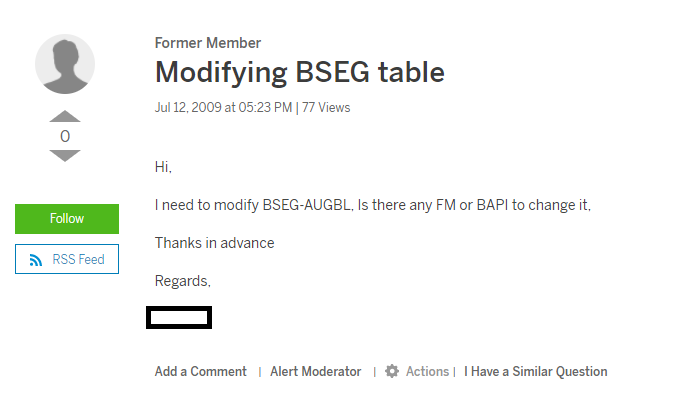 Yes, this is an old question, and yes, it’s vague. If google still sends people here, how can the context be improved? Better user experience? Yes, please.