Resources to give facts a fighting chance against misinformation

After the 7th Coffee Corner Meet-Up where I was happy to host the break-out room to share some information and resources of how to tackle misinformation related to climate change (and other topics) I collected some information in a response in the coffee corner thread. I think that identifying and tackling misinformation wherever it raises its ugly head is an extremely important skill for everybody to have. Otherwise, we’ll not stand much of a chance to make fact-based policy decisions and commendable initiatives like SAP’s Climate 21 will fall flat on their faces or will not have an effect quickly enough. This blog post therefore contains information about many resources which can help with giving facts a fighting chance against misinformation.

While I’ve not been actively involved with the creation of these resources, I’ve known the lead authors of several of them (Stephan Lewandowsky and John Cook) for many years, have worked on the German translations and am currently coordinating the overall translation efforts (in my spare time) for their handbooks. So, let’s get started with breaking the wave of misinformation! 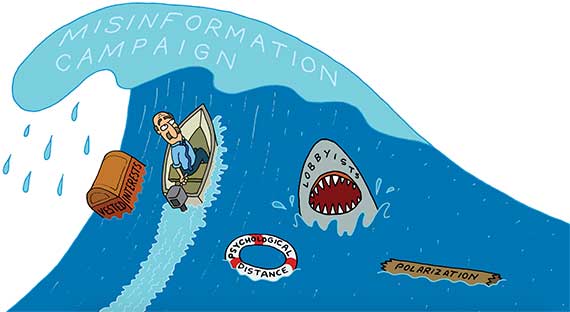 The handbook is a consensus document that was created by an innovative process that involved a series of predefined steps, all of which were followed and documented and are publicly available. The authors were invited based on their scientific status in the field, and they all agreed on all points made in the handbook. The authors therefore believe that the new Handbook reflects the scientific consensus about how to combat misinformation. 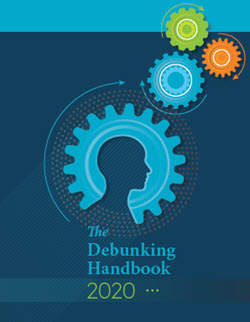 The Handbook distills the most important research findings and expert advice on dealing with conspiracy theories. It also introduces the abbreviation CONSPIR which serves as a mnemonic to more easily remember these seven traits of conspiratorial thinking: 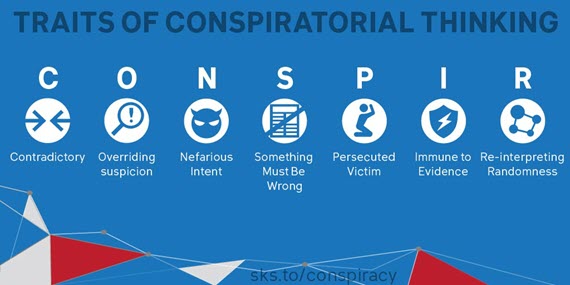 The Consensus Handbook provides a brief history of the scientific consensus on climate change. The authors John Cook, Sander van der Linden, Edward Maibach and Stephan Lewandowsky summarize the research quantifying the level of scientific agreement on human-caused global warming. They examine what the public thinks about the consensus and the misinformation campaigns that have sought to confuse people. They also look at how we should respond to this particular misinformation and how best to communicate the scientific consensus. Lastly, they answer some of the objections to communicating the consensus. Disinformation campaigns use the same five main techniques and tricks time and again ­– not only on climate change and COVID-19, but on many other science-related issues. Within five main categories (see below), further subtypes of tricks can be found, more than twenty of which John Cook has now described. Once you have seen through the basic strategies, says Cook, alongside other communication psychologists, you are much less susceptible to further attempts at disinformation – you are basically immunized against their spread. The FLICC poster is the result of a successful collaboration between Skeptical Science and their German language partner site klimafakten.de. You can download A3-format version of the poster from the klimafakten website or order A2 printouts from them.

The five main techniques depicted in the poster are these and they can be easily remembered via their mnemonic FLICC:

Fake experts are people who convey the appearance of expertise without possessing any actual relevant expertise.

Logical fallacies are false arguments leading to an invalid conclusion.

Impossible expectations demand unrealistic standards of proof before acting on the science.

Cherry picking involves focusing on select pieces of data while ignoring anything conflicting with the desired conclusion.

Conspiracy theories are created when science deniers accuse the world’s scientists of a massive, global conspiracy. 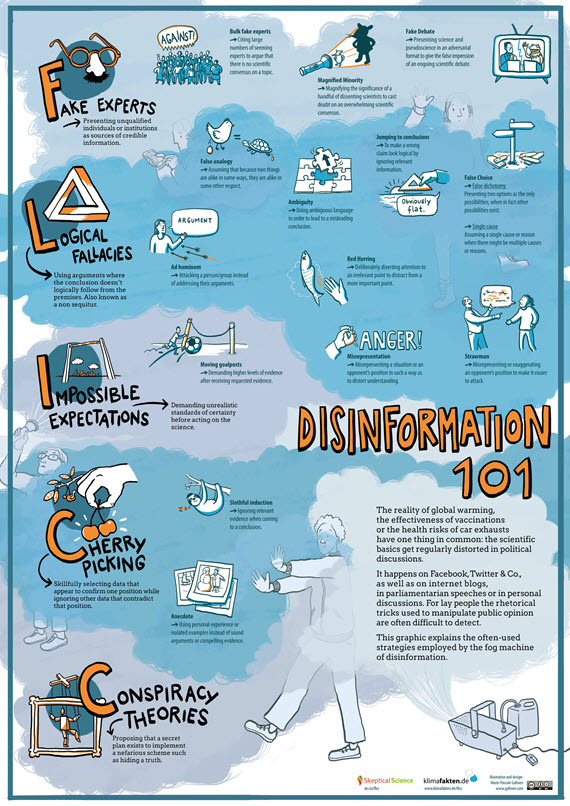 The History of FLICC

If the FLICC poster piqued your interest in the techniques of science denial, you’ll like John Cook’s account about “The History of FLICC” which he first published on his Cranky Uncle website (more about Cranky Uncle below) in March 2020.

When John Cook led a 2015 collaboration between the University of Queensland and Skeptical Science to develop the free online course Denial101x: Making Sense of Climate Science Denial, the made FLICC the underlying framework of the entire course. An important component of their debunking of the most common myths about climate change was identifying the denial techniques in each myth. A common comment we received from students was how much they appreciated learning about FLICC.

Since moving to the Center for Climate Change Communication at George Mason University, John has continued to build the FLICC taxonomy. In his collaboration with critical thinking philosophers Peter Ellerton and David Kinkead, he was introduced to reasoning fallacies that hadn’t yet been included.. As John begun developing the Cranky Uncle game, he began a series of fallacy quizzes where he gradually built the taxonomy up as he introduced people to an ever-growing collection of denial techniques (note the differing difficulty levels between quiz #1 and quiz #8). When Stephan Lewandowsky and John Cook published The Conspiracy Theory Handbook, they added the seven traits of conspiratorial thinking. Here is the latest version of the FLICC taxonomy (with all the icons freely available and shareable on Wikimedia): 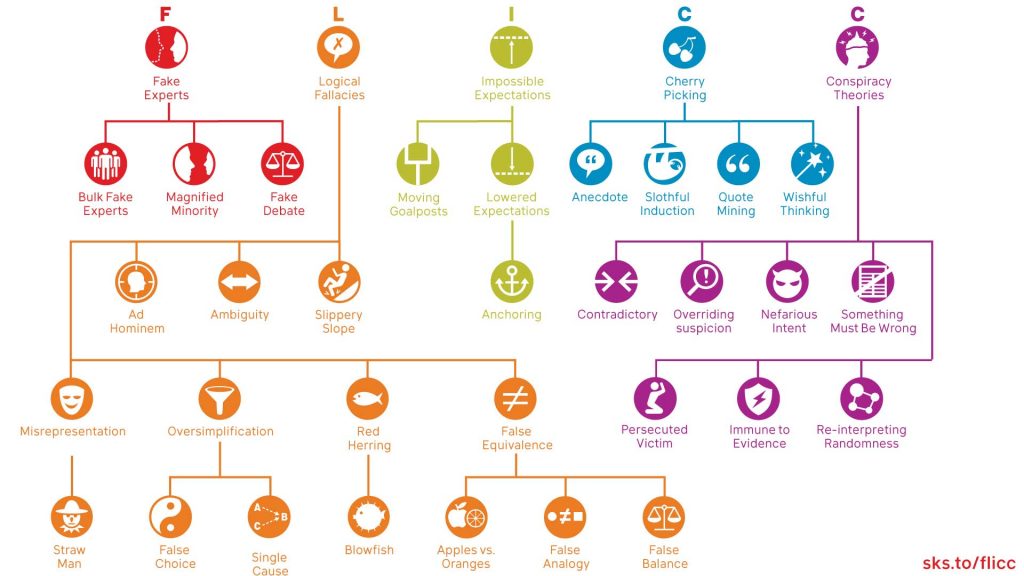 Cranky Uncle is the creation of scientist and cartoonist John Cook, who uses cartoons, humor, and critical thinking to expose the misleading techniques of science denial and build public resilience against misinformation. To explain why and how some people reject scientific evidence, Cook created the character Cranky Uncle, the family member we all have who thinks he knows better than the world’s scientists.

Via his Cranky Uncle blog posts, John provides free resources which can be used by teachers and science communicators to point out and combat misinformation. This is currently focused on critical thinking about climate science and COVID-19 but the information is transferrable to other topics.

The free Cranky Uncle smartphone game is currently being developed and in BETA-test, in collaboration with Autonomy, after a successful crowdfunding campaign in January. The plan is to release the first version of the game in December 2020. Sign up to receive the latest news and developments of the Cranky Uncle game.

This free smartphone game uses cartoons and gameplay to interactively explain the denial techniques used to cast doubt on (climate) science. Responding to misinformation is more important than ever in this post-truth era where science and facts are under constant assault. Research has identified a key solution is making the public more resilient against fake news.

In science, it’s called ‘active inoculation’ — learn how to spot attempts to mislead by first learning the techniques of denial. In the Cranky Uncle game, players are mentored by a cartoon personification of climate science denial. In this first version of the game, Cranky Uncle explains 14 techniques of science denial, from fake experts to cherry picking and a variety of different logical fallacies.

Update Dec. 1, 2020: John Cook announced on Twitter that the Cranky Uncle app will be launched on Dec. 15! 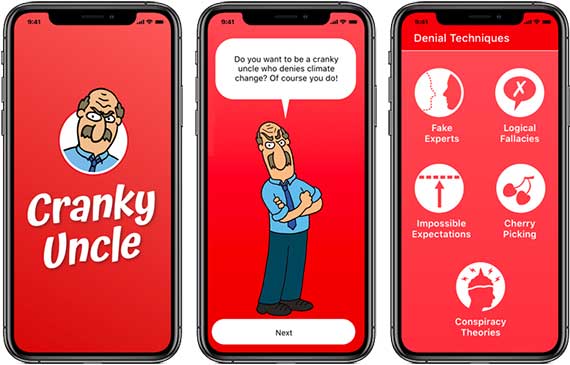 Some other active inoculation offerings

Until the Cranky Uncle app becomes available, here are some other offerings you could try out if you’d like to give active inoculation a try yourself. These games have been developed by cognitive scientists and can be played online. I’ve followed one of the lead scientists for these games – Sander van der Linden – on social media for a while and he has also collaborated with Stephan Lewandowsky and John Cook on several occasions.

In Bad News, you take on the role of fake news-monger. Drop all pretense of ethics and choose a path that builds your persona as an unscrupulous media magnate. But keep an eye on your ‘followers’ and ‘credibility’ meters. Your task is to get as many followers as you can while slowly building up fake credibility as a news site. But watch out: you lose if you tell obvious lies or disappoint your supporters! This game has already led to scientific research like this recently published open access article: Good news about Bad News: Gamified inoculation boosts confidence and cognitive immunity against fake news

In 2020, Dr van der Linden’s lab launched GoViral! in collaboration with the UK Cabinet Office with support from the WHO and United Nations. Go Viral is aimed at inoculating people against misinformation about COVID-19 specifically. You’ll learn about some of the most common strategies used to spread false and misleading information about the virus. Understanding these tricks allows you to resist them the next time you come across them online. Several articles about the game are available on the University of Cambridge’s website.

Harmony Square is a game about fake news. The game’s setting is the idyllic Harmony Square, a small neighborhood mildly obsessed with democracy. You, the player, are hired as Chief Disinformation Officer. Over the course of 4 short levels,  your job is to disturb the peace and quiet by fomenting internal divisions and pitting its residents against  each other. The goal of the game is to expose the tactics and manipulation techniques that are used to mislead people, build up a  following, or exploit societal tensions for political purposes.  Harmony Square works as a psychological “vaccine” against disinformation: playing it builds cognitive resistance against common forms of manipulation that you may encounter online.

Scientists who worked on the development of this game found that playing Harmony Square improves people’s ability to spot manipulation techniques in social media posts, increases their confidence in spotting such techniques, and reduces their willingness to share manipulative content with people in their network. The results of this study were published in the journal Harvard Misinformation Review, and can be found here. 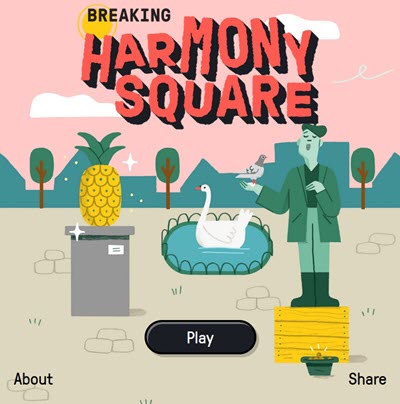 Hope you find these resources helpful! Should you have examples where any of them did in fact come in handy (or where they might come in handy!), please share your experience and thoughts in the comments.

As is your norm, the post is informative, to-the-point, with well-constructed thought patterns. 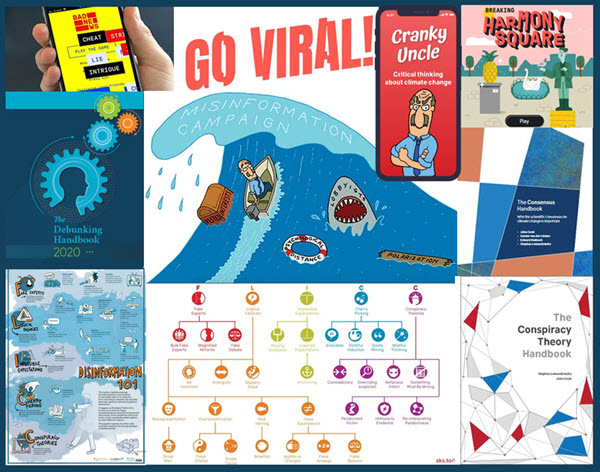