With Innovation of new technology and introduction of new tools by different Cloud Providers, I am trying to create a Blog on one of the most critical testing requirement for any SAP Landscape which is System Refresh or System Copy with minimum (zero) downtime with no Business Impact, by using AWS own native tool CloudEndure, which can be used for DR solutioning as well.

This Blog can also be taken as an entry point for all who is willing to plan for DR setup by utilizing this AWS CloudEndure tool in there AWS Cloud Account.

These are the following points which needs to be done before you proceed for adapting the process defined in this document:

Note: On all the above points I am not going to provide any detail in this blog. 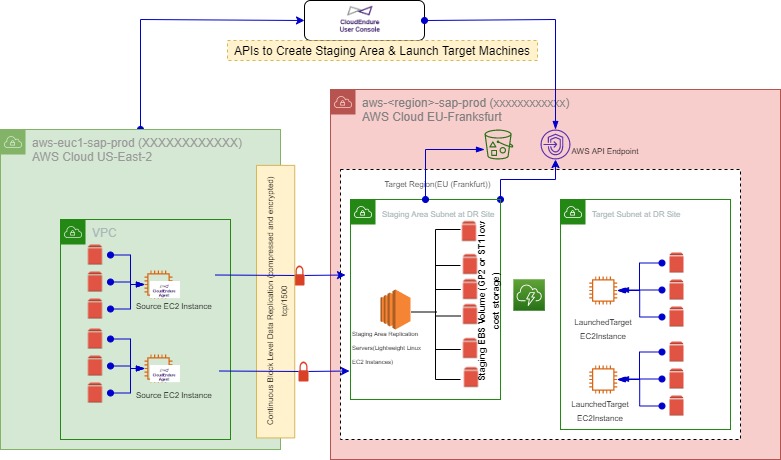 It supports all the AWS region. In the above screen shot i have shown specific region because in my example I have selected the above two regions.

Here I have taken one SAP application (WebDispatcher) which was installed in AWS US East 2 (Ohio) reason and I have used AWS CloudEndure and migrate the Entire Server to AWS EU Frankfurt Reason and rename the System, with no impact on the availability of my source system in AWS US East 2 region. All replication happened in the Background.

Some more details are as follows:

Before one can proceed one need to setup a Project in CloudEndure.

Create your account by login to the following link:

Setting up the Project steps are as follows: 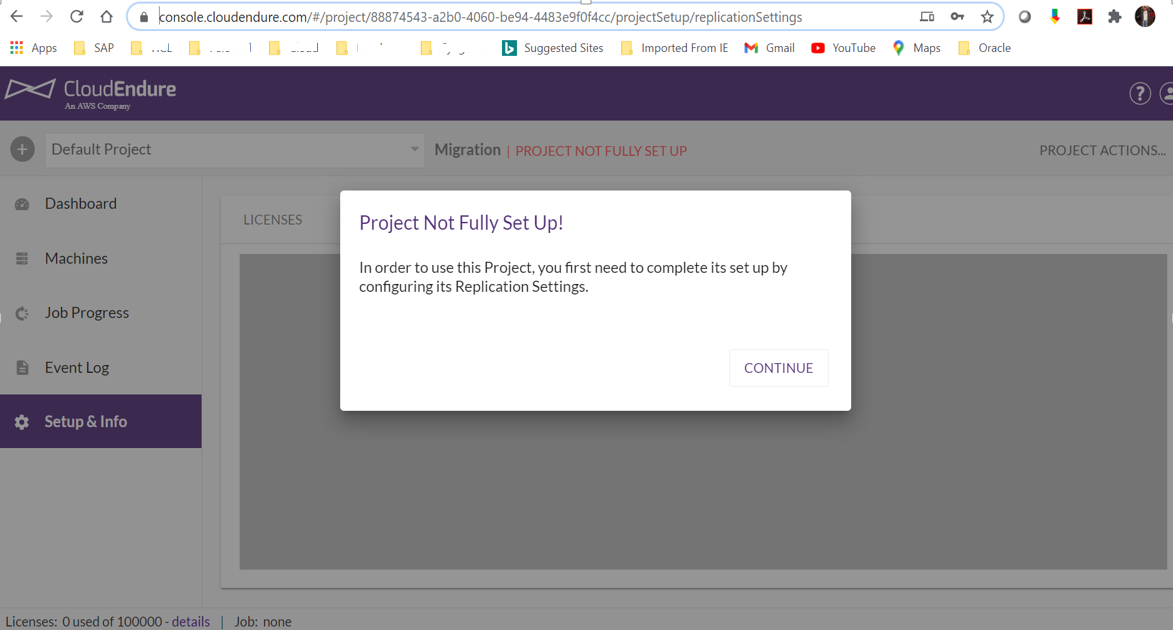 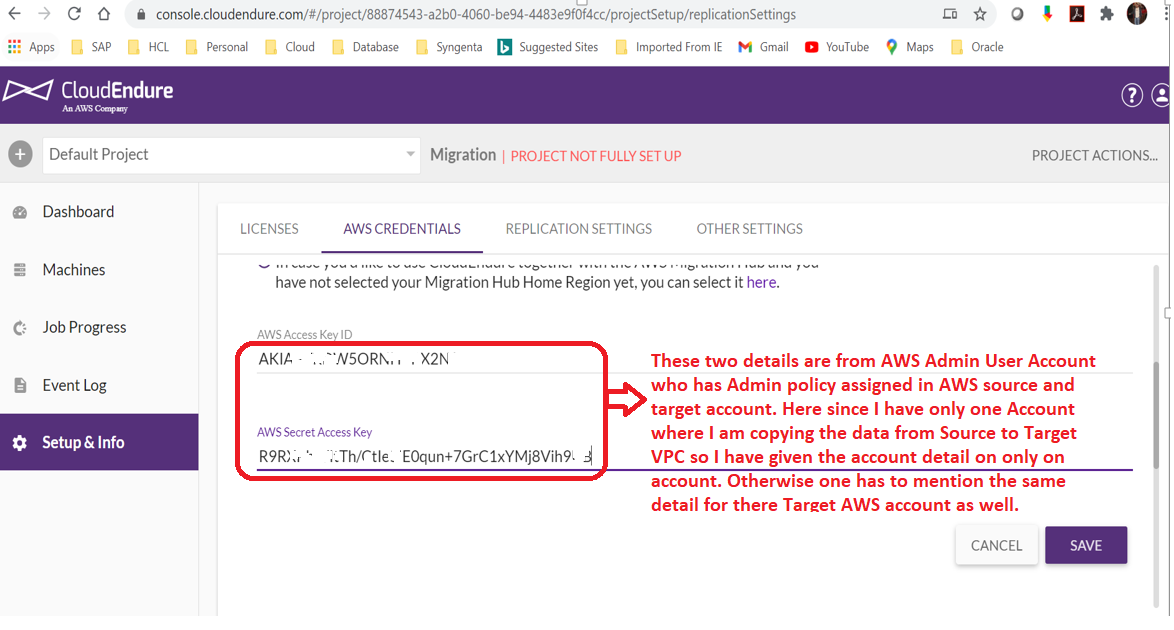 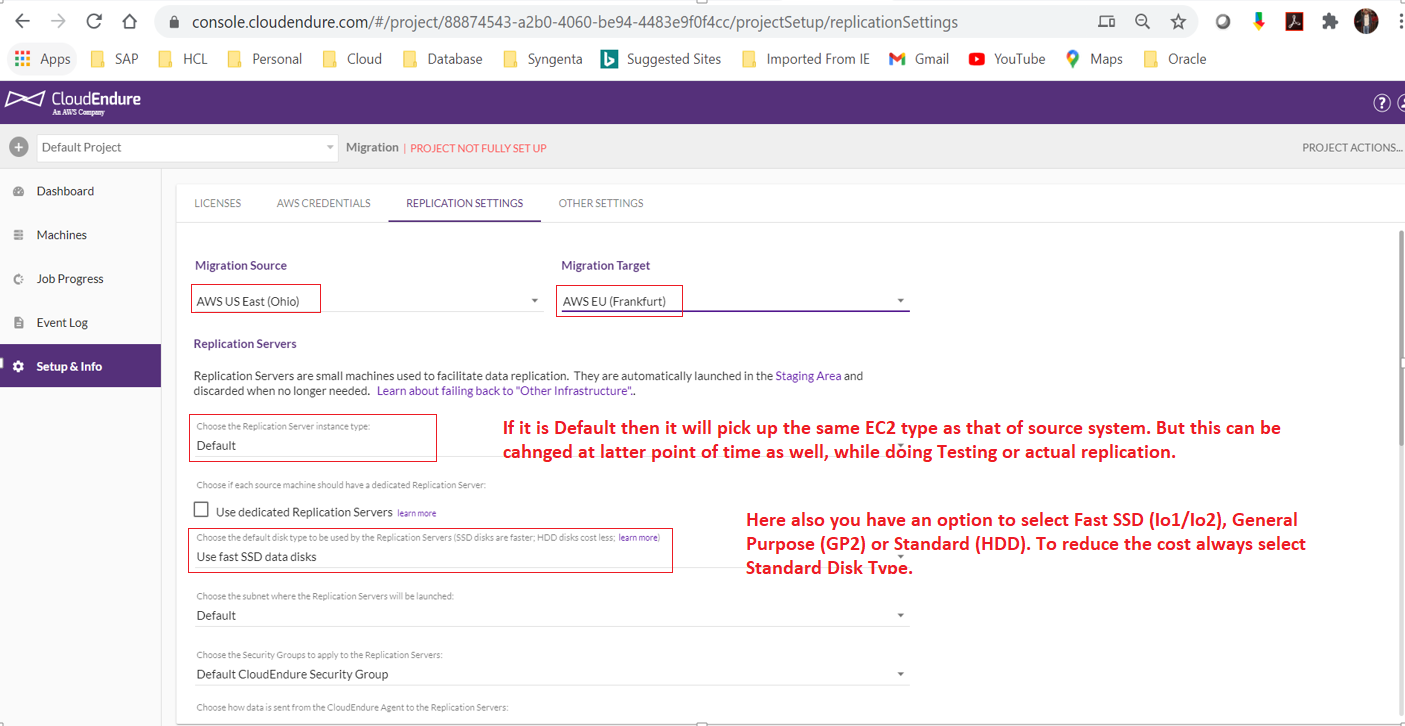 Now as per your requirement Provide detail in the Replication Settings tab. Recommendations for the above details are as follows: 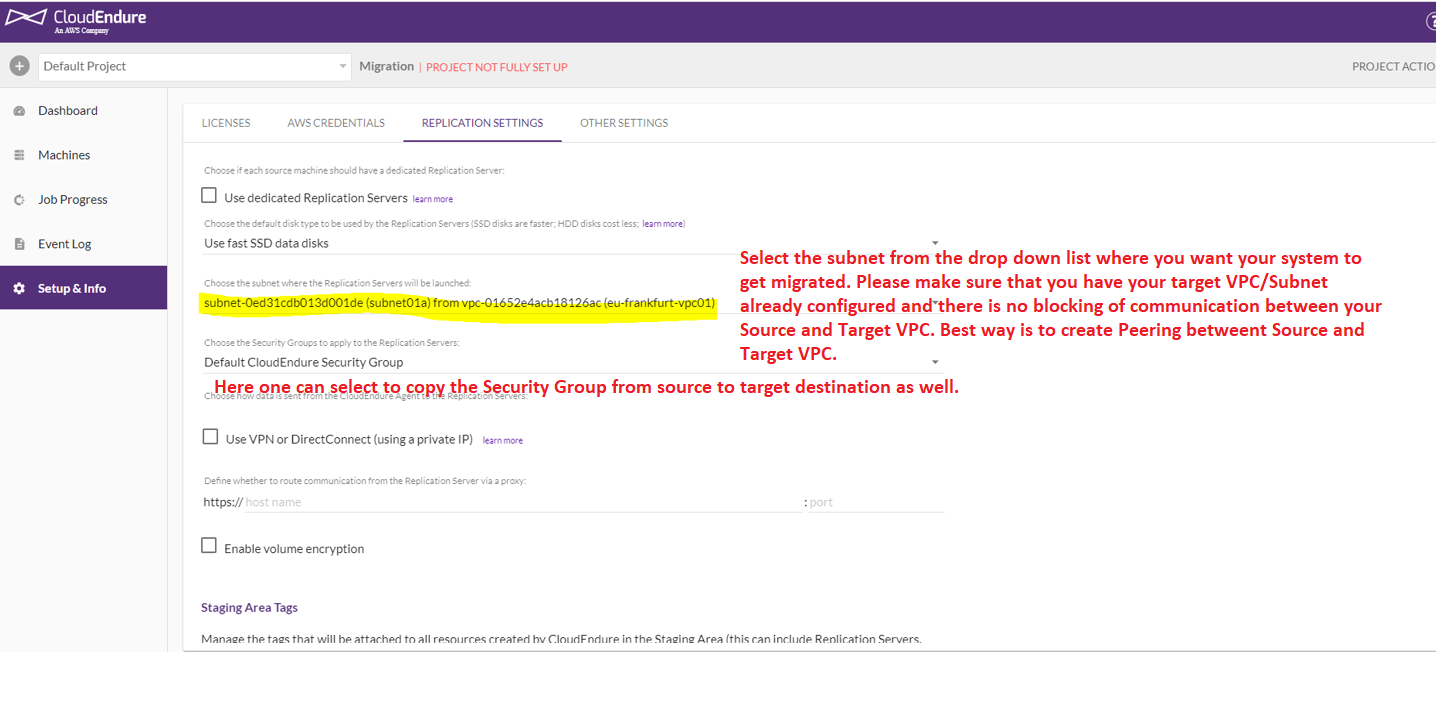 Now the next screen will show the process on how to register your Target Ec2 server with CloudEndure. 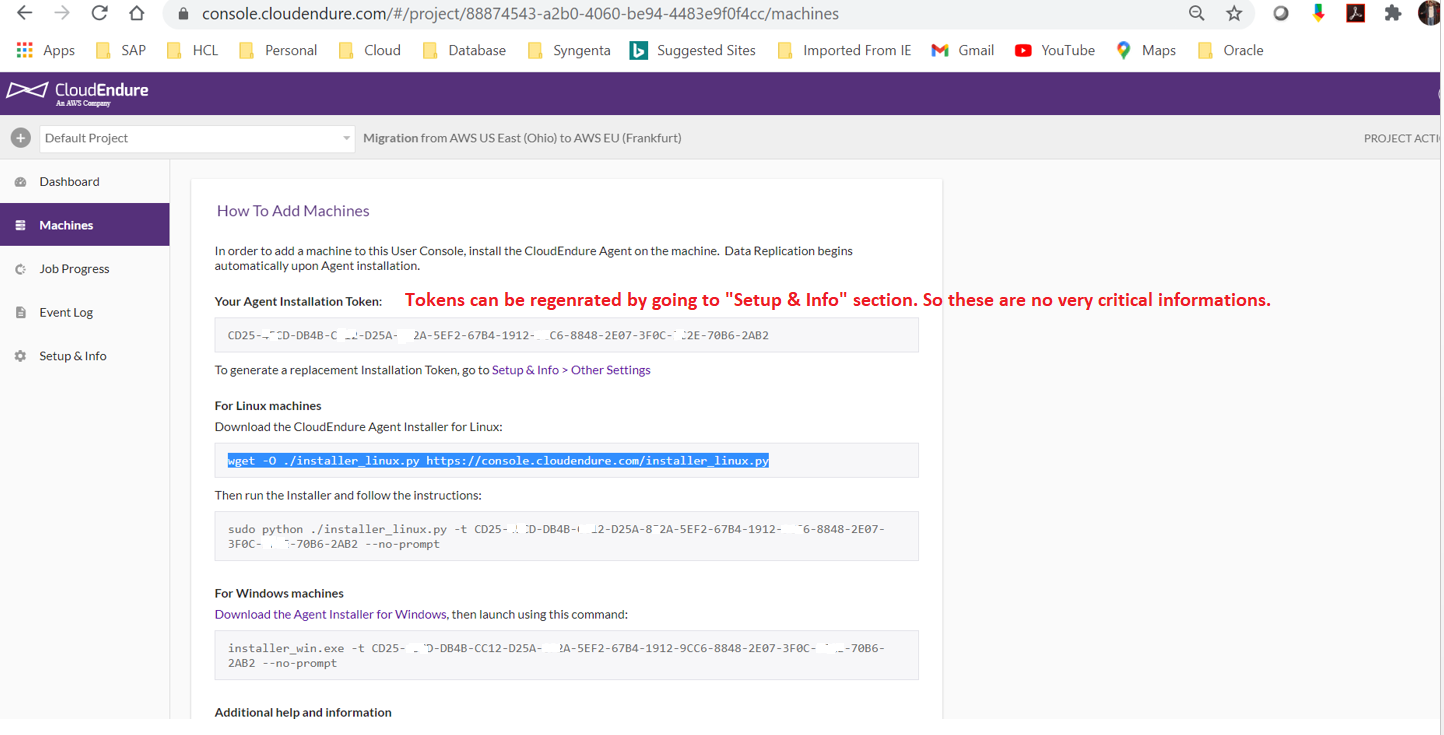 Login your Source EC2 server as “root” user and perform the following tasks:

Once registration complete one can see the following details in CloudEndure account.

Once the EC2 server on which SAP systems installed registered with CloudEndure, it will first fetch all the Metadata of the servers. One can see the process by double clicking on the Server registered above. 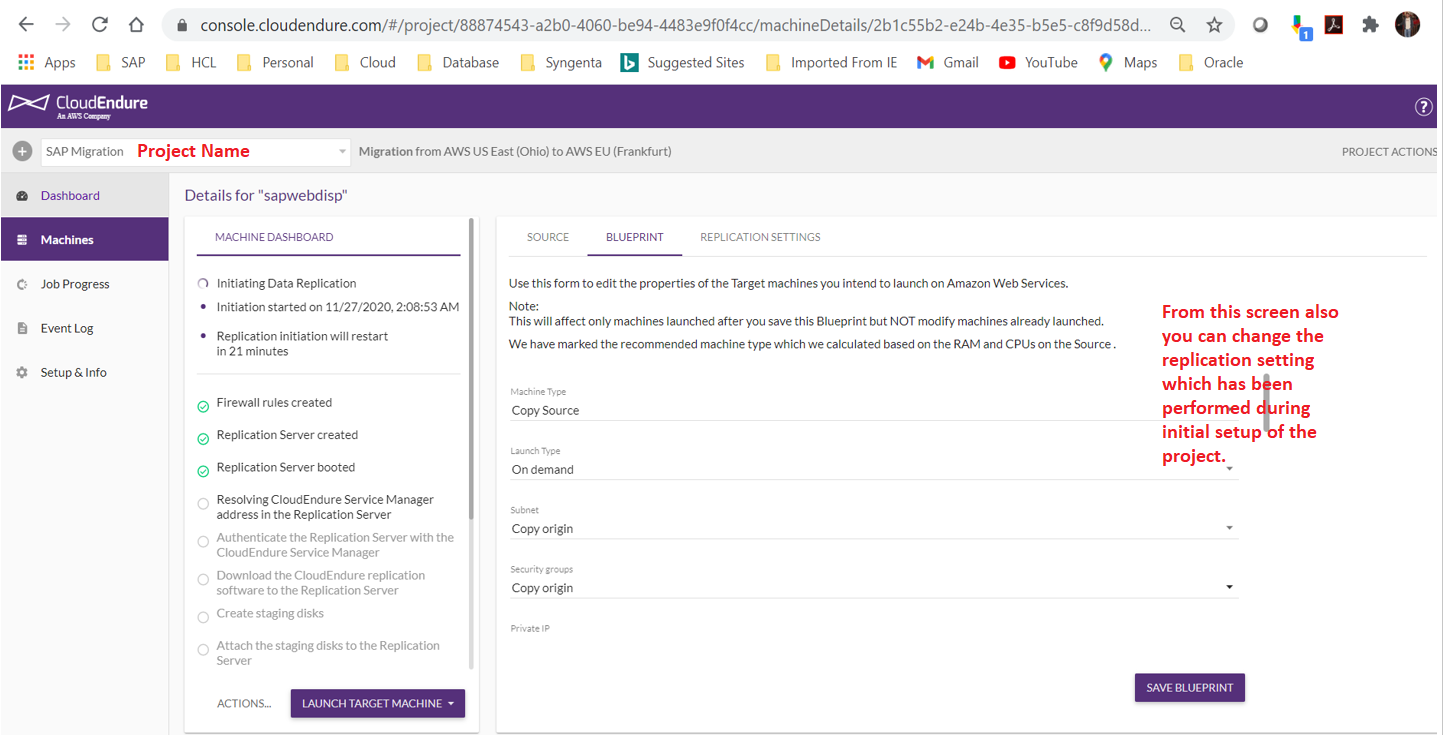 After the Metadata replicated to CloudEndure the actual replication of the Storage (EBS/EFS) volumes are getting started to the target AWS account through a very small EC2 server (t3.small), which can handle upto 15 EBS volumes. If more than 15 EBS is attached or the cumulative number of EBS volumes is more than 15 then an addition EC2 server (t3.small) will get started by CloudEndure. 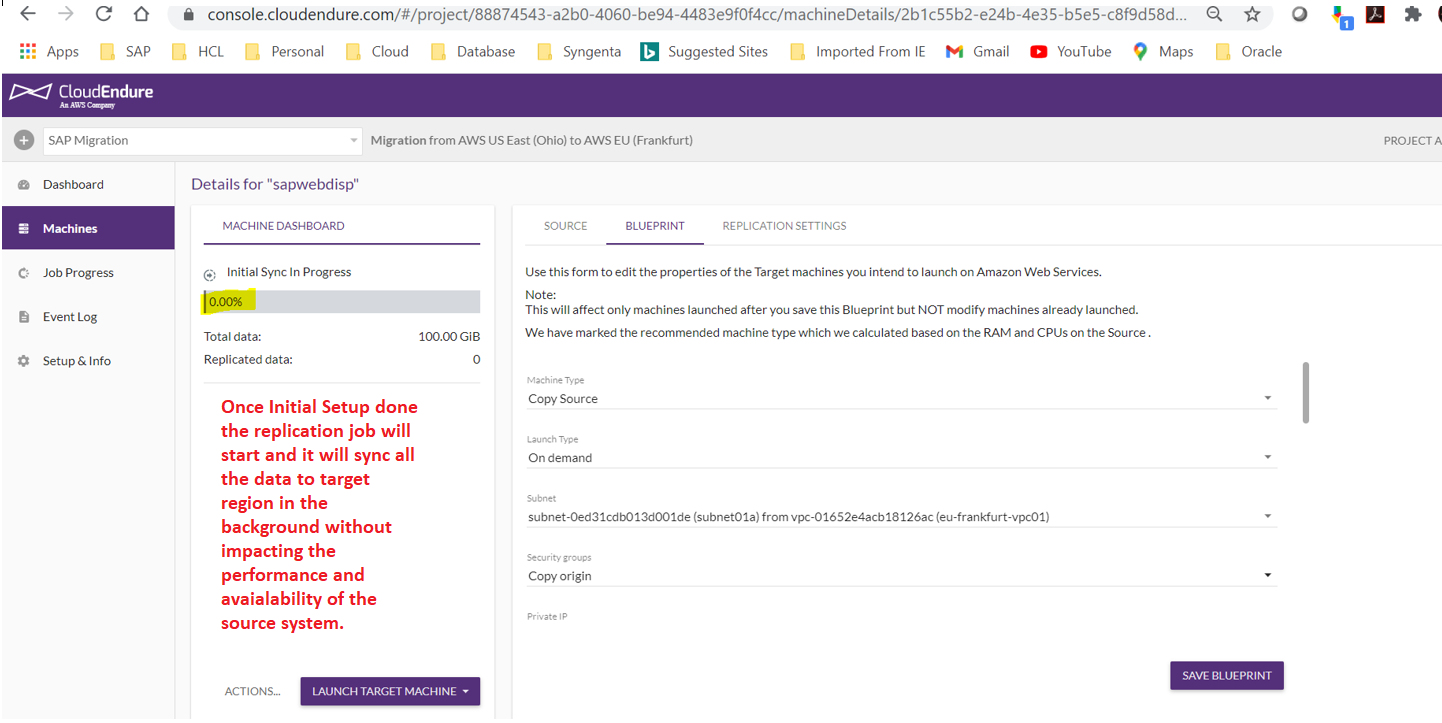 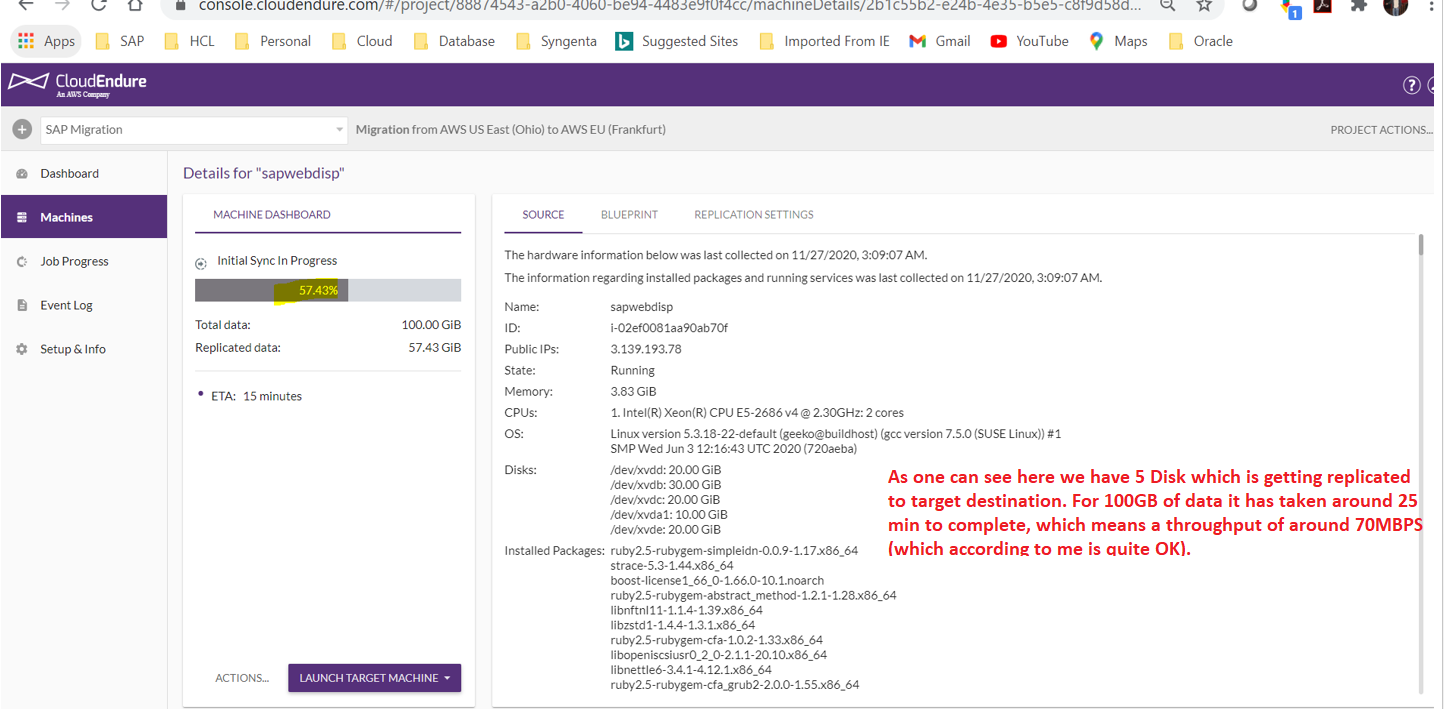 The throughput and IOPS are quite fine as it has taken only 25 minutes for 100GB of data getting replicated to Target AWS account. If Business is critical about the performance of there Source systems due to such additional IOPS and Throughput, then one can suspend the replication and start it as per Business workload.

Once Initial Sync and replication is over the status will change to “Never Tested”.

As one can see from the above screen shot that all the replicated EBS volumes (Disk) attached with the Replicating server (spun by the CloudEndure automatically). These are the EBS volume which are getting used for taking the snapshot when actual Target System Provisioning is being done.

Before actual DR or System Refresh/copy or Testing of DR the replication needs to be stopped as shown above. 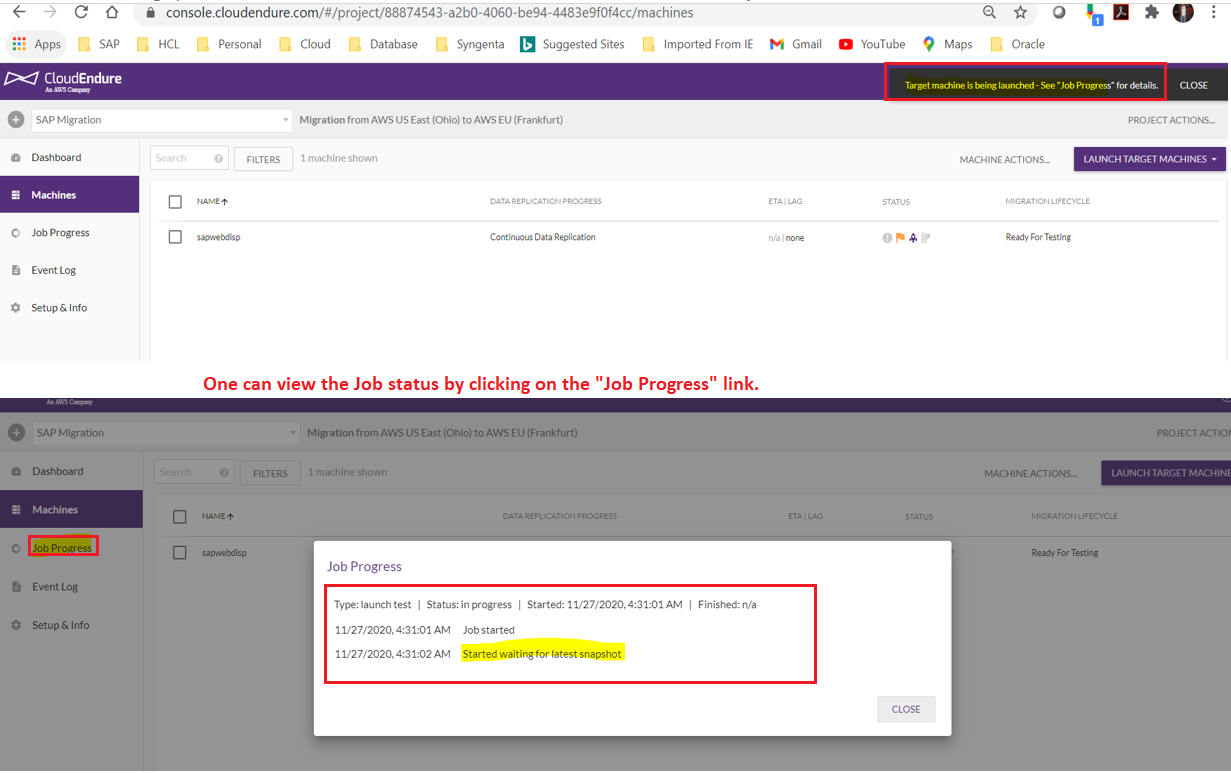 Keep monitoring the Job completion. It will take anywhere between 20-40 Min to complete.

After completion of the job verify the Server detail by login to your AWS console. 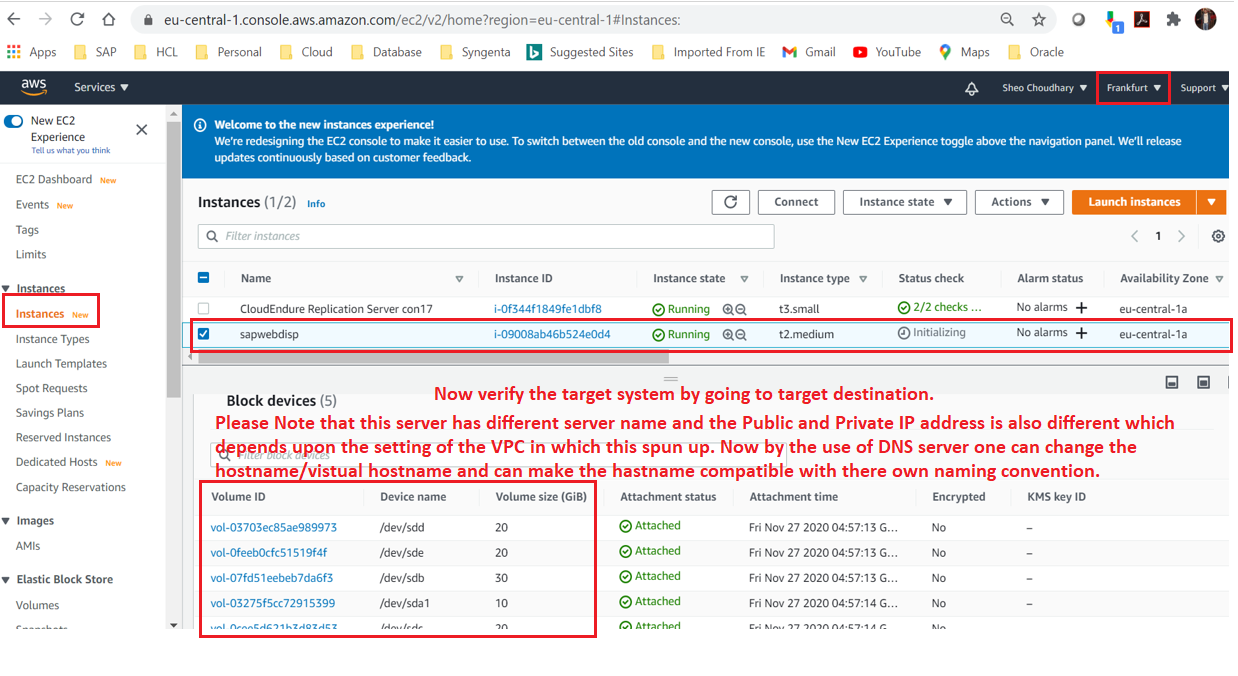 Every client has certain naming convention for there SAP Application servers. Once The server is available then adopt the server name accordingly and update this detail into the DNS server used for the entire AWS account. Sometimes customer using the virtual hostname and they update this virtual hostname in DNS against the actual hostname of the AWS servers. There are many ways to achieve this. 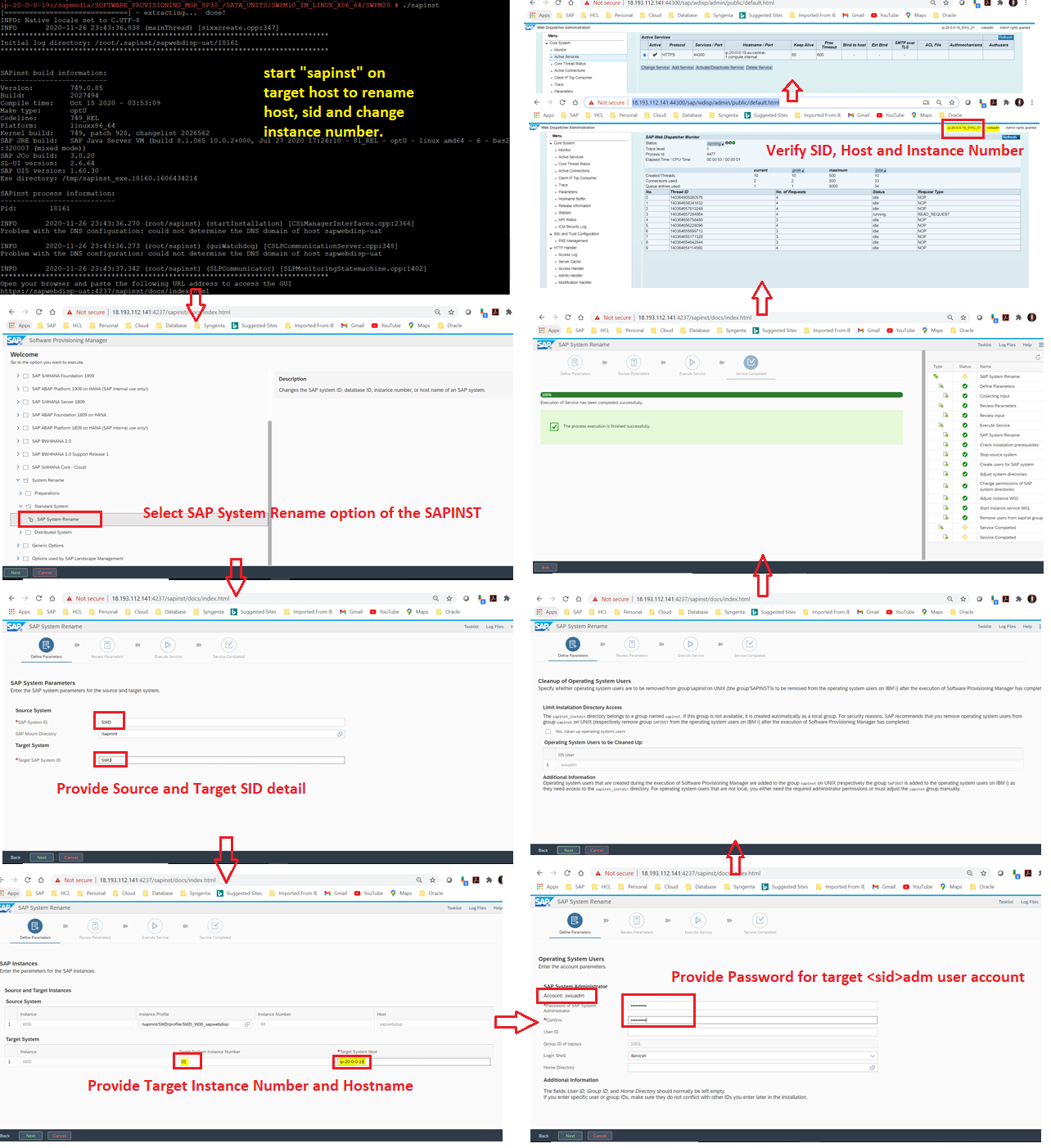 In this blog I am not touching upon the Post Activities which needs to be carried out after System Rename. Few of them may be as follows:

Note: Might be some more post activities would be there but that is not I want to cover in this blog.

In this activity we need to perform the following three tasks: 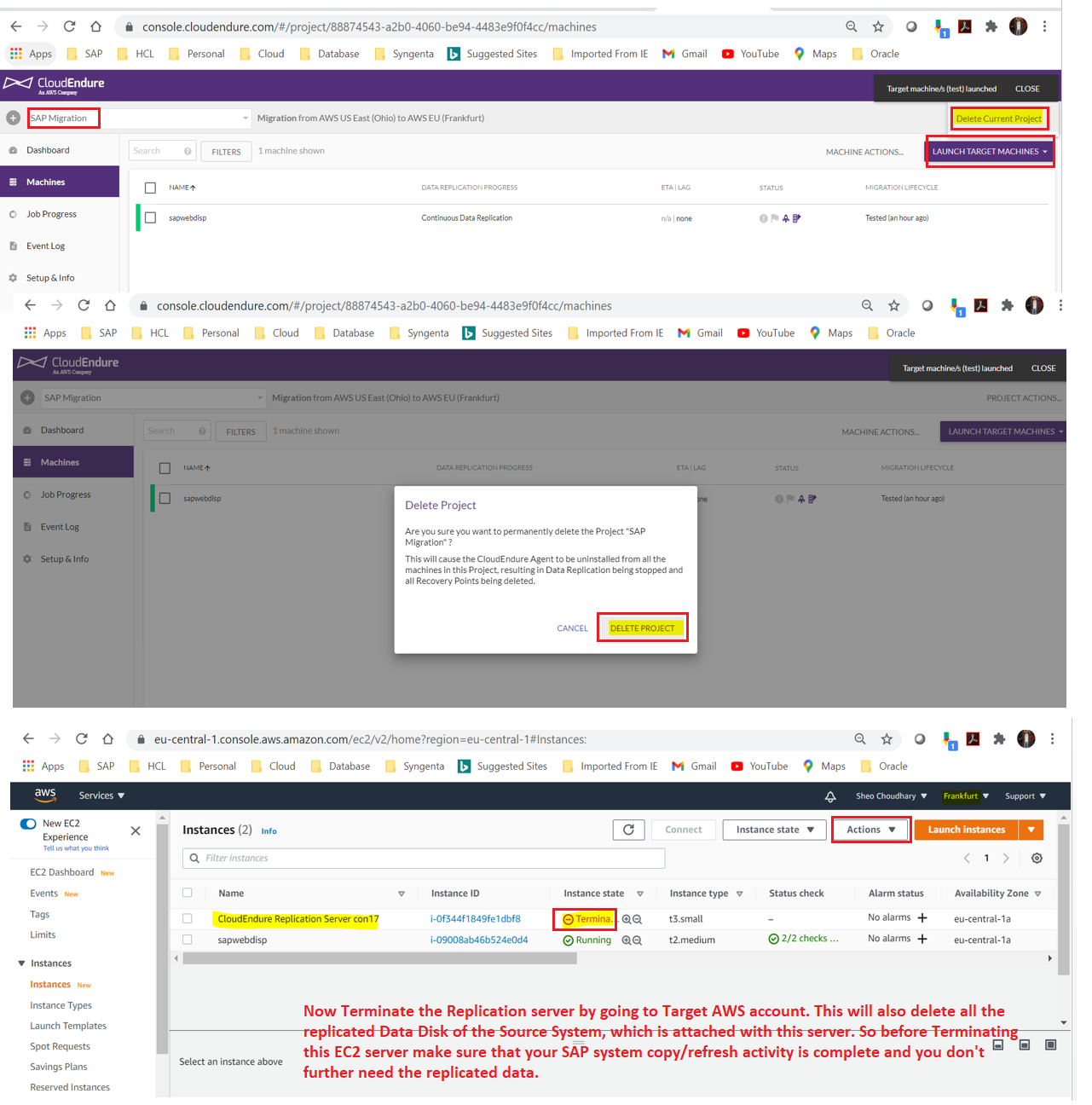 Some of the costing and important information of resource requirement is shown below:

Also I have looked into the Kernel Mismatch issue. But according to me if your OS is licensed then such issue will not appear and it’s a straight forward task.

I haven't introduced any tool as System Refresh or System copy tool. This tool has already been introduced by AWS as DR setup tool. I have just utilized its functionality to use it for SAP requirement.

Regarding number of Snapshots, then why to consider this aspects when we knows what we have to achieve. I am talking about all temporary setup for performing SAP refresh and once we have one consistent snapshot available then why to keep taking snapshots or continue using this tool when we know that one snapshot is enough to meet our requirement.

Hope now you understand why this blog is and what respite I am willing to give to our SAP Basis folks;)

Still feel free to reach me if you have any further query.

This information is all about SAP system and its working mechanism for zero downtime by using as cloudendure. If you are looking for best proofreading service for your college work, then you should try this one. This proves helpful for improving your writing skills.