OData V4 has been standardized by OASIS and approved as an ISO/IEC International Standard. This is one of several reasons why it is the protocol of choice for enterprise applications for many of our customers. It also comes with a number of benefits compared to version 2, for example reduced metadata size through service partitioning and compact JSON format or built-in analytics features. Additional information on OData, why it is important for SAP and in particular for SAP Fiori elements is outlined in our initial announcement about the OData V4 beta program.

This initial version, which we have released with SAPUI5 1.84, includes the most popular floorplans –  list report/object page –  as well as initial support for the existing overview page, allowing to display content coming from both OData V2 and/or V4 services. It also introduces the Flexible Programming Model, which enables increased lifecycle stability, UX consistency and development efficiency for extensions. These extensions allow you to use SAPUI5 freestyle code – as custom pages, sections, actions, fields, columns and filter fields – within SAP Fiori elements apps. Find out about the supported features using our feature map. And of course, SAP Fiori tools will give you the same great developer experience that you are already used to from the OData V2 stack also for creating OData V4 based apps. 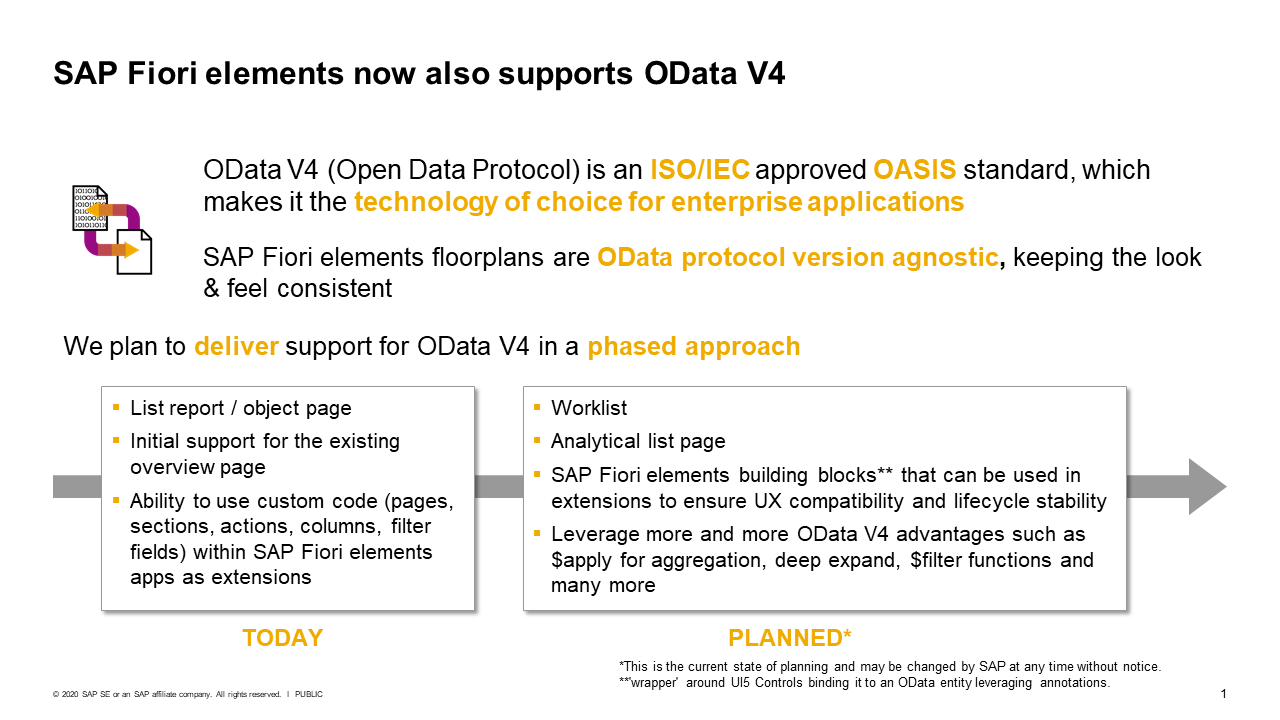 We also successfully ran a guided beta program with who have used the new functionality to build their own apps using the SAP Fiori elements floorplans for OData V4. The feedback was very positive and clearly told us that the functionality is ready to be released!

So you can now get access to the SAP Fiori elements libraries for OData V4 through SAPUI5 1.84.

You can create your own SAP Fiori elements list report / object page based on an OData V4 service built on SAP Cloud Application Programming model in this tutorial.

Furthermore we are also offering a hands-on session at TechEd. If the session is full, no worries, we plan to make the material available after SAP TechEd so you can try the exercises on your own.

We plan to deliver additional functionality for the SAP Fiori elements floorplans for OData V4 in a phased approach, focusing on:

Kindly note that this is the current state of planning and can be changed by SAP at any time without further notice.

Where can I find more info on new V4 floorplans, like design guidelines, examples etc.?