Predictive Planning – How to use influencers 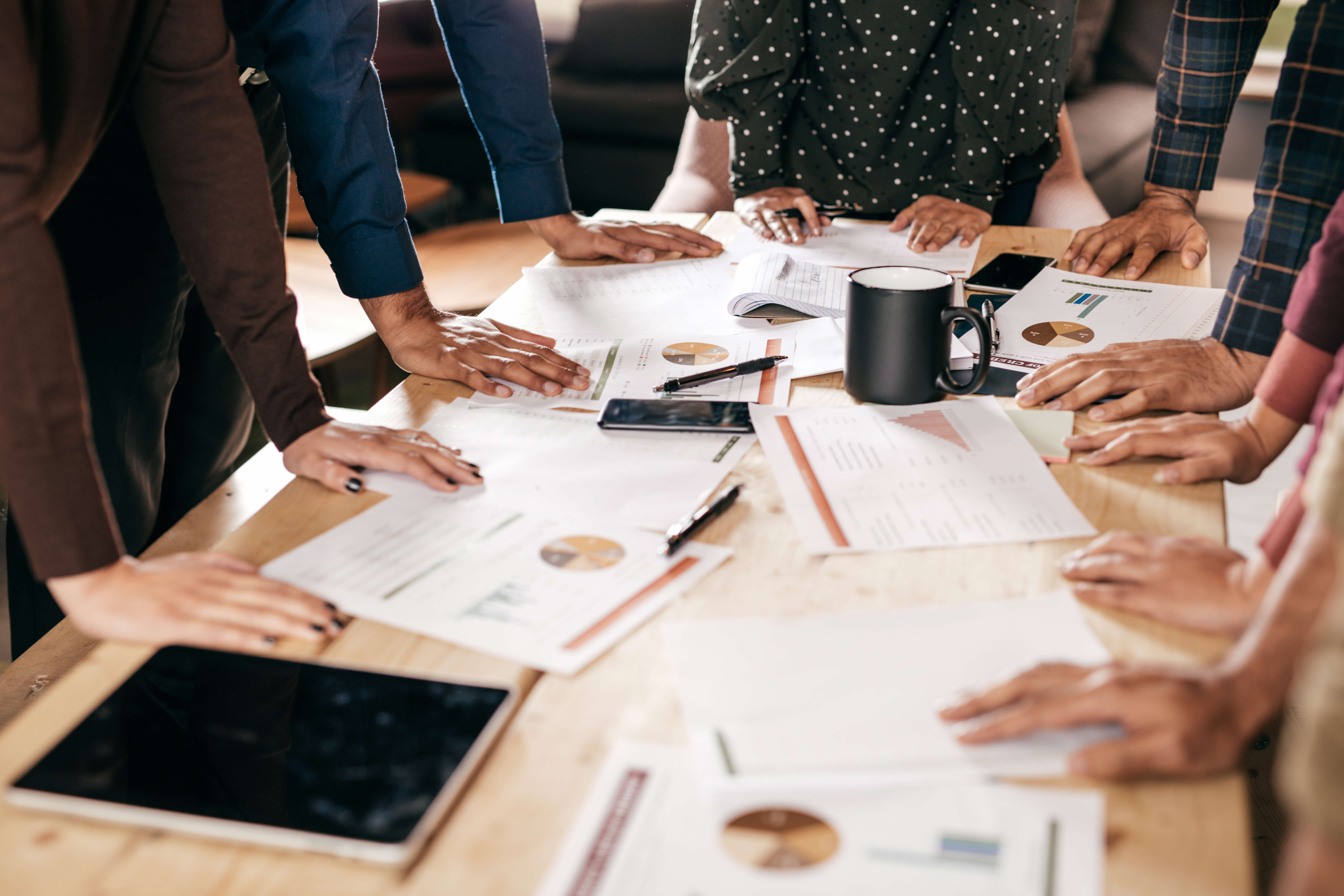 I illustrate my explanations using a bike rental example. The goal is to plan daily hires of bicycle rental in London. To do this I have historical data from 2011 to 20th September 2015. The table below shows for each day the number of bikes hired. 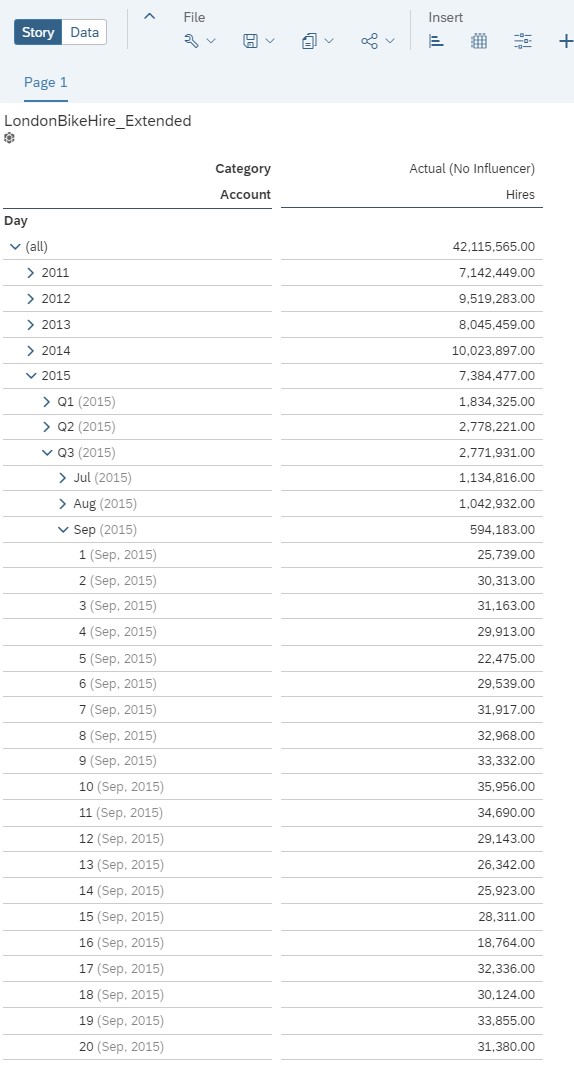 The predictive model I get has a HW-MAPE of 19.74%. In the figure below, only a linear trend and fluctuations are detected. However, there are no recurring cycles detected. 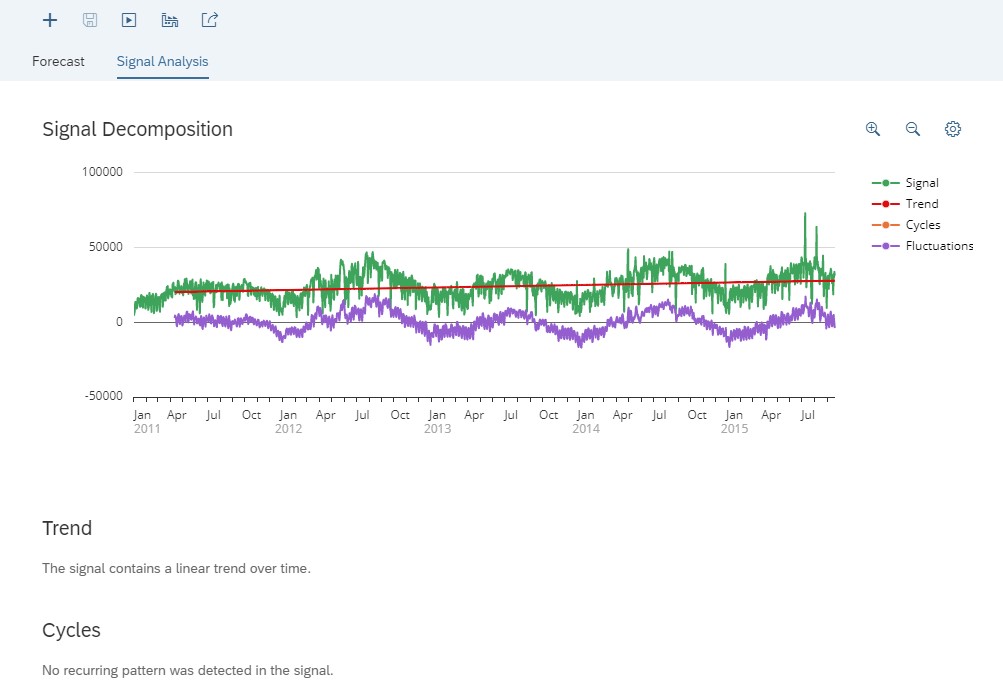 Fig 2: Decomposition of the evolution of number of bikes hired

This predictive model gives the forecasts shown below. 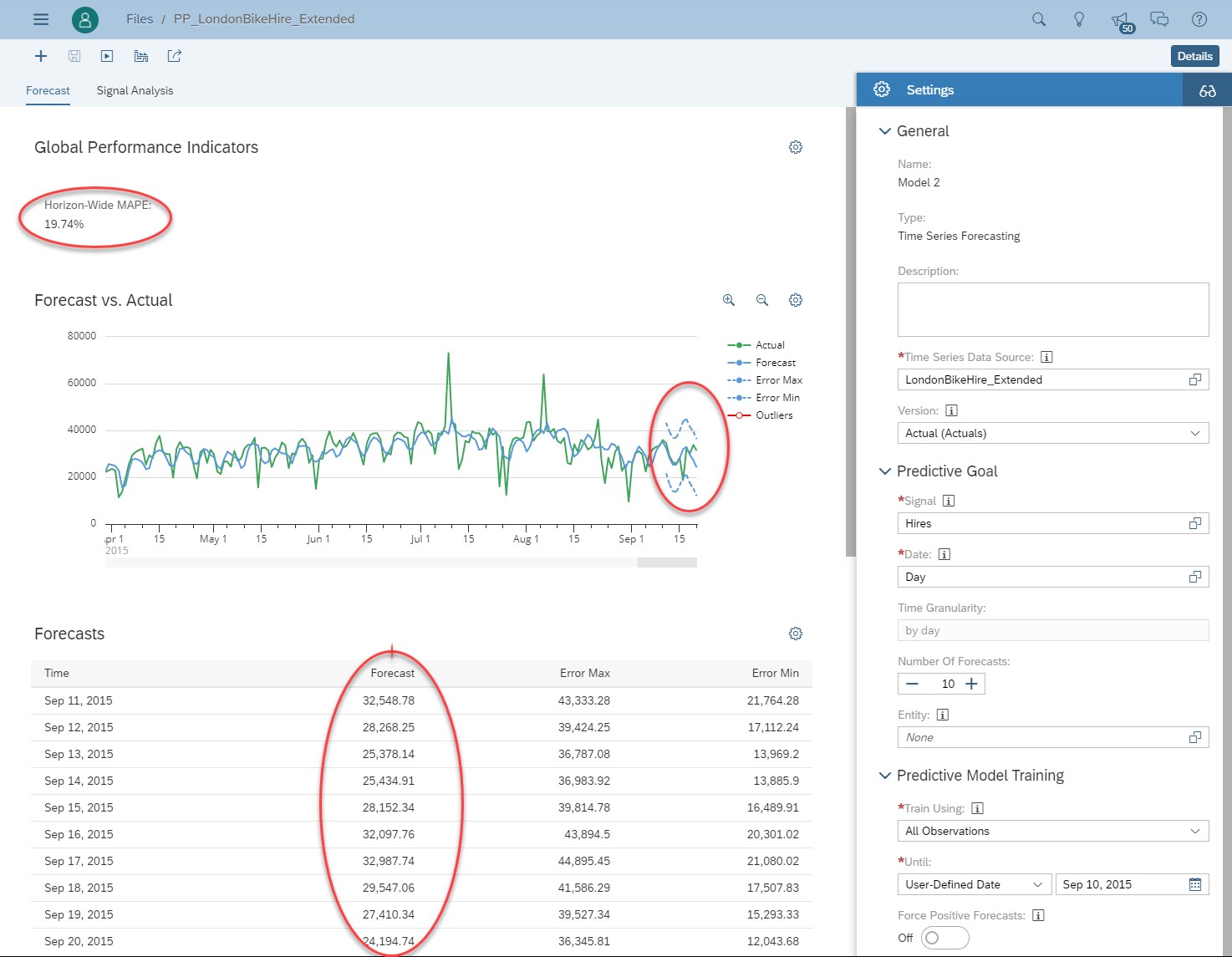 I display actuals & forecasts side by side in a table. I filter on the predicted dates to focus on the comparison between the predictive forecasts for September and the actual values of the hire of bikes. The difference between these values between September 11th and September 20th is on average 11.46%. 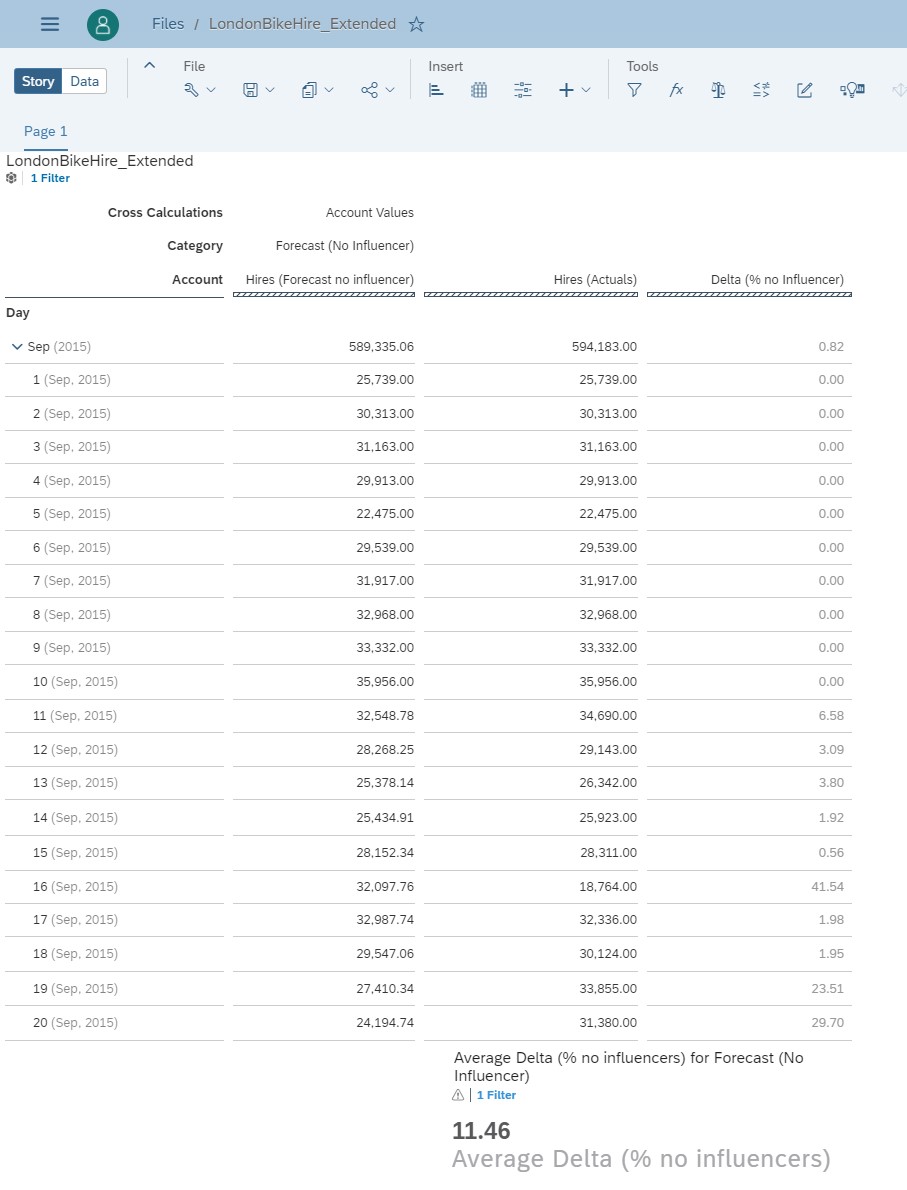 Even if these predictive forecasts are accurate, I am not completely satisfied with them, because I feel that I have not used all the information I have. Since the beginning, I have recorded other information like:

In total, there are 66 other measures and dimensions, and I wonder if they have an influence on my bike hire activity. I want to try out whether including these influencers will improve my predictive forecasts. These measures and the number of bikes hired are recorded into a dataset. 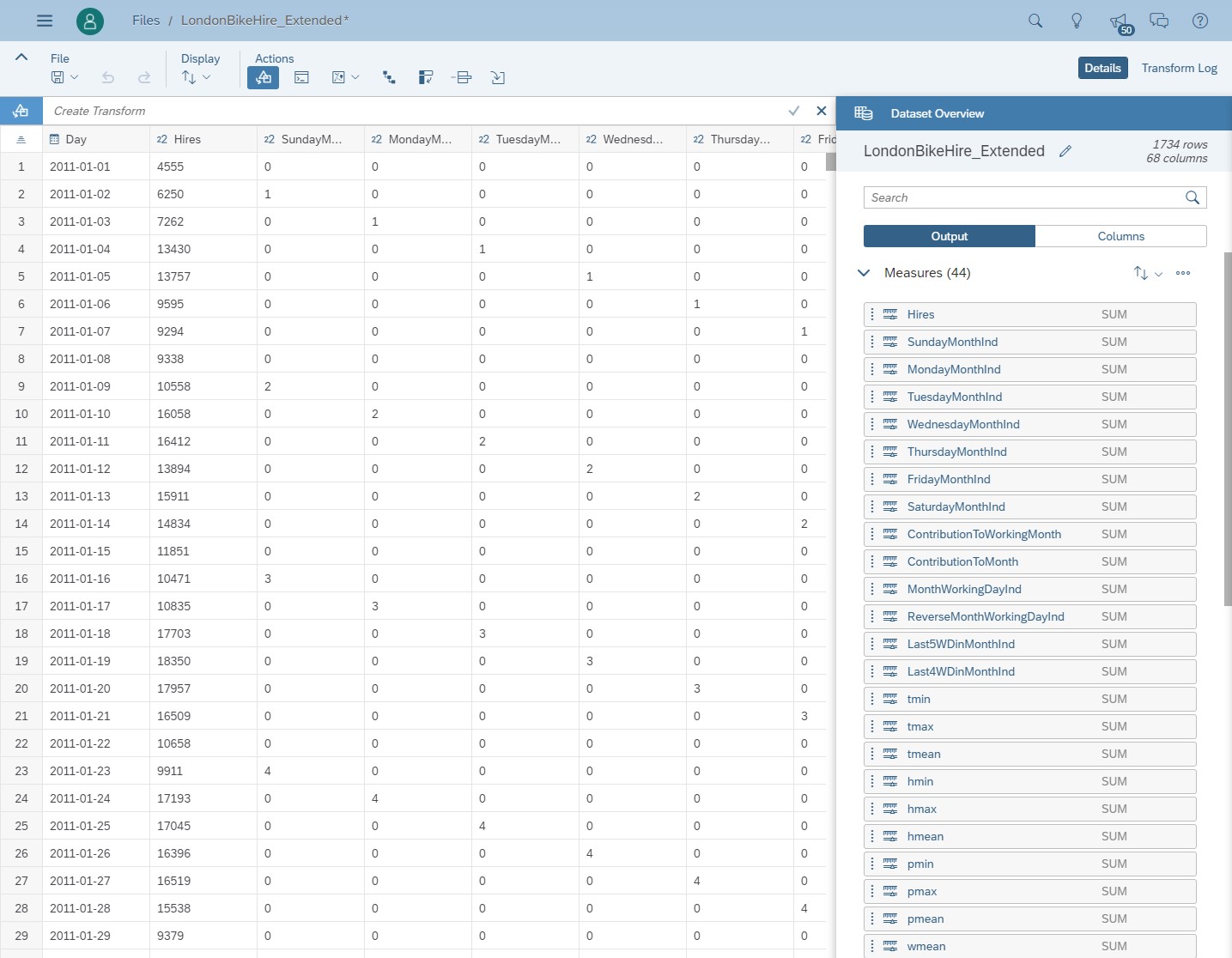 The settings of this predictive scenario are almost the same as those of SAP Predictive Planning. The differences:

Fig 6: Setting of the predictive scenario 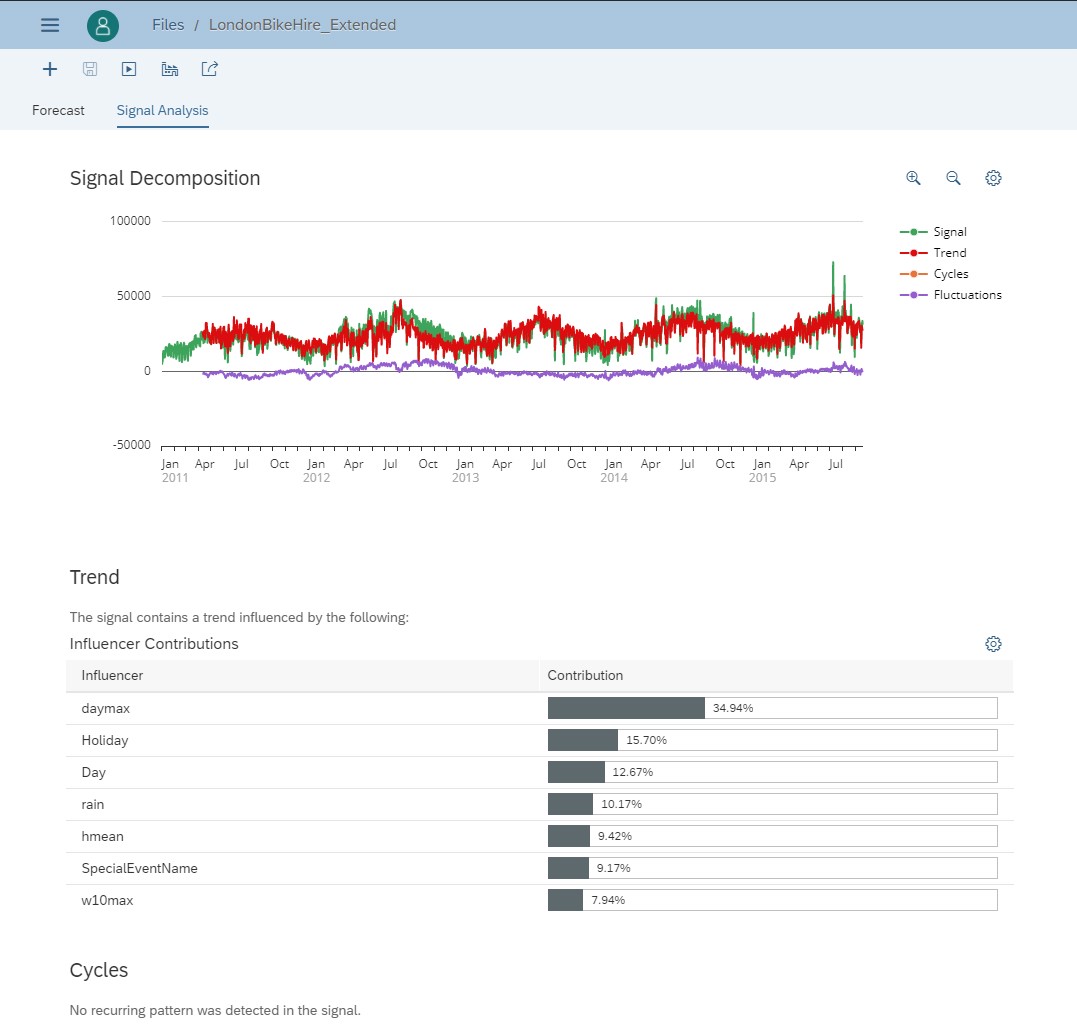 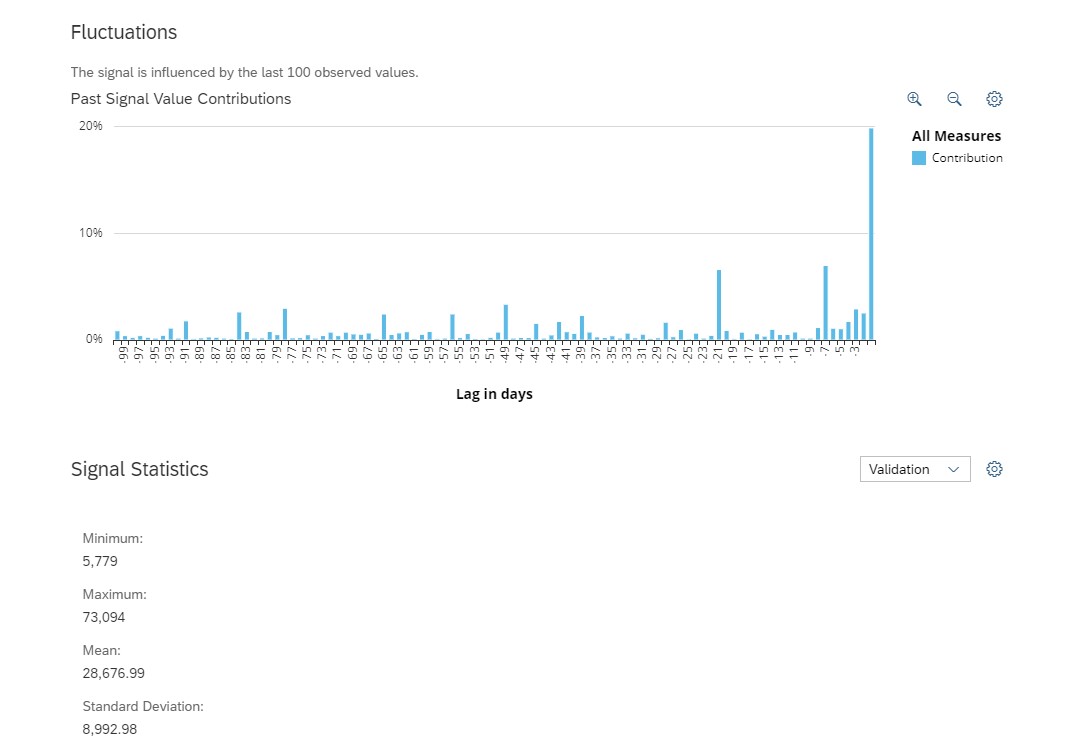 Fig 7: Decomposition of the evolution of bike hired

This predictive model gives the forecasts shown below. 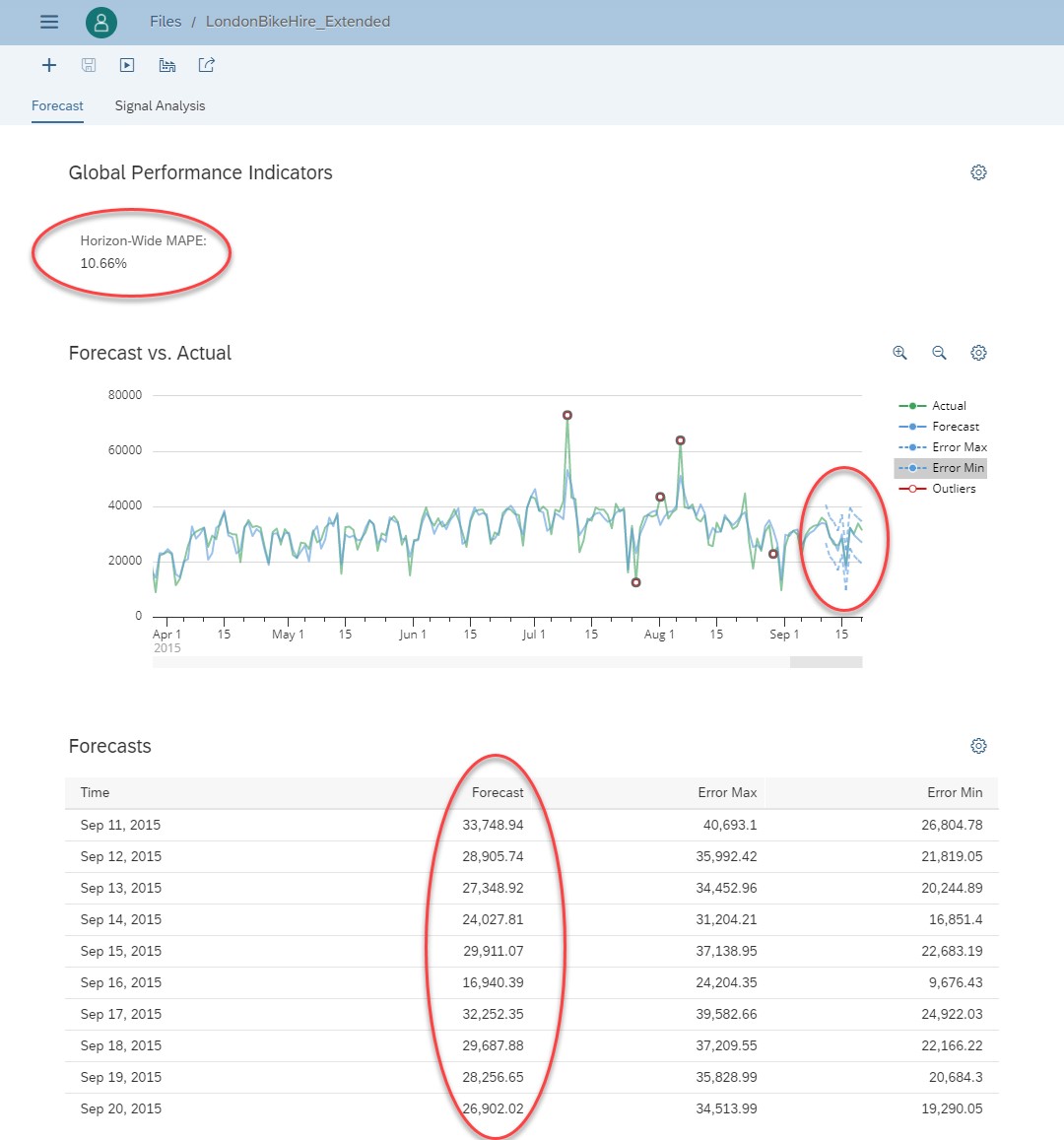 The confidence interval is on average equals to 14,567. It is 37.5% less than in the first predictive model. This also confirm the added value of using influencers.

Now I save my predictive forecasts into a dataset named LondonBikeHire_Predictions. 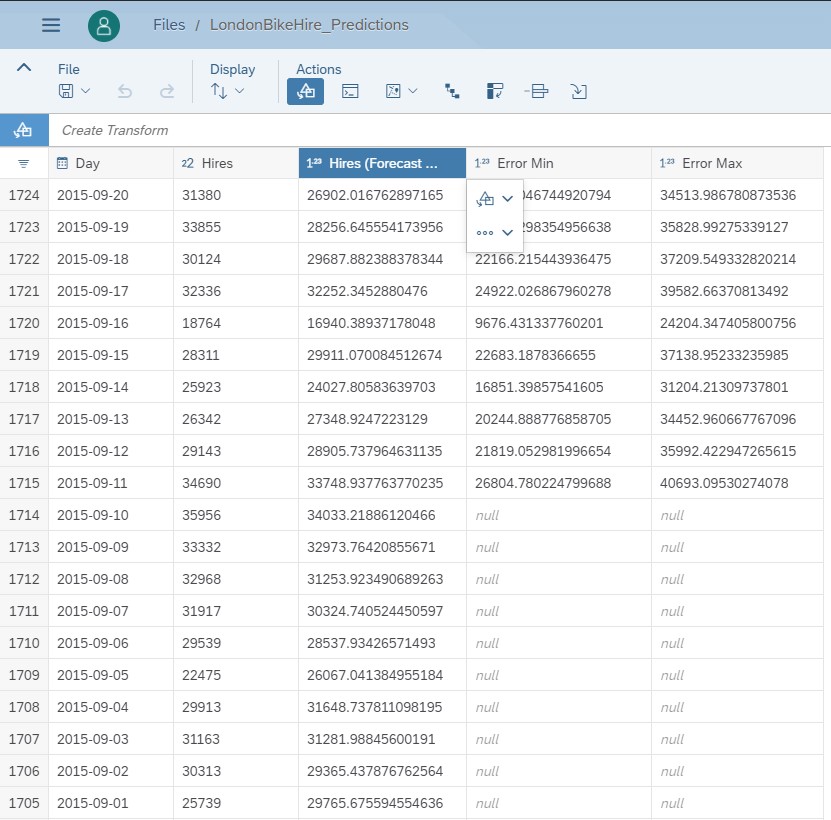 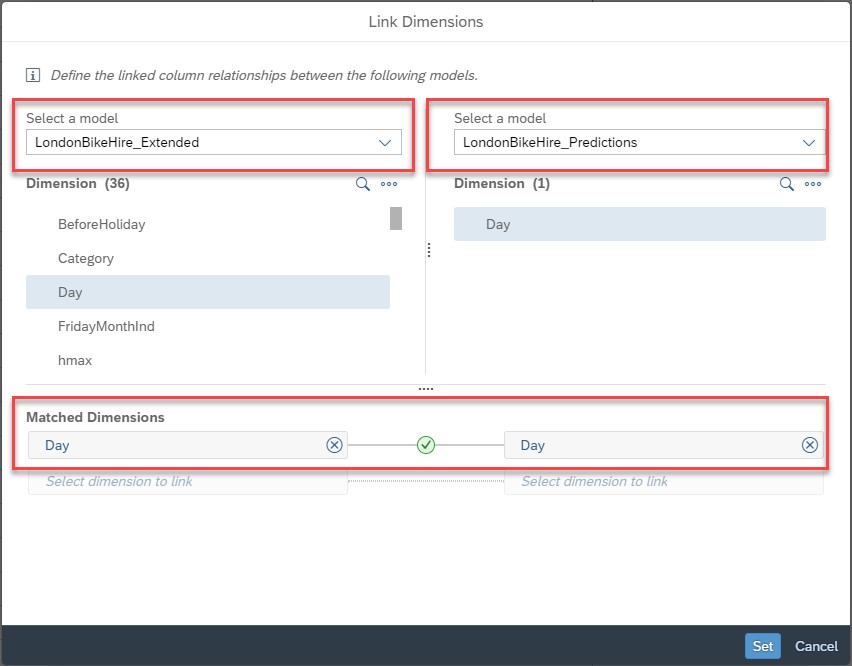 To focus the attention of the predictive forecasts and their comparison with actuals, I filter the time dimension on September 2015. The comparison is done with these calculated measures: 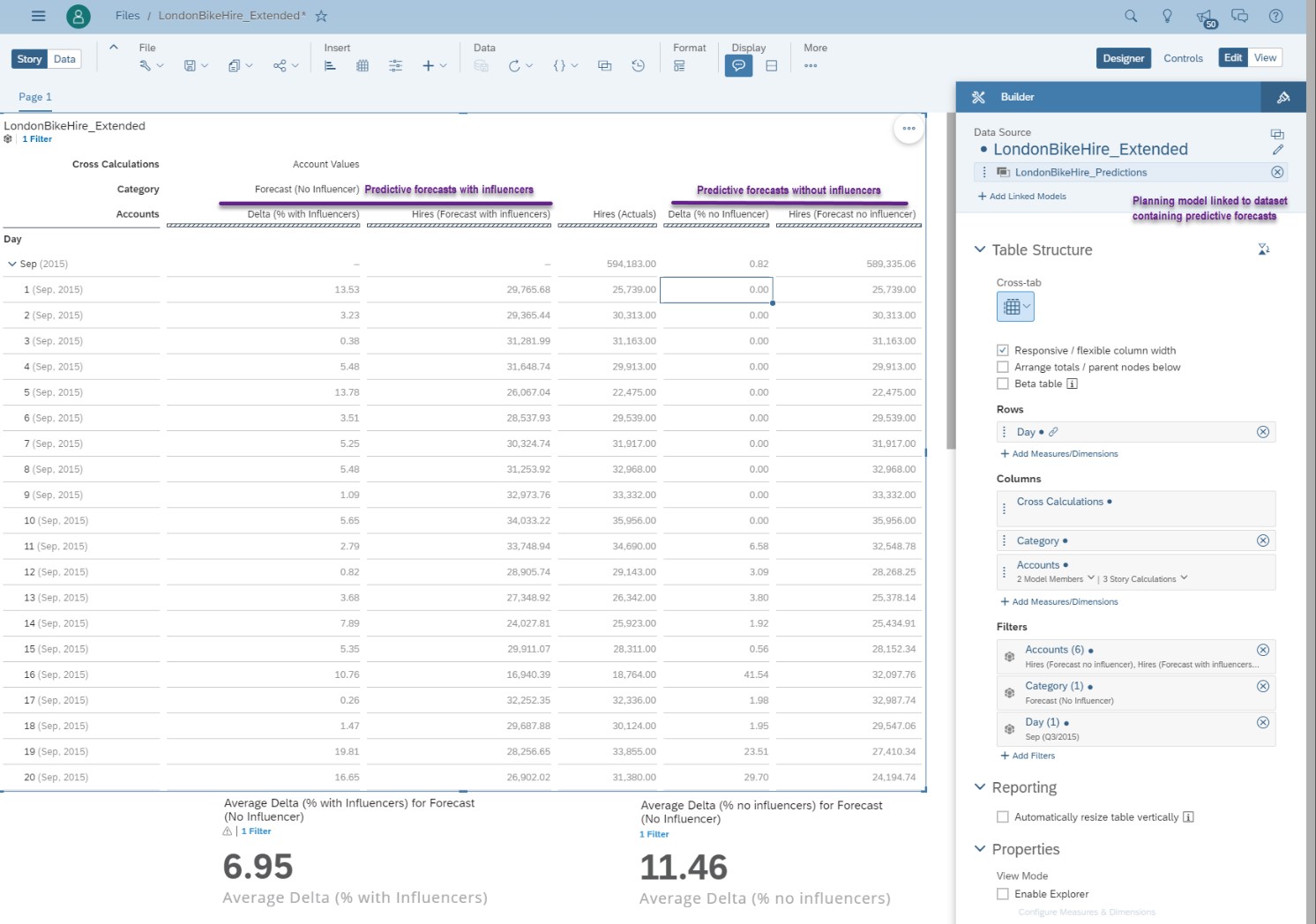 So, in certain cases, adding influencers might help refine the accuracy of the predictive forecast. If this happens with your use cases, you now have a way to bring this added value to your planning stories.

I hope these steps will help save you some time in the future. If you appreciated reading this, I would be grateful if you left a comment to that effect, and do not forget to like it as well. Thank you.

Is it true, that you need to have those additional influencers already in the future (future= the time we want to predict)?

Just asking as you take e.g. the influencer "rain" - how can we already know that KPI in the future?

Marcel Reinsch Antoine CHABERT  because we are dealing with LondonBikeHire dataset, i have a 99.9% confidence interval that it will be raining here in the UK 😉  and 100% confidence that the British will be talking about the weather!

Thanks for the great blog Thierry BRUNET many thanks for putting this together and explaining the capabilities. sorry for the sidetrack!

Nice one :-). Sunny weather forecasted here for the week-end. I might go cycling! Cheers, Antoine

Hi Marcel, you are fully correct to this. While Predictive Planning cannot predict the future rain, you can place some estimates what's a typical weather might be like. To your point though by doing this, you move more to a form of simulation, and you can also do pessimistic/optimistic/middle scenarios. A whole range of possible applications! Kind regards, Antoine

And especially important in the disrupted times we are collectively going through.

The dataset used in this blog can be found here: https://github.com/antoinechabert/predictive/blob/master/LondonBikeHire_Extended.txt

Please note we delivered a feature in the August 2021 release of SAP Analytics Cloud to support the use of influencers directly from the planning model. See a walk-through example here: https://blogs.sap.com/2021/06/30/leveraging-influencers-to-improve-your-predictive-forecasts-accuracy-in-sap-analytics-cloud/.