Entity Manipulation Language (EML) is a part of the ABAP language. It means that there are new syntaxes available in ABAP to 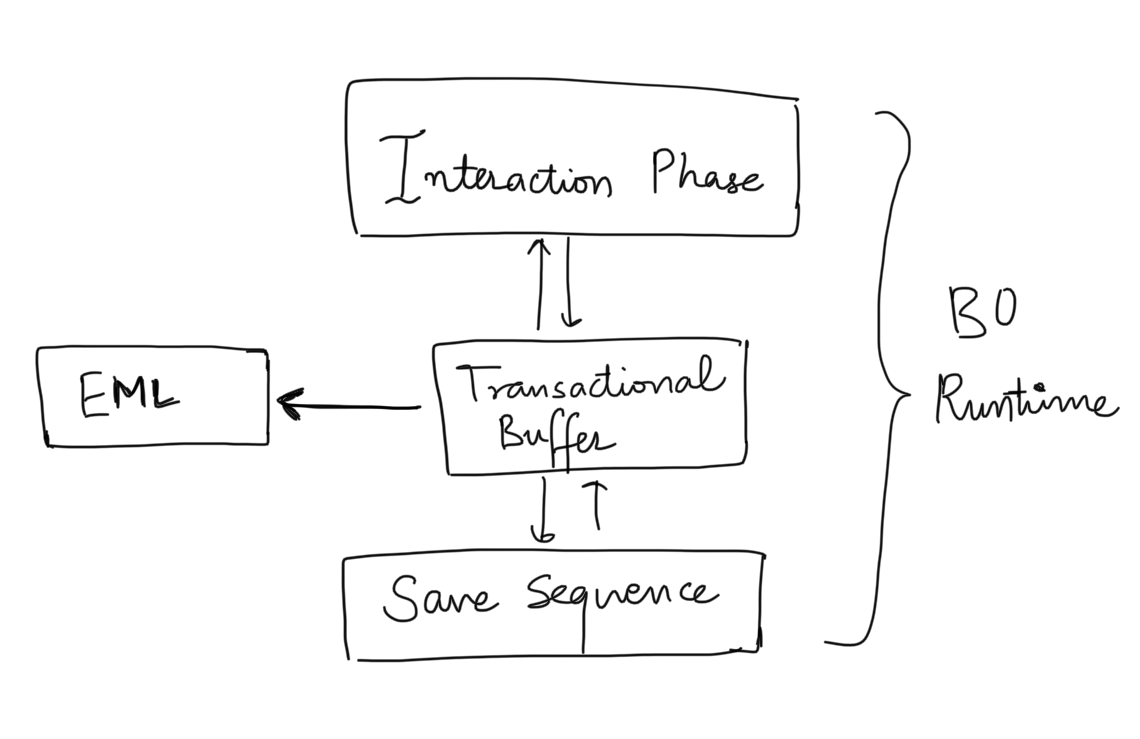 Where EML comes into the picture 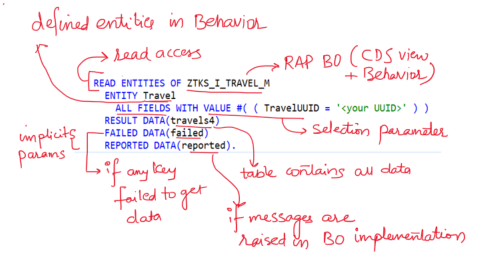 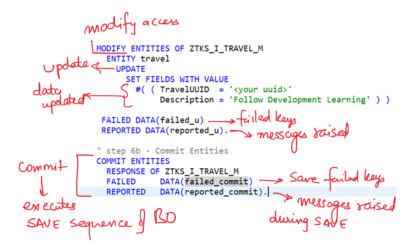 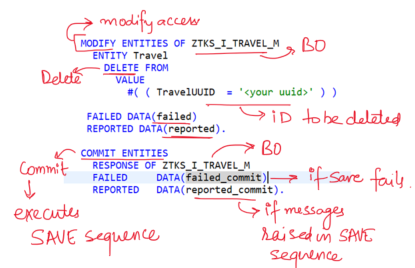 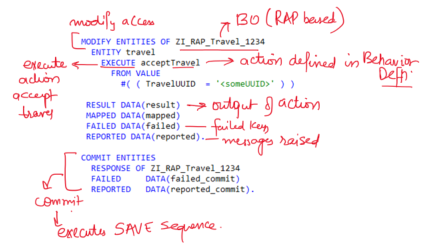 Commit Entities syntax is clubbed with Modify syntaxes to logically complete the flow. LUW concept is there in all the MODIFY syntaxes.

Where is EML used?

Usually, Business objects that are implemented with the ABAP RESTful architecture based on the behavior definition and implementation of the interaction phase and save sequence in behavior pools can be consumed by means of OData protocol (Fiori UIs, or Web APIs)

Now to access them through ABAP code EML syntax is used.

The standard API is used whenever the “target” business object is statically specified. It provides code completion and static code checks. This typed API provides statements for read-only access to data (READ ENTITIES), as well as for modifying data access (MODIFY ENTITIES) and for triggering the save sequence (COMMIT ENTITIES), these all we saw above

The generic API is typically used for generic integration of business objects into other frameworks, such as the Cloud Data Migration Cockpit or the Process Test Framework.

What is the Use Case?

One of the uses cases of EML is the writing of test modules as ABAP Unit tests. As ABAP application developer, it gives you the ability to test the transactional behavior of business objects for each relevant operation that is defined in the behavior definition.

Another use-case is cross BO integration. Executing CRUDA operation of RAP based BO in another RAP based BO’ Implementation in exits like determination, validation, actions, etc.

From which release it is available?

Kindly share your thoughts on this blog and I will continue writing blogs on RAP topic.

Hi
My question is a little out of the question. It seems to me that expanding the syntax of a language for each function instead of building a library on top of an existing language is a strange solution?

In some sense you are right, however, when there is a new Programming Model came into the picture – which includes new artefacts like we have Behavior Definition, Behavior Implementation, etc then adding new syntaxes specific to that model is I guess fine.

I can think of that there must be some limitation to build on top of existing language one. Anyways I will try to pass on this question to the relevant team and hope we get some answers to it.

I very much agree with this point. Why not take the modern approach used in, e.g., Java, Python and JS, where the core functionality is extended through libraries rather than adding new syntax to the language?

What you are talking about is something totally different. Let say in python or java, if they introduce another library then you have new syntaxes right? For example, at one point of time if string library is added then string functions like concat, etc came into the picture. Similarly, with the new programming model, we have new artefact as Behavior definition and now to manipulate BO based on RAP there is new syntax. There is no existing library which was there which can be enhanced.

I agree my choice of words could be clearer – I meant new core syntax. Other than this, I think my point is pretty clear – as you mention, Python or Java introduce new features using libraries. The core syntax of the language is the same, however. And very simple at that. There’s mainly just variables, arithmetic operations, conditionals, loops, classes, and functions/methods.

Instead, what we see here in ABAP RAP is very different. Statements like READ ENTITIES OF, FAILED, REPORTED, etc. are now part of the core syntax. The language itself has been modified. If they were instead provided through a library as they would in Java or Python, it would be something like this:

Another example would be how sin() in ABAP is a function part of the core syntax, but in Java it’s provided through the Math library. It’s not part of Java’s core syntax.

Also, if you're interested check out this video, from 9:15:

It speaks exactly about the topic at hand. More specifically, it mentions how Java is extended through libraries but the language itself has been practically unchanged since 1996 🙂

That's a very good explanation, you are right what we have in JAVA or python.

Here we can have libraries (usually we have using standard classes) but adding another artefact which simplifies user experience - If you see behavior definition, it is easy to understand what all operations are available for my Business Object.

otherwise behind the scene things are same.

I tried to build a simple development, just to update a table depending on some vendor conditions, so I included the management in a BAdI.

I had many problems at the moment of saving the data:

Workaround to save all data was implementing a new local class with data to save and a method to handle COMMIT, and from behaviour saver local class I call to this one.

This way, I can save the data at COMMIT and COMMIT ENTITIES.

The solution to write the changes if EML is called during COMMIT, is to perform DB modifications directly in the CREATE/UPDATE/DELETE methods when sy-oncom = 'P'

I think that EML needs to take a look at this.

Doing this will break the LUW, we have actions also along with basic operations and an option of Unmanaged SAVE. This will create a problem in view

Here Commit work is implicitly handled by framework and ideally BAdI’s and BAPI or any FM should not contain COMMIT WORK inside.

I think that I didn't express myself correctly.

I am not doing the COMMIT by my self, it is performed by a proxy class.

This is the call stack: 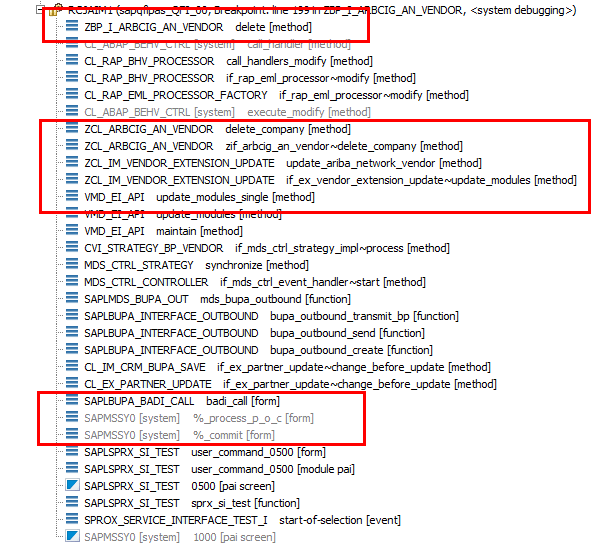 I can't execute the COMMIT ENTITIES in this situation

That's really helpful, thanks for sharing!

Thanks for the great sharing!

We are developing a prototype of the standard product, in current desgin, we want to directly provide a class with CRUD methods which developed with EML to interact with our RAP model(Managed mode), then expose this class as a API to our consumers.

In your opinion, is this kind of desgin acceptable?

Yeah, this kind of design is acceptable, it's like a wrapper. So ideally these EML syntaxes themselves work as API's but if you want to simplify the terminologies then its fine.

Just remember EML syntaxes works on KEYS, I mean you can read data only based on KEY fields, not like SQL selects.

Thank you for your comments and further reminder!

I will do exactly the same thing in my project. But apart from the specific API, we also would like to separate it for testing purposes. This way we can mock the BO results in the productive class, instead having to introduce data in DB and then test.

This way we will separate the tests: the EML entity will be tested in the RAP class.

The productive code will only takes care of the main logic, BO results will be mocked.

This is incomplete. you did not talk about the deep create, modify things. Also the main problem is not EML it's quite easy the problem is when using it in RAP implementation- what is %key and %control when to use what those documentations are lacking.