In an organisation having employees, hierarchial data is a list of employees(entities) which are related to each other. Hierarchy enables structural organisation of data with each employee linked to other employees in the hiearchical table.

Two types of hierarchy are available:

A simple parent child hierarchy represents relation between a single parent and multiple children. Source table shown below depicts the relation between employees and supervisors in a department. In this case, a single supervisor(E1) can be responsible for multiple employees(E2, E3). A hierarchial table represents the relationship between employee and supervisor in a tabular form with parent-child association. 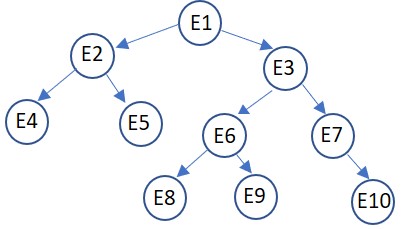 Steps to implement parent-child hierarchy from a source table

source <CDS_Source_View> ( Mandatory) on which the hierarchy is based.

The mandatory addition SOURCE specifies a CDS view as a source of the CDS hierarchy. This source must publish the hierarchy association specified after CHILD TO PARENT ASSOCIATION in its SELECT list.

CDS hierarchy <CDS_HIERARCHY>  is defined as parent child hierarchy for base view <CDS_SOURCE_VIEW>. The additions in parentheses after AS PARENT CHILD HIERARCHY definethe hierarchy creation. The self-association _Parent is exposed as child to parent association in hierarchy definition.

The optional addition MULTIPLE PARENTS specifies whether the hierarchy can have child nodes with multiple parent nodes:

This is the default setting (a child node can have precisely on parent node only).

Only leaf nodes can have multiple parent nodes.

All hierarchy nodes can have multiple parent nodes.

In next blog post, we will learn about various types of CDS hierarchies

aliza beth649
November 23, 2020 at 9:43 am
Hierarchies help businesses to analyze their data in a tree structure through different layers with drilldown capability. … ABAP Core Data Services – Part 1 (ABAP CDS Entities). … ABAP CDS Development Guide … Hi Tushar, It’s great you are trying to do a consolidated blog series for beginners on this …

Hi Aliza,
I've removed a link that you had added to your comment. Please review our SAP Community rules of engagement: https://community.sap.com/resources/rules-of-engagement

Hi Harish! Thanks for sharing. I wish there was a more clear explanation of the context in which hierarchies would be used. I think everyone understands what a hierarchy is but, to be honest, just from reading this blog, I didn't quite get why this is needed in CDS view context and what it's for exactly.

There is an older blog that I found in Google that I think explains this better: https://blogs.sap.com/2016/11/25/hierarchies-in-cds-views/

Here, the idea was to inform specifically about CDS hierarchies in ABAP.

I will link the blog you sent for more information.

Thank you for the blog.

I have a requirement where I need the hierarchical CDS view by Sales org , division and distribution channel.  May I know how can we build the hierarchy with different fields. I  found the examples only with recursive, but not individual.

Can you please give some suggestions?

Thanks for sharing the valuable info.

Can you please let me know from which release and SP onwards this CDS hierarchy feature is supported?,