In Praise of Old Tractors

A fancy new tractor costs more than my house. That’s why I’m happy to live with our two, almost 50 year old, International Harvester (IH) tractors, models 474 and 484, gas and diesel respectively.  They aren’t always working at the same time, but one powers the heavier equipment like the mower/conditioner and the other powers the baler and various lighter equipment. To my husband’s delight, both are eminently fixable, unlike the new computerized models whose manufacturer-controlled maintenance options are leading to proposals for right-to-repair laws in many states.

International Harvester isn’t around anymore. It was bought by Case in the 80s. Case merged with New Holland in the 90s. The three farm equipment manufacturers are now combined into CNH Industrial, whose North American headquarters is still in New Holland, PA, not far from my house.

Given this history, I was touched last week to see a special New Holland section in Lancaster Farming, my local agriculture newspaper, in honor of New Holland’s 125th anniversary. New Holland is widely respected as a Lancaster county company that really made good and stays true to its roots (pun intended). They are well known for providing equipment especially suited to specific farming tasks, with knowledge gained from local farmers. As one company historian reports, back in the day: “If you wanted your hay baled, you could call New Holland. They’d bring their crew out, and they’d bale for you. But when they were baling, they were testing their balers. They’d break down, a crew would come out and look at what broke.” And then design a better version.

Pennsylvania is home to many small farms, where tractors are more important than cars. You can pick up a pizza in your tractor, as some of my neighbors do, but you can’t plow a field with your car. We rely on our tractors to plow and plant hay fields; cut, ted and bale hay (tedding a field is turning the hay over so it dries before baling); haul wagons; mow pastures; dig out barns and move manure; plow barn lanes when it snows; and haul heavy things around, like pieces of large trees that recent storms brought down (picture below). 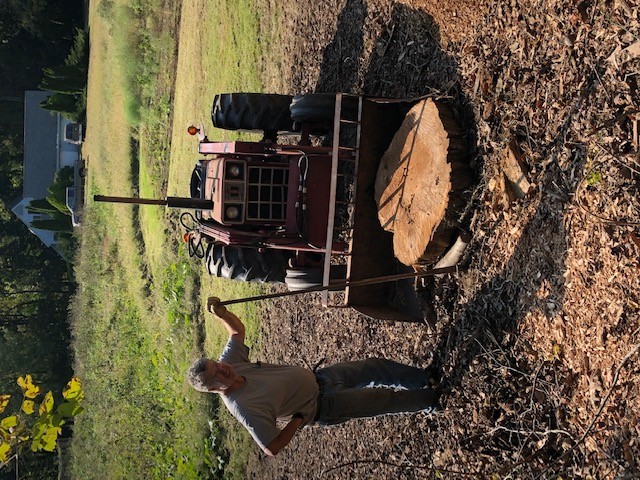 Bottom line… we can’t live without these tractors. They are not the tractors that support sexy precision farming applications, like the new generation equipment. They are, instead, what supports day to day work on many farms – the equipment that gets fixed and rebuilt over and over because it’s cheaper than buying new. It matters immensely that these tractors are well made and that parts are readily available.

With farm revenue being propped up by government subsidies and a record number of farmers going bankrupt, getting the most out of existing equipment is vitally important. We do that with the help of a New Holland based Case IH dealer, Hoober, whose field service is just as good as in the old New Holland days. The field technician, just recently retired, who has fixed our tractors for years delivered them to the original owner 50 years ago. He knew our equipment better than we do.

We can only hope that if and when these tractors finally bite the dust, we can buy equivalently sturdy and long-lived equipment. I’m happy to say that SAP may play some part in fulfilling my hopes. Quality equipment and service doesn’t happen without the support of software, and SAP has a significant base of agribusiness customers. Our customers include most of the weed/feed/seed companies like Bayer, Corteva, and ChemChina/Syngenta, the big grain traders like Cargill, fertilizer companies like Nutrien, farm co-ops like CHS, and, more relevant to the topic of this blog, agricultural equipment manufacturers like John Deere. A number of ag equipment manufacturers use SAP software to manage manufacturing, quality management, and service parts management, to engage with their customers, and, in some cases, even to manage the field repair contractors who show up to fix equipment when it breaks down. If this software does its job, I stand a good job of getting a good new tractor — that is, whenever I can afford one. I’d be interested to hear from others of you who find that SAP software helps make your lives better, in farming or otherwise.