In this blog post you will get a first introduction in the new Cloud Studio of SAP Intelligent RPA 2.0 and learn how to start with the automation of SAP GUI screens.

Create a new project in the Cloud Factory

With SAP Intelligent RPA 2.0 we start bot building directly in the cloud. The new environment is fully browser enabled. First step after the log on to the Cloud Factory is the creation of a Project:

To create a project click on the ‘New Project’ button in the upper right corner. Insert project name and description into the fields of the pop-up and click on create.

The click on save creates the project and redirect you to the Cloud Studio, the new design environment. 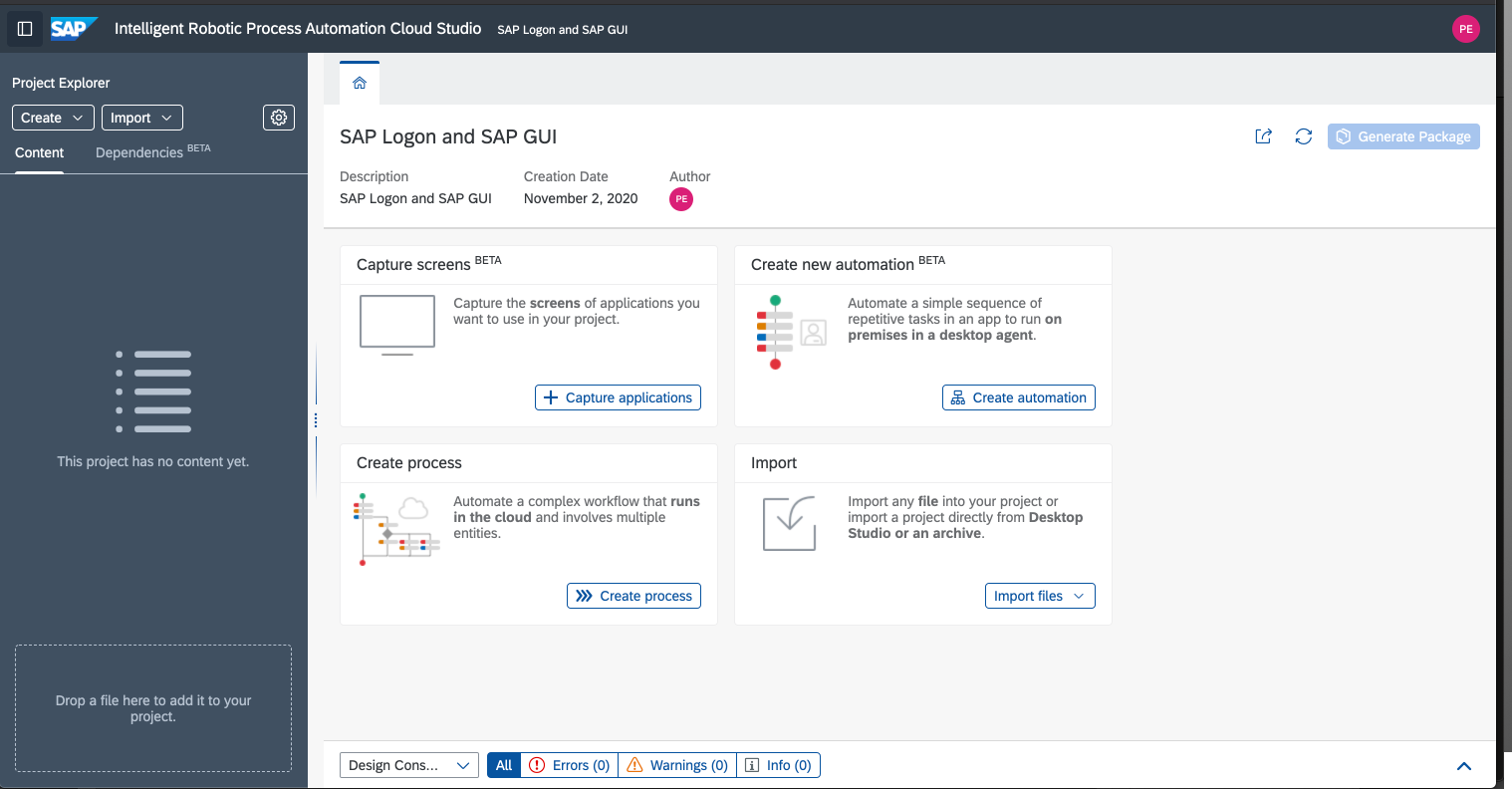 First we will start with capturing the screens. Therefor click on ‘+ Capture application’ to start the process. on the left side of the next screen you can see a list with the available screens. 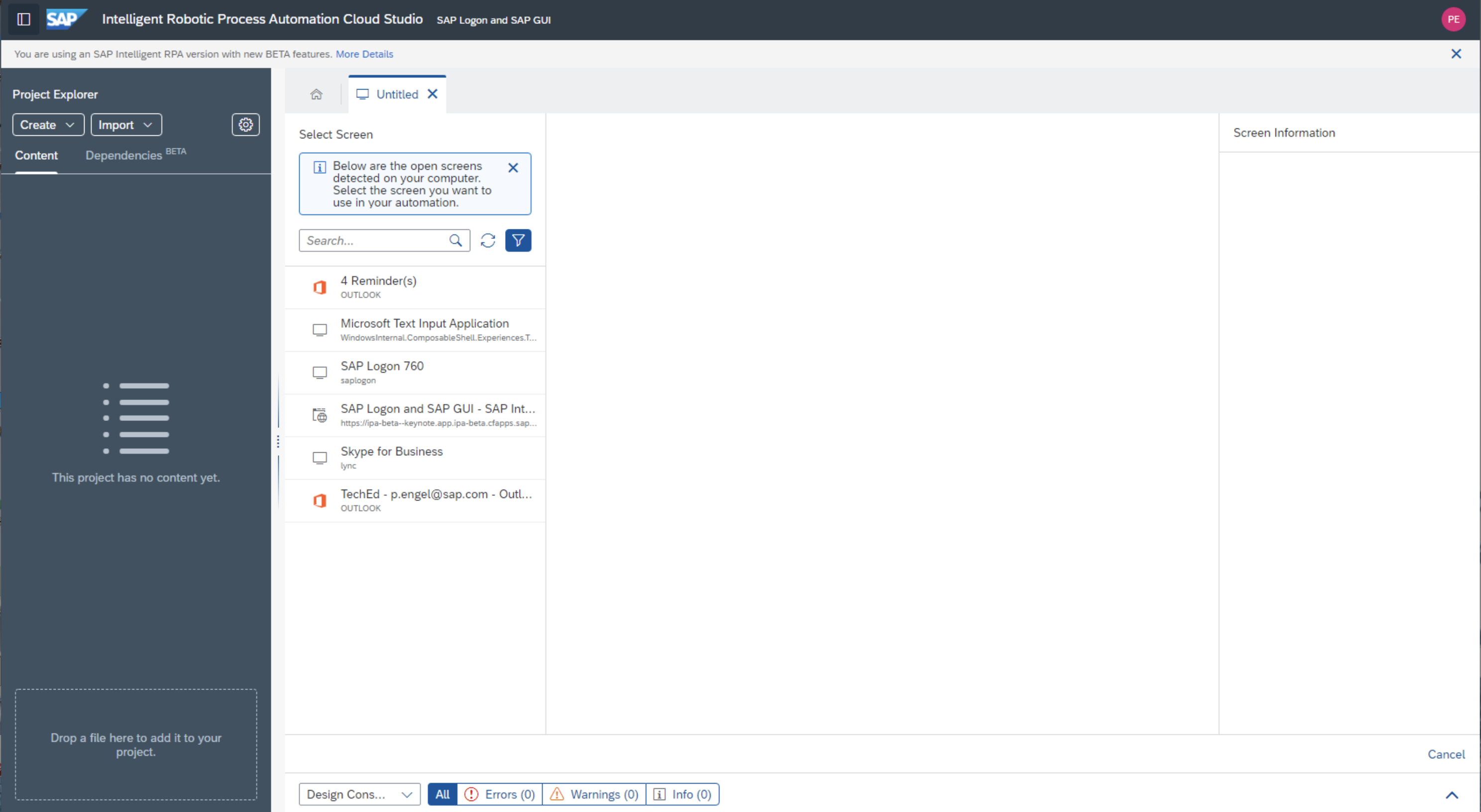 Capturing and Declaration of the SAP Logon Pad

Click on ‘SAP Logon 760’ and the SAP Logon Pad appears. 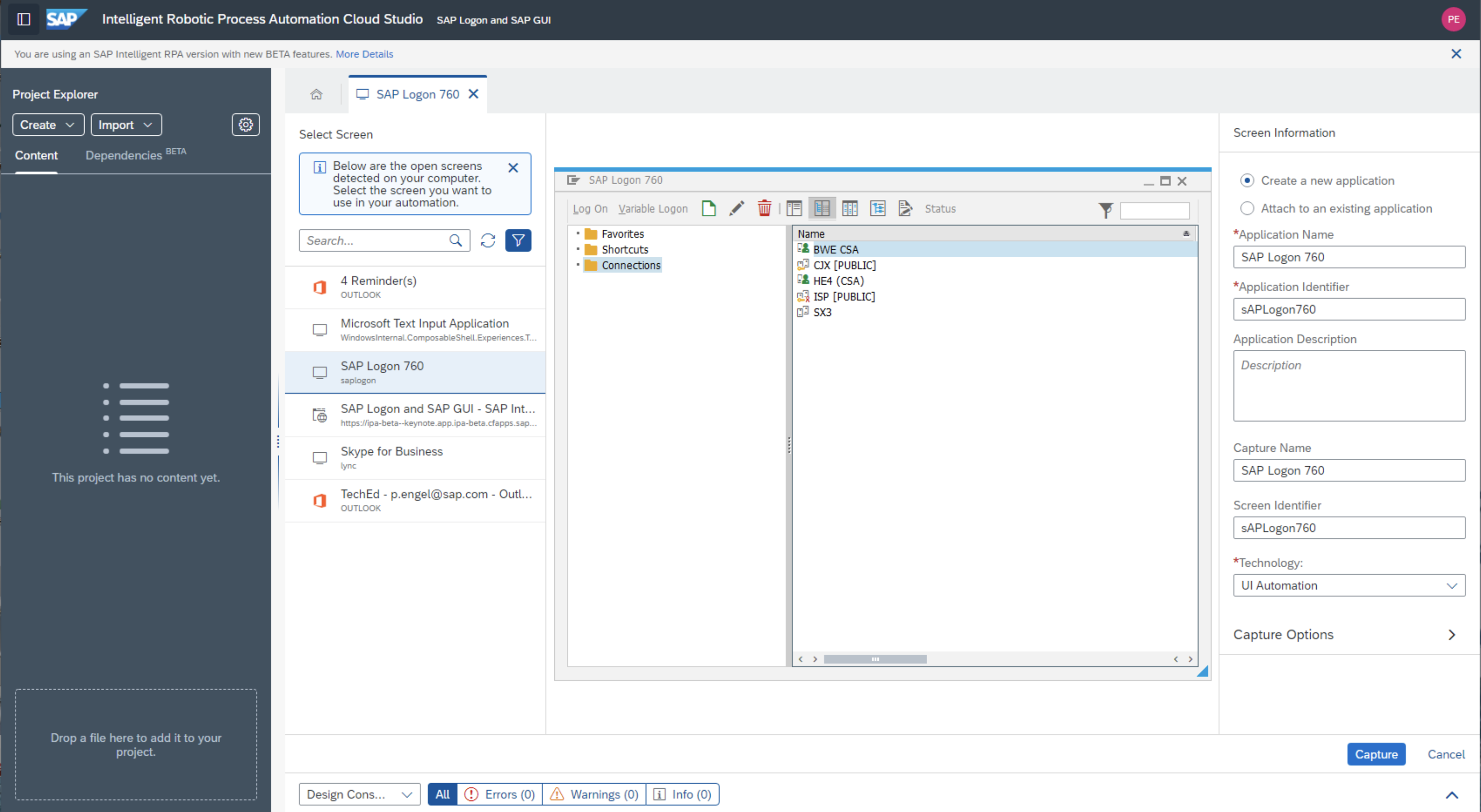 Click on ‘Capture’ in the left lower corner to start capturing the screen. The screen will be captured and you can immediately declare items on the screen. Click on the system and declare the element. No additional action needed. Then do the same with the ‘Log on’ button and save the results. 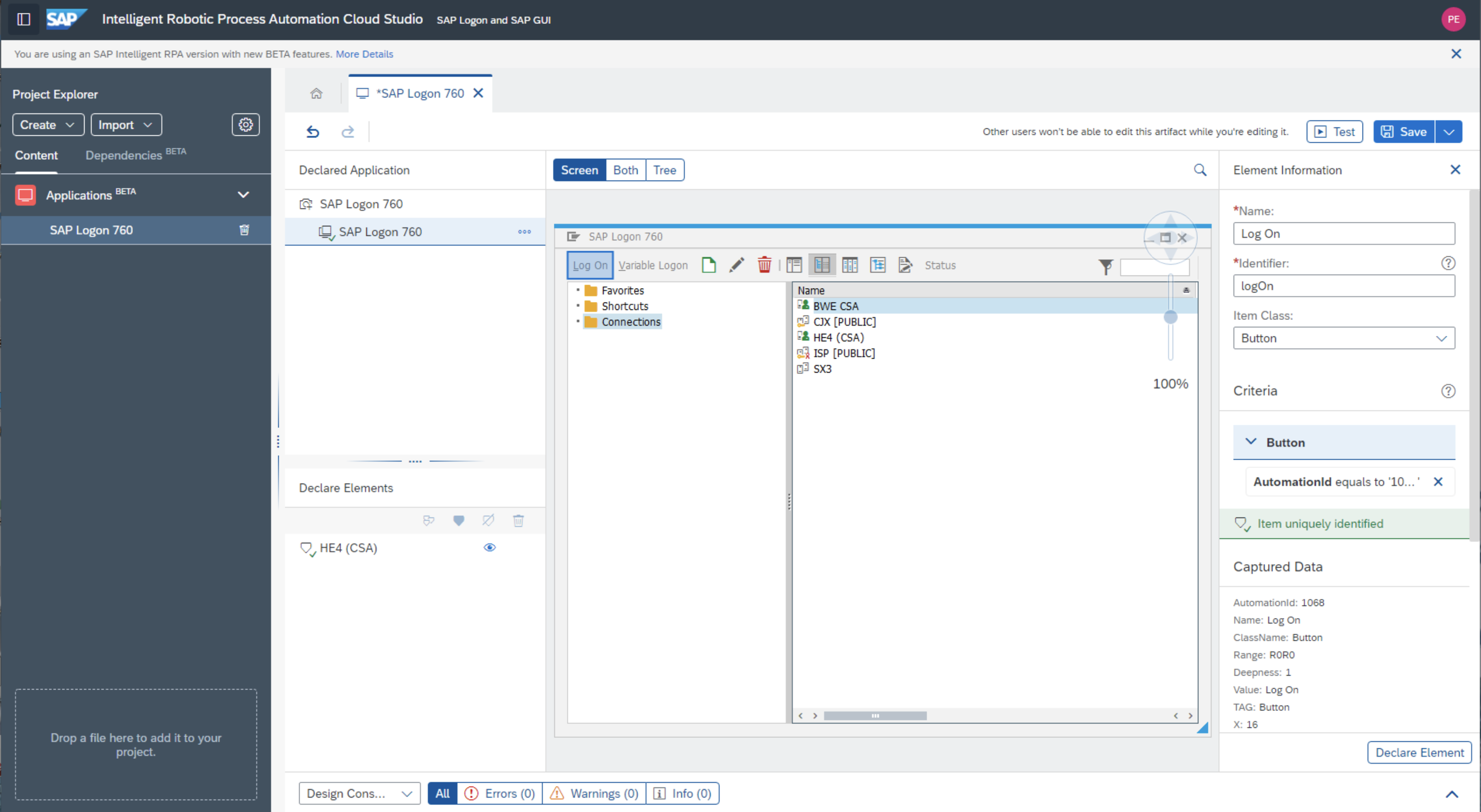 In comparison to the Desktop Studio you need less clicks to achieve the same result in the Cloud Studio. You do not need to know which technology to use or which criteria are the right ones. The new Cloud Studio does it for you!

Capturing and Declaration of the SAP GUI

Now you have to capture the SAP logon screen to enter user name and password. Therefore click on the three dots behind the application name and choose ‘Add Screen’

Select SAP Logon and click on capture to start the process. Same here you have not to select a technology to capture the page, the Cloud studio selects the technology automatically. 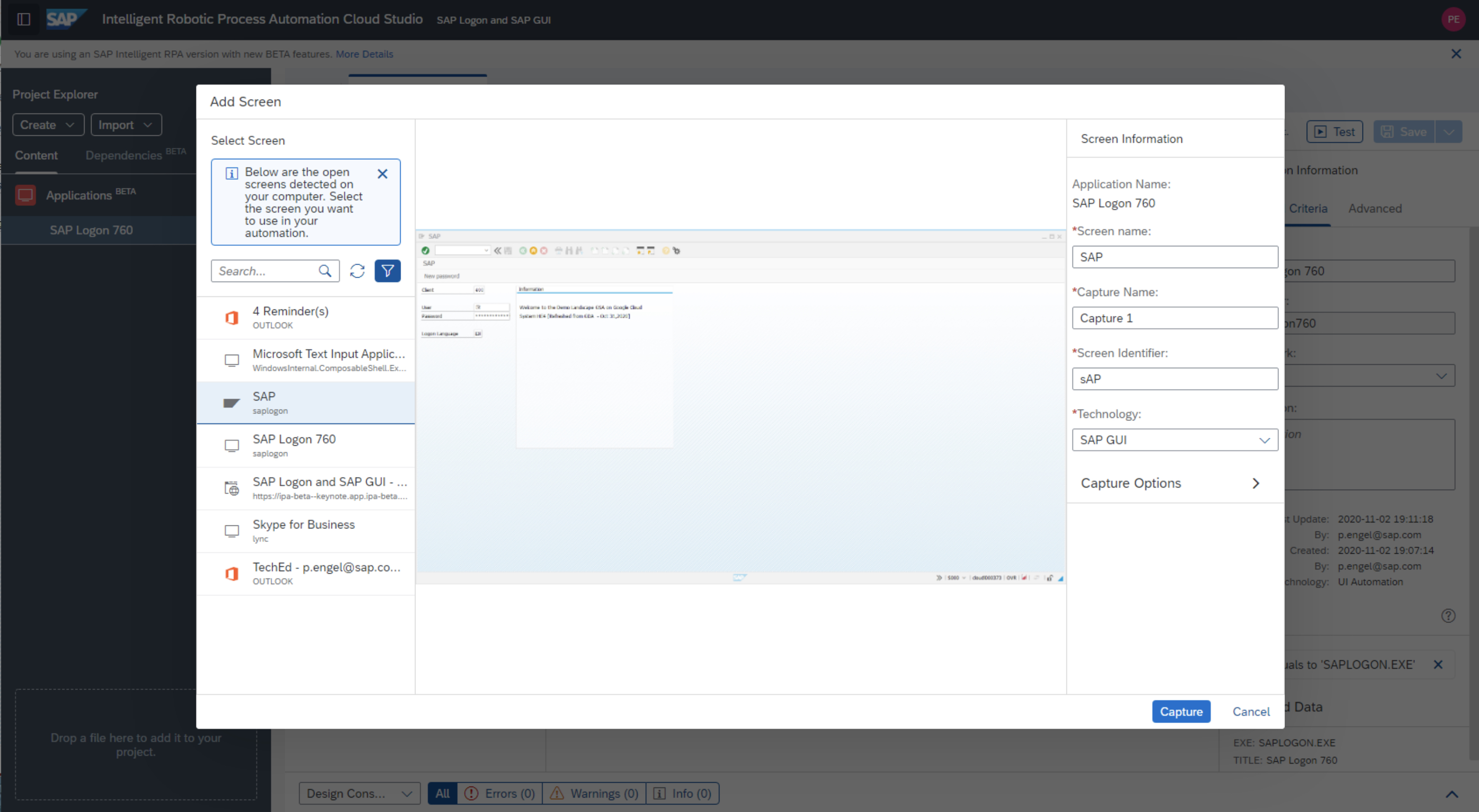 After capturing the page you declare the fields User, Password and the Enter button by activating the items and clicking on declare.  Don’t forget to save the results. 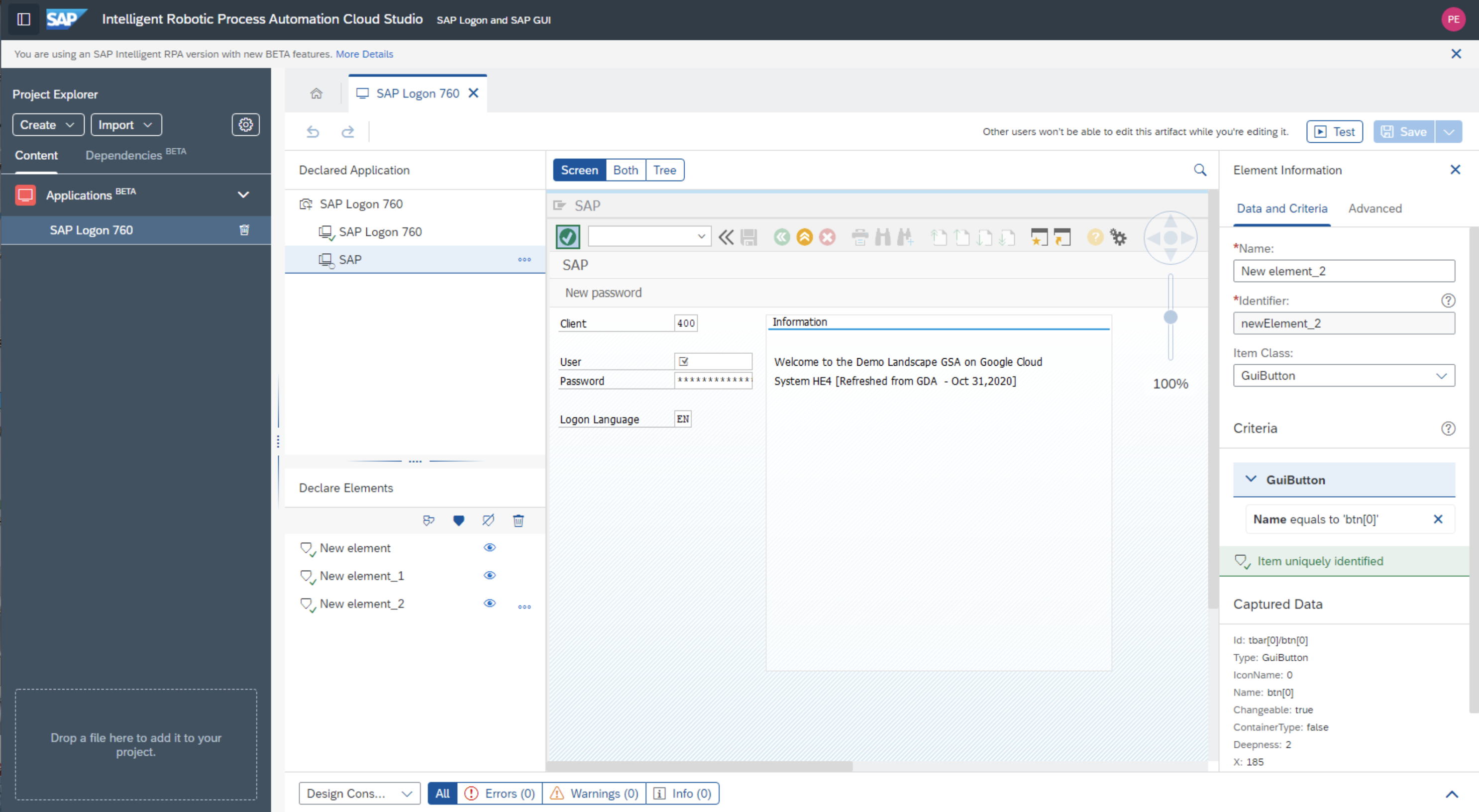 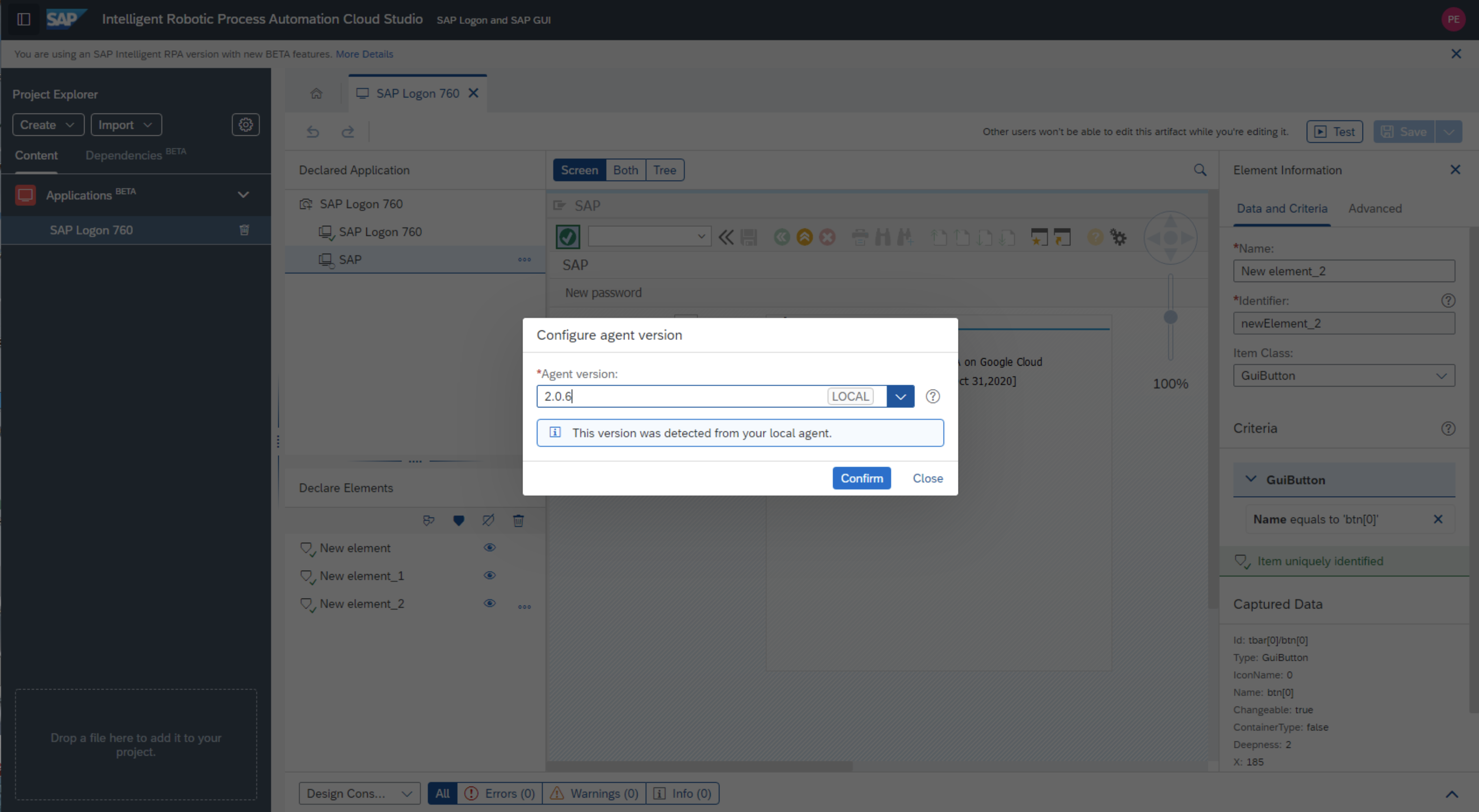 Click on ‘Confirm’ to move to the next pop-up to create the automation. Here you enter the Name and the Description of the automation. The Identifier will be generated automatically, but you can edit the ID. 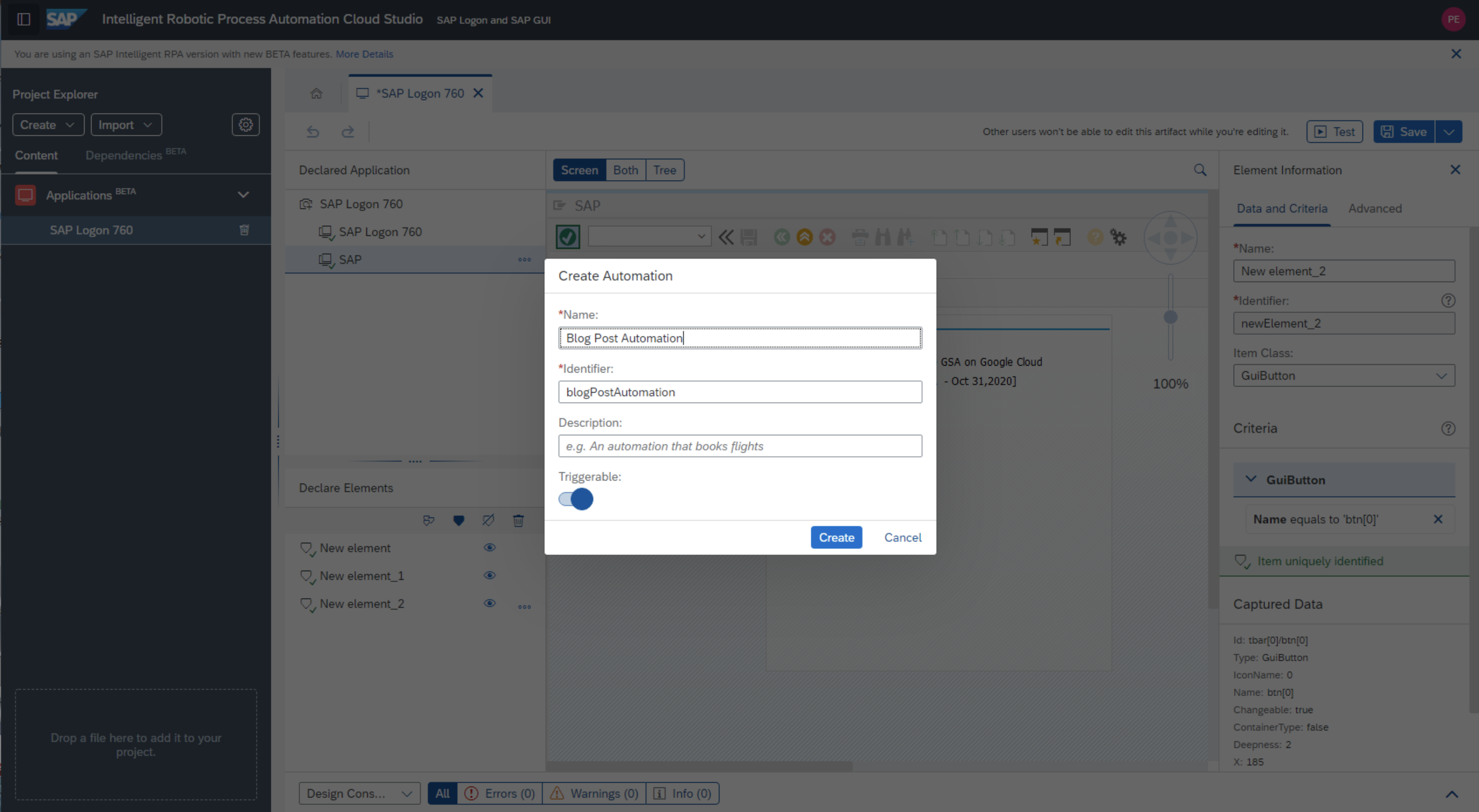 On the next screen you see the automation designer with the following features: 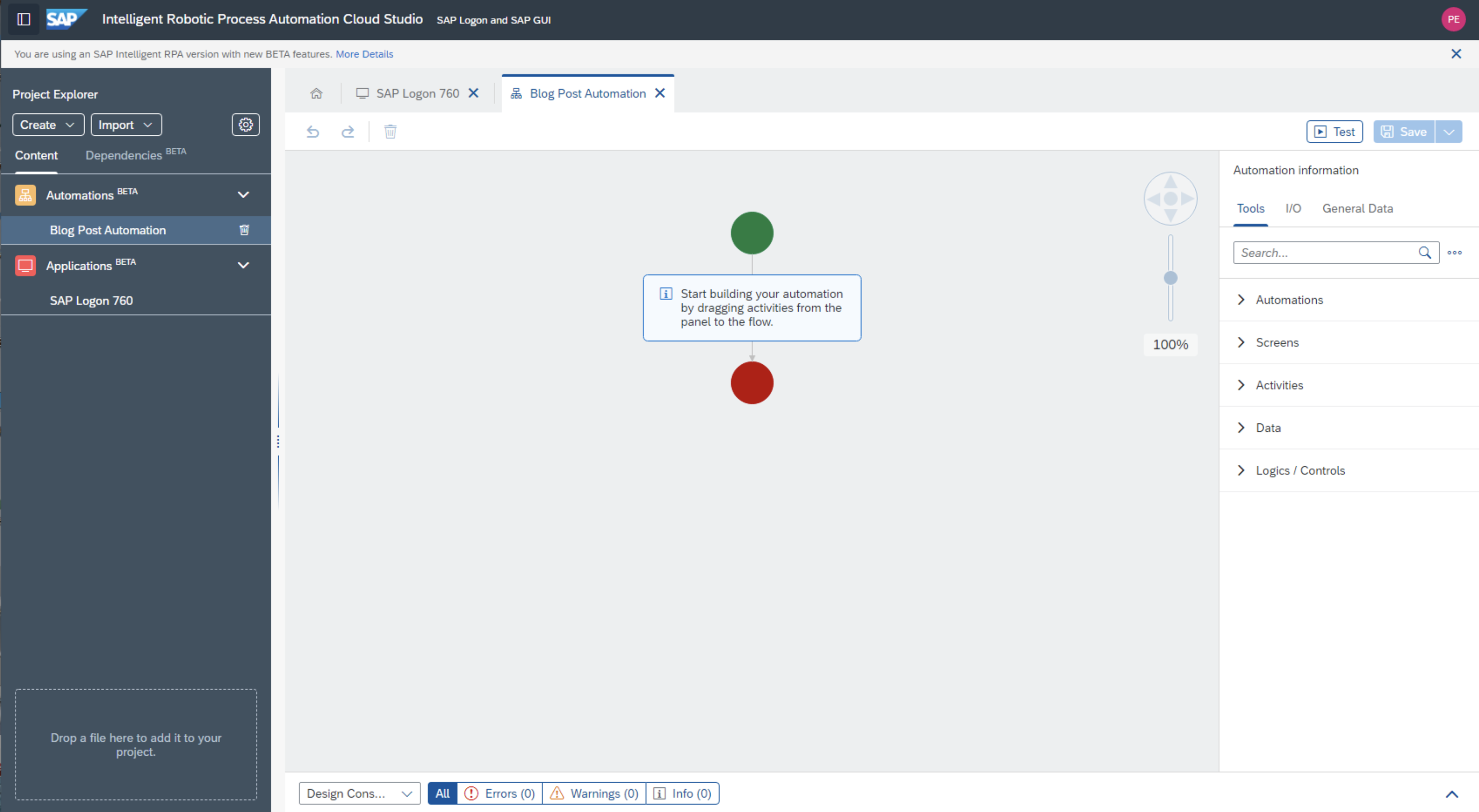 To build your automation you use the captured screens and the related activities. The final automation should look like this example: 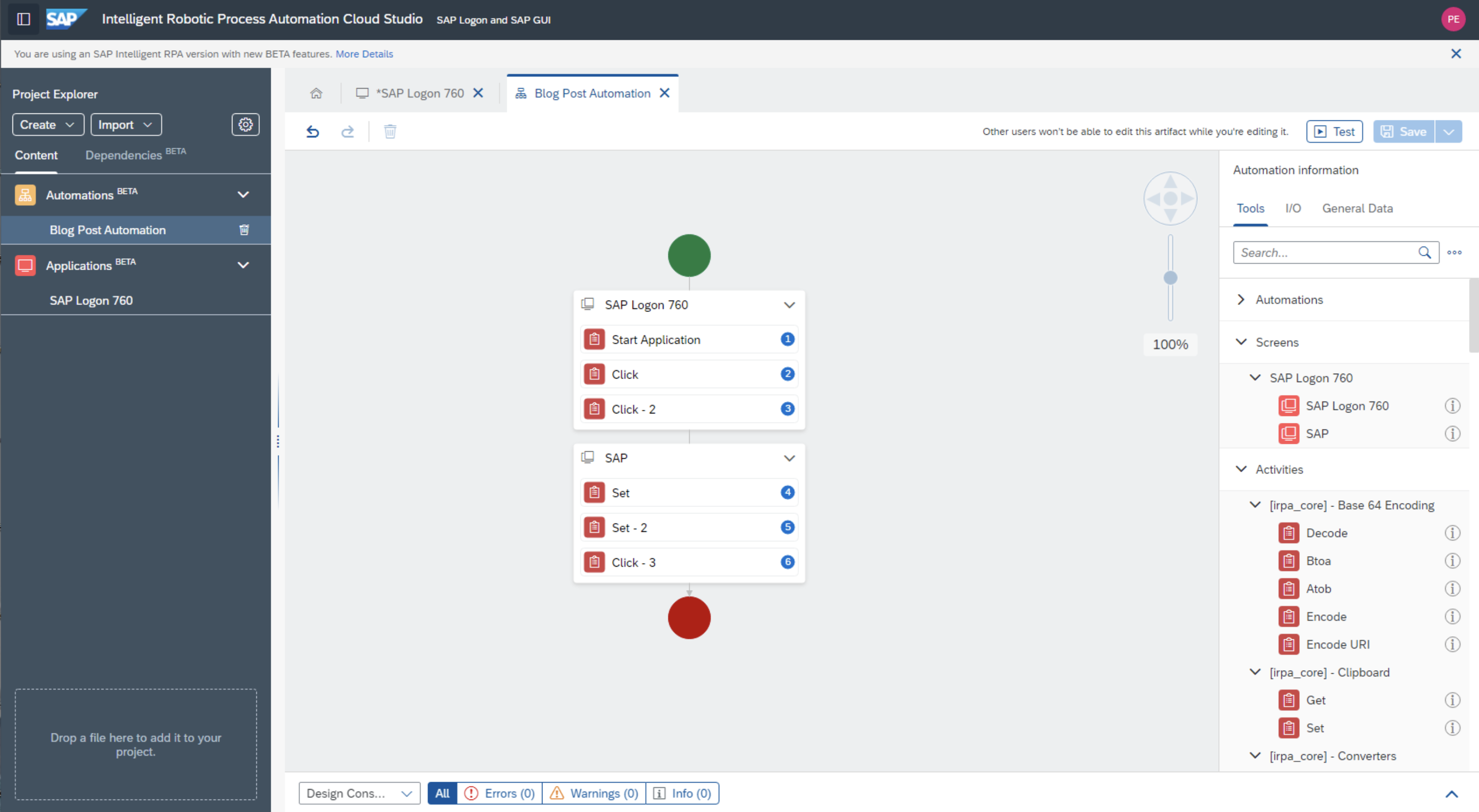 To learn how to use the screens and activities view this video:

Now you are able to build an automation with SAP Intelligent RPA 2.0 which is using the SAP Logon Pad and the SAP logon screen to get access to a SAP system. You learned that the new Cloud Studio is more intuitiv and supports you with additional functions to make your daily work easier.

Hi Peter Engel - Thanks for the detailed explanation. The best thing for me is that the technology is auto detected while capturing the screens. Really eager to try it out ....

you can touch it beginning of December.

yes the Cloud Studio is a new component targeting the Citizen Developer but also has all functions for a developer. The Desktop Studio will still supported for the next time. you will get  more details during TechEd.

Eagerly waiting for TechEd to see the new iRPA 2.0 and cloud studio. How do I get that in trial version?

How do it get the Desktop Agent 2.0.6 download, so that I can use IRPA 2.0?  I do now see it when I go to Software Downloads - Intelligent Robotic Process Automation.  In fact I see nothing...

You can find it in the below link. Scroll to the bottom of the page for Desktop components trial versions.

The UI and the use of blocks for the elements makes me think of Scratch. 🙂

I cannot get the Cloud Studio to recognise any of the fields in the SAP Logon screen. Regardless of what I do, it won’t recognise the QuiOkCOdeField, Client, User or password fields.

Not sure if it is still a requirement, but did you enable scripting on the client and server side.

Please activate scripting on server and client side as Werner mentioned in his comment.

Scripting is already enabled on both sides.

I must have added the screen as a sub page rather than a new screen, i.e., Add Capture to Current Screen, rather than Add Screen. All is working now.

I have this all working perfectly, which is great.

How do I capture the dropdown box in the Cloud Studio?

unfortunately this is not possible with this release. We are working on a solution for capture on hover. As an alternative you could use SE16. This should work.

That is really surprising.  I think we will just keep using the Desktop Studio until the Cloud Studio is more mature.

Thanks for your guides.

But I have a question. When I try to capturing the page SAP GUI asking me an access to the scripts.

Why is this happening?

in the settings of the SAP Logon pad where you also activated the SAP script on client side is an option to deactivate this pop-up.

Thank you for fast answer. Your advice helped me.Now my automation works correctly.

Hi Peter, i have a problem. When i try to capture the logon screen, some advertisingtells me that there is an error capturing this window as it is sap gui. what could be happening?

is SAP Scripting enabled on client and server?

Yes, Scripting is available on my SAPLogon

But when ui choose the screen, i can't watch the preview, neither take the capture 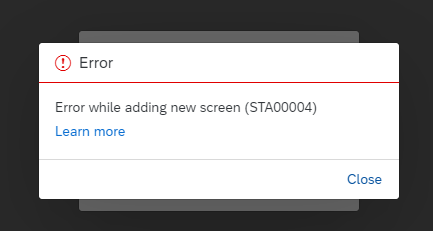 Hi Peter, I have a problem.

After capturing the item from a screen in SAP GUI, the application test does not recognize me the  item and it is also not recognized when running the automation. I have tried several Captured Data options and it did not work for me.
Thank you in advance!

The area enclosed in blue refers to the "Tabla" element.

I am facing the following issue.

The reason of this, is that the capturing only sees it as a pane and not different elements.

Can someone help me?

is SAP scripting enabled? Both on server and client side?

Do you use Cloud Studio? If not please move to Cloud Studio and use the recorder to capture the screen.

Also you can check the store. All bots with publisher SAP Intelligent RPA will have a log on procedure at the beginning. There you can see how it should look like and what are potential differences.

thx for your response.

scripting is enabled on server side but I don't know how to check it on client side.

Im using cloud studio and I also tried it wit record to capture.

Also check if you are on the latest Desktop Agent version.

The problem is, is that it is not only with sap but it does the same when im trying to do a screen capture from a website or fiori launchpad ect.

What’s the version of your desktop agent and of the browser add-in?

I have updatet my desktop agent to the newest version and it still does not work. Should I try a lower version Peter Engel ?

I followed you now. Please send me a private message, so we can have a direct conversation on this topic.