Why are scalar UDFs so slow?

When loading data from source systems, there are requirements in SAP BW that are often repeated at the field level. This includes, above all, logic for cleaning up and processing the data, such as:

The following listing shows a few examples in the source code:

Typical expressions in the field list of a transformation routine

What all these requirements have in common is that they

The well-known DRY principle should actually come into play here. So that you don’t repeat the source code all the time. In the field list, the scalar, user-defined functions (UDF) are available for this purpose. Until recently, these were not available for the transformation routines in the BW, because they can only be created with the AMDP Framework since AS ABAP Release 753 . But scalar UDFs would be ideal for precisely these requirements. This ensures a uniform implementation. And in the source code you can move from a technical description of the expressions to a business view:

Outsourcing the expressions to a scalar UDF

The outsourced functions look much more elegant. And they are also superior from the point of view of maintenance. For example, if another profit center appears in the list, there is exactly one function that needs to be adjusted. Using the example of ZCL_PROFCT=>TO_PRBY I show such a scalar AMDP function:

The example shows that the function is just a simple wrapper for a CASE expression. By the way, outsourcing to the ABAP world also makes it easy to write UnitTests for the functions. Since the functions in the database are only generated from the ABAP on the first call, UnitTests are also suitable for generating them.

As elegant as the outsourcing of logic in UDFs is, the concept is unfortunately not to be used for large amounts of data. This is because the UDFs have a significant influence on the runtime. I would like to show this in another expression from the example above:

This simple expression converts an ABAP DATS value into a SQLScript date, which is then output to a YYYYMM string. This corresponds to the format of the popular InfoObject CALMONTH.

For this purpose, I create an AMDP UDF according to the above pattern:

I made two queries in the SQL console on a small BW table with about 3 million entries: one directly with the expression and one with the function call.

The runtime is so different that you actually have to assume a bug. Because the complexity of the example is minimal. With less complexity, I don’t need UDF anymore. What I find amazing:

In order to fully document the whole thing, I also did the analysis with PlanViz. 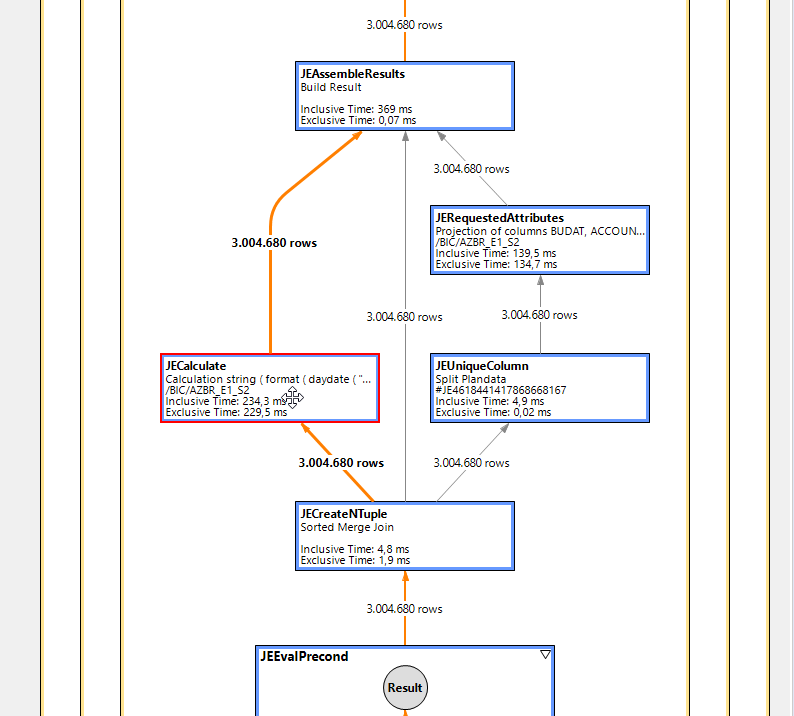 Planviz of the Query without UDF 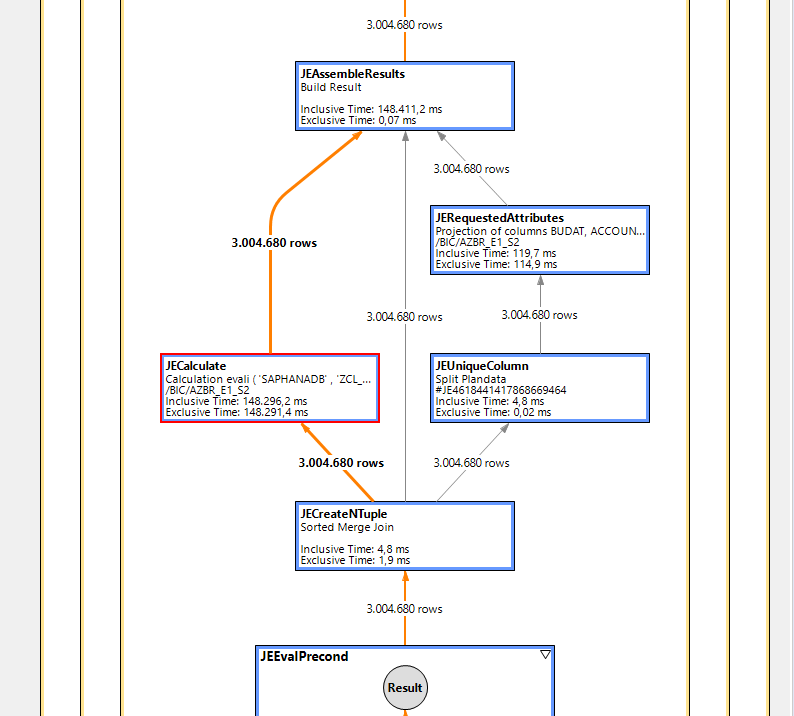 PlanViz of the Query with UDF

It is clearly visible that, by and large, the same implementation plan is chosen. But the runtime of the one, red-marked JECalculate node contains the entire runtime for the UDF call. This should at least be parallelized.

I also stumbled across the HINTS. The HINT (INLINE) is supposed to trigger exactly the desired behavior: Optimization should be done globally. But unfortunately there is nothing in the documentation about functions. Everything refers to procedures. And that corresponds to my observation: the hint brings absolutely no change. It remains slow.

Why is that? Do I have a misconception in my example? Can I still optimize this? Or are the UDFs just so slow. While researching forums, I have seen that I am not alone with my problems. There are also several ways to slow down the system with unfavorable UDFs. Some examples from answers.sap.com:

In any case, there is still great potential. At least for simple expressions without querying other DB tables.
I know that there are also complex requirements that cannot be reduced to a single expression. But then at least parallel processing would be desirable.

I got some ideas about the slowness of the presented UDF and I am really eager to see what the SAP HANA experts and developers have to say about this.

Alright, as nobody seemed to feel the urge to look into this and post anything here, I decided to write up my findings.

You can find them here: Why are your scalar UDFs slow? (mine aren’t)

As the title of my post indicates: scalar UDFs don't have to be slow.

Hope that helps and maybe there will be some official documentation/explanation about the performance of UDFs and the scenarios where they should/shouldn't be used.

thank you for your article. What version of SAP HANA are you using?

I have experimented a bit. Some things from your article I can reproduce, especially that DETERMINISTIC is not good for the performance.
Other things behave differently on my system. In particular, the performance of UDFs is still worse than the direct integration of logic. You can find details in the german version of the article on my website. An english translation and an update on the SCN will follow later.

The thing is, SAP does not provide documentation about what one can expect from the optimizer in which scenario. It's not even clear, what specific limitations or features the different optimisation steps provide and what conditions enable/disable which plan transformations.

The current openSAP course does nothing to improve on that - so all one can do is to look closely at the plans generated on the specific version you're using.

From what I can see in your blog post, the plan still involves the evali() call - which, as I understand it, basically means "handover to  SQL Script processing" with all that comes with it (including memory usage).

With my HXE system the plan switched to actually have the SQL expressions executed as if these were part of the SELECT statement itself.

Anyhow, without a clear idea of what to expect from the optimizer(s) all performance-oriented SQL development is guess, try, and error.

UDF is defined on HANA using SQLscript. You are using ABAP function.

This is an AMDP, an ABAP Managed Database Procedure.

Look at this detail in the method implementation:

This means: The ABAP System will create a database function (UDF) with the source code that I enter in the method. And this UDF can then be called by an other database procedure.