Digital assistants in an ideal world talk any language, the user’s language.

This blog post sketches how multilingual chatbots can easily be built with SAP Conversational AI (CAI) and SAP Translation Hub.

SAP Conversational AI is an end-to-end chatbot-building platform allowing users to train, build, connect and monitor chatbots in a single interface. Chatbots are helping end-users to be redirected to the right content, answer FAQs, and execute routine tasks.
Creating an account on the platform is free.

Including low-code connections with other SAP solutions and easy-to-use UI, chatbots built with SAP Conversational AI are multilingual, meaning they understand several languages.
The languages differ with respect to capabilities that CAI provides: basic, standard and advanced levels (see details in the user guide).

However, building and maintaining each language in the bots can be a challenging team effort.

How to overcome this challenge

To overcome this challenge, SAP Cloud Platform Product Success, SAP Conversational AI, and SAP Language Experience Lab, organized an internal virtual hackathon with the participation of two line of businesses (SAP Customer Success/LCX, and S/4HANA). The idea is to hack a solution which enables the creation of multilingual bots in SAP CAI via SAP’s Machine Translation (MT).

SAP HackAI are rapid prototyping hackathon events, organized internally at SAP, and externally to customers and partners, to help drive early stage inspiration, use case exploration and technology discovery.
Participants learn how to leverage SAP AI/ML applications and technologies (such as SAP AI Business Services, SAP Conversational AI, and SAP Intelligent RPA), to create new use-cases, resolve business challenges, and showcase them by prototypes.
During the events, we take a real-life business scenario challenge, and we use the solution to solve it over two to five days, depending on the complexity of the use case. There are presentations, hands-on exercises and expert trainers who helps. It’s a creative working environment that helps to brainstorm and find innovative solutions.

The purpose of this internal virtual hackathon was to build a prototype that enables monolingual SAP CAI chatbots to become multilingual bots by performing on-fly translation of a chatbot conversation from/to many languages, powered by SAP Translation Hub.

After a brainstorming and exchange about different solutions architecture and process flow, we came to a solution of building a chatbot, that we call it Machine Translation chatbot (MT chatbot), that behaves as an orchestrator with the different components to perform the process flow during the runtime.

A custom middleware application/extension was built in SAP Cloud Platform to connect, interact and perform pre-processing and post-processing tasks between the MT chatbot, and Service Ticket Intelligence and SAP Translation Hub.

Set up the translation part

The process was implemented via a mini app/middleware on the SAP Cloud Platform.

The middleware app is a Flask web application which transforms the requests/responses between CAI and STH or STI services. The app is deployed in the same subaccount as the services and authenticates via service bindings. Alternatively, a set of service keys can be used for authentication.

There are 3 endpoints in the app:

The MT chatbot acts as an entry point. The user input will be stored into a variable and a direct forward will lead to the language detection skill.

The detection skill gets the text stored in user_input to classify the language:

The response will again be stored into a variable (we call it ”user_language“) and we directly move to the translation skill. This skill is available to translate the user input into the chatbots language: 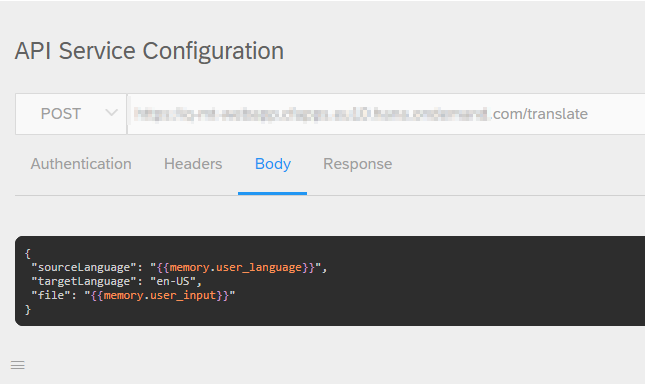 Having that in place, we forward the response (the translated text) to the desired LOB chatbot. 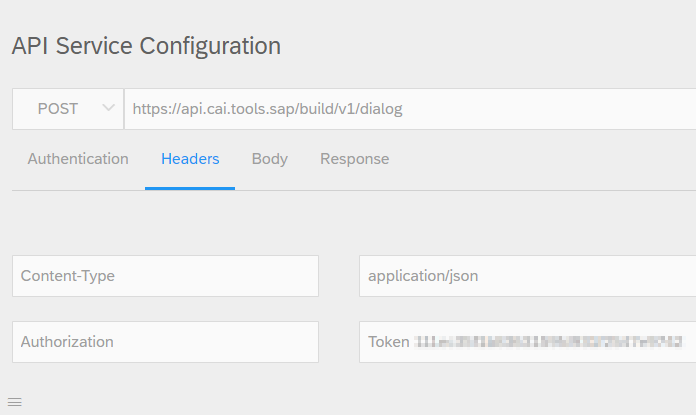 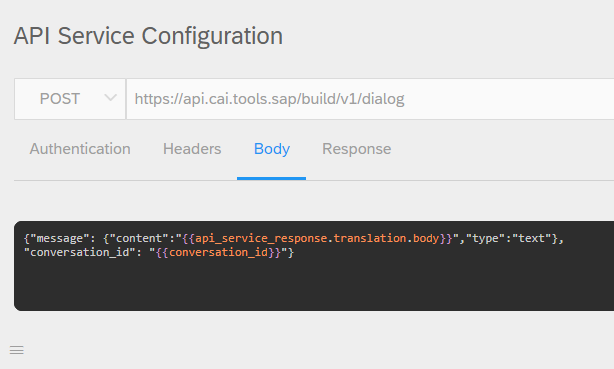 The reply of above LOB chatbot will be re-translated by sending the API response again to the MT chatbot, which finally displays the output provided by the LOB chatbot in the language entered by the user: An example is given below. The chatbot processes the input query “How long does it take to create a service report?” in English, French and Arabic.

Using Machine Translation the team was able to establish a chatbot which detects the language input, processes the queries in a language the bot understands and replies back in the user language.
Thank you Akram Njeh, Beatrice Pasch, Christian Lieske, Benjamin Graf, Timothy Janssen, Pablo Roisman, Minh Thu Le, Nora Spoo, Felix Sauerzapf, Marcel Jacobs, Fathya Zemmouri, Vaclav Nemcik and Michal Kopulety for being part of this journey. It was a pleasure working with you on this challenge.

Amazing achievement! Congrats to all the team. Looking forward to more 🙂