Predictive Planning – How to keep a private version after publishing predictive forecasts? 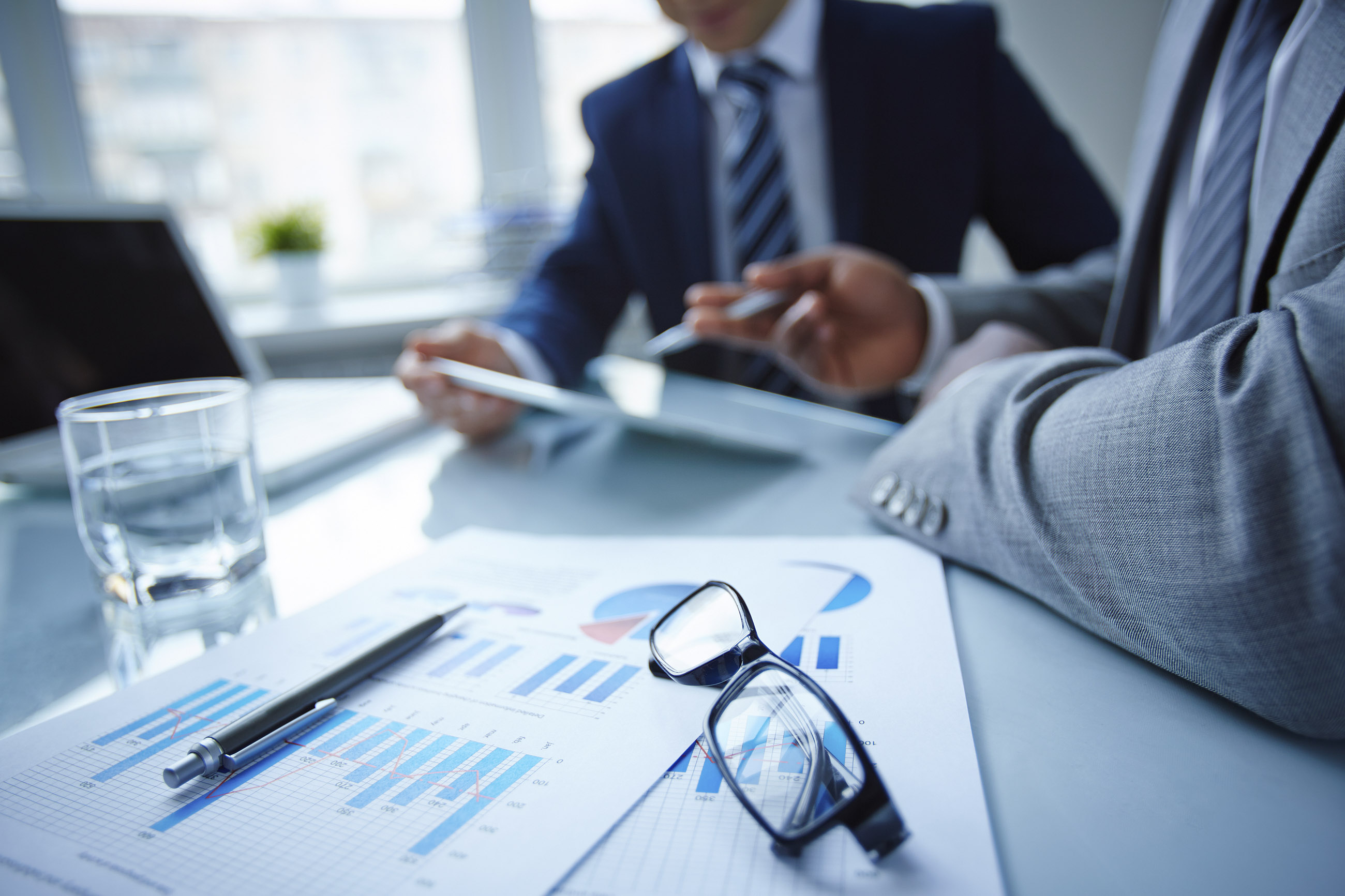 Fig 1: Workaround to keep the private version used by the Predictive Scenario

Let see an example of how this works. This video shows the example in action.

The use case is about forecasting car sales in European countries by car brands. The planner has historical data since 2015, and the objective is to forecast sales in 2020 by country and brand. The screenshot below shows a story on the planning model. You can see here the “Actual” version of the data, but in general, the planner won’t work directly on this version. Instead they will work on a copy called here “Forecast”. 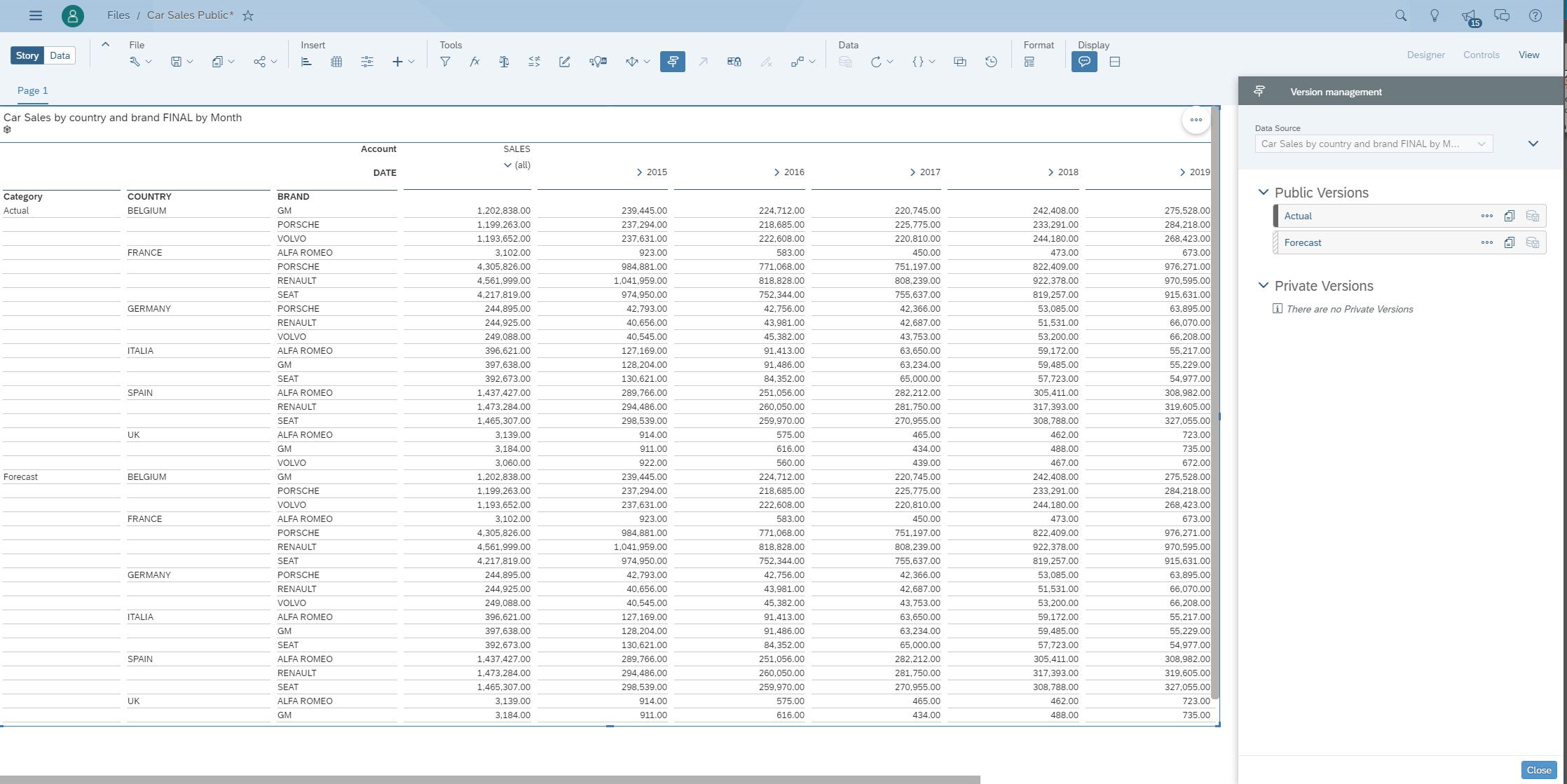 Fig 2: Story on planning model with Actual and Forecast versions

The planner creates a private version as shown below. It will be their working version in which predictive forecasts will be generated. So, there is no need to copy historical data in this version. 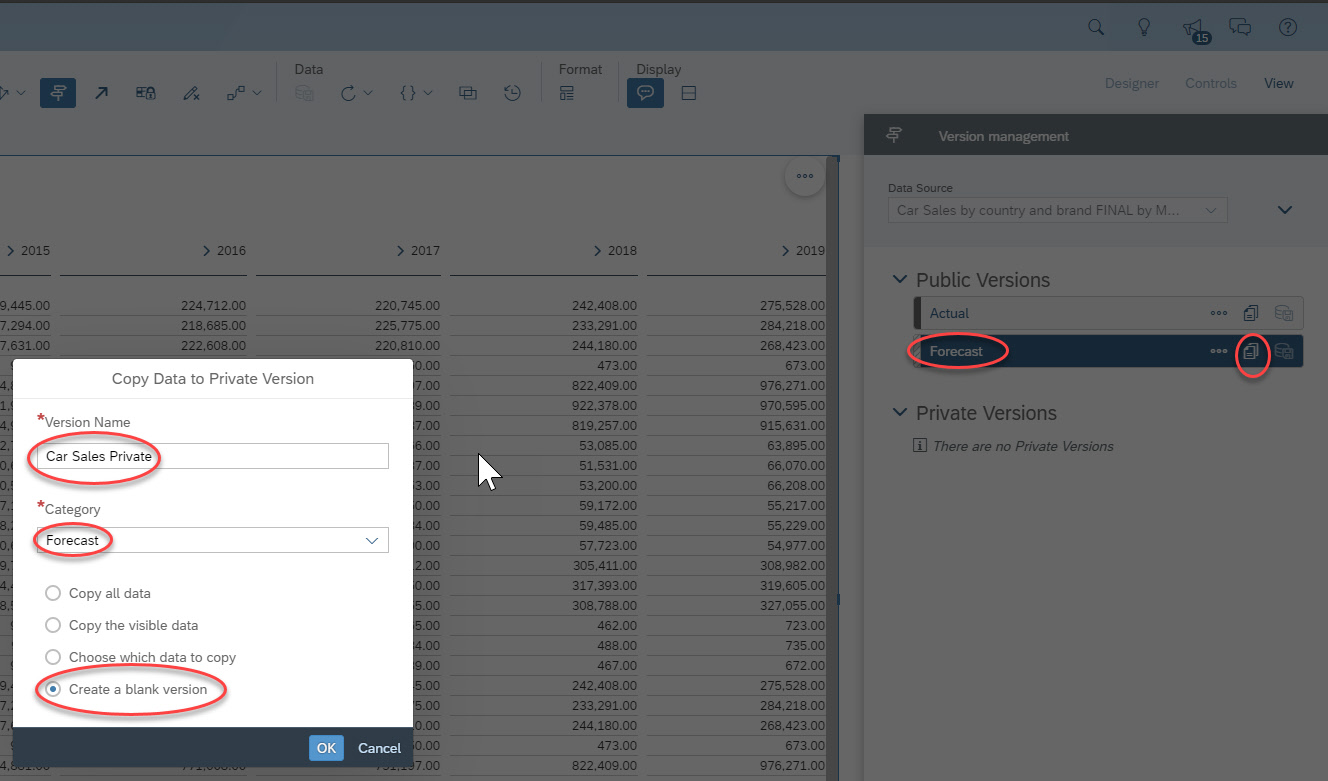 As soon as the planner clicks on the “OK” button, the private version called “Car Sales Private” is created. 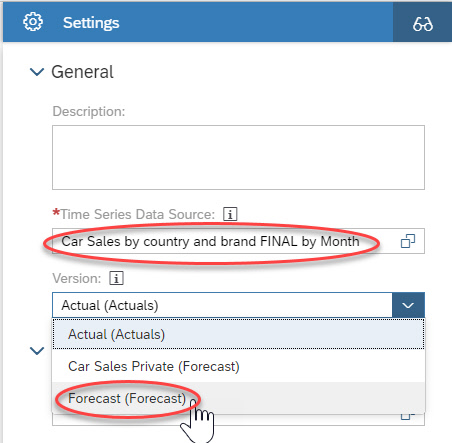 The planner then chooses the account member “SALES” as signal (value to predict), and the date dimension “DATE”. As the planner wants to predict the full year 2020, the number of forecasts is 12 months. The planner wants predictions for all valid combinations of country and brand. Thus, they select the dimensions “COUNTRY” and “BRAND” in the “Entity” field. In the end, the settings panel looks like this.

The planner selects the “Train & Forecast” button to build a predictive model. After a while, they can inspect the explanation pages for each country and brand, and get the sales forecasts for 2020. To get details about these pages, I invite you to read this blog “Time Series Forecasting in SAP Analytics Cloud Smart Predict in Detail”.

Fig 7: Predictive model for 2020 for Germany and Porsche 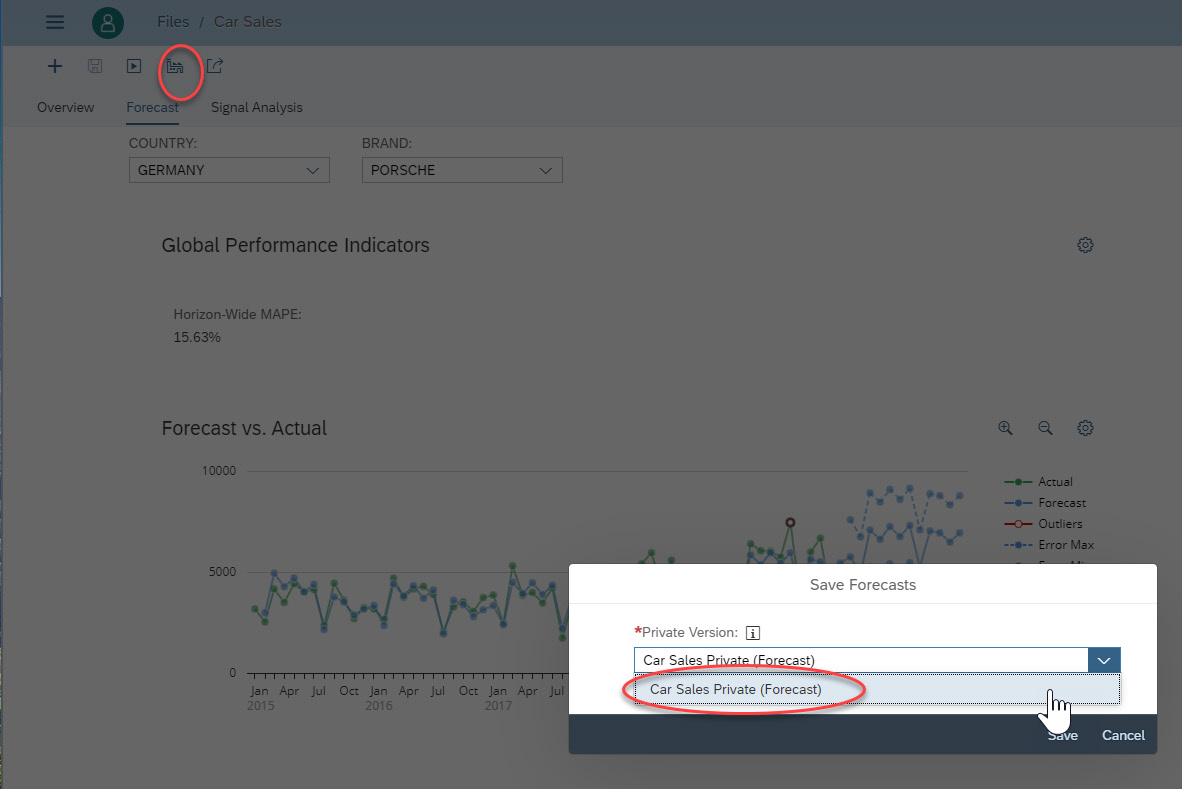 Fig 8: Create forecasts and save them in the private version of the planning model

Once done, the planner goes back to the planning story to see the private version updated with the predictive forecasts. 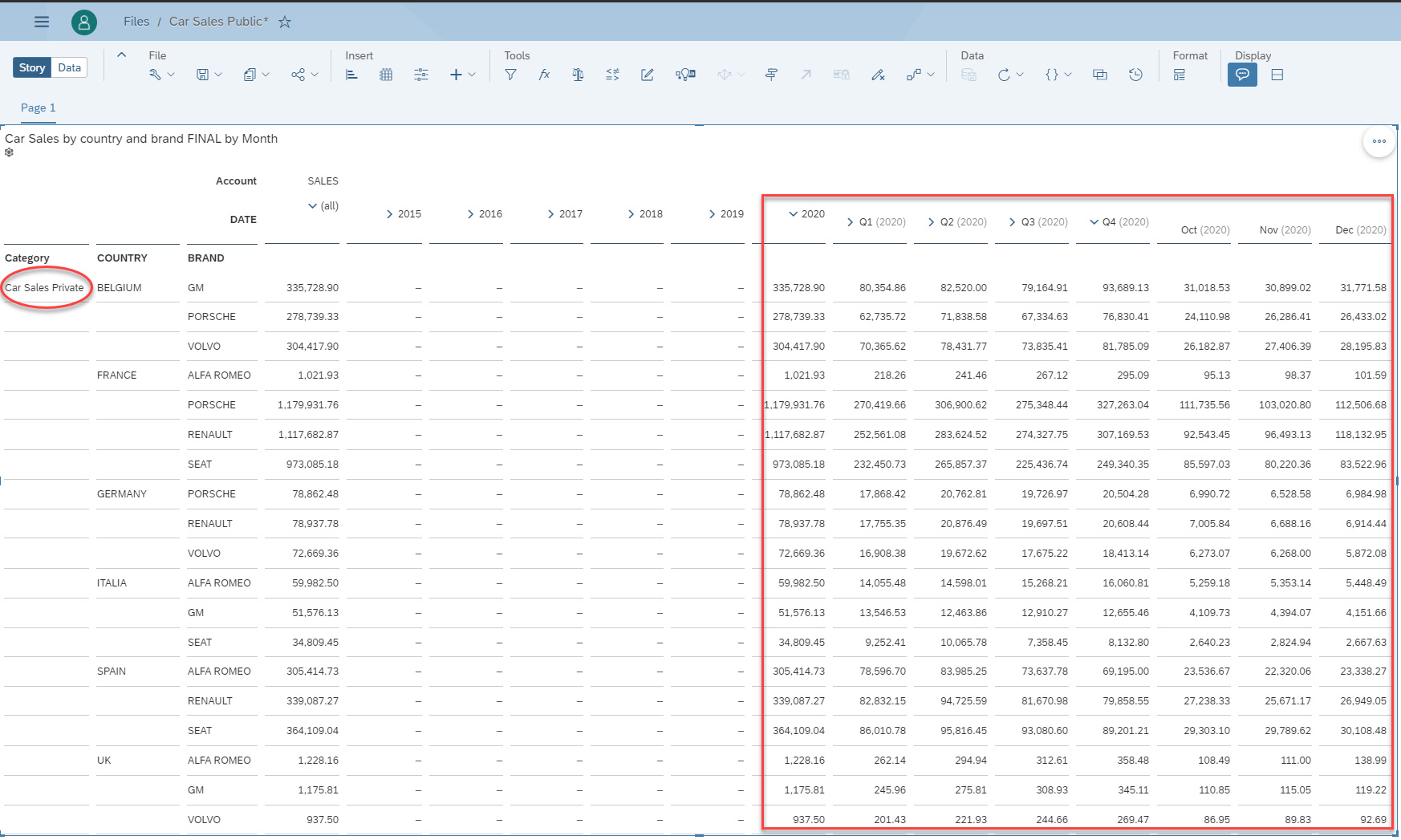 Fig 9: Sales forecasts reported on the private version of the planning model

The planner can now use planning features like allocation process to adapt and refine the private version to meet their expectations and their objectives.

There are now two private versions:

In the Version management panel, the planner selects the copy of the private version, and clicks on the “Publish” button. 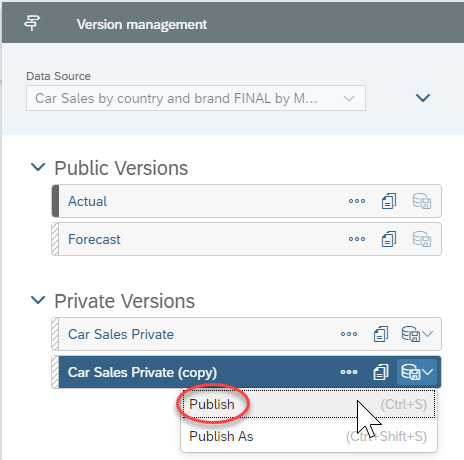 Fig 12: Publication of the copy of the private version

Then they choose the public version of the planning.

I hope these steps will help save you some time in the future. If you appreciated reading this, I’d be very grateful if you left a comment to that effect, and don’t forget to like it as well. Thank you.

Hi Thierry, upon publishing a private version to a public version, how does SAC decide which data range to override? And how can we influence that? For example: not to override any manually planned forecast data in public version.

Now there is a way to have more control. It is to enable Data Access Control for a dimension in the planning model. It restricts in the public version the data you can change by assigning read/write or only read permission. In your private version you can do any change you want, but changes on dimensions which have only read access in the public version will not be reported during the publication. You will find more details in the help about how to set Data Access Control.

The next question might be how to preserve human-driven forecast?

But if you do manual adjustment forecast for 2020 and request also Predictive Planning for 2020, you will have to choose which forecasts to keep.

First you can compare the two forecasts (human-driven and Predictive Planning) and if you want to keep values from both type of forecast, you have to enter them manually.

I hope this answer to your questions.