Back when I was doing Member of the Month interviews, I would typically highlight people for their actual contributions to community.sap.com — writing blog posts, answering questions, that sort of thing. But in the Spotlight Interview series, I’m talking to SAP Champions who embody the notion that a true community is everywhere and anywhere. Put another way, while SAP Champions do indeed often contribute frequently to questions and answers and blogging, many of them also make their mark outside of the site — by participating in a variety of events.

Such is the case with my latest interviewee, Damir Majer. Just take a look at his reputation section (and don’t overlook his older account, linked to his current one). You’ll see that as an organizer of (and speaker at) ABAP Events and SAP Inside Tracks, Damir has earned events-related badges going all the way back to 2013.

Of course, 2013 was a hundred years ago…or at least feels that way these days. In 2020, putting together events ain’t quite what it used to be. But Damir, ever the adept event organizer, is still managing to bring people together — even as the current state of affairs has kept so many of us apart.

In this interview, Damir and I talked about the move to virtual events, particularly the SAP Online Track for Munich and Vienna — and a whole lot more. 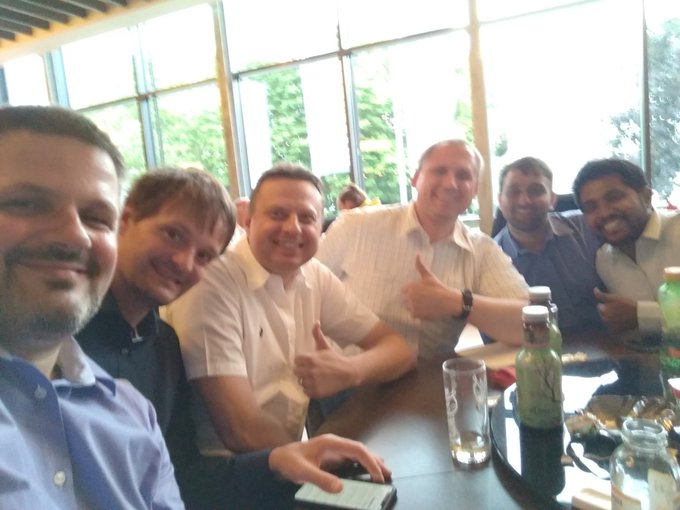 Oh, happier days — when we could get together. Good thing we have SAP Champions such as Damir (third from the left), who is working to coordinate a variety of virtual events.

Hello, Damir. Thanks for taking the time to talk today.
Hi, Jerry. Thanks for giving me the option for this interview.

My pleasure! Before we get into events, I — and I’m sure readers — would like to know a little bit more about you. Your company is Majer Consulting. Can you tell us what you do?
We support with services that companies benefit more efficiently and smoothly from better software. For more than 20 years, we have been developing and supporting others in modernizing software. Our services focus on improving the status quo. We focus here especially on the quality of software, save costs, and above all have maintainable and extensible software. We’re naming this as Software Quality Engineering Services.

Where are you based? Are you from there originally? I’m always curious to hear about people’s travels…especially since most of us aren’t traveling these days.
My company and also family is based in Munich. Due to business, we moved a lot within Germany, but now Munich is our home.

Prior to Majer Consulting, what was your career like? Your education?
During my computer science studies, I recognized my talent in this area. This talent was intensively promoted by many happy circumstances in the following years. The stations I would like to emphasize are the jobs at KPMG and isacon. Here I received individual support in form of one-to-one coaching over the years, which catapulted me to a different level as a technology consultant.

You focus on ABAP, but you’re also an expert in other areas. How have your skills and knowledge evolved over the years?
I would never claim to be an expert in any field. There is a Japanese mindset/approach. It’s called Ikigai. A too short translation would be “a reason to jump out of bed each morning.” My Ikigai is related to quality or craftmanship and to connect dots together. I’m still on the way to find out what is the meaning of high software quality and an appropriate application of it.

My first program I have written 1990. As a professional software engineer, I realized that only focusing on some topics restricted me somehow. I decided to extend my knowledge in software testing and software architecture. This enabled me to improve as an ABAP software engineer. Through this journey, I’ve managed to look in other programming languages. The most ones that influenced my knowledge were LISP, Smalltalk especially Pharo, and Java. Always I’ve been looking for making results on a higher quality level. But one topic got me caught and influenced me most of all other things. It’s the Clean Code Approach, which is also the foundation of the services that we provide within my company.

When did you sign up for the SAP Community? What prompted you to become a member?
I started around 2007 with first activities on SCN. The first intention was related to unit tests with ABAP and to get in touch with people that are using those approaches at that time. Later due to lucky circumstance, I got in contact with Gregor Wolf and Martin Steinberg and others.

We decided to get again active as an SAP community in Munich and started to organize the first SAP Inside Track Munich at 2013. Afterwards, the SAP Stammtisch format got introduced, and today we have over five hundred members at SAP Stammtisch Munich.

As an SAP Champion and community veteran, what sort of advice do you have for members who are just getting involved with SAP Community for the first time?
Just do it. Start asking questions, attend at the numerous events worldwide. Get in touch directly with the SAP Community. It’s one of the friendliest that exists around the IT ecosystem.

And speaking of SAP Champions — what was your reaction when you were invited to join the program?
It was like a shock moment for me. I did not really believe that this would happen. After the first shock, it was and still is an honor to be chosen for this. 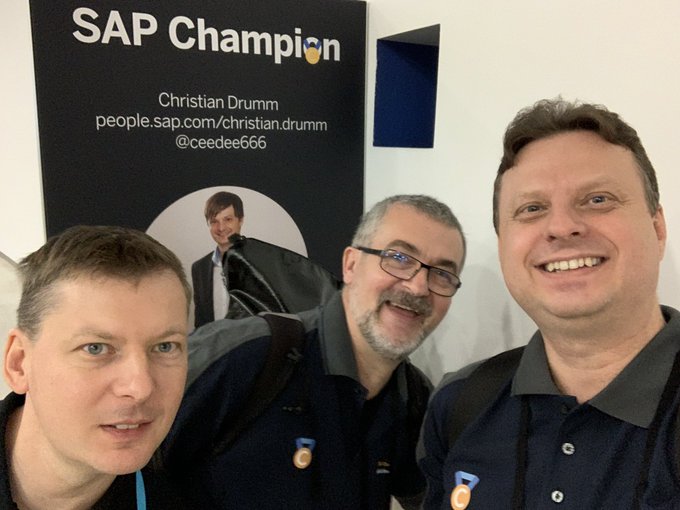 A gathering of SAP Champions: Damir (far right) is joined by (from the left) Karol Kalisz and Jakob Flaman…as well as Christian Drumm (sort of).

What does being an SAP Champion mean to you?
It is the possibility to get in touch with the community. It opens many direct entrances to different groups. In particular, it is an immense support for the formats we implement to get more reach and visibility. I’d like to connect with people and to drive community. This helps me to be seen more from SAP-interested people.

As I mentioned in the intro, you’ve been an important part of community-related events for years. How and why did you get involved?
For years, I’ve had discussions with individuals that we need more technology events in the SAP world. The discussions always ended in such a way that we said that this would have to be implemented, but nobody took action…until one of my coaching clients liked the idea, and I think it was because they had already thought about it themselves. This was the case with the ABAP CodeRetreat format. Christian Drumm took part in the first one, and I asked him if he would like to be active in this format. Since then we have done about thirty community formats. In 2018 at SITMUC, we got asked by Sascha Junkert and Johannes Konings if we like to support and set up a new format, and Christian Drumm and Christian Günter agreed to build the Group for the abapGit Bunkai format. It’s fun to share knowledge and the mentioned people have a mindset that resonates how I see community work.

How has the current state of the world affected how you do events? How have you gone about making things virtual?
For our community events we decided pretty soon that we won’t do anything as presence formats. We decided at April to continue with our formats on a virtual way. From May to July, we had monthly online events that worked successful for everyone. We’re currently still on the planning phase for the next virtual events! Stay tuned for announcements on this.

What can you tell me about the SAP Online Track for Munich and Vienna?
Another SAP Champion, Johann Fößleitner, asked me a couple of weeks ago if we should connect Munich and Vienna for doing an SAP Inside Track together. Of course, we decided to give it a try. In the meanwhile, after some grateful hints from Christian Braukmüller, we changed also the name of this event. It’s an online event, so we’re using SAP Online Track Munich and Vienna — short SOTMUCVIE — as an event name. The event will be held on October 22 and October 29. We’re preparing an outstanding schedule with new formats and other things. Feel free to look at the event page for further information.

We appreciate all the effort you’re putting in. But when you’re not running your business and helping with community events, how do you spend your downtime — assuming you have any? Any favorite hobbies or activities?
The most important thing that matters is my family. We try to spend as much time as we can together. In the spare time, I’m interested in martial arts, chess, and Japan.

We’ve chatted about a lot. Anything else you’d care to add?
I’d like to thank SAP and the group around the SAP Community that supports us! Please keep doing your great work! It’s highly appreciated. Just THANK YOU to all of this group.

And with that, I’ll let you get back to it. I’m really looking forward to the events at the end of October!
Thank you for inviting me to this interview. Greetings from Munich!

I'm so happy Damir Majer is a SAP Champion.   For those that are not subscribed.  Damir sends out a weekly Developer's guide to the links he likes the best.  Most link back the the SAP Community, but there are other link's as well.   I really like this weekly E-mail.   It has all the things that I'd want to go read without me searching for them.   Of course the blogs that are on the community are the best.  🙂