Extract from SAP ECC COPA the financial KPIs formulas (defined in trx KE36) to SAP BW. Then calculate P&L KPIs based on the COPA cube

Explain how to build a dataflow extracting the financial KPIs definitions (see transaction KE36 or KE33) of ECC COPA module to SAP BW.

A form in ECC COPA is like a spreadsheet with many key figures that compound the P&L’s KPIs of a company such as Net Sales, Gross Profit, Operating Profit, etc.

With those forms and formulas in SAP BW, then you can calculate the KPIs applying the formulas to the key figures stored in the COPA cube.

The main requirement was to keep the P&L’s KPIs defined in ECC COPA updated in BW.

Furthermore, the organization was multicompany, so they had many forms, one per each company. Each form had different formulas (different ways of calculation) for the same KPI.

This was a research with some deductions I made and implemented successfully in a client.

The solution includes ABAP programming in the expert routine of a transformation. I will explain it briefly with a pseudo code.

Formulas definitions dataflow example: 8 forms, one per company in the source system (ECC) 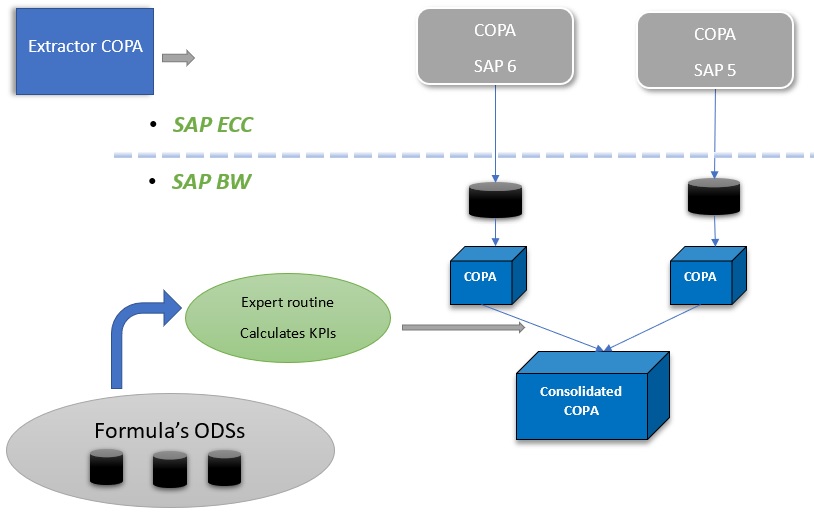 In SAP ECC we have these 4 tables that holds forms and formulas definitions:

Based on these tables, we must create 3 generic datasources:

Then create the generic datasource based on this Infoset:

The field “Pointer” is the identifier of the form’s element.

It is based on the table TKESK. It cointains formulas for each form:

Each formula can refer to other formulas or elements defined in the extractor XFD_COPA_FLTR (filtered elements).

One formula could take more than one line, as I remark in red. One formula is identified by the Element ID (for example Z100470000)

After creating those 3 generic datasources, we have to create its dataflow storing the data in 3 ODS respectively:

We need to configure some mapping between the ECC COPA and SAP BW components. We need to create 3 tables to set the relationships:

2. Table ZRELFORMULAS_BI: define the relation between the KPIs in ECC COPA and the respective key figure in SAP BW.

3. Table ZRELFLDSAP_BI: maps the fields in ECC with infoobjects: for example, a ratio is filtered by some values of the Document Type. In ECC the field’s name is AUART. In SAP BW the infoobject name is 0DOC_TYPE.

The Consolidation cube will holds the KPIs calculated based on ECC COPA formulas and the basic fields of the COPA Cube (the transactional data). 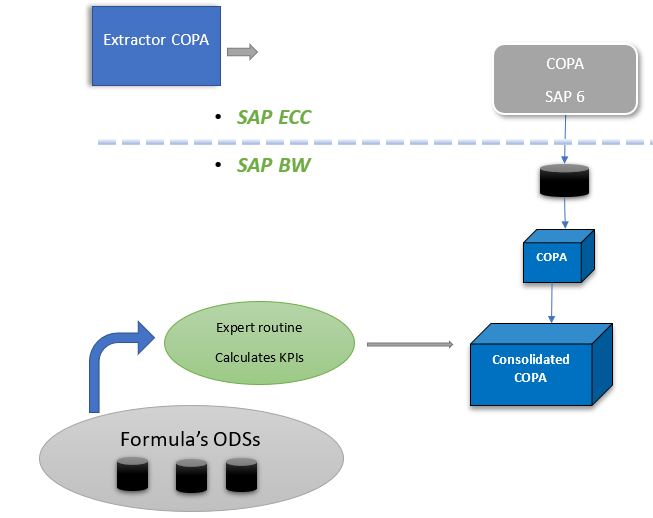 The routine will simulate a recursive programming to calculate the formulas, because one formula could be used in another formula.

The above mentioned solution keeps the ECC COPA financial KPIs updated in SAP BW. Also could be used to integrate multicompany P&Ls.