Material in this blog post is provided for information and technical features demonstration purposes only. The described technique might introduce security risks, if applied carelessly. In real-life scenarios, the technique shall be assessed and evaluated for practical applicability only in emergency cases and shall be applied only by authorized personnel.

A security incident report has been submitted to the SAP Product Security Response Team, and the recommendation that has been provided by the SAP team, is to ensure that relevant control measures are in place, as described in the corresponding blog post.

In SAP CPI, PGP keys are stored in two keyrings:

Oops, we lost the passphrase of the secret keyring. Houston, we have a problem.

We are clear about importance of restricting access to private keys and secret keyring passphrases, and consequences of failing to do so. Now, what if we used to keep the passphrase in a protected and restricted vault, but due to some unforeseen circumstances, we accidently lost that passphrase?

Recreation and replacement of the secret keyring?! We need a plan B. OSGi to the rescue!

In this blog post, I would like to demonstrate an alternative approach to replacing the affected secret keyring – that is, a method to programmatically retrieve the passphrase of the secret keyring from the CPI tenant.

CPI uses an OSGi container – Apache Karaf – as its application runtime. One of fundamental principles and core layers of the OSGi architecture is the service layer, that is about services provisioning, discovery and consumption. This is an important concept that enables modularity and a high level of abstraction and transparency, as deployed components (bundles) don’t need to be aware of implementation details of the required service – instead, they can search for the required service in the registry (where corresponding services are registered by service provider bundles), and consume capabilities offered by a relevant found service. A service consumer bundle doesn’t necessarily need to be aware of which other bundle provides the service – a scope of concern of the consumer is what capability / service it needs to use, if that service is available at runtime, and how the service can be consumed (how a consumer shall interact with the service to make use of it), but not what particular bundle provides that service and how the service is implemented.

CPI application runtime is equipped with a plethora of services – some of them are provided by core components of the application runtime, some others originate from the integration framework, SAP specific components, and from third-party or custom developments. Certain services are provided even by bundles that contain developed and deployed iFlows – even though this happens transparently to integration developers and doesn’t require any explicit configuration steps from them.

An OSGi framework (and correspondingly OSGi containers that are developed on top of that framework) offers unified and well-documented mechanisms on how services can be registered, discovered, filtered and consumed – these mechanisms are widely used by deployed bundles.

Keyring accessor is yet one of services provided by an SAP component that is registered at runtime startup and that is available at runtime to other components, including iFlows’ bundles. The keyring accessor service is accompanied by a number of accessor services for some other artifacts stored in the CPI tenant, but in this blog post, I will focus only on the keyring accessor. This service can be used to access the public keyring and the secret keyring – keyrings and their properties, keys contained in keyrings, etc. When exploring operations provided by this service, our attention can be attracted by a password getter operation – and that is right what we need here, as this operation can be used to access a passphrase of a keyring in plain text. Obviously, there is no sense to apply this operation for a public keyring, as a public keyring is not protected by a passphrase, but this is sensible when working with a secret keyring.

After we set the scene, let’s now get to the sample implementation.

Given iFlows are contained in corresponding generated bundles at runtime, available OSGi services can be consumed by iFlow components – including script steps that can implement arbitrary custom functions and consume available services. The approach can also extend to adapters, as adapters are just another type of bundles. In the below demo, I use a Groovy script that is added to the iFlow, but generally speaking, the described approach can be applied in conjunction with alternative programming languages that are supported by CPI – such as JavaScript that we can use to implement a script and use it in a step in the iFlow. Alternatively, we can use Java and develop an adapter, which component will also have access to corresponding OSGi services.

The entire logic that is required to use the keyring accessor service and retrieve the passphrase of the secret keyring, can be split into following steps:

A complete code snippet of the Groovy function is provided below:

For the purpose of an end-to-end demonstration, I created an iFlow that consists of a single step – a Groovy script step that uses the Groovy function provided above. The iFlow uses HTTPS sender connection – in this way, we can call it later using some HTTP client:

I also uploaded the secret keyring to the CPI tenant:

The secret keyring isn’t empty (I added a sample key to it) and is protected with the passphrase.

After the iFlow with the described Groovy script is deployed to the runtime, let’s call it. I send an HTTP GET request to the endpoint of the iFlow using Postman: 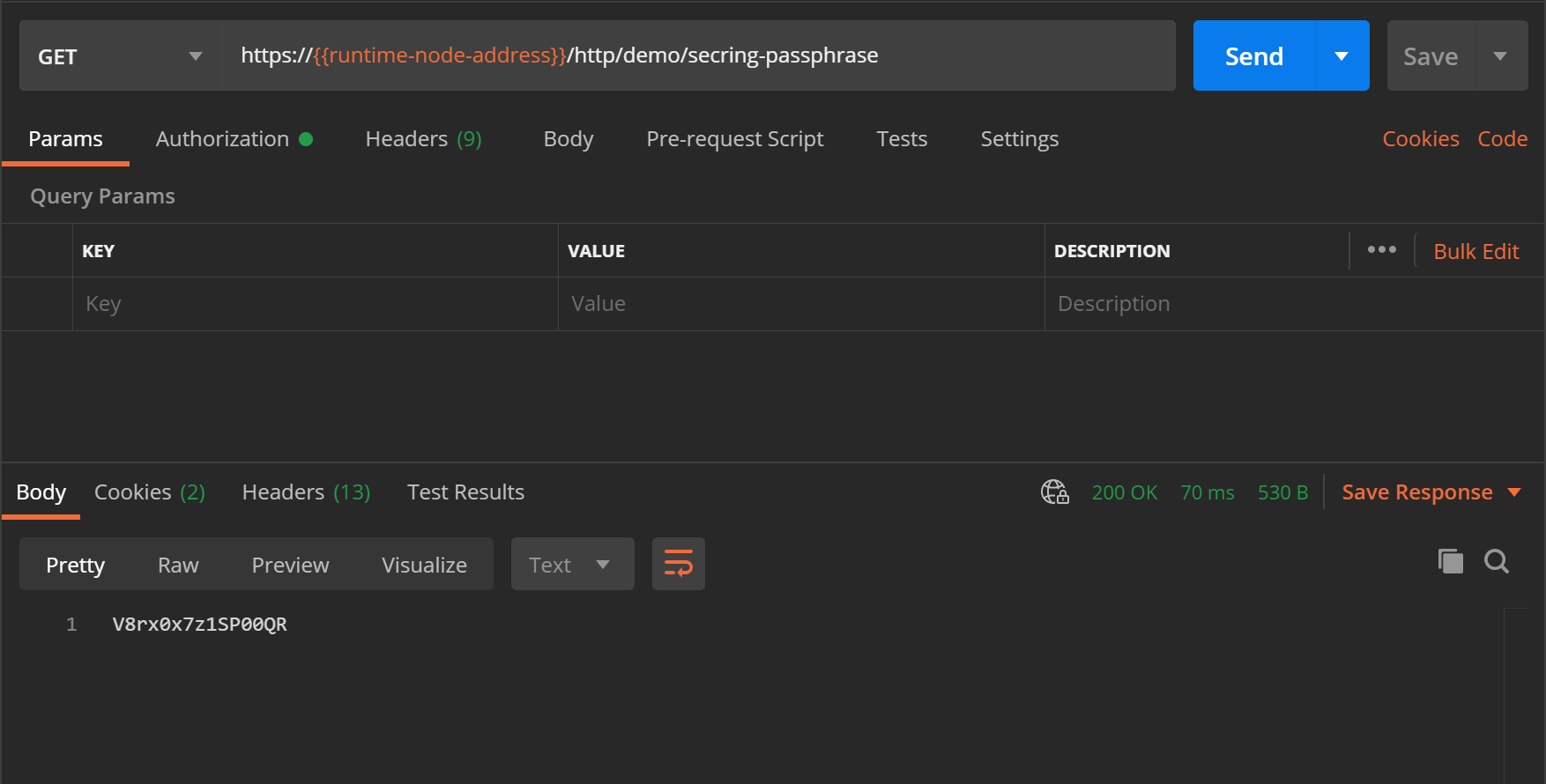 Note that response body contains some cryptic character string – here in the demo, V8rx0x7z1SP00QR. This is the passphrase of the secret keyring in plain text (and not its encrypted version / hash).

Should we want to validate this passphrase, we can do this with the help of various PGP tools. I use a combination of GnuPG (backend) and Kleopatra (frontend) that are a part of Gpg4win for this purpose.

One way or another, when keys got imported to a local keyring, we have several other methods to test the passphrase – for example:

In both cases, you will be prompted to enter a passphrase, and if the entered passphrase is wrong, an operation will fail.

The approach that was described and demonstrated in this blog post might raise security concerns – and that is exactly what it is intended to trigger. One of reasons for me to write this blog post – besides sharing a practical method of recovering a lost passphrase of a secret keyring – was to emphasize importance of security considerations when working with CPI and to encourage you to reflect on following few points: