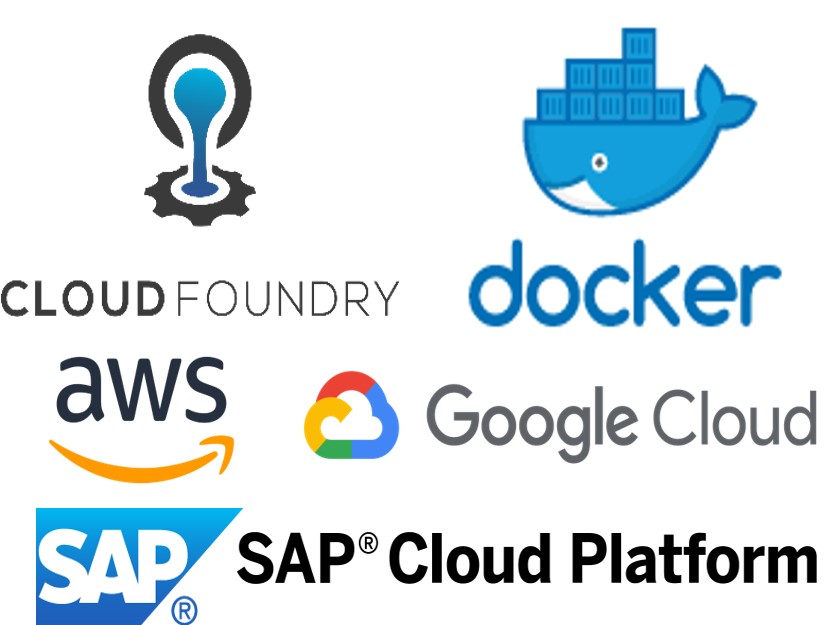 This blog post focuses on the deployment of an application using Docker Container on SAP Cloud Platform Cloud Foundry (CF).

Concepts of Containerization, Virtualization, and Life cycle of Docker containers can be found here.

There are many blogs explaining deployment from Docker Hub to SAP Cloud Platform Cloud Foundry, but I could not find any blog or documentation for AWS and GCP. So, I decided to write this blog by consolidating steps to deploy the docker image from AWS and GCP.

This blog is an attempt to provide simple, systematic but detailed steps to deploy docker containers from AWS and GCP to SAP Cloud Foundry.

What will we do?

So, before starting I am assuming a few things, you can take them as initial requirements.

We will use sample code available at https://hub.docker.com/

Clone the project from git as below

Let us build the docker image as below 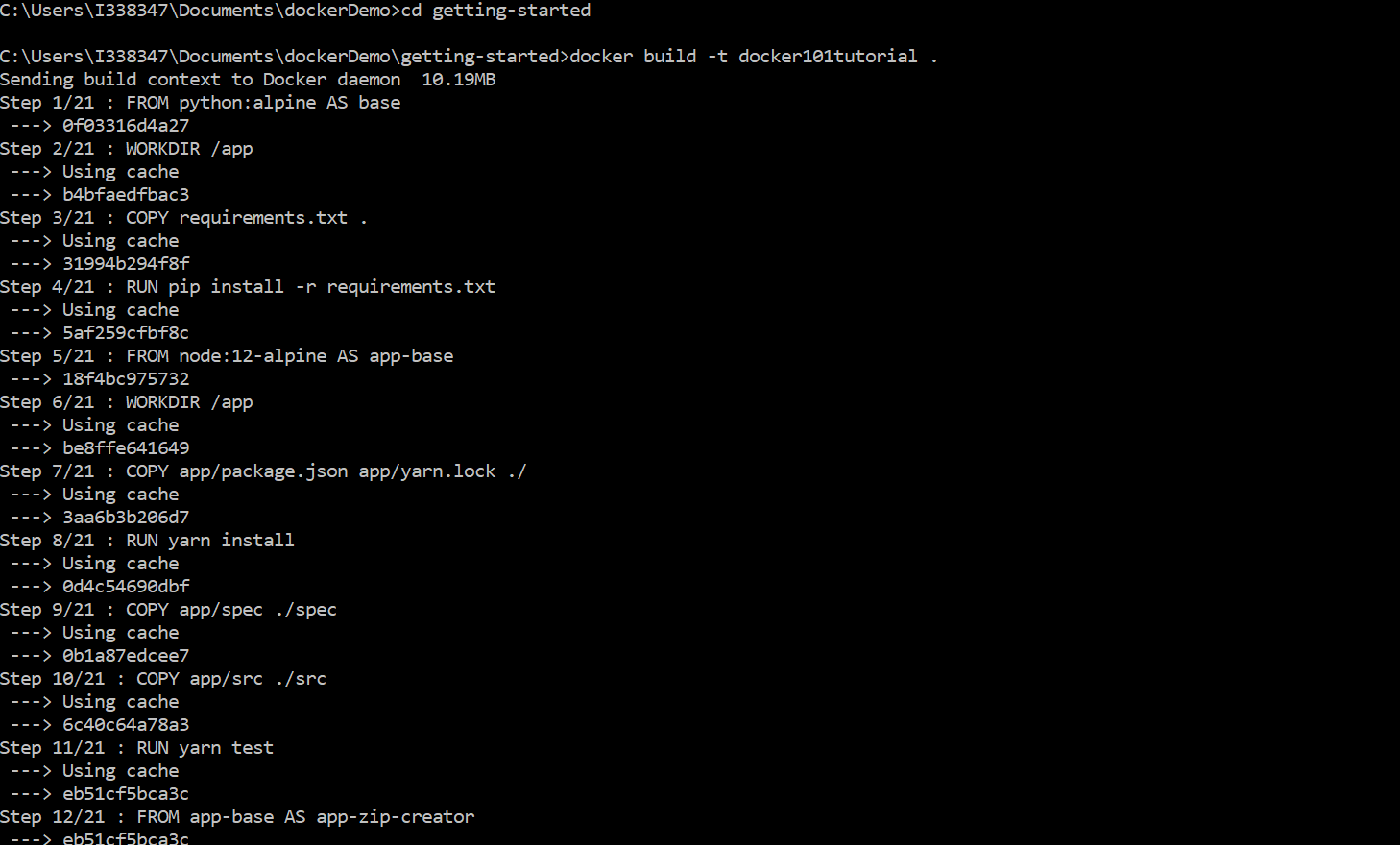 Let us run the docker image locally and check if it is working correctly.

Check http://localhost:80 in the browser Step 4: Create a new repository to push the docker image 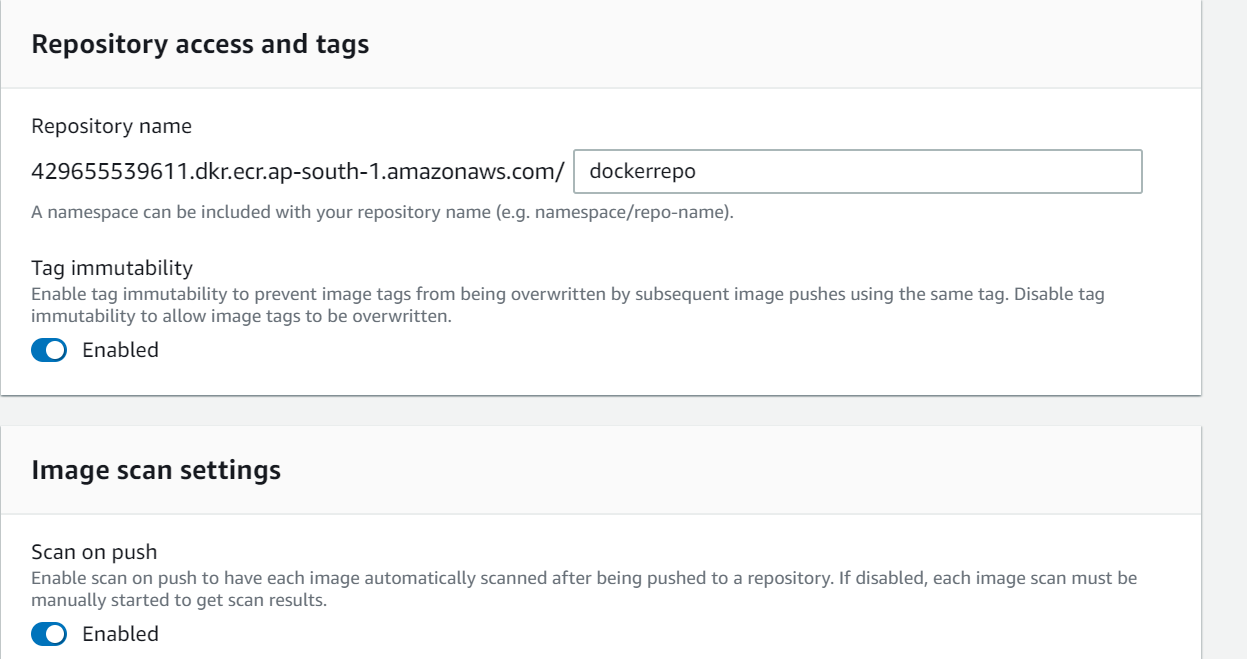 Now it is time to push local docker image to AWS ECR repository that we have created.

You can create the new key as well. It is better to download the secret access key as it is not visible in the console after it is generated and displayed only once.

Push docker image to AWS ECR repository as below:

You can check the pushed docker in AWS ECR in AWS Console.

Step 7: Let us deploy this image to SAP Cloud Platform Cloud Foundry environment and run it as below using CLI 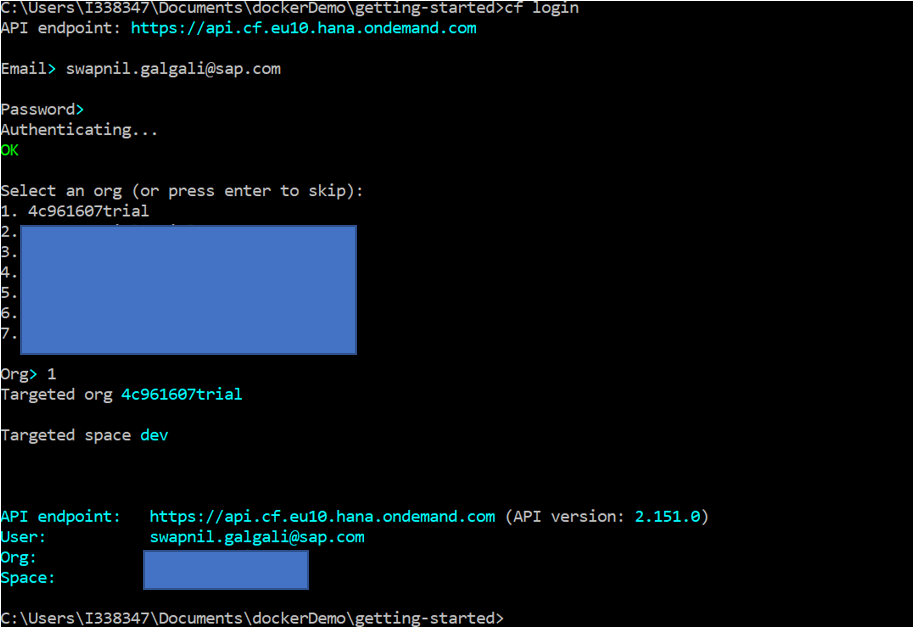 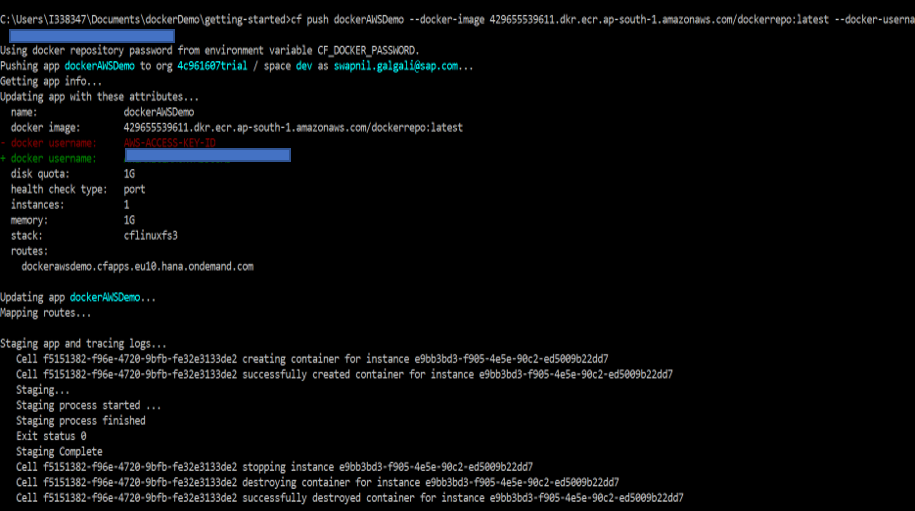 Step 8: Copy the route from the deployed app and open it in the browser.

You should be able to view below the page. 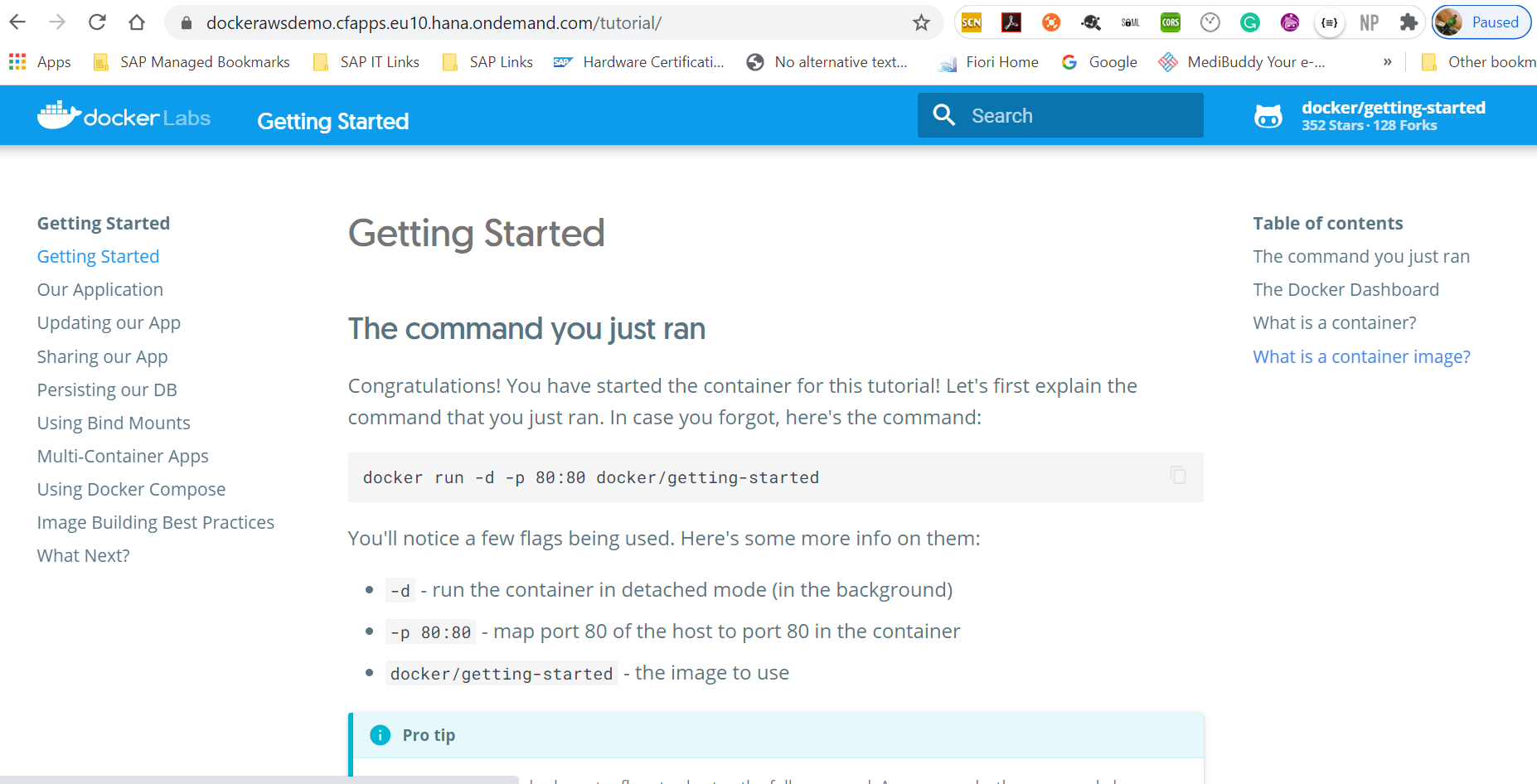 Log in to cloud sdk as below with the following command.

It fetches the default service account and you can set the project id on which we will be pushing the docker image. 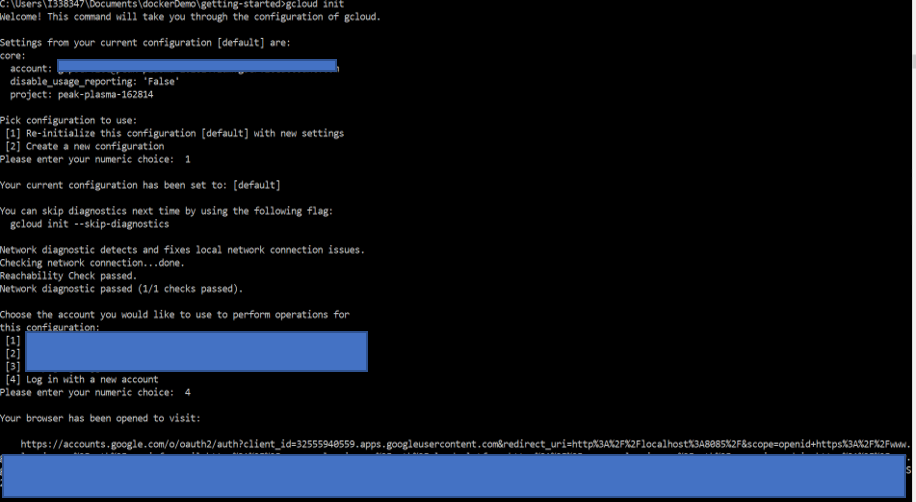 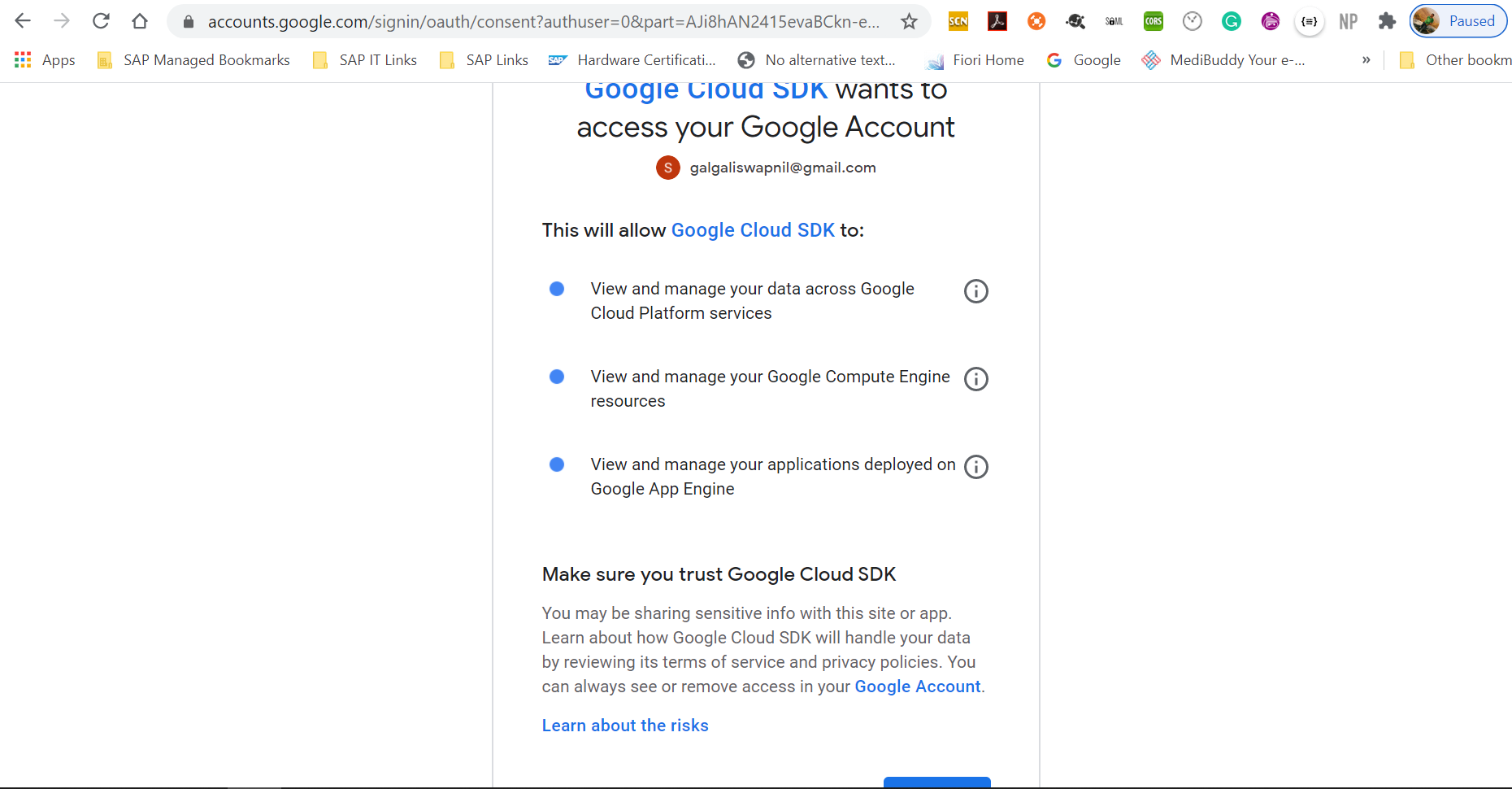 Step 9: We need to create a service account in order to push docker images to Google Container Registry and Deploy it on SAP Cloud Platform 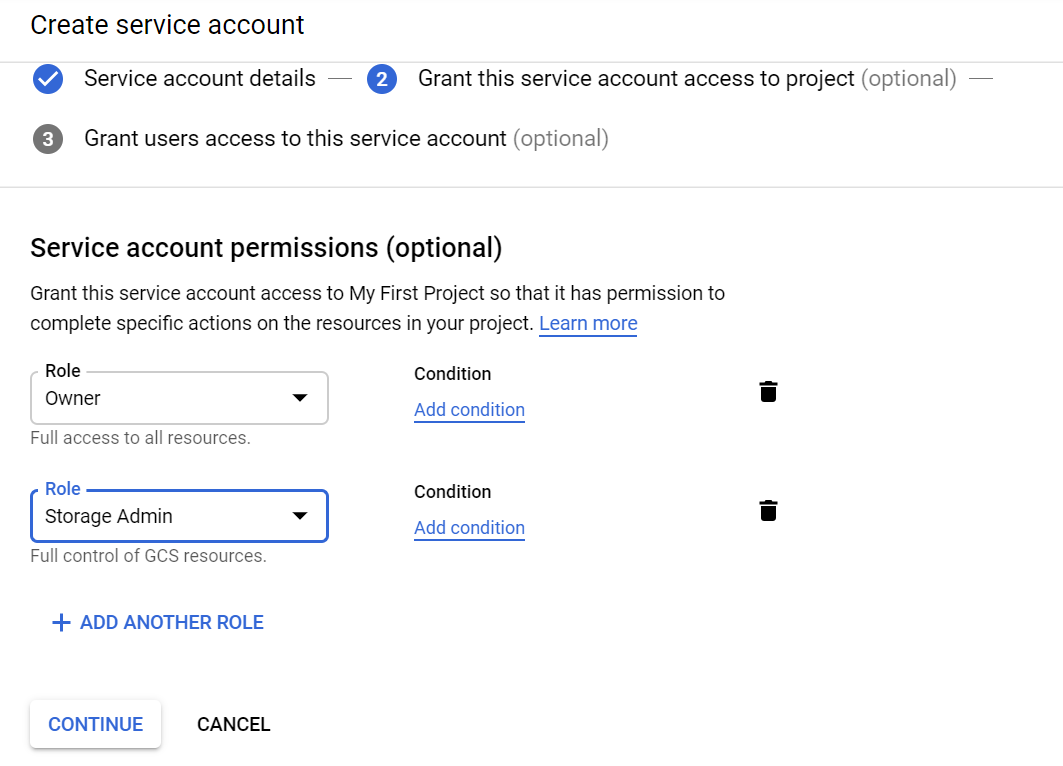 While pushing Docker images to Google Container Registry, it uses Cloud Storage service hence we need to provide StorageAdmin access to the account.

The email contains the full path of service account which will be used to authenticate Google Container Registry services.

Using which we deploy this docker image to SAP Cloud Platform

Once we are able to login successfully with the oauth2 token, we should be able to deploy a docker image from Google Container Registry to SAP Cloud Platform as below: 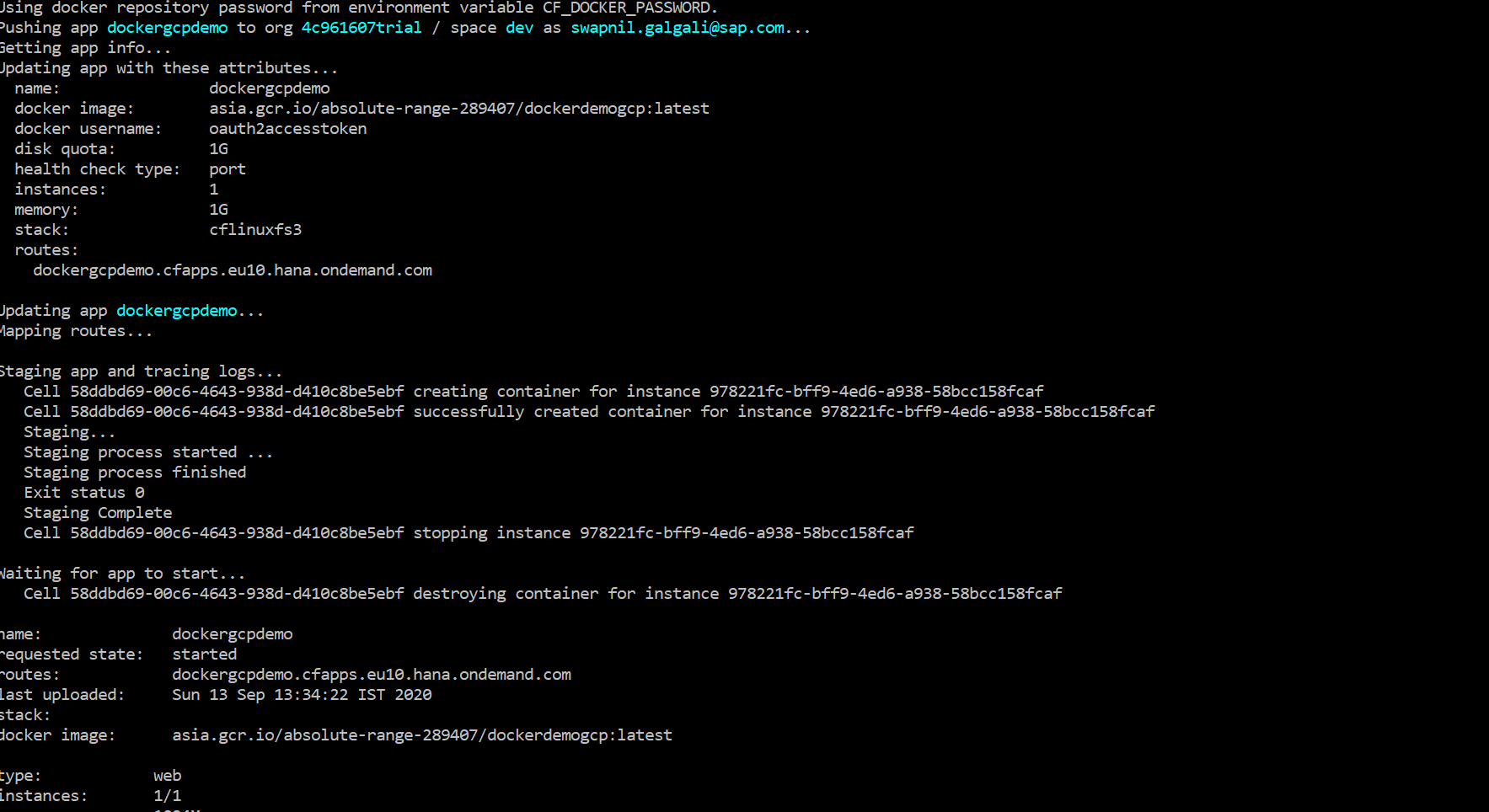 Step 13: Kindly confirm if the image is running correctly or not by pasting the route in the browser.

Once we follow all the steps mentioned above, we will be able to deploy docker containers from AWS as well as GCP on SAP Cloud Platform Cloud Foundry.

I hope this blog post will help you to deploy docker images on SAP Cloud Platform Cloud Foundry.

Great blog, by using this approach customers will be able to containerise their applications and deploy to the hyperscaler of their choice.  This is key since different hyperscalers do offer different  different services at different cost models.

There is one point I would need help: What are the benefits of running the docker image in SCP instead of in AWS ECR directly?

Okay, SCP's "CF" command to deploy the image is the same in Google and Amazon instead of two different CLI commands but that is little to no advantage. And if you use kubectl (Kubernetes) in both, it is the same again.

All important SCP services, e.g. Hana DWH Cloud, Hana DBaaS can be connected to from outside, so that's no argument either.

AWS ECR is a service that provides a repository to maintain docker images.
AWS ECS, AWS Fargate, AWS Batch, and AWS EKS are the services that allow users to deploy docker images.
Each of the services has separate pricing associated with it.
https://aws.amazon.com/ecs/pricing/

When a docker image is deployed on SAP Cloud Platform CF, it is just another Cloud Foundry Application. So it consumes the Application Runtime resources from the underlying SAP Cloud Platform service plan(CPEA/Subscription). No additional cost is required specifically for the docker container.

CF commands are not SCP specific. It is the Cloud Foundry specification.
You can find all the commands at below link:
https://docs.cloudfoundry.org/cf-cli/

All these commands support the cloud platform which follows Cloud Foundry Specifications like Pivot, SAP Cloud Platform, BOSH to name a few.

Even though CF commands are same for AWS and GCP, authentication mechanism/methods supported by both platform differs as shown in the above blog post.