What is HANA persistent memory or NVRAM (Available since SAP HANA 2.00.035)

NVRAM is an emerging class of memory storage devices offering a DIMM form-factor. Hence, it can be treated by the CPU as RAM, not as a block device: it is byte-addressable, directly accessible using load/store instructions, and covered by CPU cache-line handling, including cross-socket cache coherency. The device latency is expected to be close to that of DRAM and its bandwidth lower than that of DRAM. The density, durability and economic characteristics however match that of existing blockbased storage media. Due to these attributes, NVRAM can potentially benefit applications that deal with big data analytics, in-memory databases, high availability systems, etc

2.How does data in HANA gets distributed if we use SAP HANA persistent memory? 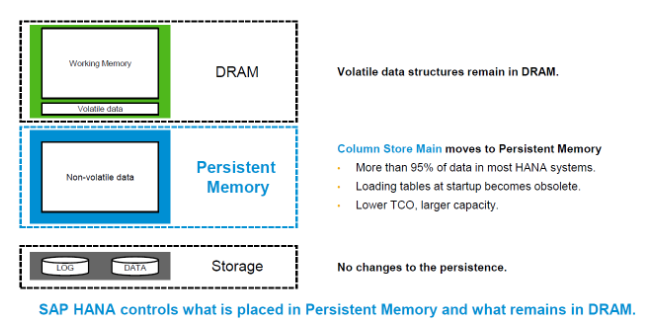 As SAP HANA Persistent Memory(NVM) is heavily optimized in terms of compression, HANA column store tables which does not  get modified frequently (less than once per day) are excellent candidates for HANA persistent memory.

It is also a very stable – non-volatile – data structure. The main store typically contains well over 90% of the data footprint in most SAP HANA databases, which means it offers a lot of potential. Furthermore, it is reconstructed rarely during the delta merge. A process that is only triggered after a certain threshold of changes to the database table was reached. For most tables, a delta merge does not happen more than once a day.

4.How does a column store table gets distributed in case if NVRAM? 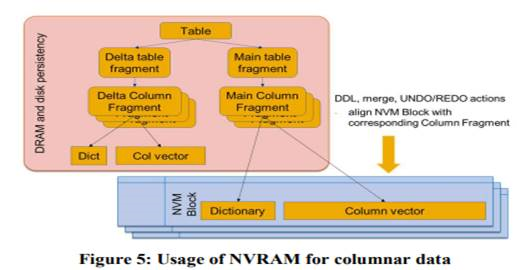 5.How does usage of HANA NVM helps start up time?How is it advantageous over DRAM?

With pure DRAM, this initial load happens every time the database is started, which means also after planned or unplanned outages. Systems that cannot tolerate the impact on performance often use system replication to circumvent this With persistent memory, the initial load of the column store is no longer necessary. Column store data is retained across database and even server restarts, which decreases the loading time significantly.

6.With the usage of persistent memory , does the memory requirement increases ?

7. What are the prerequisite for using persistent memory?

Persistent memory is supported with SAP HANA 2.00.035 and higher. We need to have the appropriate underlying hardware in place in order to take advantage.

8.Does the parameter global_allocation_limit affects persistent memory usage in HANA ?

9.What are the advantages and disadvantages that can be used while using NVRAM against DRAM?

In the DIMM form-factor, the next-generation of NVRAM  will have impressive qualities.

-It will provide performance that is close to what only DRAM can achieve today.

-It will exceed the capacity of DRAM devices at a lower price per GB.

– Attached to a CPU socket memory channel, its use is transparent (except for its persistency): it is directly accessible using load/store instructions, byte-addressable, and covered by CPU cache line handling, including cross-socket cache coherency.

-Applications can access it directly without additional copies in DRAM.

– NVRAM being non-volatile, its contents will not be lost on system restart.

-HANA’s memory-oriented algorithms simply work as such, without the need for substantial changes to obtain an NVRAM-enabled binary

However, there are several limitations of this new type of memory.

-An asymmetry is expected between reading and writing, i.e. writing will be slower than reading.