Hello folks,I am writing this blog after my first GRC AC 12.0 implementation project for new newbies like me.

Through this blog I have tried to explain which all approaches can be considered in implementation projects for moving changes across the landscape. This will help in making decision from the initial stage of the project .

Considering that all configurations are attached to RFC names, there needs to be a way to be able to handle changes effectively across the landscape.

Create all the connections to the satellite systems (DEV,QAS,PRD) in GRC Dev and move to prod.  (Recommended approach) – Create DEV GRC as PRD GRC. Also, the Quality and Production satellite SM59 connections would be left empty to ensure nothing is provisioned from DEV GRC to QA or PRD satellite systems.

Firstly, changes can be tracked and will be consistent across the landscape. Satellite Connectors and configuration related to connections remains intact after system refresh from PRD. Change Management process will be followed effectively. Lastly, no Audit Concerns. 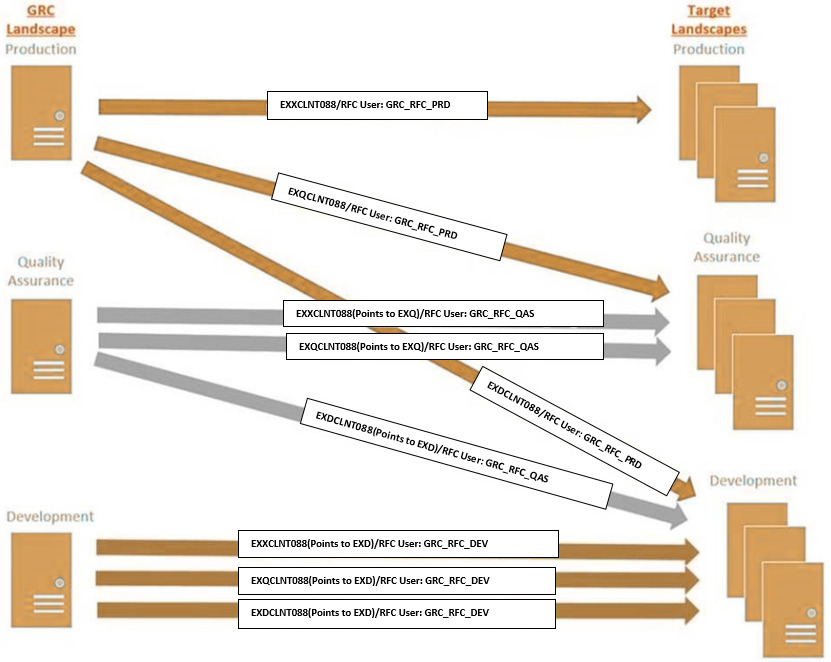 The only advantage here is that you get to use the usual RFC that can/may be useful for core team members to identify the RFCs by name. 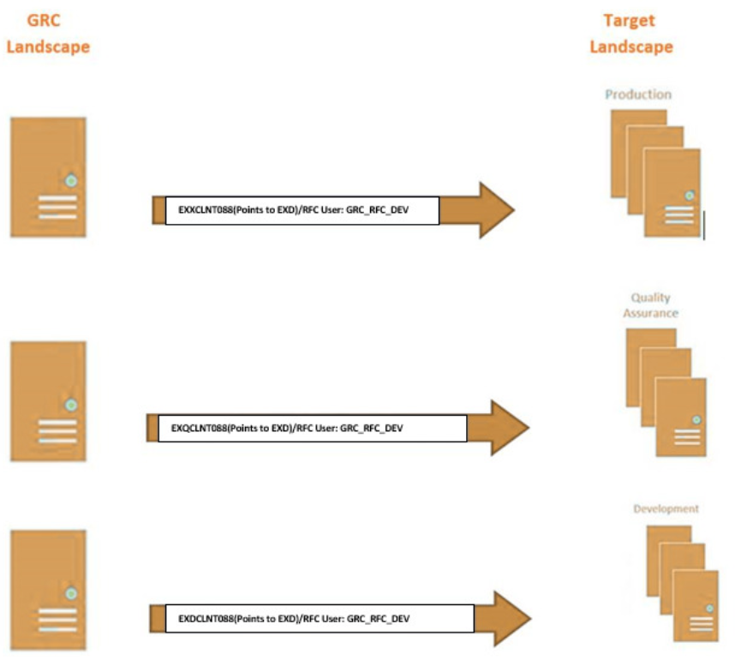 Firstly, easiest to configure. Only hostname of respective satellite connector needs to be updated after system refresh. Change Management process will be followed effectively. Lastly, no audit Concerns.

Personally, I found approach 1 as best as it generally works in all scenarios. However one needs to consider the approach depending on the GRC landscape.

I ‘d like everyone to provide suggestions/feedback and add all possible approaches to this blog that can be used during implementation projects.

great to see blogs like this appearing back in the community

do you have any impact considerations for target systems pointing to multiple GRC boxes? E.g. if you use Business Roles for provisioning and have GRC Prod and GRC QA connected to QA system what would that mean? Is there anything you might need to do or not do with the connectors

I like production having all connectors for vertical system management. Production can manage access and risk to non production landscapes

Apologies for the delay in response.

Thanks for bringing up that point.

In my scenario customer was using IDM with GRC where he was only interacting to GRC prod for creating roles in S\4 hana development system and then was transporting the roles in quality and production.

By defining such process at org level and educating the same to GRC core team, I don't see any issues or challenges even if backend is connected to multiple GRC system.

I know its been a couple years since this posted. I found your blog because I'm trying to determine how to add my non-prod boxes to GRC.

You also have to consider your sync jobs and manage those. We currently have 34 production systems attached to our prod GRC system. Managing and scheduling those sync jobs was tough.

So now I'd like to add all the DEV and QA boxes to GRC and as you can imagine adding 100+ to our production box probably won't work.

So I have couple options. Add a new client to my GRC production box. Or make one of my non-prod GRC boxes the main non-prod provisioning system?

If this is Audit requirement, then you might have to consider using GRC Prod and increase the sizing for the GRC box. But if this is an internal process enhancement, then it would be best for you to consider using GRC QA box as one of the provisioning systems as this would not consume additional resources on the PRD system (Even a different client would consume resources)

That does help. This is not a audit requirement we just need a solution for our non-prod boxes and since GRC is used and accepted by our end users it just makes sense for us.

Is there any note or recommendation from SAP? I've searched everywhere and can't find anything.

Hi Dave, I do not believe so.