With ABAP release 7.55, a new type of CDS view is available: in official terminology, it’s called CDS view entity. And it has come to replace the “classic” CDS DDIC-based views that have been around for years.

Motivation: why has SAP developed a new type of CDS view?

A CDS DDIC-based view is defined using the statement DEFINE VIEW. This kind of CDS view was first released with release 7.40, SP05 and it was for many years the only available kind of CDS view.

Here are some principal ways in which CDS view entities differ from CDS DDIC-based views:

Please note that the name of the annotation is a bit misleading. Of course, a view entity has an SQL view on the database, but now the intermediate DDIC view is not needed any more.

Additional features, such as typed literals to enhance type safety, and optimized buffer handling, are planned for future releases.

The following example compares a CDS DDIC-based view with a CDS view entity:

For a comprehensive description of CDS view entities, refer to ABAP Keyword Documentation (F1 Help in SAP GUI and ADT). 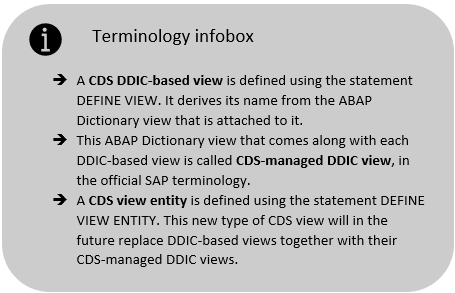 much awaited info.Thanks for sharing info.

Thanks Andrea, One thing which i want to clarify "Nested Expressions", will it includes Subqueries also?

Hi Tarun, no, subqueries are not supported in view entities and they are currently not planned.

"Nested expressions" rather refers to, for example:

Same for aggregate expressions, case, cast, built-in functions, and so on - they all allow other expressions as operands.

Can you throw some light on what would be impact on ODP transient provider? They do require a SQL view with prefix 2C.

There is also the annotation @Analytics.technicalName (String(16)). If this annotation is used in a CDS view entity, then the analytical query will be „2C<technicalName>“.

This annotation should be used especially when converting a CDS DDIC-based view to a CDS view entity and when you want the BW name to stay the same and not change during conversion.

Does this also imply that (since no SQL view gets generated), CDS view entity cannot be accessed natively in HANA database? There was a note 2511210 in the past mentioning that it "Should Not Be" . But now it appears that it "cannot be".

CDS view entities do also generate a HANA view with the name of the CDS view entity. Hence, it is possible to access a view entity natively on HANA database. However, the same restrictions apply as described in note 2511210.

During migration will SAP keep name of the SAP provided extraction enabled CDS's views same? Or  names will change ?

Documentation regarding the migration will be released soon.

Nice.. thanks for sharing !!

due to some incompatible changes, it is unlikely that all of the existing views will be migrated

In our SAP CPI-DS project, we are using CDSs to create complex logic. In this way, we release CPI-DS system of making complex calculations that could take more than 15 minutes in CPI-DS (vs seconds in CDS).

However, CPI-DS can only consume the view (database layer).

Should we get worried about it? I am afraid "Unlikely" could mean a lot of things. Removing these views or making mandatory not using them could ruin other parallel projects that cannot call to a CDS directly .

Do you have information about it or who could clarify this point?

Thanks in advance,
David

how do you consume the CDS views? Do you use ABAP SQL? If yes, then you can use the CDS view entity directly, and not the DDIC view.

I am afraid SAP CPI-DS is not the best ETL tool in the market (but it's SAP recommendation when working with IBP).

It is only able to "see" tables or views at database level when connecting to a backend system. That means CDSs does not appear as a source object. However, we link the CDS view in CPI-DS and this is how we are working: generating complex SELECTs in CDS and linking them to CPI-DS through its view.

Please, we are not asking for a work around. We need just confirmation of the roadmap to know if we need to change our way of work.

Thanks in advance,
David

The classic, DDIC-based CDS views will still be supported. It is not planned to deprecate them. Both types of views will coexist.

You as owner of the view can decide whether you want to migrate your existing views to view entities or not. There won't be any automatic conversion.

You can continue creating classic CDS view, even when CDS view entities are available. SAP only recommends to switch to view entities, because once they are feature complete, they are easier to work with and offer more options.

Is it possible to extend the CDS Entity like we have for old CDS View?

Yes, it is possible to extend CDS view entities in the same way as CDS DDIC-based views.

i have few queries regarding the new CDS Entity-

is there a way i display the DDL Source in SAP SE11 directly other than by DDL SQL View?

i see VIEW for this object in DDLDEPENDENCY 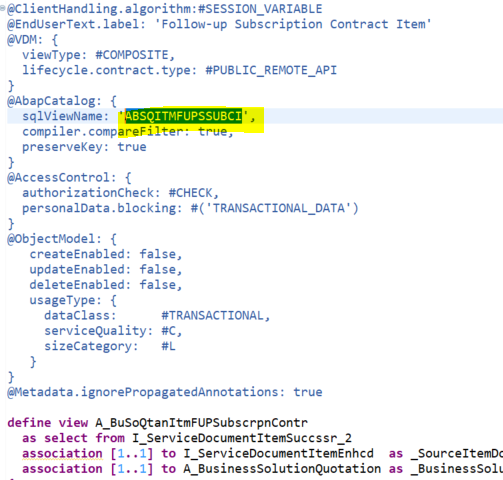 if you see there is an abap view for this 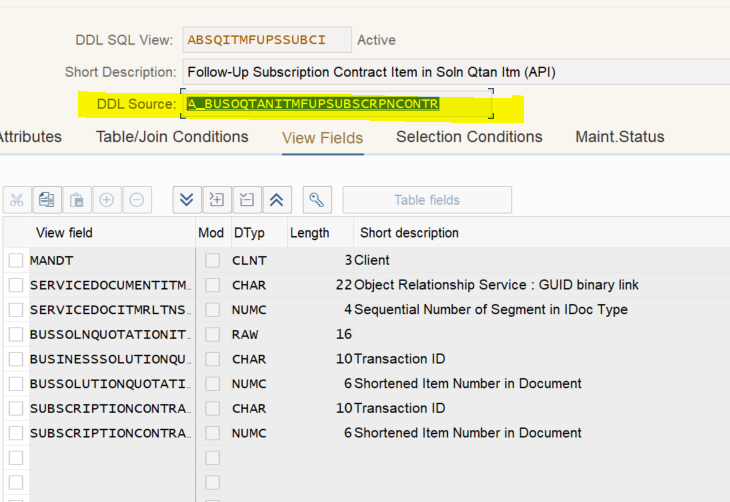 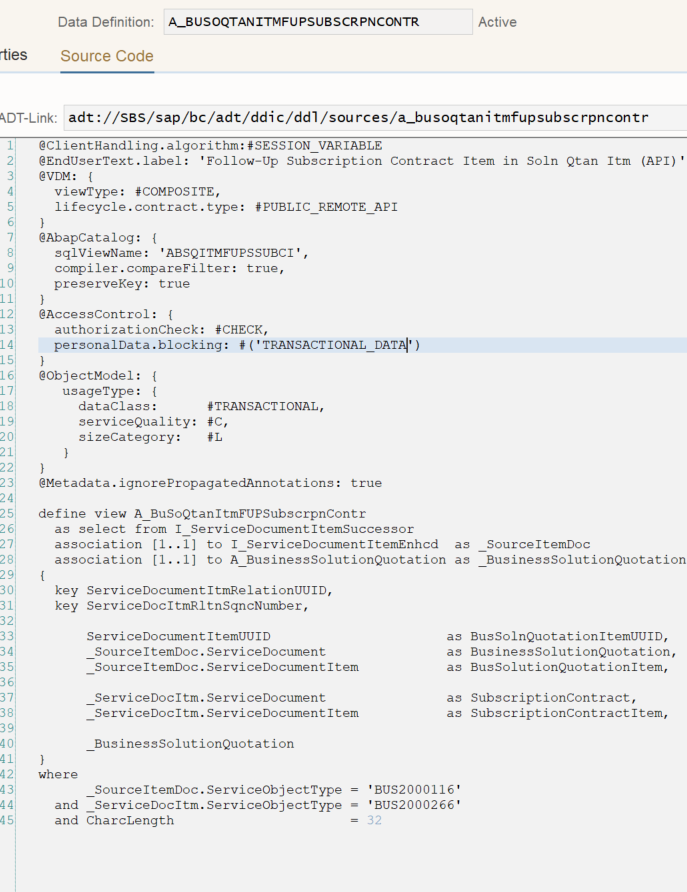 SE11 has limitations: views (classic views as well as CDS view entities) can only be displayed when their name has no more than 16 characters.
Moreover, it is not recommended to access a DDL source in SE11 using the SQL view (warning message).

Regarding your second question: The SQL view can contain an additional client field and therefore, an error message is returned. You can avoid it by using same name (either SQL view name OR DDL source name) for typing and after FROM.

You can also use an inline declaration, such as the following:

Hope this helps. If not, please contact me again.

Need some guidance in the light of CDS root view entity.

We are in S4 HANA 1909 SP02 on-prem version hosted on HEC. SAP_ABA is on 75E. SAP_BASIS is on 754.  Still, it is not giving an option to create CDS view entity. After upgrading the Eclipse version 2020-09, ADT, I somehow managed to get the CDS view entity option. However, when I am using the following code snippet to activate it, I am getting the error as 'Keyword Entity not Allowed'.

I am following the below blog:

Thanks for your help!

On BO Project View, "entity" worked fine.  Not sure why CDS view has issue.  BTW. I am using the developer edition 1909.

I tried to go through the given blog or help page you mentioned above but not sure how to co-relate ABAP release 7.55 with ABAP platform 1809,1909, 2020 etc or SAP_ABA 7.5D, E, F etc? if you could help us understanding this connection and where do we see ABAP release 7.55 etc in the system?

I just created my first CDS entity view. We had for regular cds view the tool "dependency  analyzer" in abap in eclipse. Now, If I try to use this tool, it says "dependency analyzer only support cds view"

Is there a similar tool for this?

Alternate question: for HANA studio, we could query the CDS view by using the DDIC name in the select. For entity view, there are no ddic. Would it be possible as well?

dependency analyzer is currently not available for CDS view entities. Development is working on it, hopefully it will be available soon. There's no alternative tool, unfortunately.

CDS view entities can be accessed in HANA Studio by their DDLS name (same as the entity name). Like for classic DDIC-based views, it might be required to specify the schema.

It's a while since we've got view entities at our disposal and to most case I found them fully functional. However recently I accidentally faced restriction to migrate CDS which includes $session in the conditional expression:

I was lucky to overcome this case with $parameters, though result is not as elegant as originally and generally this was unexpected obstacle for migration from legacy.

So my question would be - is there any reference of the restrictions (not supported syntax, pending features) associated to new view entities?

your conditional expression should work in CDS view entities. I've tested it and tried to reproduce the error, but in my example, there is no error message.

The topic about CASE WHEN in the ABAP Keyword Documentation lists all possible operands and it says the the right side of CASE WHEN can be a session variable.

So this looks like a bug, please open an incident to component BC-DWB-DIC if you would like this to be further investigated.

Thank you for quick answer! 🙂 Will follow as you advise. 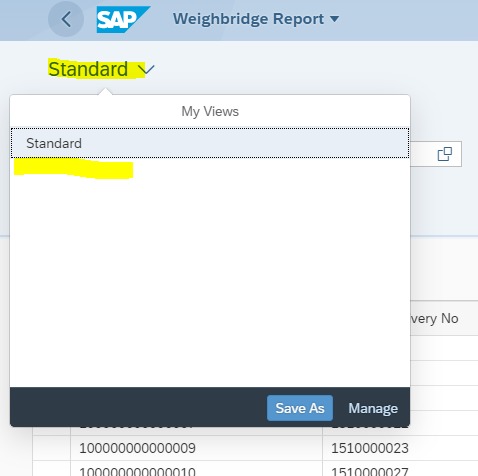 as far as I know, implementing variants is not possible using CDS annotations.

Ok thank you so much for your reply Andrea Schlotthauer ,

I tried to go through the given blog or help page you mentioned above but not sure how to co-relate ABAP release 7.55 with ABAP platform 1809,1909, 2020 etc or SAP_ABA 7.5D, E, F etc? if you could help us understanding this connection and where do we see ABAP release 7.55 etc in the system?

Regarding your second question:

Thanks for the details.

Regarding the second point, yes...I meant to ask ABAP release information in the system- I see only S4HANA release (Not the ABAP release 7.55). Here is the screenshot of what I see if I follow the steps System > Status > section SAP System Data > Product Version > tab Installed Product Version.

I was hoping to see ABAP release 7.55 somewhere directly in the system. But mapping table you provided (via help link) is also fine. Thanks!

How can I achieve using CAP annotations?

thanks for your message.

Hi Andrea Schlotthauer , Thank you so much for your reply

The syntax SELECT * to select all elements from the data source is supported in CDS DDIC-based views, but not in CDS view entities

we have S4HANA1909 so can't test above statement perhaps i just wanted to cross check if my understanding is correct or not.

yes, exactly, your understanding is correct.

SELECT * is not supported in CDS view entities. You need to formulate an explicit element list instead, like in your example above.