Evolution of ENSA2 and ERS2…

From ABAP Platform 1809, the Standalone Enqueue Server 2 (and Enqueue Replicator 2 for high-availability scenarios) is default installation.

So, lets understand, what is Standalone Enqueue Server 2 (ie. ENSA2)

Before understanding ENSA2, lets have a quick recap and understand BASIC concept
1. How SAP connection works
2. What is SPoF (Single Point of Failure)
3. What is ENSA1 (Standalone Enqueue Server), ERS (Enqueue replication Server) and HA setup

and these components connect each other to make successful connection.

What is SPoF (Single Point of Failure) –

A SPoF is a critical application component and if these are not available then this will become service outage for users.

ASCS (message server and enqueue server) and Database are critical components for business operations and helps for load balancing, licensing, lock management. If these components are not available, then SAP system will not be accessible for end-user and this will become service outage.
So, we need to protect them from SPoF (Single Point of failure). 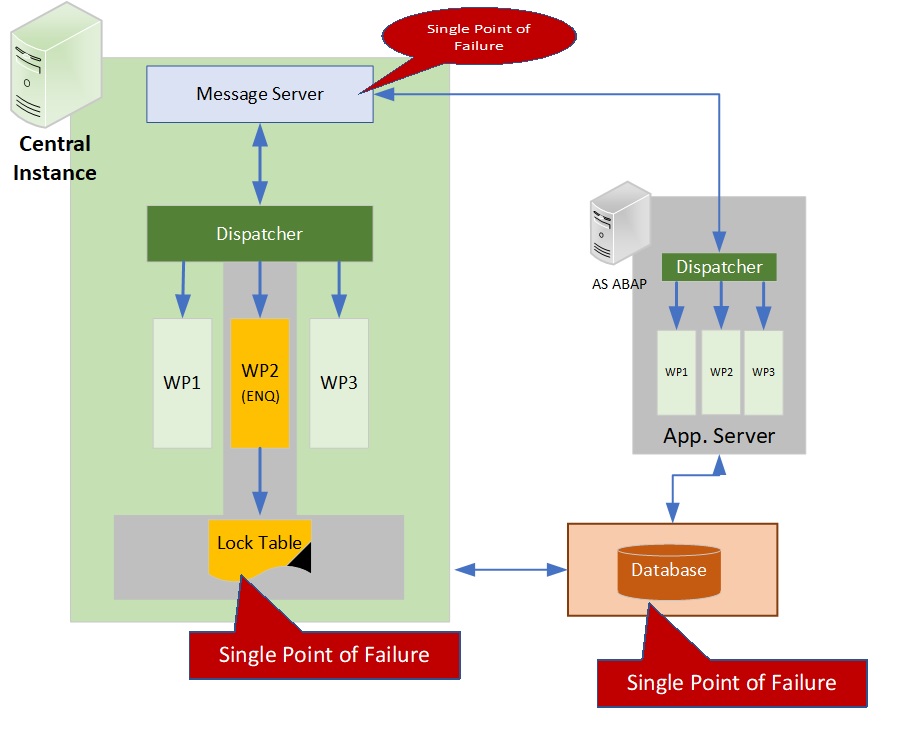 Instead of protecting whole Central Instance, we can split of enqueue server and let it run as a standalone server, called as ENSA1.

And protect the lock table with the help of replication, called as ERS.

Again, we need HA software to redirect connection to ERS host in case of failure. We will see in details, how this will work.

Lets understand in more details – How this works –

Connection between Standalone Enqueue Server and Application Server, though port sapdpXX (XX is instance no.).

Due to multi-threaded architecture of the standalone enqueue serve, enqueue request processing and synchronization of the lock table with the replication server can be carried out in parallel.

Now, what if one of the servers (enqueue or replication) fail due to any disaster.

It works as follows –

1. It can be restarted on a different host.

2. It retrieves the replication table from the standalone enqueue server when it restarts

Profile Parameters for the Enqueue Clients (AS ABAP) –

If you want to use the standalone enqueue server, you have to set the following parameters in the profile files of the enqueue clients (application server instances):

the parameter specifies the maximum time (in milliseconds) the client can block for when a connection is being set up.

If the connection cannot be established, the client waits for one second and then retries. Parameter enque/con_retries determines how often the attempts are repeated.

After the specified number of retries, the caller (the application) reports an error.

The entire wait time is therefore between

ENSA1 has some limitations –

The Standalone Enqueue Server 2 is the successor to the standalone enqueue server. It is a component of the SAP lock concept and manages the lock table. This principle ensures the consistency of data in an ABAP system. 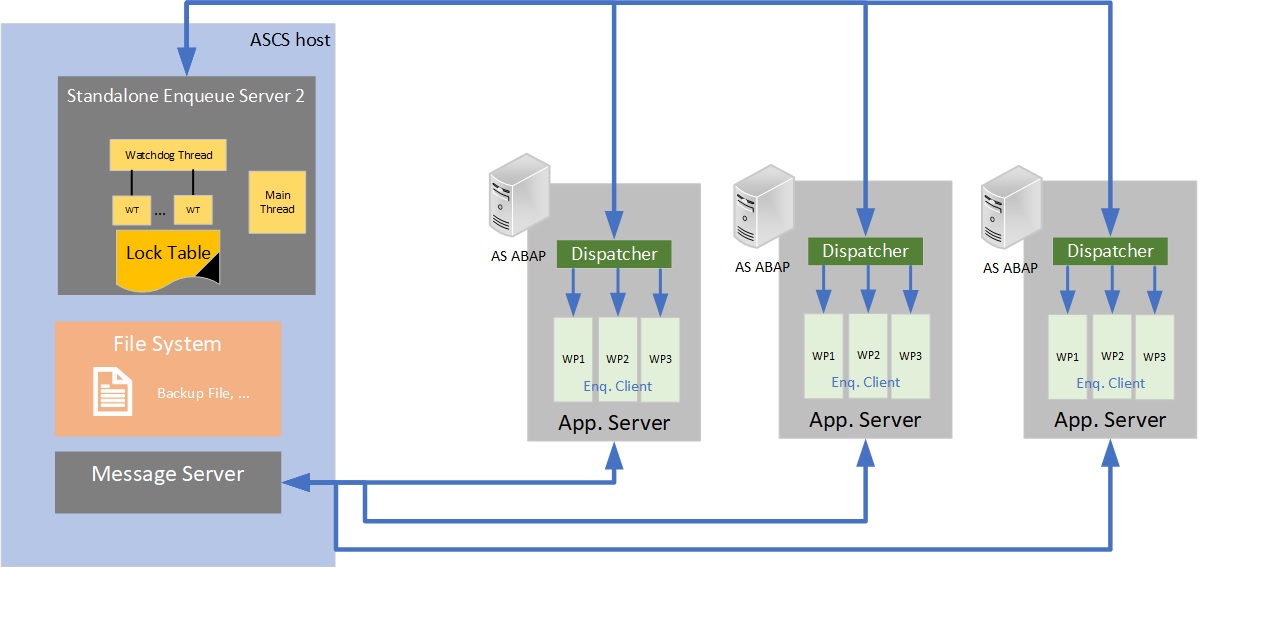 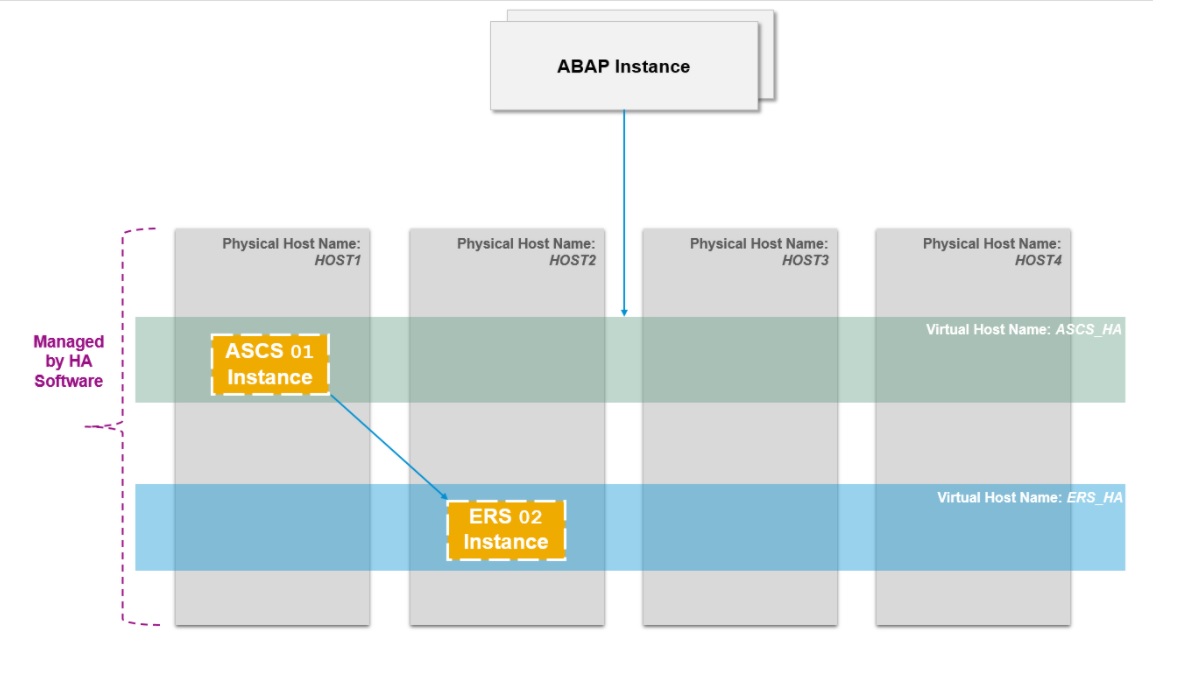 If Standalone Enqueue Server 2 that is running on HOST1 fails,

The old Standalone Enqueue Server was required to “follow” the Enqueue Replication Server. That is, the HA software had to start the ASCS instance on the host where the ERS instance is currently running.

2. The newly started Standalone Enqueue Server 2 then retrieves the replication table from the Enqueue Replicator 2 over the network and uses it as the lock table.

3. The HA software ensures that connection attempts from clients are automatically directed to the ASCS instance that is running on HOST3. If the Enqueue Replicator 2 that is running on HOST2 fails, 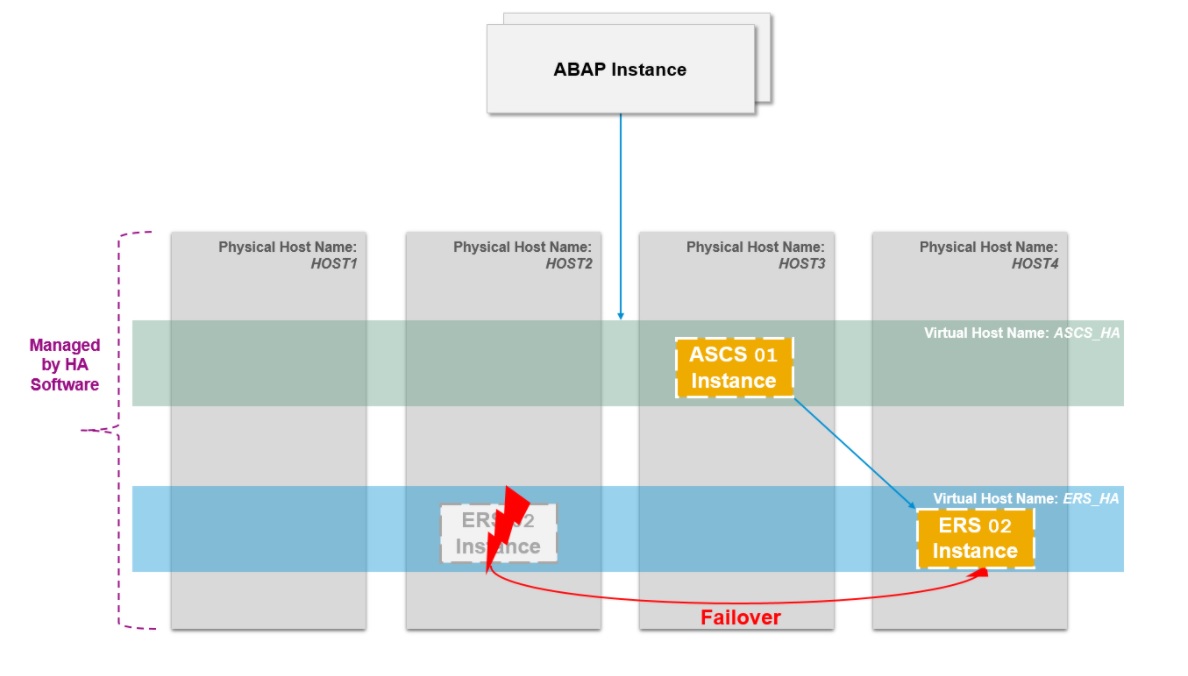 So, plan to “Split Off ASCS Instance From Existing Primary Application Server instance” if you have still Central Instance setup.