Recently I have been doing a lot of transport approval workflows. This started after being requested time after time to fill out a word approval form for transports – this form was sent by mail to approval and then to the basis team which does the actual transfer into the production system.

There were several problems caused by this:

I talked to my project manager at the time and deigned a simple form allowing the project members to fill out details about the transport request, for example: requested transport time, transport type (development request, error fix etc.) improvement request number, module, risk level etc. add long text describing the request and link the relevant transport, getting the transport data using RFC from the development system.

Another improvement was to exclude objects from the checks, if you are a workflow consultant and worked using some transport management system I’m sure you repeatedly had to say something like “No, SWOTICE is not a real dependency…” 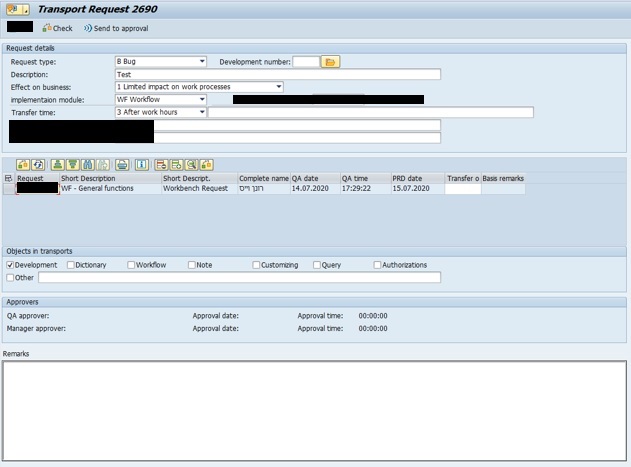 After filling out the form the user sends this request for approval which includes:

This process is working in several projects now and the best thing about this process is that I also get to use it myself! In some of the project this process was enlarged to include a development request data, links for adding documents to DMS, reports, more systems (gateway, BW etc.), approving requests for special users and more.

A few projects I am working in have started using SAP CHRAM on the solution manger, which give a built-in solution to some of the problems, maybe the next step will be to transfer this process to a CHRAM based workflow.