Blockchain for Applications ~ A Multi-Industry Solution 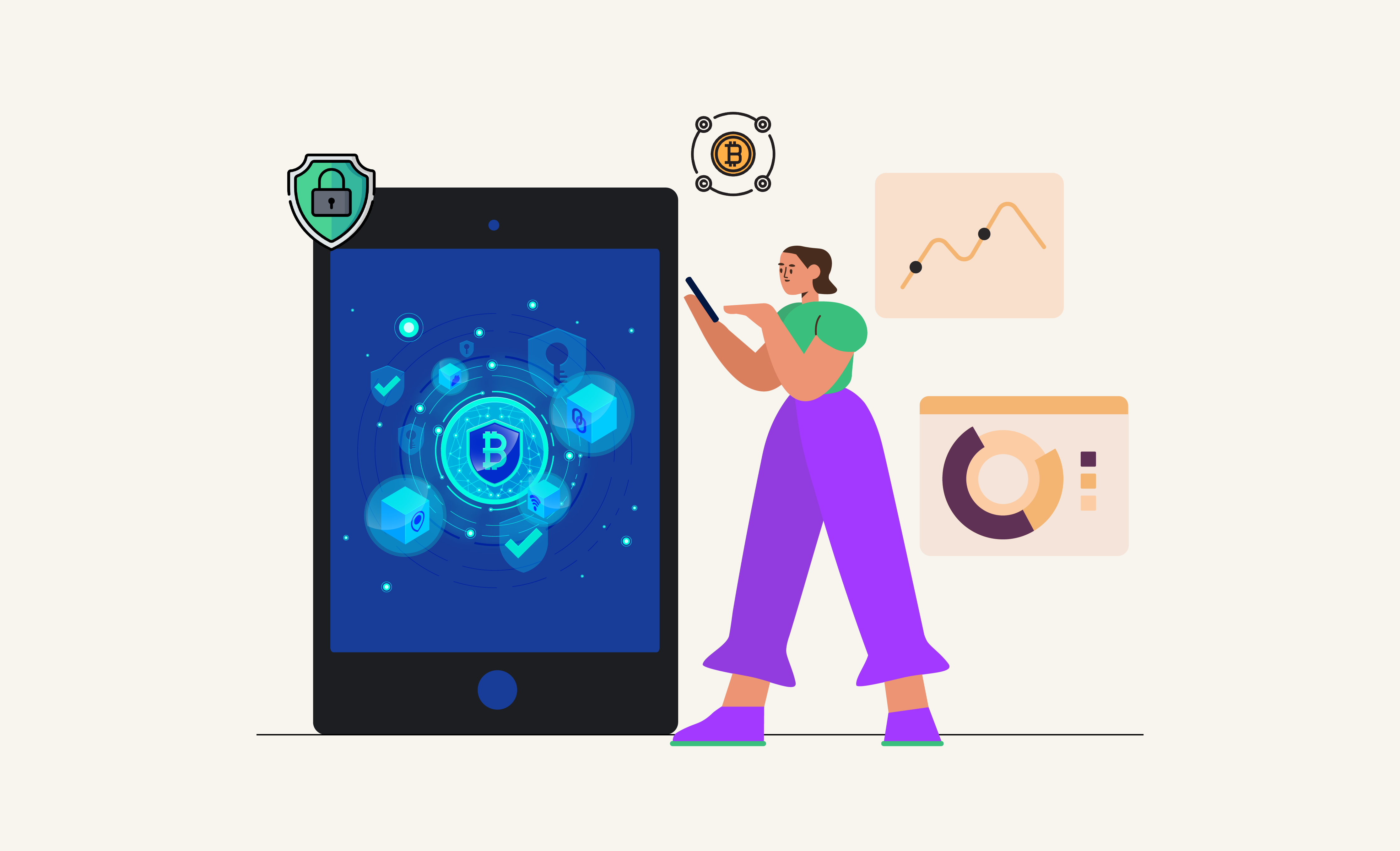 Article Summary- Blockchain has disrupted industries with its decentralized ledger, global reach and safer transactions. Blockchain apps are making the technology more accessible & easy to use.

Bitcoin revolutionized the game with block chain and proposed a thought experiment for people across industries. Can the structure of transactions, storage and security be completely remodeled?

Just the existence of this technology was enough evidence of its efficacy and groundbreaking success. Cryptocurrency was the first to take the bait, followed by banking and finance as a whole, and now it has evolved into a decentralized force of progress.

With no charted path, to begin with, it has crossed financial boundaries and has triggered a tsunami of connected links that continue to expand. Businesses have set up designated teams to create blockchain apps and reimagine the magic on phones.

How “Block-chains” bind and liberate

The workings of blockchain are somewhat common knowledge now. A decentralized network of interconnected links that share all data among its peers, keeping a chronological log of each transaction.

Hence, in a way these block-chains form a binding link with each other and through this decentralized model of information storage, it liberates from the risk & inefficiencies of having all data stored in one place only.

DApps or decentralized applications function without any central server to help interact with two parties. Blockchain users operate on mini-servers that work simultaneously to verify and exchange data.

A permissioned blockchain on the other hand requires authorization and doesn’t allow complete access to all members. This form of the network works best when there are hierarchies amongst users like an organization’s seniority structure.

The buzz around Blockchain apps & its major benefits

The application market is booming. From industry giants, startup dwarves, service providers, individual branding, and many more. When everybody is in the same game and chasing a similar prize i.e more users, brand loyalty, increased in-app time, paid subscriptions, then it becomes a challenge to create a unique experience.

This is the space that blockchain has capitalized on, a more secure communication, transparent design and credibility. Top 4 benefits of blockchain apps-

How to develop a Blockchain app?

Digital transformation has enveloped the consumer markets, inspiring a mindset of using the latest and best possible technology to cater to customers.

If shifting to blockchain technology is the right option then developing an application is the ideal way to reach customers & attract potential consumers.

Outsourcing the process to a company that specializes in app development could be a smart choice. Go through popular company listings on Clutch, AppDexa or GoodFirms to find one that fits the company’s budget, vision and design .

Understanding the existing trend in the blockchain app market can shed some light on the type of industries that can benefit the most from the technology. Let’s have a look at the multi-dimensional scope of blockchain technology and its growth in the coming years.

Any asset can be equipped with smart technology and the registered object can be saved on the network as a ledger with complete contract and ownership details.
This smart property is accessed by smart keys which are transferable upon successful transaction over the blockchain network.

The “property” in question can be a house, a vehicle, a patent or even company shares.

As per a research report by Gartner, more than 26 billion devices will be connected to the internet by the end of 2020.

Blockchain steps in to ensure these intimate things that will end up controlling home security systems, cars and all electronic objects accessed by us, remain safe and ward off potential security threats.

Blockchain with its ledger system ensures that only authenticated parties can transact with each other while maintaining meticulous records of all communication between each member. A perfect setting for IoT to flourish. The future of technology is fused with Blockchain & IoT, these 2 revolutionary concepts are crafting a utopian future.

Examples of a Blockchain App in IoT-

A cybersecurity company for IoT organizations. It’s currently responsible for the security of billions of devices that have the ability to self diagnose and fix any issues.

The system of borrowing & lending money is being reshaped to mimic a simple transaction without complicated credit reports & lengthy verification forms.

With smart contracts in play, ownership of collateral can be temporarily transferred in exchange for money. Smart property can be exchanged for money across the blockchain network and the recorded transaction, proof of exchange.

This makes it easier for low-credit holders to get loans from all over the world & does away with frivolous paperwork.

Blockchain originated to solve a financial problem and finance still remains its key area of success and revolution.

Blockchain disrupted the financial market by –

It is important to note that cryptocurrency proved that online payments should not be constrained by geographical boundaries because there are no boundaries online.
Before cryptocurrency, global transactions used to take days, cost a lot more and went through multiple channels before reaching its final destination.

Example of Blockchain in Fintech

This California based company has created an anti-money laundering platform with end to end encryption and a perfect log of communication. With its biometric system, ocular verifies individuals before they apply for government id’s licenses e.t.c.

Digital contracts with IFTTT code are smart contracts, they are like a checklist that triggers automatic action when all criteria are met. IFTTT- “if this, then that”

Blockchain is brilliant at using these smart contracts in simplifying the trade of seemingly complicated conditions. Handling insurance premiums, property agreements etc is made easy with these digital treaties.

The medical records of individuals demand a high level of privacy and security while being easily transferable between insurance companies & the hospital. Blockchain hits both these marks with ease.

Smart contracts take it a step further, surgery and treatment details can be auto-sent to the patient’s insurance company on completion and from the insurance to hospital/patient.

Example of Blockchain in Healthcare

This blockchain-based company lets patients and doctors transfer medical records safely. Smart contracts regulate what will be sent, to whom and when.

Ever since the installation of electronic voting machines, there have been constant claims of tampering and cheating by the losing party.

Blockchain ledger maintains encrypted information that would safeguard votes & the distributed network makes sure the votes aren’t consolidated till they need to be.

Accountability of elected candidates- Smart contracts can be used to hold the candidates accountable for their pre-election promises.

Example of Blockchain for Governments

A secure online voting platform using a digital ballot box powered by blockchain technology. It has created a secure voting system to increase confidence in the democratic process.

A mobile voting platform functioning on blockchain technology. A secure mobile app that allows remote voting to registered voters from anywhere in the world.

An encrypted digital identity card that keeps the identity safe by securing it from fraudulent schemes and scamsters.

Passport- In 2014, Github launched a blockchain-powered passport. Stored on the network ledger, given a public and private encoded key. This identity card is one example of highly sensitive data that can be safely used online.

Personal Certificates that prove the ownership of a financial instrument, a birth certificate, a wedding certificate among others can be recorded with ease through Blockchain ledger and its added encryption.

Example of Blockchain in Safeguarding Identity

A financial security company with a blockchain ecosystem. Users get in a smart contract for their data privacy and have an option to control who can view their personal information.
Any breach or attempt to access the user’s personal information alerts them immediately.

How to Align a blockchain app with Business operations?

There is little doubt about the efficacy of decentralized apps but it is important to identify which areas can benefit from the blockchain.

If the target audience of the company is open to a new means of transaction, then cryptocurrency can be integrated in no time. These transactions can be auto-tracked and easily initiated with an app.

There are multiple tangents in supply chain management depending on the company’s core operations. In scenarios of numerous dependencies and intricate connections, blockchain shines.

Decentralized storage reduces the load on one device resulting in increased speed and refined user experience. Another plus point about blockchain storage is easy access to data because of cloud storage.

If a company relies heavily on safeguarding the important financial and personal information of customers then it is legally obligated for safety. Blockchain’s encrypted ledger & decentralized storage is perfect for privacy & security.

Blockchain provides great control over access. Companies that operate on varying levels of access and usage can control authentication with a permissioned blockchain.

The examples, benefits and uses of blockchain as a technology and for mobile applications are plenty. The real question is whether it can be aligned with the company’s operations, objectives and long term direction. Entering into the blockchain space right now, could help any company in establishing itself in the industry and re-shuffling the market pie.