“To Be Hired” Status Adaptation

The “to be hired” field on the position object is a very important field in position management. It indicates whether the position is vacant or not. This field can be relabeled to the customer’s preference. Based on the selection made from position management settings, only positions that have “to be hired” status as yes will show during a new hire, promotion, transfer or position change process. Now let’s discuss the first two “to be hired “settings under the General tab. The drop-down values for the below highlighted options are “Never, Always and Only if Current FTE value is below planned value”. 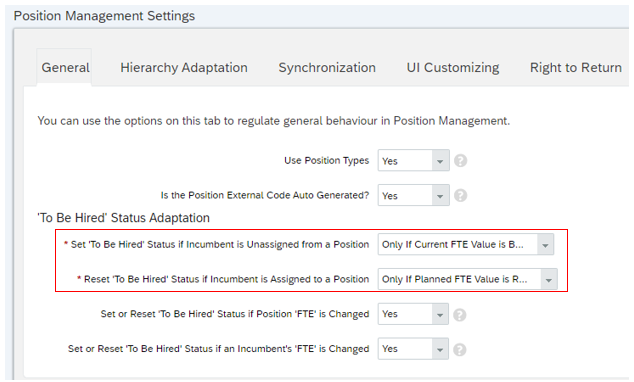 If this option is set to “always”, the “to be hired” status will be automatically set to yes whenever the occupant of the position is terminated, transferred or promoted to a different position. The “to be hired” field resetting to yes means that the position has become vacant. Depending on other additional position management settings, this vacant position will become available for selection in job information “take action” during hire, rehire, promotion, transfers etc. 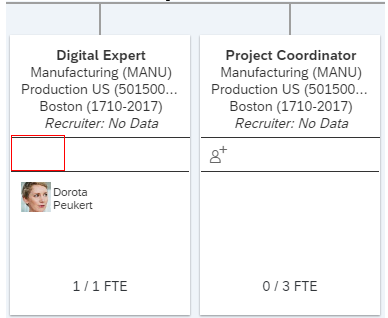 Screenshot 2- Dorota’s position automatically becomes vacant once she is moved into another position. 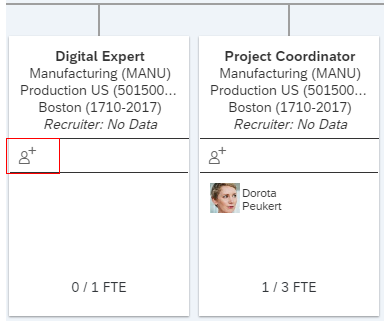 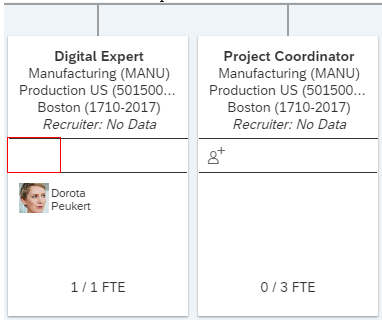 Screenshot 2– Dorota’s position still shows as not vacant even when she has been moved to another position. 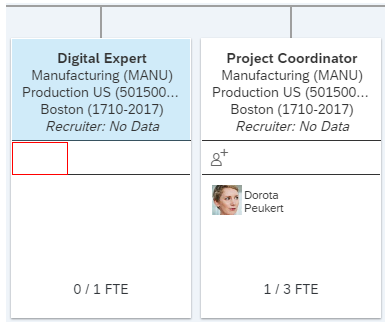 Screenshot 1- The digital consultant position requires 1 FTE and Gus is a full time employee with 1 FTE so the position shows as not vacant. 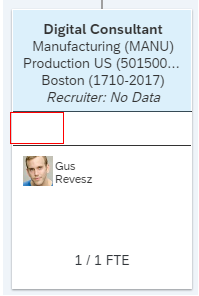 Screenshot 3 – His position now shows as vacant due to the reduction in FTE. 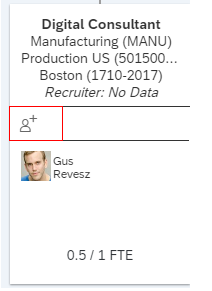 This setting is very similar to the above only that this has to do with “assignment to” the position. Selecting “Never” for this option is to say that regardless of whether someone is transferred, promoted, hired or rehired into a new or existing position, the vacancy (to be hired) status of the position should stay the same as it was before the employee was moved into the position. In effect what this means is that if position A is vacant and we hire employee A into position A, position A should still show as vacant. The downside of this is that, if you have selected yes for the “ Allow Selection Only of Positions That Have Status ‘To Be Hired’ in MSS Job Information and Hire” under UI customizing in position management settings, this position although not vacant will keep showing up together with vacant positions when you go looking for a vacant position to transfer or promote someone into. Imagine having to sort through hundreds of positions just to find one that is truly vacant.

Selecting “Always” for this setting will ensure that anytime someone is hired into a vacant position, the to be hired status is set to “no” making it a non vacant position. Again, depending on what other settings you have chosen, this non vacant position will either be available for selection in job information or not. 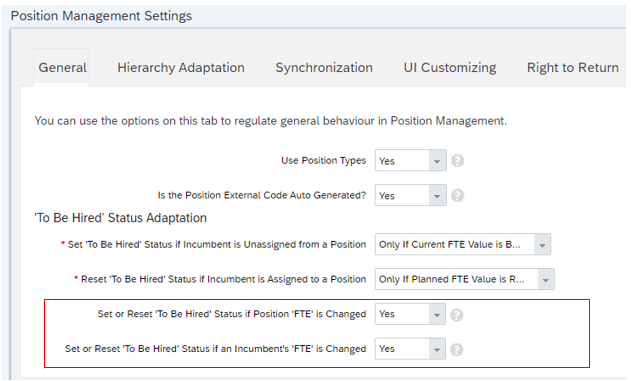 The drop down values here are yes or no with yes indicating that the position should become vacant once the FTE is changed either from the employees’ job information or directly from the position org chart. The below scenario shows Jada’s position which initially had 1 FTE. Due to the fact that I have set the “set or reset “to be hired” status if position FTE is changed” to Yes, Jada’s position became vacant once I changed the FTE value in position from 1 to 2. 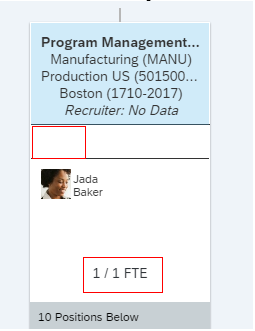 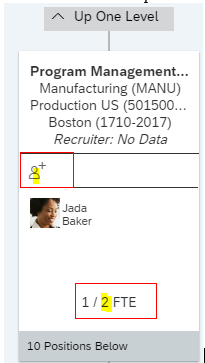 Note: It makes process sense to make changes to an employee’s standard weekly hours in their job information which automatically alters the FTE (with the help of a simple rule) instead of making the change directly to the employees position unless the purpose of this exercise is to increase the FTE on the position so that multiple employees can be assigned to it.

I just wanted to highlight a very important setting on “Hierarchy Adaptation” tab that enhances the termination process once position management is implemented. During the termination of a Manager, you get a couple of options based on which drop down value you select in the highlighted section below. The dropdown values are “No, Yes-Optional and Yes-Always’. 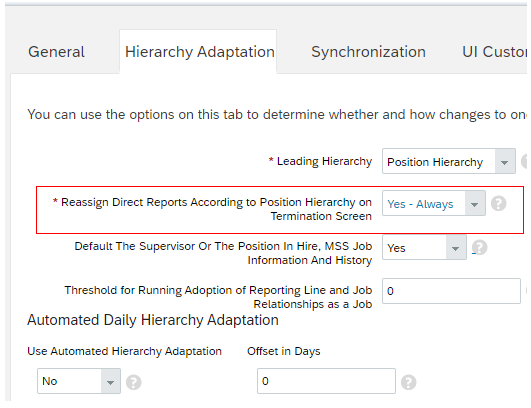 Yes – Optional gives you four options during a manager termination with the highlighted value “Everyone according to position hierarchy” as the default. 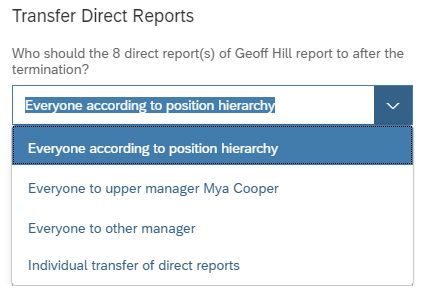 When you select “No” for this setting, you will only get three options during manager termination with the highlighted “Everyone to upper manager…” as the default value. 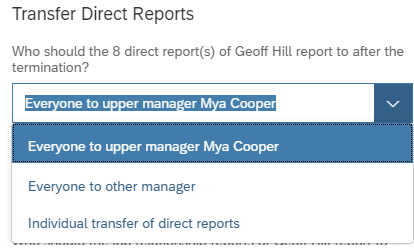 When the “use company filter” setting under “UI Customizing tab” is checked as a yes, only positions found in an employee’s legal entity can be searched for and seen once a manager or HR goes to do a promotion or transfer via job information “take action”. Most companies like to go with this option to keep things clean and simple. Others do not because they have intercompany transfer scenarios which they will like to capture without resorting to the implementation of global assignment. Your client has to decide on which option makes business sense. 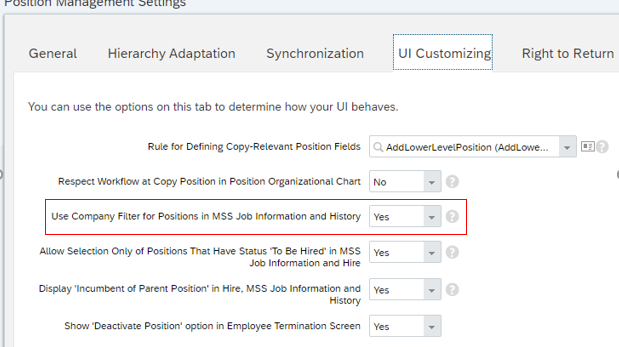 One of the use cases for transition period is when for instance an employee has given his/her resignation notice and your client will prefer to hire a replacement into the exact same position without creating a new one. In this case both the outgoing employee and incoming employee will occupy the same position while the incoming employee understudies the outgoing employee for a period of three months (as per the period and unit given in the below screenshots). To be able to assign these two employees in one position, the position should have the multiple incumbent field/mass position set to yes on the position object.

Have you thought about adding contextual  info on the business scenarios around these settings? For example, a scenario where to be hired = never might be advantageous, or not using position as the leading hierarchy?

Hi Phil, thanks for your comment. When implementing position management, it is imperative that position will be the leading hierarchy. A company can choose to go with the “never” option if they are in the habit of hiring multiple workers (summer workers for a retail store) in the same position and they want the positions to always show as vacant, this way the position will be available during the hire of another temporary employee. My clients have typically gone with the always option since they are easily able to spot which positions are vacant and which ones are not in the position org chart. Also in case of an org structure clean up especially for companies who do not re-purpose their positions, it is very easy to spot which positions are already filled and which ones needs to be deactivated. Hope this was helpful, thanks.

wish you can continue.

Thanks for this relevant information. Do you have an idea why some of these options are missing under position settings? The To Be Hire Adaptation is missing in my instance.