The former resource-related billing in SAP S/4HANA Cloud has been in place for several years, so there was the need to address not only feedback from customers and partners, but also holistically solve fundamental requirements. To give an example, the underlying source selection and material determination in the DIP Profile is not open to customers for customizing due to several reasons. This limits the number of activity types and sales/billing materials that can be used in the professional services scenario to the pre-delivered ones T001-T020, U001-U010 and E001-E040.

To overcome this problem and other restrictions, a completely new architecture for the billing preparation process was built. The key benefits of the new Project Billing solution are the following:

The delivery of the new Project Billing functionality is enabled through the scope item 4E9 “Project Billing – Project-Based Services”. Next to DE and US, this scope item is relevant for all standard countries or regions except Brazil. Further information can be found on the SAP Best Practices Explorer.

Starting from SAP S/4HANA Cloud 2108, scope item 4E9 is delivered as standard scope item, which means that it is activated by default in all new customer systems. For existing brownfield landscapes, customers need to request for its activation specifically. The old billing solution (Business Catalog SAP_PSP_BC_PRJ_BILLING_PC with the applications Release Billing Proposals, Edit Billing Request and Release Billing Requests) is accordingly deprecated since 2108. However, the old billing solution is by implication still the default solution for the billing preparation process in the professional services scenario. Starting from SAP S/4HANA Cloud 2111, the new Project Billing solution will be the default solution. As both solutions can exist in parallel without impacting the existing billing process, customers can test the new Project Billing solution in a dedicated sandbox tenant or their quality system before moving to the new solution in a phased approach.

This chapter should give a short overview and some background information on the existing functionalities of our new Project Billing. For further details please also see the documentation on the SAP Help Portal. When billing for a “Time and Expense” billing element is prepared, one or more postings can be fully or partially written off or postponed to the next billing cycle. Technically, these actions are saved in an own object called “Project Billing Request”. Compared to the existing billing solution, this allows the introduction of certain functionalities in the future (e.g. integration to the central approval framework). Additionally, it is possible to bring back formerly written off items, which means a restoration of written-off items that were part of Billing Document Requests created earlier (see SAP Help Portal).

As mentioned above, a central capability of our new Project Billing is the possibility to configure a flexible material determination. The new Self Service Configuration User Interface (SSCUI) includes a configuration step for making settings related to maintaining the Project Billing Profile in the “Manage Your Solution” app. That way a configuration expert can define which billing materials are determined for incoming costs or quantities on certain activity types or materials. 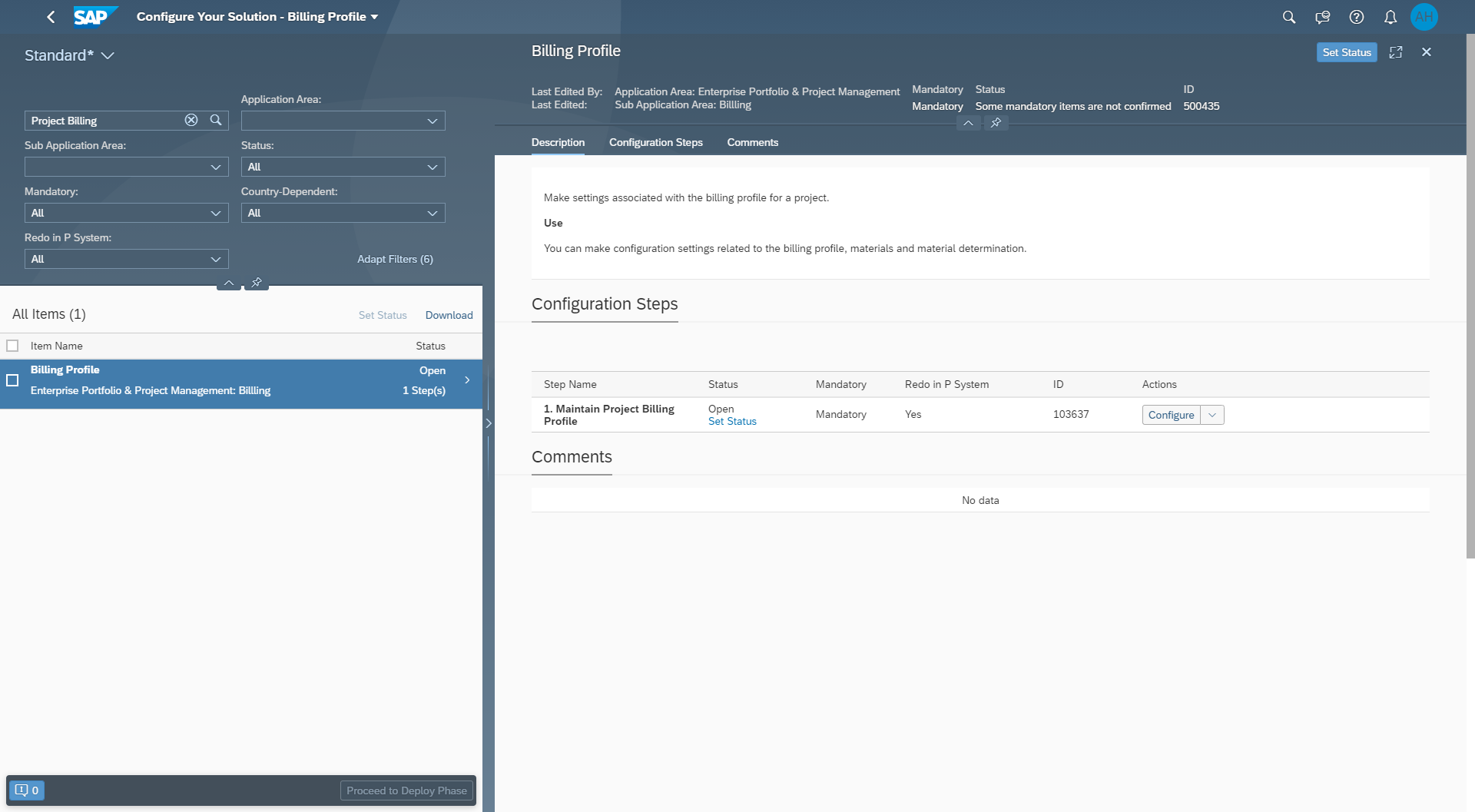 To give an example, the below table shows how activity type T001 (Junior Consultant) is mapped to billing material T001 (Junior Consultant) in a Time and Expense scenario. The Project Billing profile CMPRJBL001 as well as the cost element group YBPS_BILL are fixed. The first line covers the scenario in which the activity type is available from the posting. The second one relates to the contingent worker scenario, for which only the material is given.

The second application that is delivered besides the “Manage Project Billing” app is the application job “Schedule Repricing for Projects”. Due to the architectural change explained above (push instead of pull principle) and the fact that repricing is not run each time the “Manage Project Billing” app is used, the billing data needs to be updated when there is a change of the sales rate or material configuration. Compared to the old DIP run, this application job can be scheduled at the customer’s own discretion. For further details please also see the documentation on the SAP Help Portal.

The third application is again an application job called “Schedule Project Billing Preparation”. It allows customers to automate their billing processes through automatic creation of Billing Document Requests for different billing methods. The process definition can be narrowed based on different criteria. For further details please also see the documentation on the SAP Help Portal.

Scope item 4E9 does not only include the business role template “Billing Specialist – Projects” and the business catalog “Project Systems – Project Billing”, but also a switch on the information tab of the Plan Customer Projects app. The default setting of this flag is set to No until SAP S/4HANA Cloud 2108, which means that the old billing solution is used. Starting from 2111 release, the flag will be set to Yes by default which means that the new Project Billing solution will be the default solution.

The flag can be changed for single projects as long as the project is in planning stage. Once the project stage is set to Contract Preparation, this decision can no longer be changed. Additionally, the flag can be removed from the UI using the key user functionality for adapting UIs. 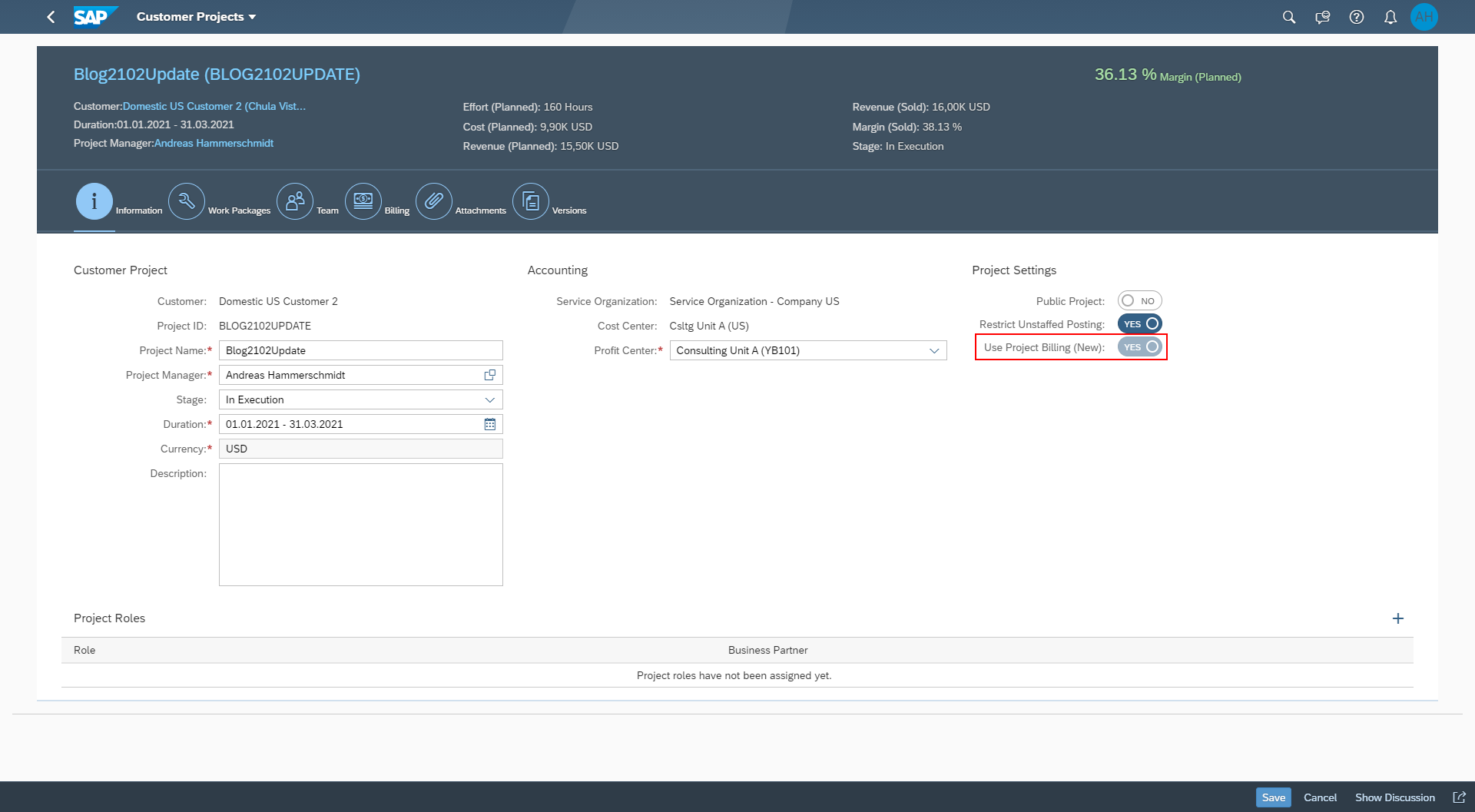 There are in principle two ways how billing elements in the “Manage Project Billing” app are shown. The first one is based on the authorizations maintained on the business role, which means that for example a central billing team can be allowed access to all billing elements in one or more specific service organizations. The second one is based on assignments in the project or rather sales order. This access is designed on the billing item level: If a user is assigned in any partner function on sales order item level, the according billing element would be shown. If the assignment is on sales order header or accordingly project level, all billing elements for that project would be accessible. The filter that uses this logic in the “Manage Project Billing” app is My Billing Elements.

The following features are currently planned as part of our roadmap. This list is not intended to be exhaustive, please see also SAP Road Map Explorer.

For more information on the new Project Billing SAP S/4HANA Cloud, check out the following links:

Concerning the new Billing Document Requests, will they be affected by the same modification constraints as DMRs?

The impossibility to edit basic elements such as the Customer Purchase Order Reference currently forces users to perform rather time-consuming and annoying operations to satisfy the requirements of customers in terms of reference information to be output in the printouts and in the XML eInvoices.

Thanks a lot for your comment. Your assumption is correct, modifications on Billing Document Requests are not supported. Please leverage on the functionality given in the Preliminary Billing Document, where for example the Header Texts can be added or changed. This document is exactly designed for your described business scenario, in which a customer upfront can receive and agree on a preliminary invoice and changes can be done if needed. Please keep in mind that the Customer Reference from the Sales Order is not changeable in the billing process at all.