This blog will show you how to ingest stream(unbounded) data into SAP HANA in a fault-tolerant way using SAP Data Intelligence. We will start from a simple solution and improve it gradually until the processing meets the demand of our expectation.

The below figure shows a simple example pipeline graph provided by SAP Data Intelligence. The “Data Generator” operator produces sensor data as a CSV string message. The message is loaded into SAP HANA and in parallel sent to a terminal, which you can use to see the generated data.

It looks good for a demonstration purpose. However, in reality we cannot take the assumption that everything works just fine in a distributed environment. The pipeline execution might be dead if something unexpected occurred. For example, what if there is a temporal network partition and the HANA Client connection timeout? We need our pipeline executed in a fault-tolerant way：

Next, we will look at how to improve the pipeline to address these issues.

To decouple the message producers from the message consumers, the data should be persisted somewhere.

Modify the graph to add Kafka into the pipeline graph. This time we want to place the message producer and the message consumer into two separate graphs as we do not want to stop the producer when the consumer graph failed.

Now we can start the producer graph to generate messages.

For debugging and testing purpose, I added more operators into the consumer graph:

Next we want to see what kind of fault-tolerant message delivery guarantees the pipeline can provide and their implication on maintaining the integrity of a data system in the face of faults.

3.1. At most once delivery guarantee

Configure “Kafka consumer” operator like the below figure illustrated: 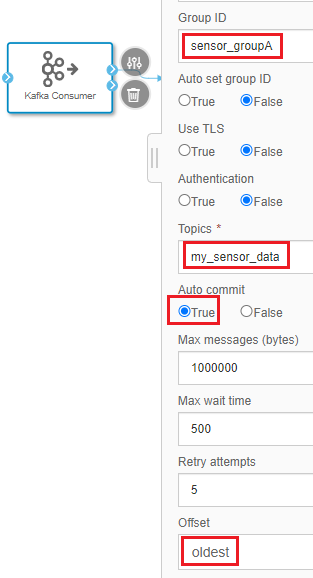 Run the graph. After a few moment, enter something into the terminal window like below to send a termination signal to the downstream operator:

After the pipeline graph dead, check the HANA Database table to verify the ingested data:

We can see there are five messages have been successfully ingested. The COUNTER field is attached by the “Data Generator” indicating the message offset upon message generation. It is a monotonically increasing sequence number. It is very useful we will see in later section.

Now try to recover the pipeline execution by restating the graph and repeat above steps and observe the result. To save space, I record the output offset ranges for each run in below table:

From this table, we can see that some messages are lost between the two runs. SAP HANA table lose messages at offset 5, 6, and 7. In this case, we say the pipeline only processing each message at most once. This is not a fault-tolerant stream processing.

Now let’s see if we can improve this guarantee.

3.2. At least once delivery guarantee

From above discussion, we can see the reason for the message lost is that the message offset picked in the second run is not correct. The behavior of the Auto Commit default option of the Kafka consumer operator did not reflect the actual offset position SAP HANA table consumed.

To fix this problem, the “Wiretap” operator needs to explicitly tell Kafka when it has finished processing a message instead of relying on the Auto Commit behavior. We do not want the message offset in the Kafka topic partition get committed without Kafka receiving an acknowledgment. The acknowledgment effectively keeps the committed offset of the Kafka topic partition in sync with Wiretap operator message consumption offset.

Fortunately, we can implement this simply by connecting the output the “Wiretap” operator to the input port of the “Kafka Consumer operator” like the below figure illustrated:

Also, change the “Kafka Consumer” operator configuration like below: 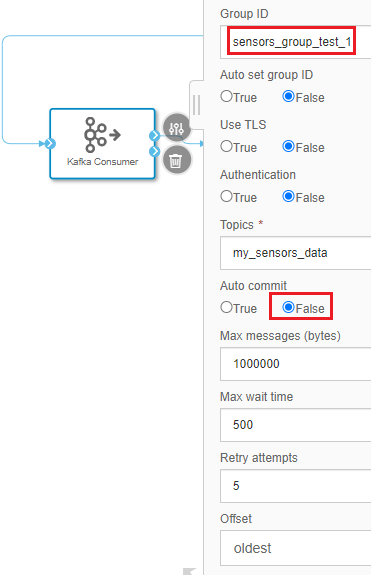 We changed the “Auto Commit” option from “True” to “False”.

Note that “Group ID” configuration also has been changed, this actually makes the consumer a brand new consumer for the same Kafka topic partition. Thus, the committed offset for this new consumer is at the beginning of the partition. This is a huge benefit Kafka provides since we can testing new idea very easily by adding a new consumer.

Now repeat the same steps like we did before. I record the output offset ranges in the below table:

We can see this time the SAP HANA table did not lose any message. But the message at offset 5 was processed twice. Kafka did not receive the acknowledgment for the message at offset 5 SAP HANA table consumed because the pipeline execution failed before that acknowledgment sent. Actually, the graph already failed before that message sent to the Wiretap operator. Thus, Kafka will send that message again when the graph restarted.

In this case, we say the pipeline processing every message at least once. This is not a fault-tolerant stream processing as well since duplicated message processing may cause data corruption in some cases. For example, in the data integration scenario I mentioned in blog, if the derived systems processing message twice, it will most likely cause the source system and the derive systems permanently inconsistent.

Next, we will discuss how to improve this guarantee by doing duplicate message suppression.

An effective approach is to make the operation idempotent to ensure that it has the same effect, no matter whether it is executed once or multiple times. Solving the problem requires an end-to-end solution: we need an operation identifier that is passed all the way from the producer to the database.

In our case, we do not want the message at offset 5 inserted into the SAP HANA table twice. Thus, we need to make the insert operation idempotent.

One solution is to change the insert mode of the SAP HANA Client to “UPSERT” and for that create primary keys on the SAP HANA table. Now the question is how to choose or generate an identifier as the primary key for that table.

Recall that we mentioned earlier that the message has a field named COUNTER which is a monotonically increasing sequence number. It actually uniquely identifies a message. So it is a natural fit for primary key in this case.

Now let’s try to implement the idea by taking the following steps:

I record the output offset ranges in below table:

We can see that this time the messages are processed exactly once! 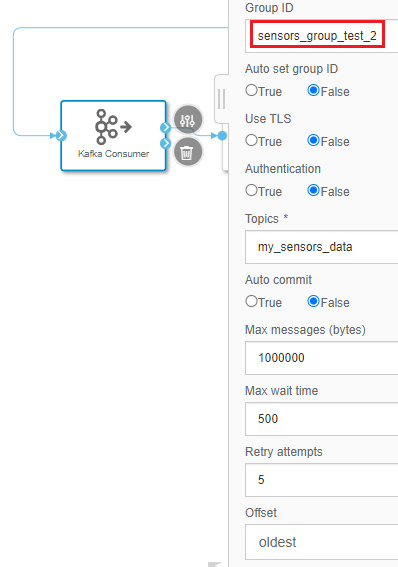