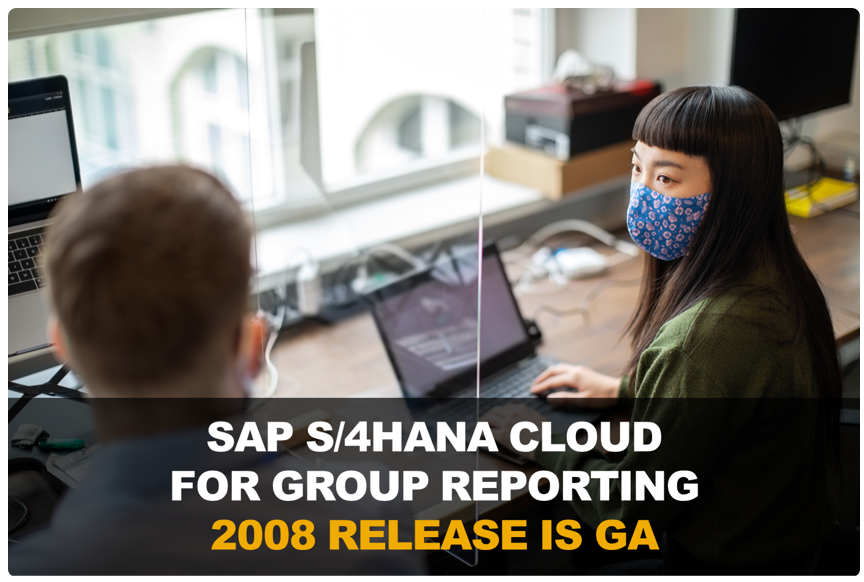 We in SAP Product Engineering are pleased to announce SAP S/4HANA Cloud for group reporting 2008 release was made generally available on July 29, 2020. We’re continuing our development focus on SAP’s new strategic software for consolidation, and the 2008 release delivers on new features as well as function improvements to help you run the group reporting process.

—
Integration of Intercompany Matching and Reconciliation (ICMR) with consolidation eliminations
— 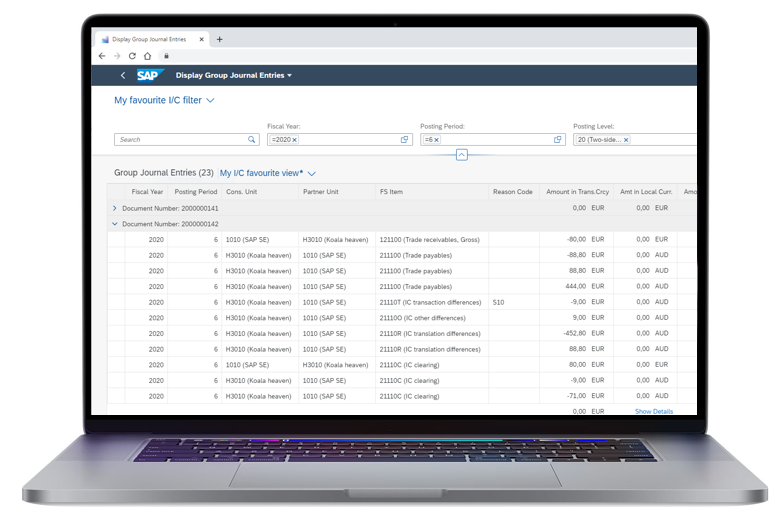 In SAP S/4HANA Cloud for group reporting 2008 release, we further integrate our Intercompany Matching and Reconciliation (ICMR) app in the consolidation process. ICMR is developed to help you to speed up your intercompany reconciliation process from company close to corporate close. By defining flexible matching and reconciliation rules, you can achieve high degrees of automation and continuous accounting. In addition, its in-app communication and workflow features eliminate the latencies very often seen in dealing with intercompany discrepancies, and, at the same time, improve visibility and transparency of your reconciliation process. With our 2008 release, we both enhance ICMR and integrate the app more tightly with the consolidation elimination in SAP S/4HANA Cloud for group reporting. 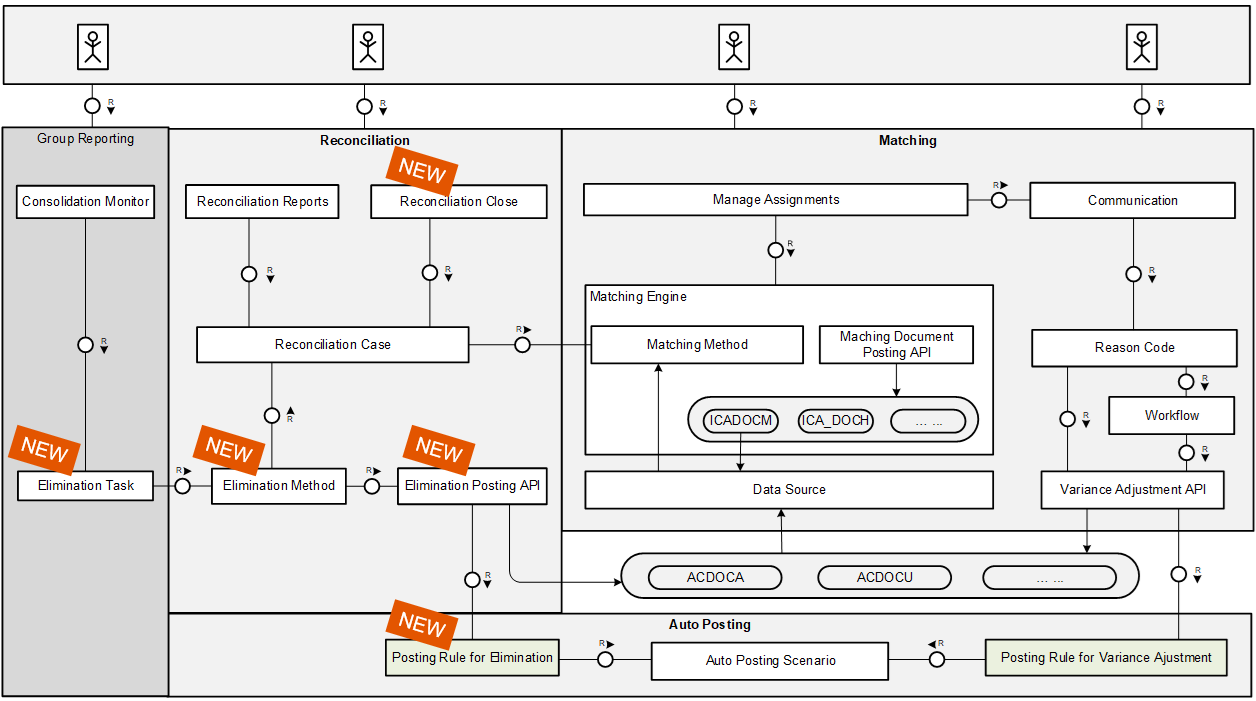 As depicted in the architecture diagram above, ICMR contains 3 modules: Matching, Reconciliation, and Automatic Posting. Matching deals with transactional-level matching and Reconciliation presents an aggregation-level view. The two modules together can analyze, process, and present two sets of data on an aggregated and line item level. The last module Auto Posting provides an additional function for variance adjustment, accrual postings, or elimination postings. The Matching Engine was built for processing large data volumes efficiently and quickly. It can directly access any data source, like Universal Journal Entries. In the 2008 release we further integrate ICMR with our Group Reporting consolidation via new Elimination tasks, Elimination methods, Elimination posting API and Posting rule for elimination. 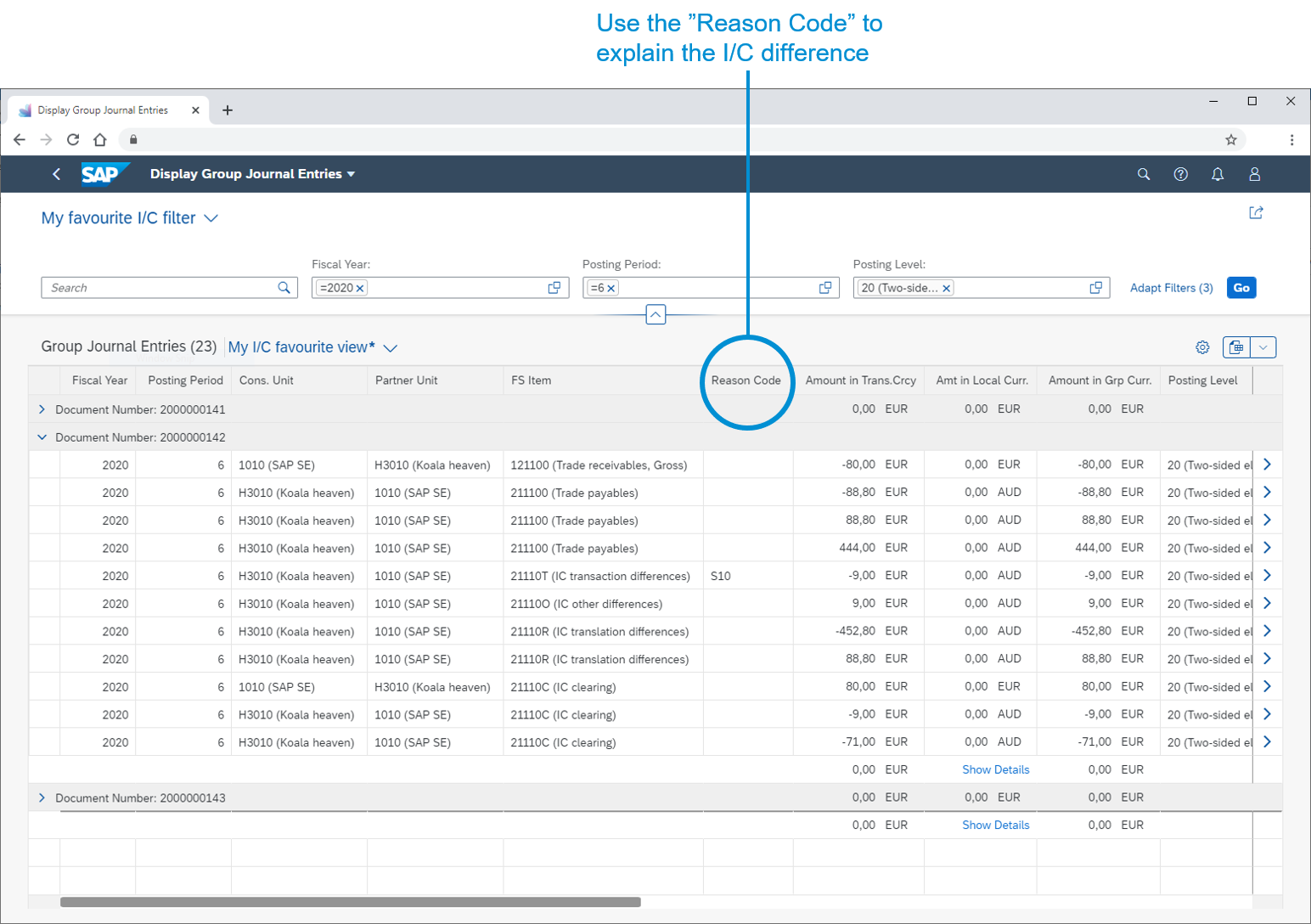 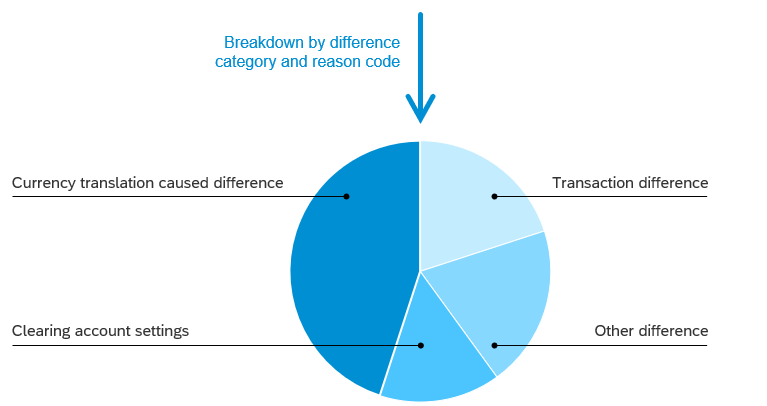 When using the breakdown by difference category and reason code (see screenshot above) it’s now easier for you to analyse the difference in I/C elimination posting. We provide 4 categories of line items that can be generated: Transaction difference, Currency translation caused difference, Clearing account settings and Other difference.

Our new “Define Posting Rules – Intercompany Matching and Reconciliation” app (see screenshot above) enables you to flexibly define ICMR-triggered rules as well as how the automatic postings should be generated for a specific posting scenario. With this app, you can decide on which party the difference should be posted. 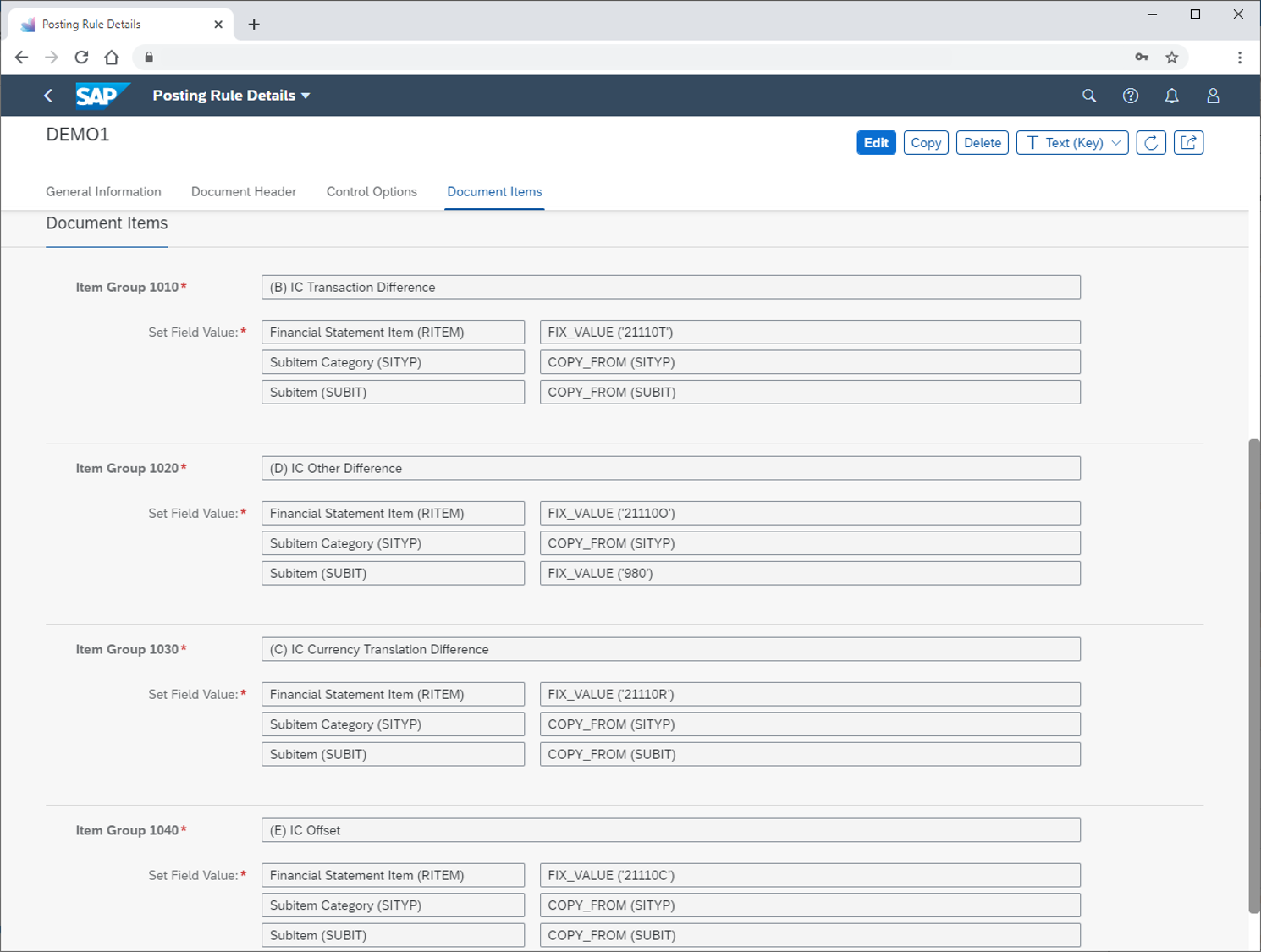 With the 2008 release, we deliver a new “Manage Reconciliation Close” app (see the GIF above) to help you set reconciliation close status, view reconciliation differences by reason code, and generate reconciliation statement for your specified unit pairs and period. The app delivers on the following features:

Other new and enhanced features

In the 2008 release the following other new and enhanced I/C related features are delivered:

With SAP S/4HANA Cloud for group reporting release 2008, new activities are available in the Consolidation of Investments to help you handle mergers, both vertical and horizontal. 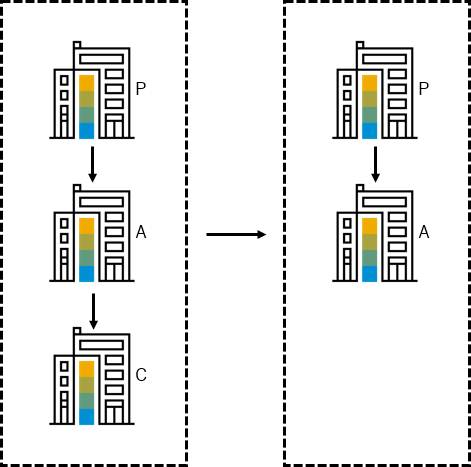 The following is valid for both vertical and horizontal mergers. First, select the ceding consolidation unit in the “Manage Consolidation Group Structure” app. You can specify the year and period of the merger as the point in time of the total divestiture for the ceding company, as shown in the GIF below.

For a vertical merger:

For a horizontal merger: 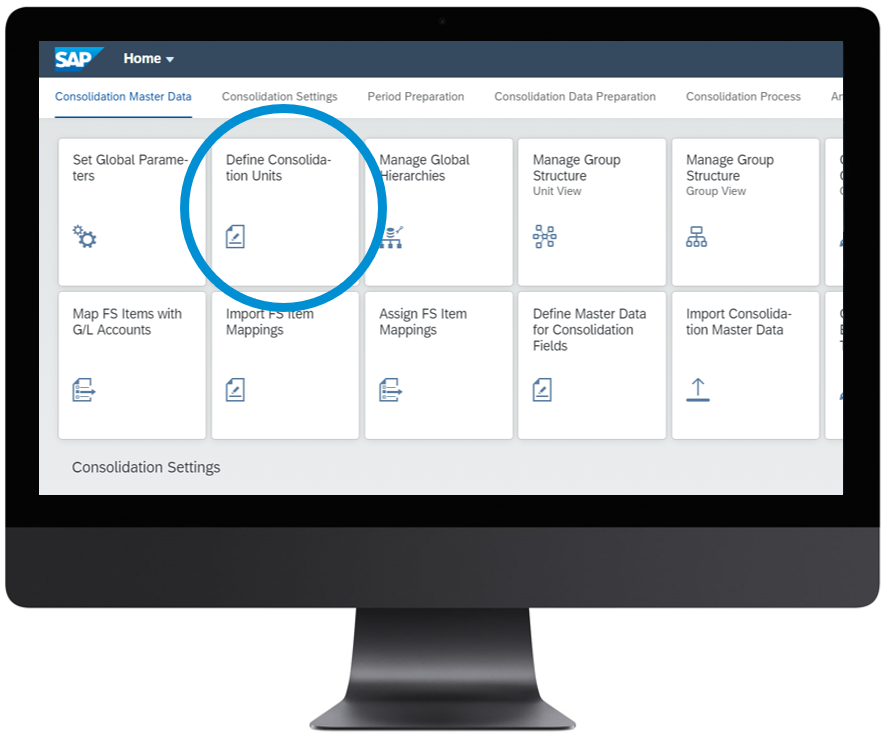 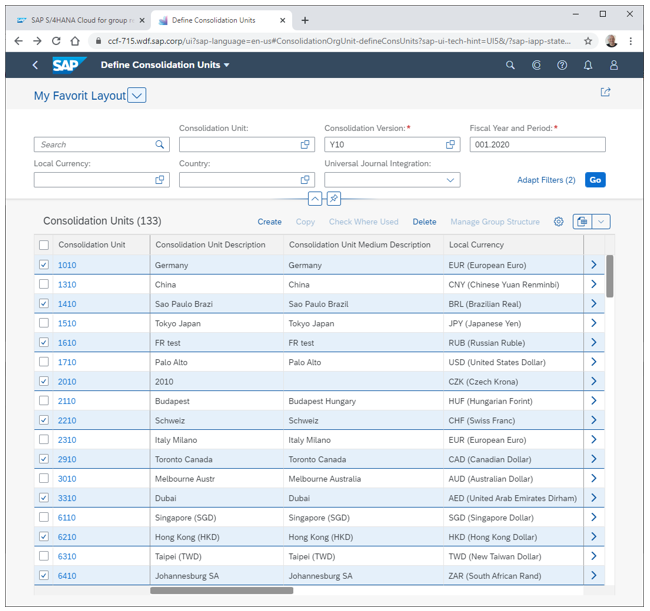 From the list you can create, update, copy, export to / import from Excel and delete one or several consolidation units. When deleting, a “Check Where Used” is performed and only consolidation units that are not used anymore are deleted. In case at least one of the selected consolidation unit could not be deleted, a popup with further information is shown.

From the list you can go to the “Consolidation Unit Details” to see and manage its comprehensive information and attributes, as displayed in the screenshots below. 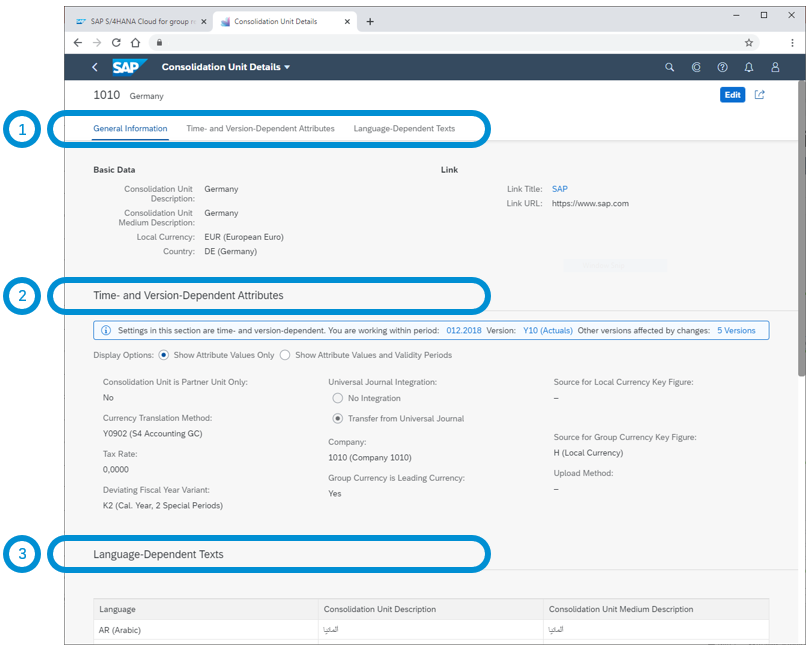 For more transparency, our new Fiori app has separate sections for all dependency types. All attributes within a section follow the same dependency type, which is also made transparent in the section header (see “1” in the screenshot above).

Also, short and medium description of a consolidation unit are language dependent. This is not visible in the old web GUI based app. The new Fiori app has a section which shows descriptions in all maintained languages (see “3” Language-Dependent Texts in the screenshot above).

The following other change is also available in the 2008 release: Removal of consolidation ledger.

For more information on our S/4HANA Cloud for group reporting 2008 release, you can refer to the following:

Would you like to be informed of the latest news on our next-gen consolidation software, you can follow the tag SAP S/4HANA Finance for group reporting on our SAP Community.

You can also co-innovate online with ourselves in the SAP Product Engineering team by joining us on the SAP S/4HANA for group reporting Customer Influence platform.

Thank you, Stephane!
Can we expect this functionality in SAP S/4HANA for group reporting On Premise 2009 release?

Hello Olga, most definitely yes! All new and enhanced features' code lines described here will flow in our next on-premise release (planned to be RTC early October). Just as a FYI, SAP has renamed the number version of our S/4HANA on-premise releases: the next one will be called "2020 release"?