SAP on IBM i: Time selection for System Limits option in the DBA Cockpit

Since a couple of years, there has been an option called “System Limits” in the DBA Cockpit for Db2 on IBM i that allows you to find out whether the system usage is approaching any of the various system limits tracked by the operating system.

This option has been described in a blog post with the title Analyzing Resource Consumption on IBM i via DBA Cockpit in January, 2016. That blog post mentions also SAP Note 2244176, which introduces the option and contains the correction instructions to be applied if you do not have the support package level for which the option is part of the standard delivery.

As a continuation of the topic, the blog entry with the title Alerts for IBM i System Limits describes an alerting mechanism introduced via a set of PTF groups by which the operating system can notify you when some limits are beyond 90% of the maximum value. The goal is then to avoid situations like exceeding the maximum number of rows in a non-partitioned table or table partition, the maximum index size or the maximum number of storage segments for variable-length data (as used in VARGRAPHIC, BLOB or DBCLOB columns).

During the last month and based on customer feedback, we have decided to extend the functionality in the “System Limits” option of the DBA Cockpit for Db2 for IBM i and introduce a new set of fields to the screen so you can specify the time interval for the analysis. 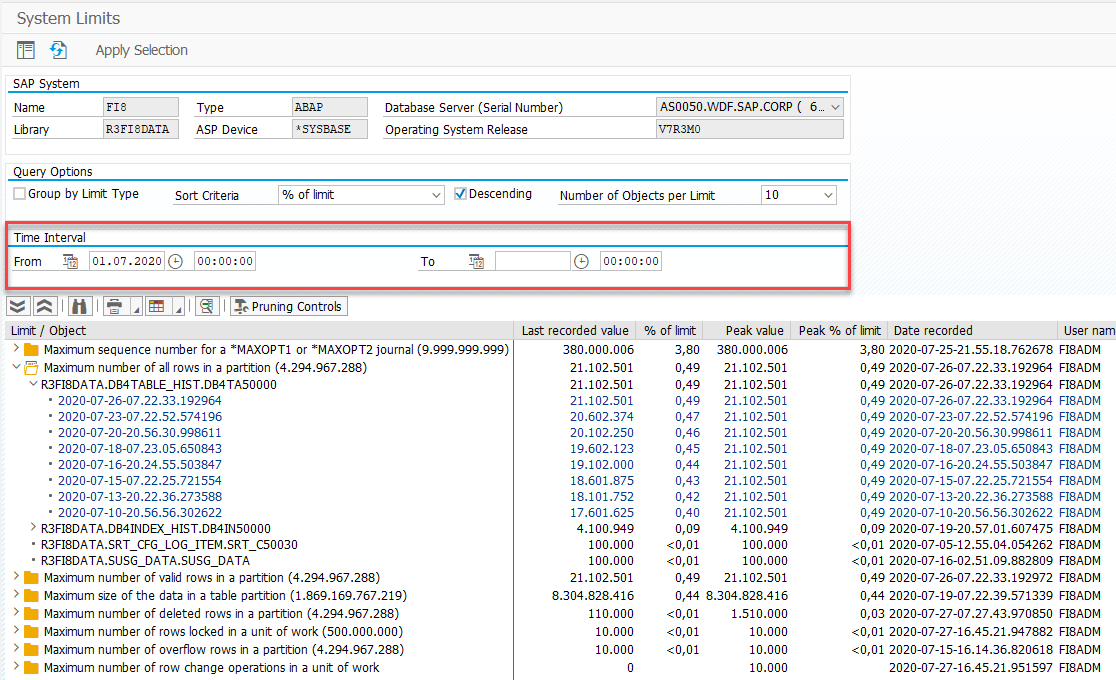 The idea with this set of fields is to define the start and end timestamp to look for records in the catalog view QSYS2/SYSLIMITS using the field LAST_CHANGE_TIMESTAMP as reference point. By doing so, you can focus on the most current tracked values and ignore entries that were created long ago and have become obsolete in the meantime.

Before the addition of these fields, it was not easy to make such analysis. The only way to ignore outdated entries was by sorting the returned data in the resulting screen by the field “Date recorded” in descending order.

If you are interested in trying out this extension, refer to SAP Note 2950162 – IBM i: Time Interval Selection within DBA Cockpit System Limits Option to check its availability and download associated the correction instructions.

We hope that this extension turns beneficial and simplify the monitoring activities you carry out.

Let us know what you think about this extension!

As described in the previous paragraphs you have with this extension more flexibility to choose the time interval for the analysis of the system limits tracked by the operating systems.