The Fiori My Inbox app comes with many extension possibilities, like showing other fields from your workflow in the master, add more attributes to the detail page,.. For advanced extensions, you can even extend the UI5 app of the My Inbox by using extension points. 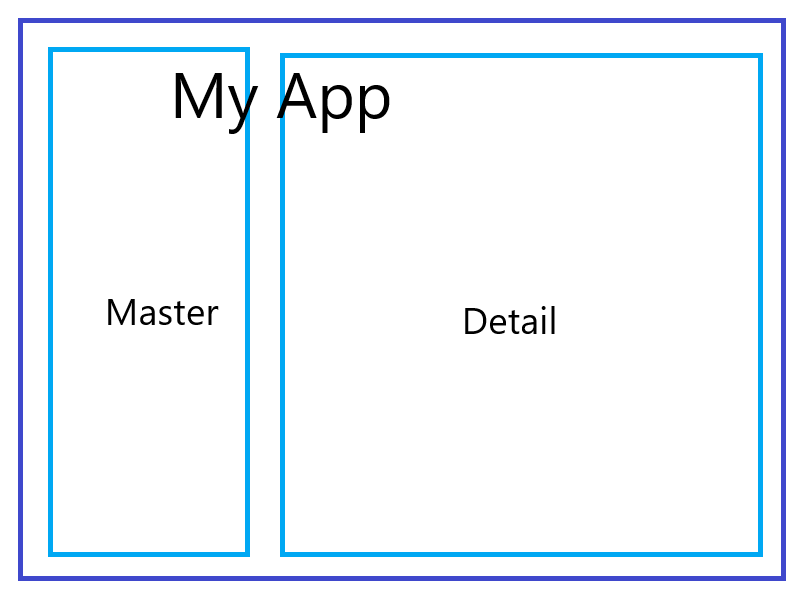 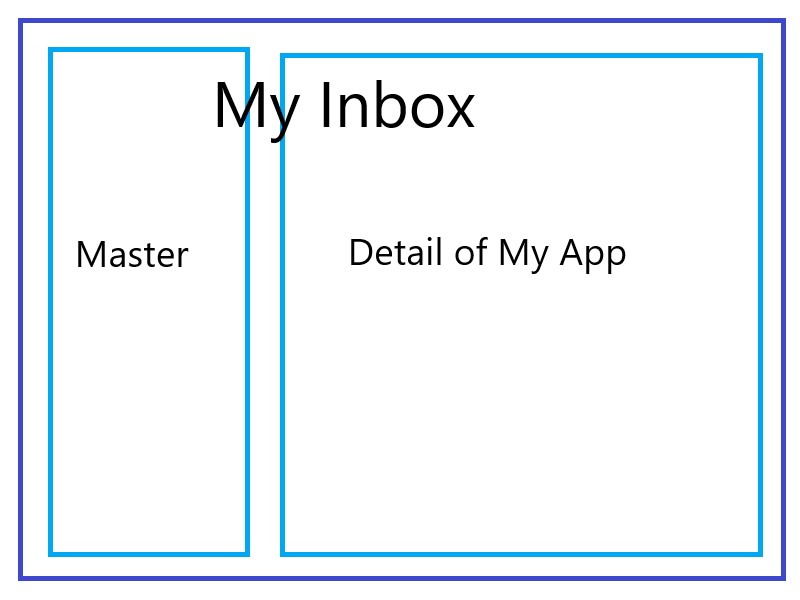 SAP provides a note to achieve this but this was not working as described in the note. Nevertheless, I was able to solve it with a few small adjustments. This is the note that I’ve used as a starting point:

In this blog post I want to share the small adjustments I’ve made because I think the note is a bit outdated and others might face the same issue.

First step, configure the workflow task in the backend system using transaction SWFVISU. This transaction contains the navigation configuration for a specific task of a workflow which will be used by the My Inbox app.

Create a new entry for your task with “Intend-Based Navigation”. This is needed for the Fiori version of the My Inbox:

Select the created entry and click on “Visualization Parameters”. This contains the navigation configuration for the “Intend-Based Navigation” of the selected task. It requires at least a “SEMANTIC_OBJECT” and “ACTION” for “Intend-Based Navigation”. The semantic object and action refer to the semantic object and action that’s defined in the Fiori configuration of the request app. I’m using the same target mapping for the app as for the my inbox.

Semantic object and action are exactly the same as in the previous configuration.

Other options are explained in the sap note that I’ve mentioned earlier.

In case  you use the same target mapping for the tile of your app, you might have to add this parameter in the tile config.

In the custom app that I want to show in the My Inbox app, I will have to define a specific route to react on the navigation of the my inbox. This route contain the path:”detail/{scenarioid}/{wfInstanceId}/{taskPath}” and the detail view as target. This is the same path that will be fired from the My Inbox when a task is selected.

This part is slightly different from the sap note. Probably because of the router changes in ui5 since 1.60 as mentioned in this blog post: https://blogs.sap.com/2020/02/05/ui5er-buzz-46-routing-with-nested-components/ 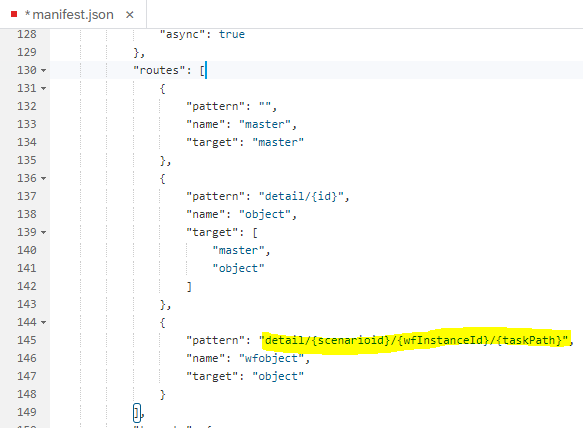 The navigation of the my inbox app will be catched in the detail controller by defining an event handler for that route based on the matched pattern.

This event handler will be able to access the parameters coming from the my inbox app by using the startup parameters. In my case this parameter will contain the id of the request which I need to get all the information of it.

At the end of the route matched function, I also add a class to the detail page to show it properly in the my inbox app.

The parameter of the config in SWFVISU will be the same in the startup parameters.

One last thing, to visualise the detail page correctly the following css needs to be added:

Result, my inbox with a detail page from another app: 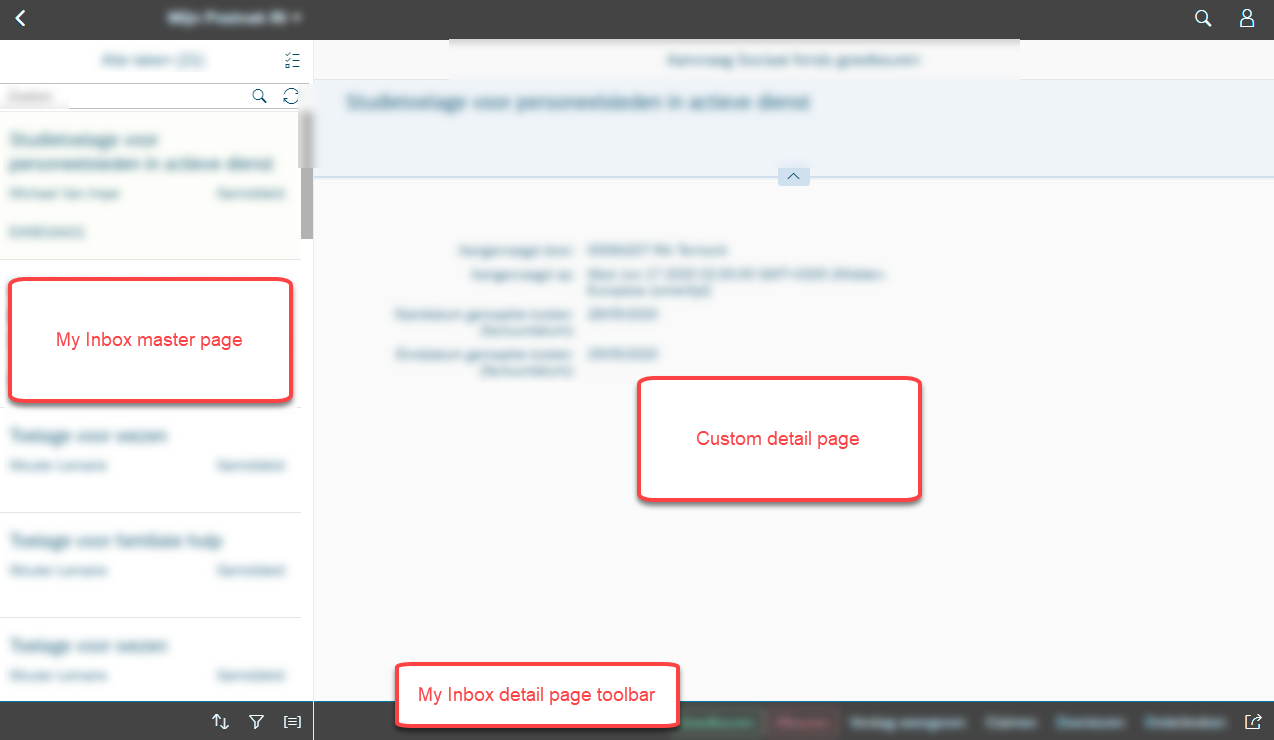 Can you show the entire detail control code and the XML for the detail view?  Great Blog and thanks so much for this.

The detail page is part of another bigger app which I’m not able to share..

Thanks for the Great blog, was very helfuly. by refering was able to integrate a custom application.

Just have few technical Challenge which i am facing for my senario, will be helful if you provide some valuable input.

Not sure, we only use it for display only. If you want to use it for changing data I would put a save button in the custom page but not change the default toolbar.

I tried to put a Button in Custom page itself but it did not completed and refesh the List in My Inbox.

So,I extended the My Inbox S3 controller method "extHookChangeFooterButtons" and made a call to custom Odata to update the Work Item and called the sendAction() method to trigger the Work Flow completion BADI extension.

In Standard My Inbox for version 1.23.21, they are calling sendAction() method in S3.controller.js for WF completion and showDecisionDialog() method for the Dialog box popup.

There is one more patter available in My Inbox for complete Detail page replacement.

"replaceDetail/{SAP__Origin}/{InstanceID}/{contextPath}" under "replace_detail" namespace, but it is triggering from Open Task button only. may be i am doing something wrong ?

Just to Corret my self, Visual paramter configuration is working for Extended My Inbox application also.

Great! Thanks for sharing, it worked for me.

Do you know how to do the same thing in BTP My Inbox app?

Is it possible to use that scenario for a Fiori Elements application with jumping directly to the Objectpage?

My stand alone App is working fine so far (providing a key in the url for skipping the List Report). How can I achieve that in the MyInbox custom detail page?

In theory it should work exactly the same but haven’t tried it myself. Fiori elements might be a bit more complex…

Thank you for the fast reply! The configuration in SWFVISU is working so far, the target mapping also. Whats missing is the direct routing to the object page. Do you know how to achieve that with OData V2? In your example, the routing is based on xml views with a path, which I guess I don´t have with the sap.suite.ui.generic.template. Do you have any example or solution for this? Can´t find any helpful documentation or blog entry. 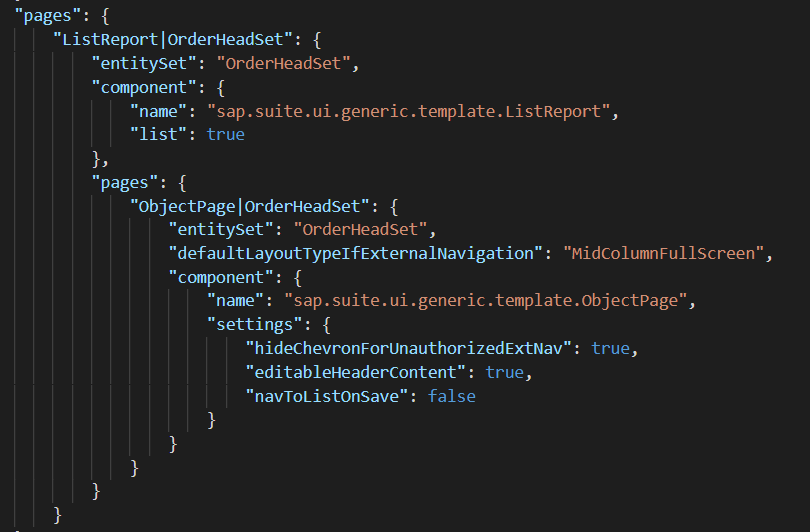 Interesting question:) You need to have a route in your app exactly like I defined in the blog post otherwise it won’t work. Fiori elements generate the routes based on the config and I don’t know if it is possible to change the standard routes.

An idea that I’m thinking of but not sure if it will work would be to create a complete custom app which you use as a proxy app for your fiori elements. In this custom app you can define a custom router. In the onRouteMatched event handler you load the fiori elements as a component in your custom app. You should be able to pass workflow properties when loading the component to the fiori element.