I would like to propose a new design pattern for organizing ABAP OO development and unit testing in a universal way.

It has the following important features

What can it do

Before diving into the theory parts, let’s have a visual view of the usage of this design pattern in programs and classes.

The usage of the factory class

One entry for table ZANDERS_IF_IMPL

There is a universal BADI ZANDERS_IF for run time class name determination. 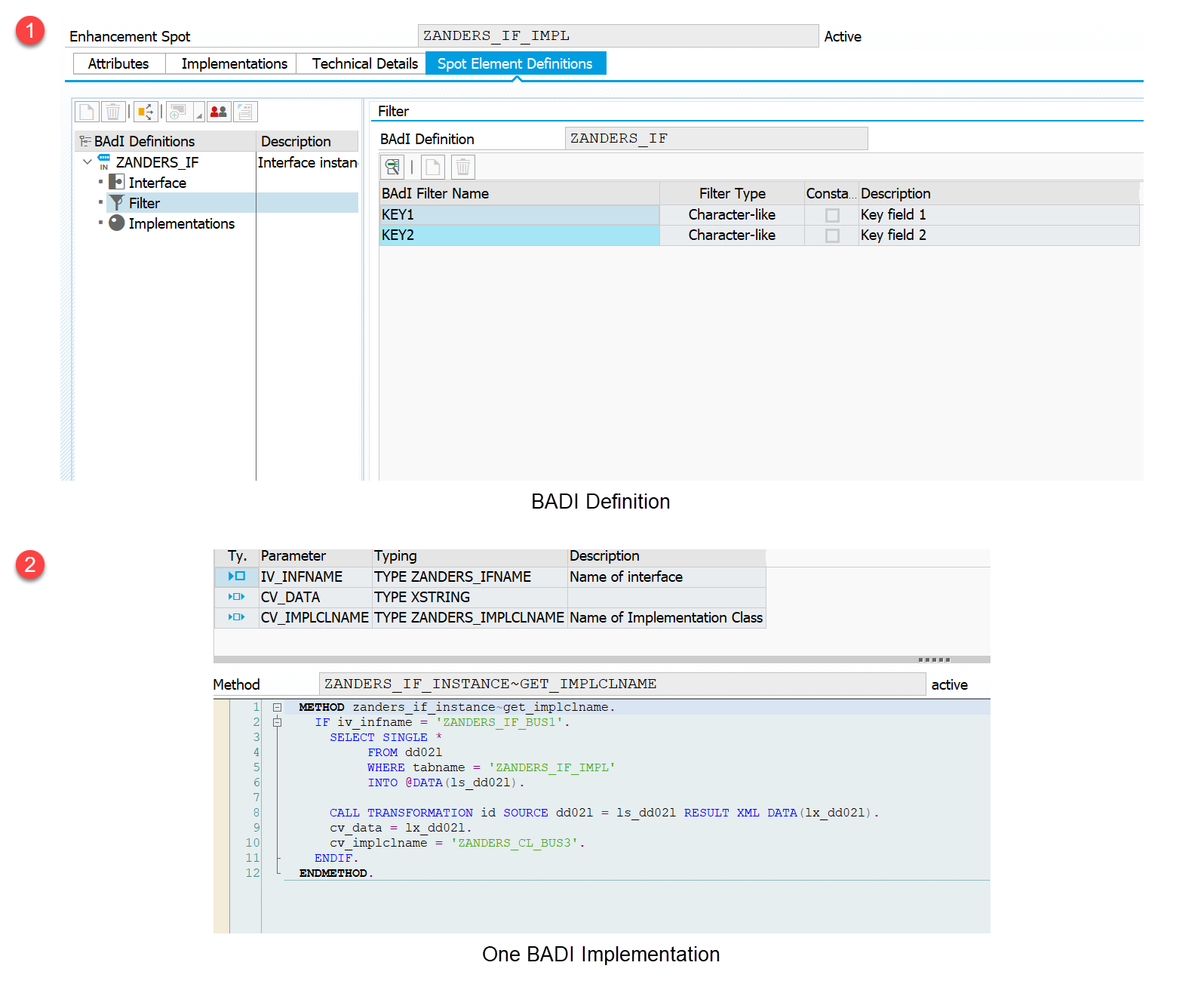 When running the program ZANDERS_TEST_BUS1.

There are three sets of data to demo the functionality of the factory class ZAND_CF_OBJECT.

Take the first set as an example.

When the debugging window shows up, we will see the class name for the variable lr_bus1 is ZANDERS_CL_BUS1.

The behavior for this program is that for the same interface ZANDERS_IF_BUS1, with different data sets there are three different classes can be used:

This feature gives amazing flexibility to customizing your coding logic based on the attribute of data.

The usage of the injector class

There is a class ZANDERS_CL_BUS1_ENH, which uses the interface ZANDERS_IF_BUS1.

In the method MY_DISPLAY, there is a local temporary usage of an interface instance.

If you have experience in unit testing, you will know the problem here.

For using test double, the local object has to be upgraded to a class-level attribute.

When implementing the unit testing, you have to go back to your real coding to do some changes.

Do you have such an unpleasant experience?

However, for this class, the strange thing is that when you perform unit testing, it passes successfully.

The secret is the usage of injector class.

This feature saves you the trouble of returning to modify the coding when creating unit testing.

Now it is time to see the theory part.

The following picture shows the architecture of this design pattern. 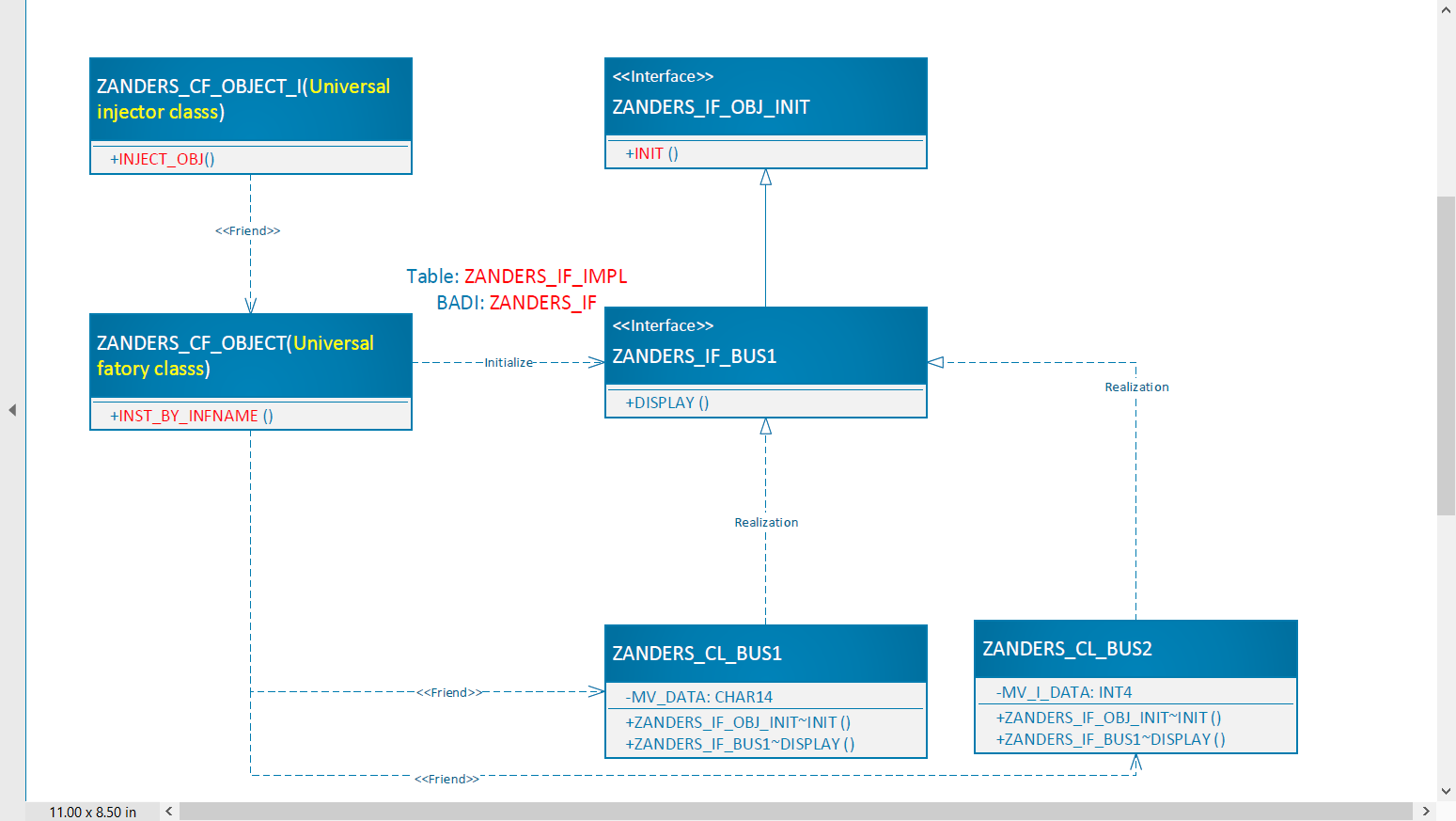 Let me explain the design by starting from the beginning point of a real coding process.

There is a requirement to display business data.

So an interface ZANDERS_IF_BUS1, which has only one method DISPLAY, is created.

This interface should include (inherit) the universal interface ZANDERS_IF_OBJ_INIT, which is used to initialize the class object.

Normally, the next step is to create classes that implement the interface.

So three classes are created(only two classes show in the above picture as the limitation of Visio page size).

There are three rules for the class:

Take the class ZANDERS_CL_BUS1 as an example, its configuration is as following picture shows.

Finally, let’s use these classes in a program ZANDERS_TEST_BUS1. 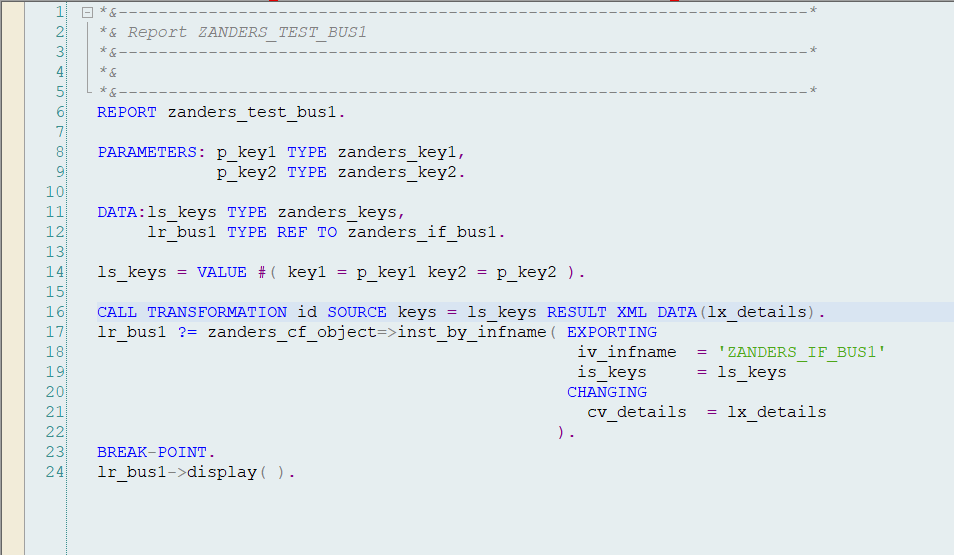 In line 17 there is a call to the static method: zanders_cf_object=>inst_by_infname

to get the interface instance.

This method has three parameters:

Here, for simplicity and generality, I only use two components KEY1 and KEY2 to represent key fields.

Note that this is a changing parameter.

It means it is possible to change the initialization data as needed.

Let’s go into the coding details of this method.

The logic can be divided into two parts:

It has three steps to get the class name.

when the class name is determined finally, the instance will be created in line 34.

In line 35, the interface method ZANDERS_IF_OBJ_INIT~INIT will be called to do the initialization for the class instance.

When using BADI ZANDERS_IF, you can not only determine the class name but also change the initialization data cv_details.

Running program ZANDERS_TEST_BUS1 with KEY1 = 1, KEY2 = 3, you will get a clear view of how this BADI works.

Components of this design pattern

The required developing components for this design pattern:

Its key fields have two parts:

How to apply it

If you would like to apply this design pattern to your application, please follow the following steps.

This design pattern is based on two common object-oriented technologies,i.e., interfaces and factory class.

It also combines the ABAP programming feature to provide a universal and flexible way to choose the right run-time class.

It provides a universal way of injecting the test double interface instance to make your unit testing work easy.

Finally, I hope you have understood it clearly.

I proposed a similar idea once in the following blog

I was not thinking about unit testing at the time, just a way to create the correct subclass based on dynamic business variables, just as you are doing.

Early in 2018 I followed the SAP online course about unit testing which was wonderful. They suggested using "dependency lookup" in your productive code so as to make unit testing easy.

To me that was a fantastic idea. I started using it the next week and have never looked back.

I would be really interested in your opinion on both of the concepts in the blogs I have put links to in this comment,

After reading your design, I have two questions:

For the factory pattern in https://blogs.sap.com/2017/04/17/charlie-and-the-chocolate-factory-pattern/.

If I understand correctly, every class should implement the method ZIF_CREATED_VIA_OCP_FACTORY=>IS_THE_RIGHT_CLASS_GIVEN to achieve dynamic class determination.

Question 1: It seems to move some factory class functionality to the interface implementation class.

For the factory method ZCL_OCP_FACTORY=>RETURN_OBJECT_GIVEN, the parameter IT_CONTEXT_DATA is used for candidate class check.

Question 2: It seems there is no parameter to do the initialization for the class.

How to initialize it?

For the first one - the question is how a concrete implementation of a class should describe its' single responsibility. You could have a configuration tale to say what class looks after what, but it just seemed right tome to have the class itself say what it does. You could have each concrete class have public constants to describe the area of responsibility, but I tried to make it as flexible as I could. There may be a better way, I am sure there is, and if so I would love to know what it is.

For the second one - in subsequent iterations I discovered the need to pass in a parameter table if the constructor requires such. Or maybe you means something else by initialization?

BTW I use such a factory in real life and it is so easy just to create a new country specific subclass and not have to change the core application in any way. I did that just last week and am always amazed at how easy it is.

Thanks for the answers.

There are a variety of methods for implementing the factory design pattern.

It is up to the developer to choose the loved implementation way.

you have given answers very comprehensively to every question 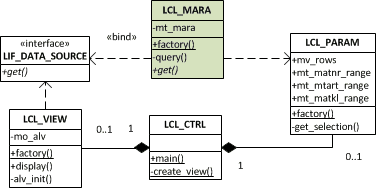