This blog is to explain one of the standard features of Position management settings in Success factors – Transition period. Essentially, a transition period occurs when an employee leaves a position and a successor is appointed to that position before the incumbent leaves it. This means that the position is overstaffed for that time. The transition period can be either defined globally or in position types. However, if you have defined in both the places, the global setting will override the position type settings.

There are 3 different scenarios that are being covered as part of this blog. They are,

As I mentioned earlier, the transition period can be defined in position types. 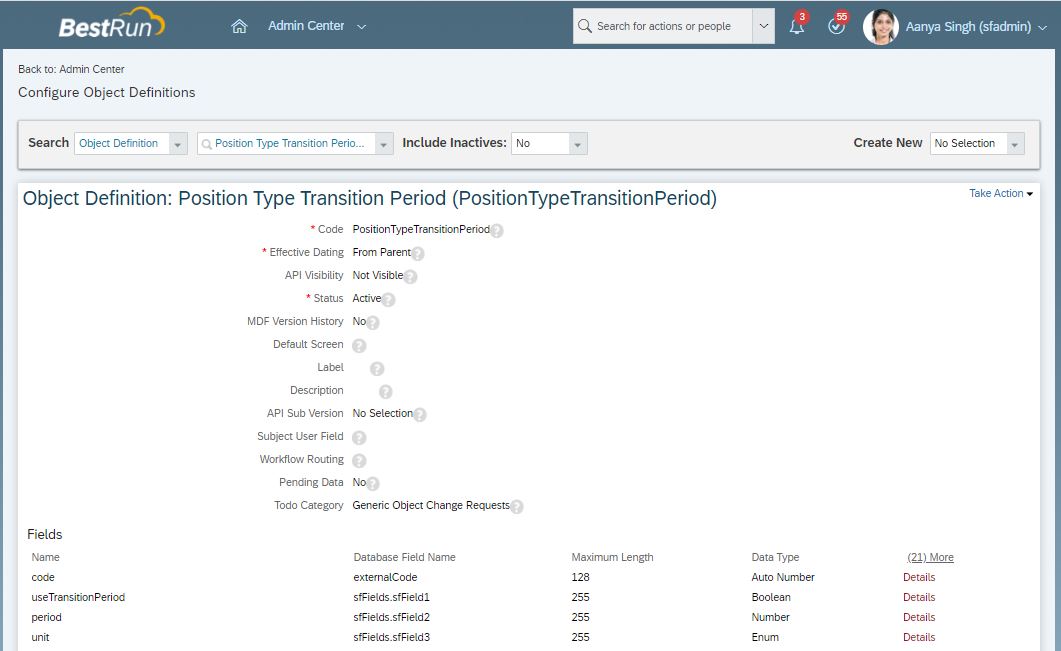 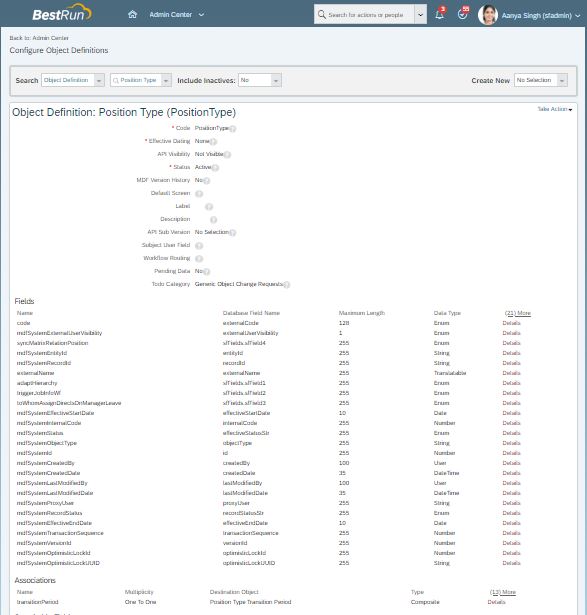 The transition period for the respective position type needs to be defined in the manage data > position type.

There is an option in position management settings > UI customizing > Allow selection only of positions that have the status to be hired in MSS job information and hire, this needs to be set to No to be able to display the position in the job information UI/Hire UI. I understand that this is one of the most important settings where the customers will feel that all the positions are getting displayed in the job information, although it is occupied. To overcome this scenario, we need to acquire SAP Best Practices, where the position can be restricted to be able to view within their Legal Entity/Line manager hierarchy. The Line Manager hierarchy scenario can be achieved through business rules and RBP. The same has been explained in detail here. 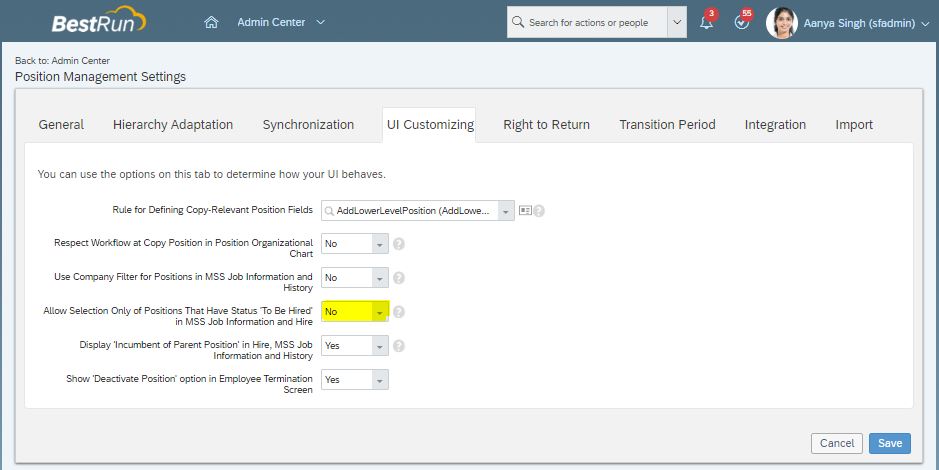 Alright, let’s see a scenario where the transition period is enabled in the position type (regular position) for 1 month. A regular position is used with 1 FTE. Terminate the incumbent in the near future (within 1 month period) and make sure the workflow is approved. 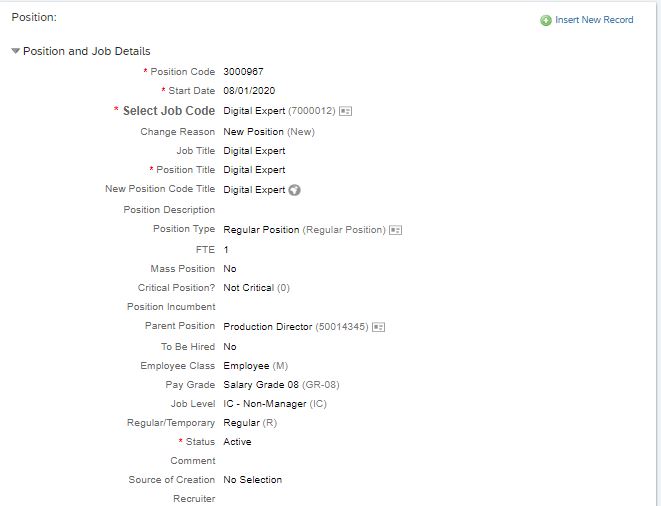 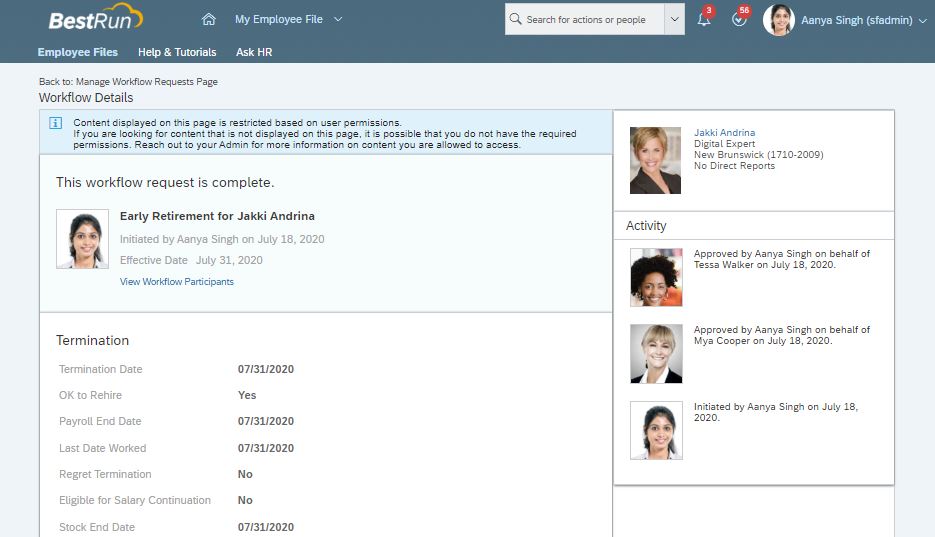 Hire a new employee in the same position. Also, check if the company which is selected is the same as the company that has been defined for the position.

Once the new employee is hired, the position org chart will be shown as overstaffed. 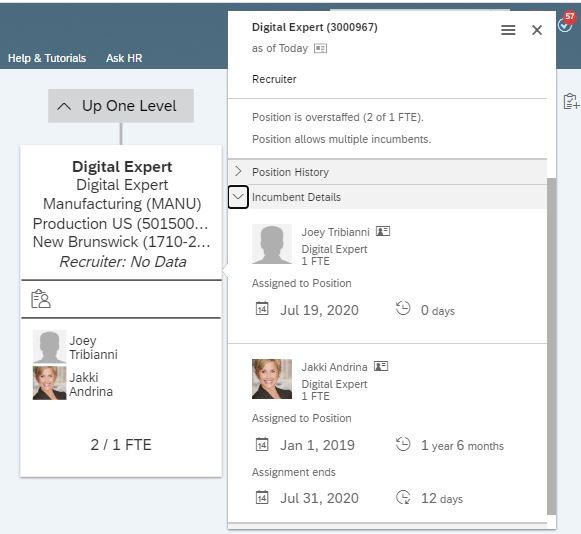 Since it is a Regular non-mass position with 1 FTE, it will not be available for further allocation of employees through job information / Hire UI.

Let’s take a regular mass position with 2 FTE. Terminate the incumbent and approve the workflow. Assign a new employee to the same position. 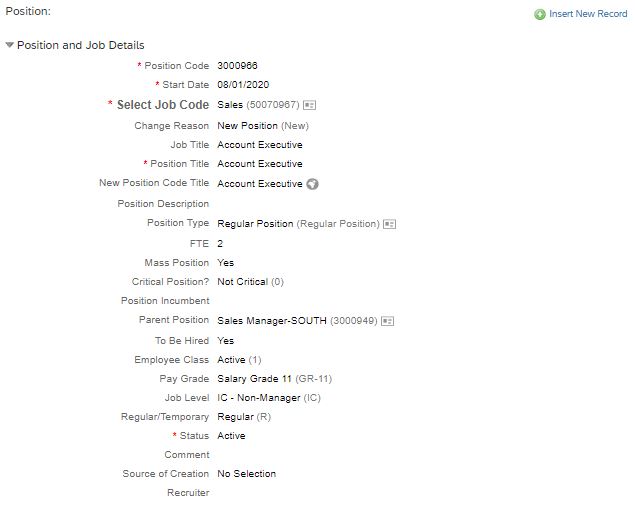 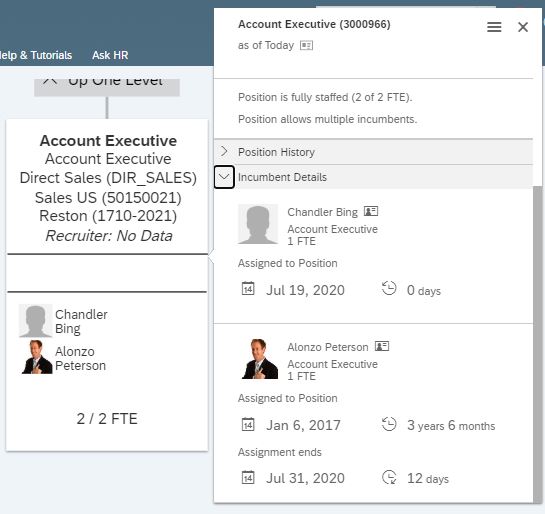 Since it is a mass position, the system will allow further incumbents to the same position. 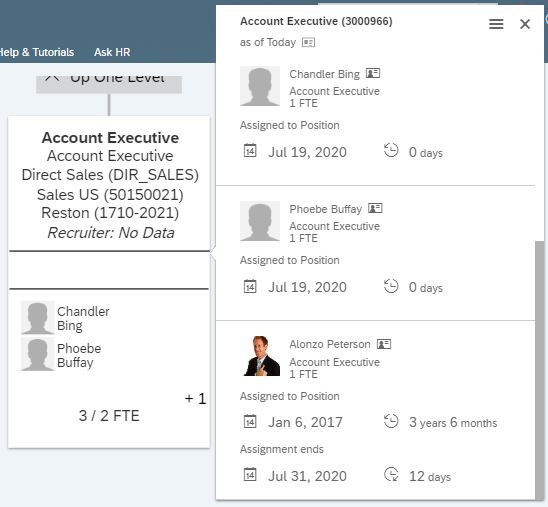 To overcome this, we may need to use the standard field position control in the position MDF object. 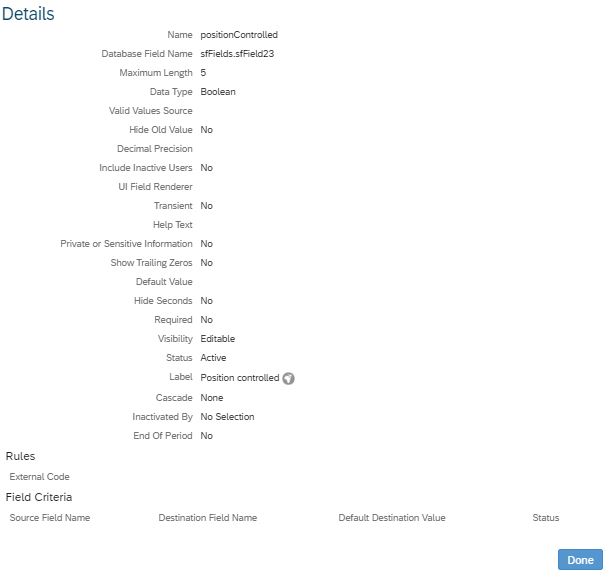 Once it is enabled, the position will not be available for further allocation of an employee. 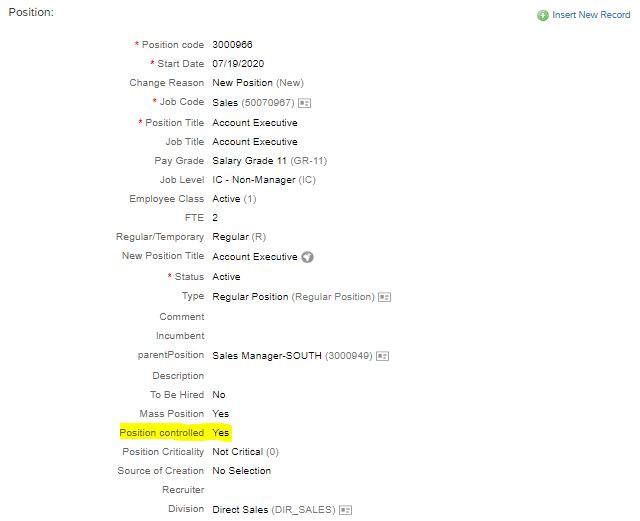 The position control field is to restrict the target FTE based on the FTE defined in the position. It should be ideally used for mass positions.

Let’s see how the transition period works for the managers who are leaving the organization. A regular non-mass position with 1 FTE is used. If Mr. Thomas Lin is leaving the position, what will happen to his direct reports?

When we terminate a manager, the system will pop up with an additional option to have direct reports and job relationships to assign to someone.

Well, Mr.Thomas is terminated in the system and the workflow is approved. However we have selected Mr.Thomas’ direct reports to be reported to his position hierarchy, but the system is again allowing us to make a decision while hiring a transition incumbent. I have selected direct reports to stay with the current manager. The current manager is Mr.Thomas’ manager – Ms.Monica. This is purely based on the HR/organization to decide.

Alright, the direct reports are now reporting to Mr.Thomas’ manager Ms.Monica Chen. However, the system detects that there is a future change in Mr. Thomas’ position and suggests a supervisor change based on the automated daily hierarchy adaptation.

The Automated daily hierarchy adaptation works when the hierarchies are out of sync. In this above example, Mr.Thomas’ direct reports are now reporting to Ms.Monica although Mr.Thomas’ position has got an incumbent. In order to fix these inconsistencies, you have to schedule a job that will set the correct supervisor based on the position hierarchy.

The above blog covers the different transition periods with regular position scenarios. The same applies to the shared position as well. However, there may be some exceptions to be considered like Workflow for direct reports, the terminated employee plans to revoke his/her termination before the last date of leaving.

The workflow will get triggered based on the org chart and the supervisor, which is currently assigned in the employee profile of the direct reports. Therefore, the existing workflows of the terminated employee should be manually transferred to the desired employee. Additionally, if the workflow has been configured based on the position relationship, the workflow will get triggered to both the employees assigned to that position, which will again need a manual intervention to resolve.

To conclude, the transition period will give you the benefit to hire a successor before the terminated employee leaves the organization. However, some of the exceptional HR scenarios need to be handled manually.

We will see the other scenarios in Part 2.

Hello, thanks for this article, very informative 🙂

I have one issue that we would rather solve before enabling Transition Period... You mentioned the need to turn off Allow selection only of positions that have the status to be hired in MSS job information and hire. I checked the article related and did not notice how it can get me only the available positions during hire process - it only mentioned limiting access to direct and indirect reports.

Is there any solution to make sure the manager gets to choose only from unoccupied and transition period positions? If not by only providing the list of available positions then maybe by some additional data/description showing the status (FTE used?) of positions from which they choose?

Thanks for your comment. The Allow selection of a position checkbox is based on the 'To be hired' status of a position and it will display all the position regardless of the incumbent occupied/FTE. However, there are two hard stops for managers that I would suggest, the one is based on company filter in the position management settings and the other is to restrict the position based on his/her hierarchy through RBP.

Nicely written. Thanks for sharing

Very insightful article. Thank you for sharing this.

Thank you for the article, very informative 🙂

Do you know if by any chance there are terminated employees in the system and you activate this transition period feature the termination record gets deleted?

Thanks, Emese. The terminated record will not get deleted in such a case.

Hello! I have one question, what about job relations? if when I terminate a manager he also is a matrix manager of someone else; the bizX job will update the the manager of direct reports, regarding the fact that we assigned someone different on the termination.

Will it do the same for job relations?

The system will automatically take the manager's manager as the new matrix manager.

Thanks for the great blog. I have a question, does it work for position holder leaving for any reason (transfer to any other position etc.) or it works only on Leaving from the company?

It does work for transfer to any other positions as well.

Thanks for this informative blog, i have a question -Transition period is enabled, workflow is approved for the terminated employee, while hiring a new user , we have to set the vacant flag to as Yes from  the date of hiring , is this a  known behavior? While we could see position is set to vacant with employee's termination date +1

so suppose transition period is ON with 30 days period, 30th June is LWD ..so effective 1st July position is vacant. but to use transition period, we hire on the same position (employee serving NP) of an employee between 1st June to 30th June  which is still occupied, position doesn't appear  and we have to manually set the position vacant date to June 8 which was earlier 1st July ( upon termination WF approval). i dont think we should have this manual activity of setting the changes, or is i am missing something.

When transition period is ON, you should be able to assign a new employee to the same position without having the position set to vacant between 1st June to 30th June if WF is approved. Check if the below is enabled.

There is an option in position management settings > UI customizing > Allow selection only of positions that have the status to be hired in MSS job information and hire, this needs to be set to No to be able to display the position in the job information UI/Hire UI.