Deconsolidation Is one of the first processes in EWM which someone learns. But still many struggle with this when they try to go in detail. Eve I faced some issues, so thought to write a blog to help everyone.

Mostly at the time of deconsolidating, the Deconsolidation work center is given as default step in POSC – Process Oriented Storage Control.

By doing this, consultants make the mistake of, Kind of hardcoding the system, hence ruining the system of its flexibility.

For Example, During Inbound, after unloading if the HU has to move to Deconsolidation work center, then this decision should be taken by the system itself. This should not be decided by the configuration in POSC.

The following screen shot shows the destination bin given in the POSC.

But the following setting “Rule Based Determination of Destination” should be done so that destination is not hard coded but rather it is determined by the system itself.

Rules-Based Determination of Destination should be check marked.

The Deconsolidation work center will be determined automatically if one of the following condition is true.

Standard Feature of Deconsolidation does not allow you to repack the quantities into smaller quantities.

Even if you try to change the quantity. This will not allow to proceed. 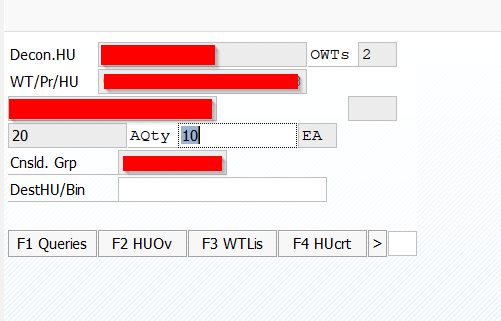 Once you keep the quantity same. It allows to Deconsolidate the Product into different HU. 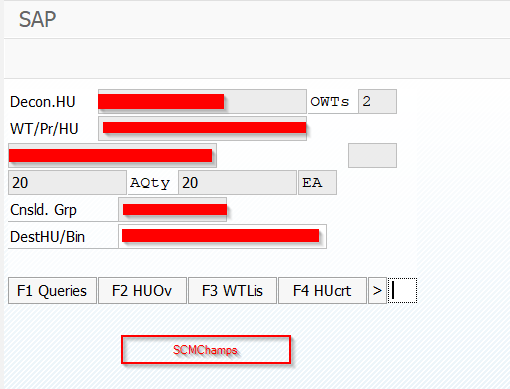 If the same quantity needs to be deconsolidated and repacked into smaller quantities in RF, then the screen has to be enhanced.

But repacking can be done in the desktop transaction rather than RF.

Go to transaction /SCWM/DCONS and fill your HU in selection screen. The following screen will appear.

On the Subsequent Screen under Deconsolidate Subscreen, fill Packaging material and Source HU

After Pressing Enter, Following Message will appear. Press NO

Click on the Warehouse Task Button and the following screen will appear. Select the Line Item and Press ok. Now fill the quantity which you want to repack.

After filling the quantity, press Execute button and system will repack the product into different HU.

By following these steps you’ll be able to deconsolidate as well as repack the HUs. Stay tuned for more blogs.

Is it possible to create a program to read an excel document, and for each line and run /SCWM/DCONS and update Details2.. in a massive way?

I tried to create a batch input program in SM35, and doesnt work.

Is it possible to have a way that automatically update massively this info?